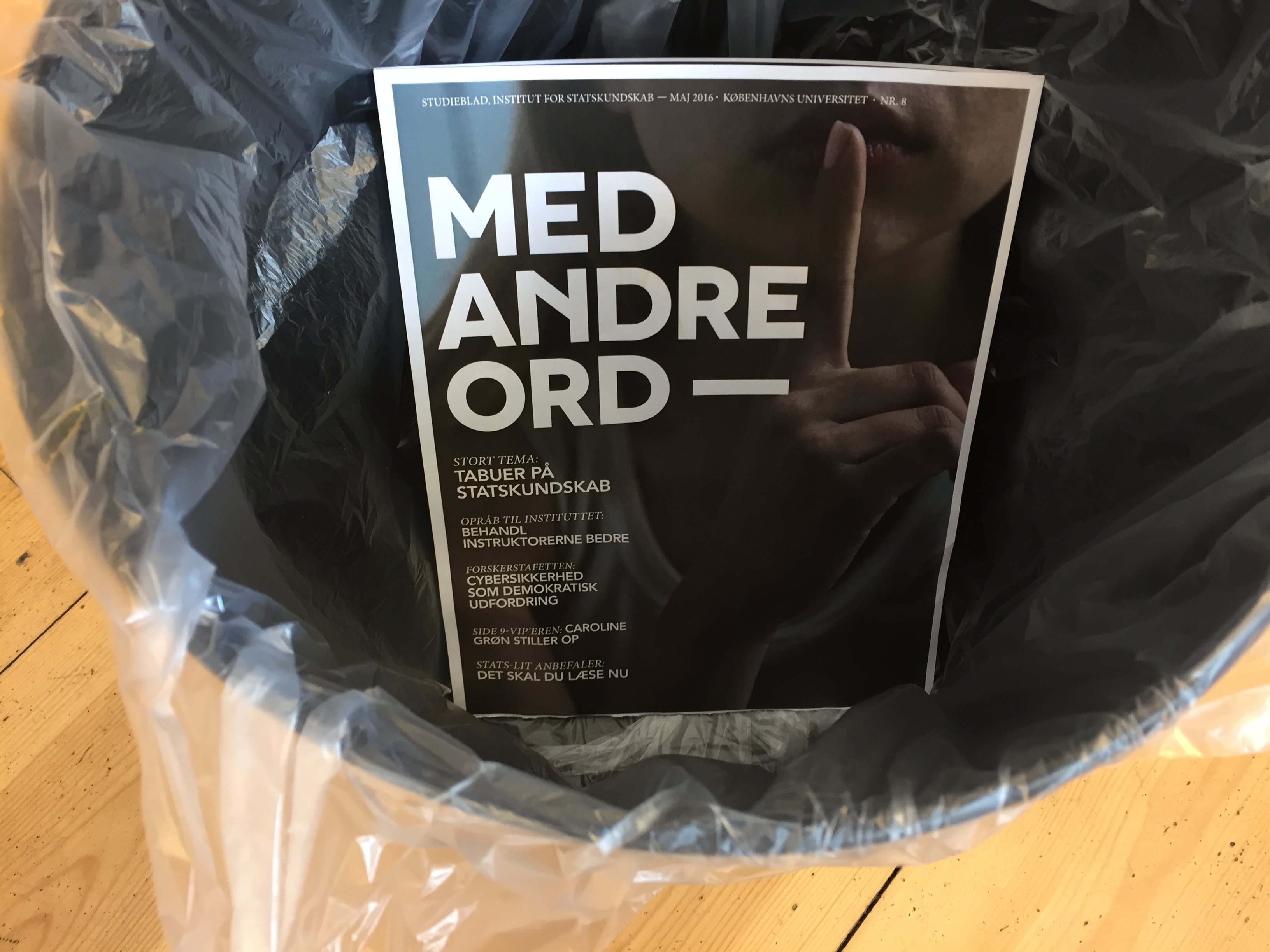 Med Andre Ord [In Other Words] has until now appeared in print twice a year. The department has withdrawn its DKK 100,000 annual funding, and editors are now trying to raise money through advertising and a UCPH study environment fund so that the magazine can live on.
image: Dennis Christiansen

Downsizing — Due to cuts, the Department of Political Science is dropping all its support for the biannual student magazine 'Med Andre Ord'. The editors hope that the magazine can continue with funding from a UCPH study environment fund and from advertisers.

Last year, the magazine IPmonopolet was told that their budget would not be approved by the study administration of the Department of Political Science, which had previously supported them financially. Now it is the turn of the student magazine Med Andre Ord which due to cuts at the department has had its DKK 100,000 a year financial support removed.

Head of studies at Political Science,  Anders Berg-Sørensen, is sorry the department has had to withdraw its financial support for the magazine.

“As a part of the general cutbacks at the department, we have been forced to withdraw support. This is a shame because they have contributed to an active and vibrant study environment where the students have found their own niches. They have put a lot of effort into making this magazine, so I hope they will find another way to continue their activity.”

Med Andre Ord has been published twice a year since 2013 and is produced by two editors and a group of more loosely affiliated members. The editors have no intention of giving up. They are recruiting new people and trying to find out whether the magazine can be published in the future with support from funding pools etc.

“At present we do not know whether we will get any money from the department in the future. We have previously received a high amount of support for things like layout and paid part-time editor jobs. But we understand that we will be hit by the cuts at the department. That said, we cannot publish the magazine with no money, so we hope that we can continue to get a small contribution in support – something that we also believe the department can afford.”

“Now we have applied to the study environment reserve fund and hope that it can finance the magazine together with ads. But it is all about ‘the art of the possible’ in terms of what is financially feasible,” says editorial member Emil Sikjær Schlosser.

He stresses that the student magazines have an important role to play for both students and staff at the Department of Political Science.

“The study environment will live on without us, but the magazine has been the only organized public forum where people were able to discuss, for example, the future direction of the study programme and jobs. So it’s a shame if this forum disappears. “