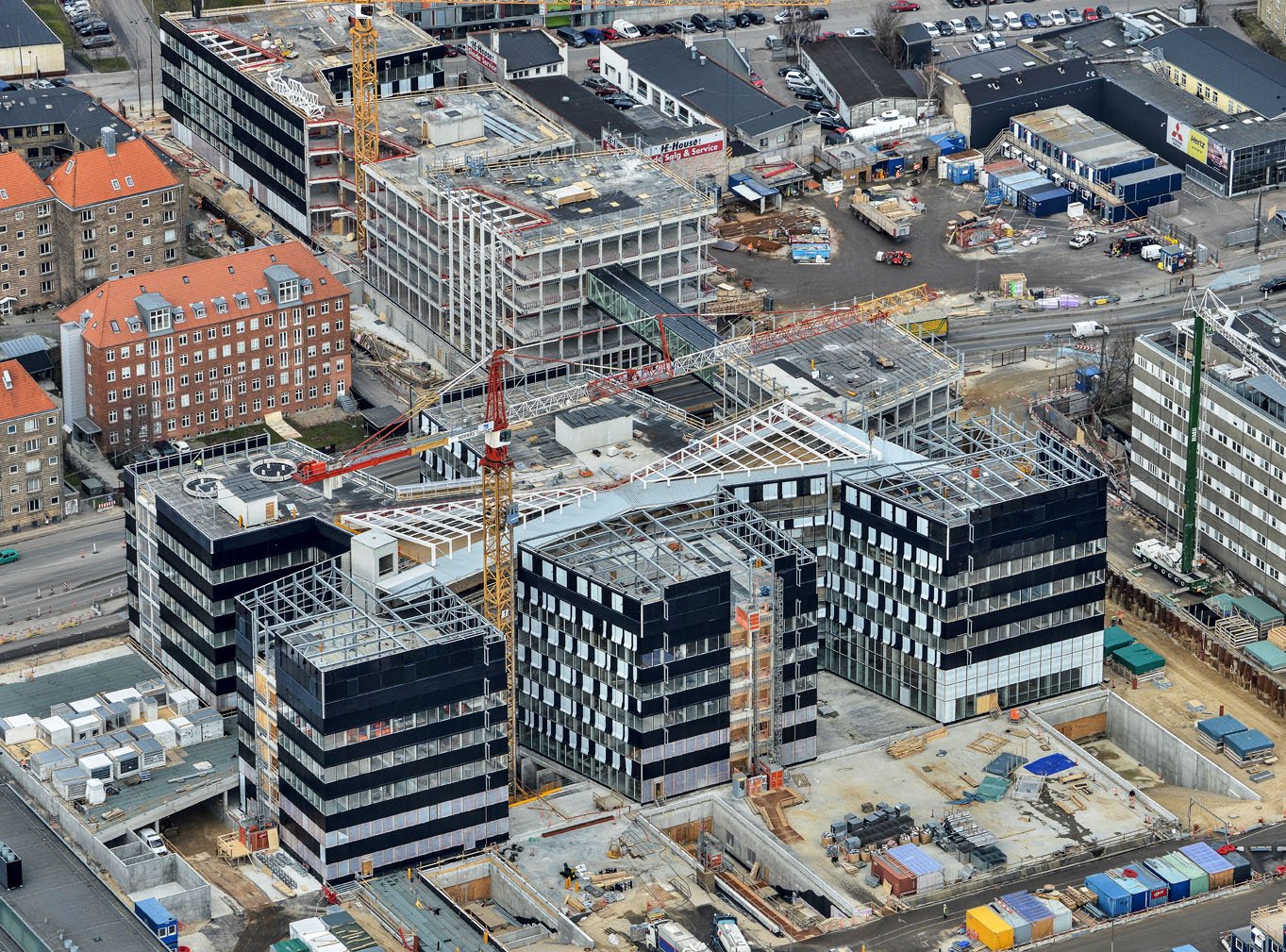 The Niels Bohr building had its topping out ceremony in April 2016. Now the project is to be delayed by at least one year.
image: Dragør Luftfoto - Bygningsstyrelsen

Construction — The Danish Building and Property Agency blames the now sacked subcontractor for the indefinite postponement of the DKK 1.6 billion Niels Bohr Building at the University of Copenhagen. UCPH director and dean predict that the delay will be costly.

The Niels Bohr Building – the largest of the new Faculty of Science buildings at the University of Copenhagen – is in difficulty.

Will accommodate a large part of UCPH’s science laboratories, and is the “Danish Building and Property Agency’s largest building so far,” according to the agency. It will have 52,000 sq m floor area.

The construction which costs () DKK 1.6 billion should have, according to the university’s project website, been made available for use from the turn of .

Later, this date was moved forward by one half year to the summer of 2017. The latest news is that the project, according to its developer the Danish Building and Property Agency, will be delayed at least one year.

In fact the agency no longer indicates any precise date for when the building is expected to be ready. According to the agency’s website the Niels Bohr Building will just be ‘in use’ at a non-specified time in 2018. 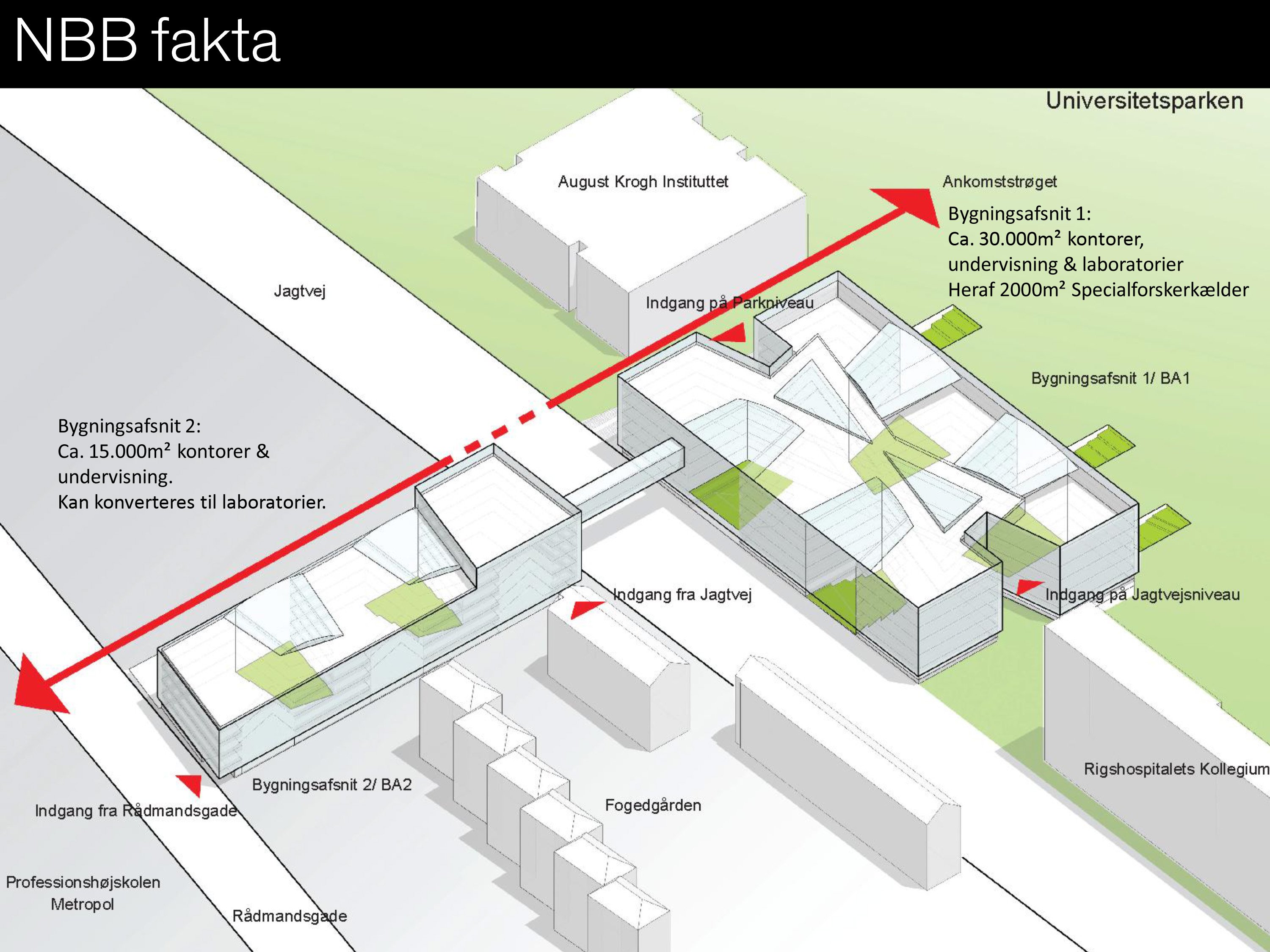 (See also aerial photos of the building in February 2017 on the Danish Building and Property Agency’s website).

According to the Danish Building and Property Agency, the problems derive from a subcontractor, the Spanish company Instalaciones Inabensa which the agency terminated from its contract on 10th February 2017 – that is after the building should have been ready.

When you pull a contractor out of the job, it indicates that something is wrong, otherwise you would go to great lengths to find an amicable solution

The Spanish company should have done the extensive plumbing and ventilation systems in the Niels Bohr Building. Insabensas parent company went bankrupt in 2015.

According to the trade magazine Ingeniøren Inabensa’s part of the project was worth more than DKK 200 million – a project that is now to be taken over and completed by others. According to the news site Licitationen, Inabensa has in turn protested against it being sacked from the project and set its lawyers on the Danish Building and Property Agency.

According to the agency, Inabensa had prior to this been given a chance:

“The agency has for some time been in dialogue with Inabensa Denmark about the dubious progress and the failures in terms of the quality of the work without this having led to any changes or to Inabensa Denmark making amends. The agency has as a consequence lost confidence in Inabensa Denmark and in the work being completed within the framework of the agreement with respect to both time and quality,” the agency writes in an e-mail to the University Post. And further:

“It is in view of this, that it is not possible at this stage to provide a more precise time for completion of the construction in 2018.”

“When you pull out a contractor, it indicates that something is really wrong, otherwise you would go to great lengths to find an amicable solution,” he says.

UCPH director: We are in trouble

According to University of Copenhagen management it is a problem that the Danish Building and Property Agency projects at the university turn out to be more expensive than planned, and that they are delayed.

“We really regret the developments in the construction area. This is going to cause us problems,” says Jesper Olesen, Director of the University of Copenhagen.

“First, we have a time problem as people will have to be in other rooms while it is being built, and there is no space. But we also have a financial problem if the buildings cost more than budgeted, as it results in a higher rent. If we spend money on rent, we cannot use it for other things we would like,” he says.

According to the Dean of the Faculty of Science at the University of Copenhagen John Renner Hansen the delay will cause inconvenience for researchers, technicians, administrators and students, and will mean that the faculty may have to delay other construction projects and relocations:

“We need about 52,000 sq m of modern research and teaching facilities. The Niels Bohr Building is to give a much-needed quality improvement in infrastructure to chemistry, physics and natural science didactics. Good infrastructure is a competitive parameter internationally, and this is something we unfortunately now have to wait to gain the benefits from,” he writes in an email to the University Post.

Jesper Olesen recalls that University of Copenhagen management has  questioned the present building system, where the Danish Building and Property Agency makes decisions on construction projects at the university, while the university itself covers the costs – including possible agency mistakes – in the form of rent.

Disputes over all the major UCPH construction projects

The Danish Building and Property Agency will not, or cannot, say what the expected total budget for Niels Bohr Building is expected to be.

The University Post has requested access to the building’s finances under the Freedom of Information Act. The agency writes in its justification for failing to disclose the number that there is a dispute with one or more of the companies in the contract, including most likely Inabensa.

It can be seen in a report from the agency to the University Post that there are pending disputes in all of the five major construction projects which the agency is currently responsible for at UCPH. It includes (in addition to the Niels Bohr Building), the Maersk Building, KUA3, Copenhagen Plant Science Building 1 and the Pharma Science Building.

“We really regret the developments in the construction area. This is going to cause us problems”.

Jesper Olesen, Director of the University of Copenhagen.

The question is whether this is a usual occurrence.

“There are legal disputes in construction, but it is not as if each or every other project ends up as a legal dispute,” says senior researcher Kim Haugbølle.

“But there are many types of disputes, and most are resolved across the table with a compromise. It is rare that things develop into expensive and cumbersome arbitration. Some years ago we examined disputes in the construction industry and found that in about half of the cases disputes occurred, but that in most cases they ended in some kind of agreement. Only a few cases end up in legal dispute and arbitration.”

The Danish Building and Property Agency must submit cost overruns of more than 10 per cent of the budget, or DKK 10 million, to the

Private sector not necessarily better at keeping to budget

Kim Haugbølle says he does not have the impression that the Building and Property Agency asks for supplementary grants from parliament very often.

But cost overruns on large public projects are not an unknown phenomenon.

“We need about 52,000 sq m of modern research and teaching facilities. The Niels Bohr Building is to give a much-needed quality improvement in infrastructure to chemistry, physics and natural science didactics. Good infrastructure is a competitive parameter internationally, and this is something we unfortunately now have to wait to gain the benefits from”

John Renner Hansen, Dean of the Faculty of Life Sciences

“Professor Bent Flyvbjerg, whose research interest is major infrastructure projects, has pointed out that public projects are systematically under-budgeted internationally and in Denmark – with the benefits oversold. He calls it ‘strategic misrepresentation.’ Things work better in Norway than in Denmark because they use a different model to control public projects,” says Kim Haugbølle.

“The Copenhagen Opera House, for example, was several billion kroner more expensive than originally planned, but it was a private project and therefore the developer’s own problem,” he says.

UCPH: We do not get full insight into construction projects

Whatever the final price, the University of Copenhagen will have to pay what it costs. The rent for the buildings is assessed by government based on the price of construction. This means that UCPH will have to find the money for the increase in cost from its own budgets.

UCPH has tried to get clarification on the construction finances of the Niels Bohr Building from the Danish Building and Property Agency, says university director Jesper Olesen:

“But we do not know all the consequences since we do not have a full understanding of the construction process, and we have not got an overview of the finances from the agency.”