Professor of rhetoric: Danish election campaign will be ugly 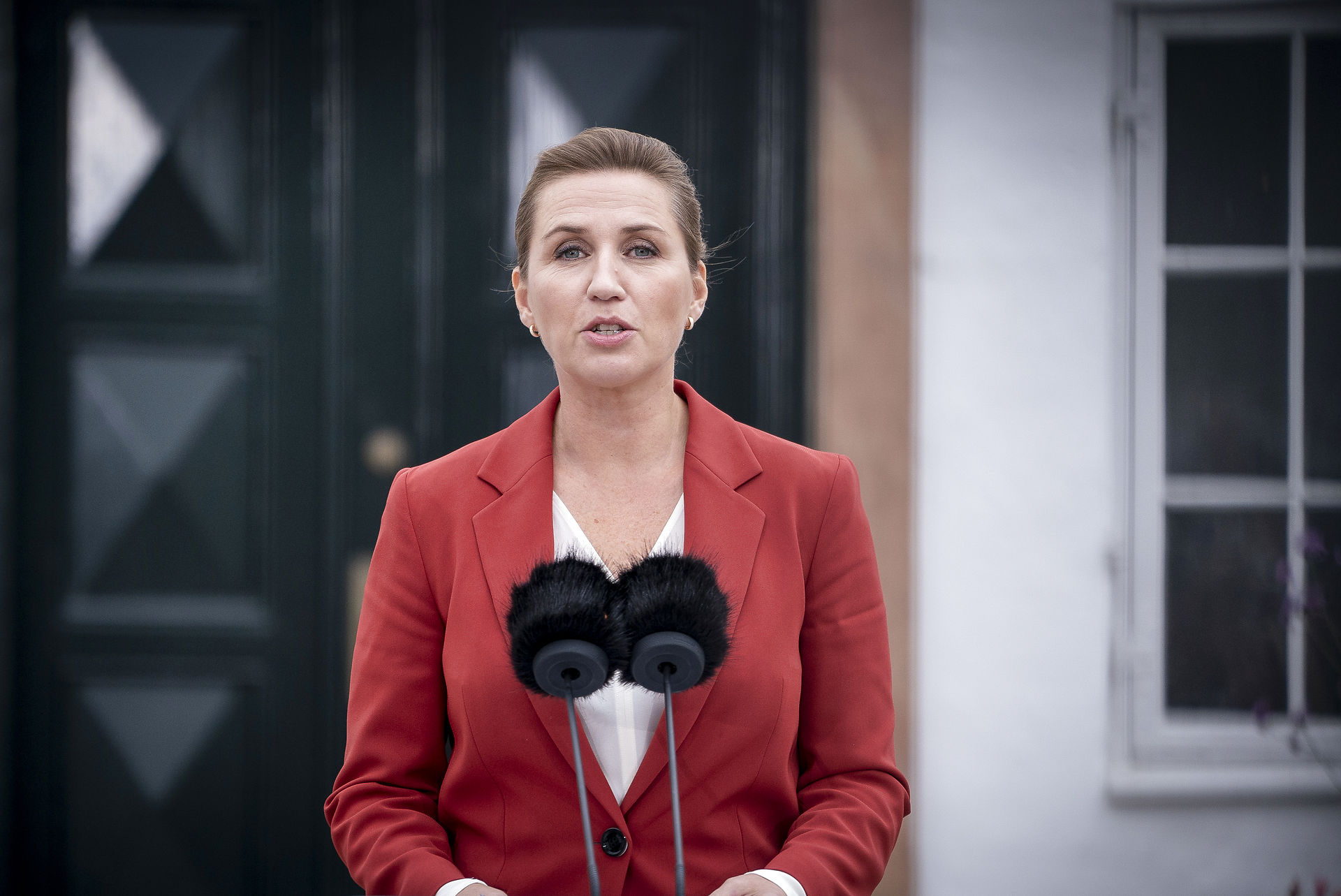 Analysis — Mette Frederiksen appeals directly to the general (white) population. And she is a skilled rhetorician. But she also re-hashes the use of myths. And this mythmaking will increase as the election campaign progresses. This is what professor of rhetoric Lisa Storm Villadsen reads out of the Danish Prime Minister's address at the opening of parliament.

Prime Minister Mette Frederiksen addressed the general public more than her audience when she gave the opening speech in parliament on Tuesday 4 October. Lisa Storm Villadsen noticed this right away:

»Immediately after she had greeted the royal family and the members of the Danish parliament, she addressed everyone who is watching. I do not remember that there has been such a clear awareness of the wider general population in previous opening speeches, and we can thank the live coverage and social media for that,« says Villadsen and points to another example:

»At one place she speaks pedagogically about the ‘EU government’. She thinks, apparently, that she might lose some of the audience if she talks about the ‘European Commission’ which is what politicians do when they talk to each other.«

Self-promotion and that Danish thing

The professor praises Mette Frederiksen’s speech, which Villadsen calls »a really qualified piece of rhetorical work: The structure is clear, we know where we are at all times, we place Denmark in the world, and we have outlined the nation’s specific challenges.«

»That the Prime Minister praises herself and her government contributes to this fundamentally positive atmosphere that she wants to create,« says Villadsen. She points to how Mette Frederiksen’s use of self-mocking humour (she does not like group work) shows insight into herself. That she manages to shoot off a couple of jokes along the way keeps the audience on board.

»All these rhetorical tricks contribute to the purpose: Because Mette Frederiksen’s opening speech is a long, ongoing retraction of the arrogance of power that she has been accused of,« says Lisa Storm Villadsen. The arrogance of power is, of course, the direct reason why the election was [forced by Social Liberal partners to be, ed.] called right now.

When Mette Frederiksen describes a situation of not feeling safe, she clearly speaks from an ethnically white Danish point of view.

»The best way to engage people is to tell stories that are both specific and personal,« says Lisa Storm Villadsen. She notes that Mette Frederiksen begins with the touching story about three children who struggled with hardships. The children grew up and became influential ministers that the Danish audience knows on a first-name basis.

»It is a very human prime minister who speaks with empathy about other people’s feelings, even her political opponents. This would not be the case if she truly was arrogant in her use of power,« says Villadsen.

»Mette Frederiksen uses the stories to put a positive perspective on the fact that we in recent years have gone from crisis to crisis, and that many things look very bleak. In Denmark we can, according to her, meet the challenges and solve the problems, because Danish politics work, and you get results when you opt in to the community.«

Mette Frederiksen says this is something specifically Danish.

»Mette Frederiksen tries to put a positive vibe on the present political situation, but also for the upcoming election campaign. A campaign that will probably be quite dreadful because the blocs are so close [in terms of projected seat tallies, ed.],« says Lisa Storm Villadsen.

What? Climate in third place

The fact that the opinion polls are so close at the point when the election has been called, is also reflected directly in the four key issues that Frederiksen chose to present, in order of priority, as the most important for a future government, according to Lisa Storm Villadsen: The economy is number one, the Danish welfare society is number two, climate number three, and safety number four.

Lisa Storm Villadsen says that she noticed this prioritisation in particular. Climate was not the first item on the agenda, but down on third place. And that safety should be there at all – but we will get back to that.

»Mette Frederiksen could have responded to the many people who ask how the government will handle the climate challenges, but she does not. And she speaks just as much about the environment as about climate in particular when she refers to the butterflies and the larks, for example,« says Villadsen and adds:

»The extinction of species is, of course, a huge problem, but her approach is very pedagogical.«

And just as she talks up the myth about how much crime there is, so she helps spread the idea that education snobbery exists.

Something that Frederiksen does emphasize in her opening speech and in the first party leader debate of the election campaign on 5 October, is that the government should reduce energy taxes, says Villadsen:

»When you reduce taxes on electricity, the government is giving with one hand and taking with the other. The whole point of the taxes was to promote the green transition. When it comes to the whole climate question, I would say that Mette Frederiksen is covering up the internal tensions.«

The Prime Minister is generous with her praise for her own government’s climate efforts, which are otherwise the subject of heated debate:

»But we hear nothing about the violent resistance to biogas plants and wind turbines throughout the country. Here, however, she actually demonstrates political leadership by saying: We need to do this, and we need more of it.«

»There is, nevertheless, a gap between the perception of many Danes of what the climate measures mean specifically, and the Prime Minister’s own praise of her own government. Mette Frederiksen really tries to project confidence: We can do it, she says.«

The segment about the North Atlantic, on the other hand, contains self-reflection, says Lisa Storm Villadsen:

»Mette Frederiksen has apologized to the children from Greenland who were the subjects of experiments, and it is nice to have an element of self-examination when the self-praise is otherwise so overwhelming.«

The ‘us’ of ethnic Danes

»I really wondered about this. As a dark-skinned Dane you might think in this part of the speech: Yes, let’s address the harassment [of ethnic minorities, ed.]: Why can I, as a brown-skinned Dane, not get into night clubs, can’t we do anything about that? But when Mette Frederiksen describes a situation of feeling insecure, she clearly speaks from a white, ethnic Danish viewpoint. And ironically she has absolutely no sense that it actually works both ways.«

»At the same time as she speaks openly about society and community, it is apparently in these cases, only a question of poor upbringing. There are some who are apparently not quite Danish enough, but the speech is not addressed to them. They are referred to in the third person. The ‘we’ is us ethnic Danes,« says Lisa Storm Villadsen, adding that:

»Frederiksen speaks about getting a grip on the influx [of migrants, ed.] – something that harks back to 2015. There is no influx of refugees to Denmark at this point in History.«

And now we are at the fact-checking part of it: According to the statistics there has been no increase in personal crime, but actually a decrease.

»Yes, that the feeling of being unsafe should be so much the focus of the speech. We are many of us who would say this is off-the-mark,« says Lisa Storm Villadsen.

When the Prime Minister in terms of migration policy speaks of a closer co-operation with Africa, then this is the most whitewashed, chlorinated description of asylum centres in Rwanda, you can even imagine.

There are also other myths being brought into play, like about the universities, says Lisa Storm Villadsen:

»She takes up her proposal about shorter master’s programmes, and in the same way as she talks up the crime myth, in the same way she helps disseminate the idea of education snobbery. As a university person, you can find this quite weird, when you know that knowledge is our most important resource,« she says:

»But then again this is a clear sign of a very broad popular appeal – and I am trying not to use the phrase ‘populism’ – which is in this speech.«

Can you recognise the claim that the universities are primarily designed to educate researchers and specialists?

»No, first of all, it’s never been true that we’re educating people for an ivory tower, as she claims. The universities educate lawyers, doctors, upper-secondary school teachers and so on. And secondly, we educate graduates with wide general skills who are able to work independently and in a qualified manner with complex issues, also in practical life.«

Lisa Storm Villadsen says that some of Mette Frederiksen’s examples are cringe-worthy: Everyone should be allowed to eat a good meat patty, she says. And she identifies herself – and by extension all Danes – with Tour de France winner Jonas Vingegaard’s gesture to his crashed opponent on the mountain:

»These are typical examples of how she tries to get the general public to go along with her. They are the things we like to hear, because this is how Danes are. To be fair, I will emphasize that she also says that we have not been the world’s best colonial power, so there are nuances to this.«

Now we are talking about being Danish with the Danes, Lisa Storm Villadsen has another observation about the opening speech:

»Mette Frederiksen quotes fellow politician Henrik Dam Kristensen in a sentence about eroticism. You kind of want to say: You will only experience this in Denmark. The prime minister hopes with this to demonstrate tolerance and and open-mindedness, certainly among the Danes that Mette Frederiksen includes in her ‘us’.«

Remember this when it gets ugly

Lisa Storm Villadsen reminds us that there is a segment analysis underlying Mette Frederiksen’s speech:

»She is fighting, for example, the Conservative Party on the safety issue and with the new Denmark Democrat Party on refugee policy. So here she is marking a position that is not based on reality, but on political points of view,« she says, and adds:

»When the Prime Minister in terms of migration policy speaks of a closer co-operation with Africa, then this is the most whitewashed, chlorinated description of asylum centres in Rwanda, you can even imagine.«

But this is actually one of the prime Minister’s most important rhetorical strengths, according to Lisa Storm Villadsen:

»One of the things that makes this speech a piece of excellent rhetorical craftsmanship is that it is politically and societally uplifting, even though she presents the situation in Denmark in ways that not everyone agrees with. I thought that if this is the new opening speech tradition, where it is actually about the general political issues, and how we do politics in Denmark with compromise and co-operation rather than polarization: Then this is an excellent template for future prime ministers.«

»Now there will, of course, be an election campaign in which some of these things will lose prominence, because the parties have to raise their profile by focussing on their differences. But I am still left with the a feeling of a well-functioning political environment in Denmark with political opponents respecting each other. We have a prime minister who talks about the importance of listening and collaborating, and we need to remember this when it starts to get really ugly as we approach election day on 1 November.«