Professors: The University of Copenhagen has a job security problem 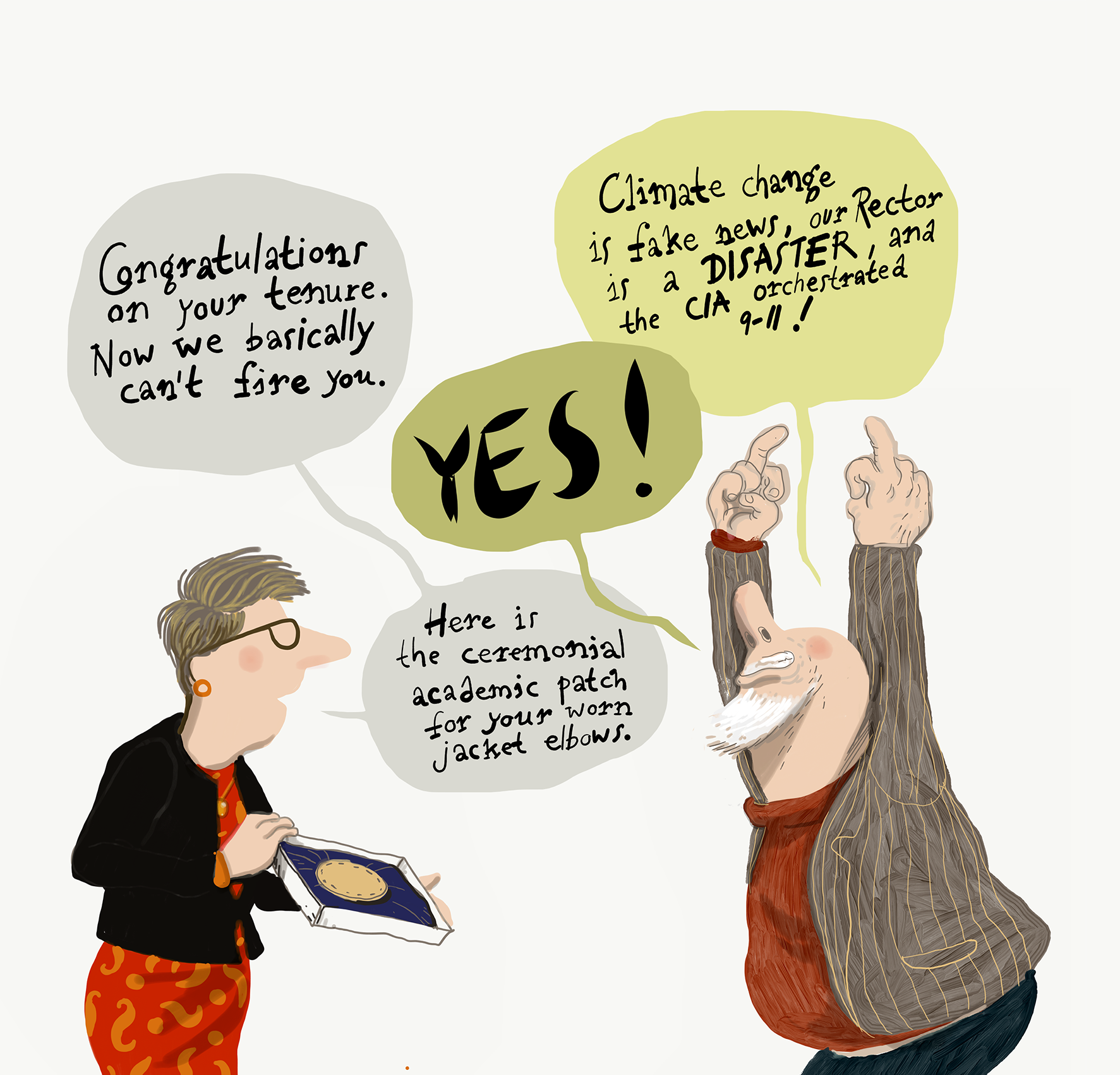 TENURE - At American universities, tenure ensures security of employment. UCPH offers a kind of tenure, but it is not the real thing, according to the critics
image: Christoffer Zieler

Job insecurity — While it may make sense for Thybo’s boss to fire him, UCPH as a whole has been damaged by the case. Professors calls for job security, even for the scientists who are difficult

The case of the fired geology professor Hans Thybo has set off a debate over job security for researchers at the University of Copenhagen.

“If you do not have secure employment conditions, you do not actually have real freedom of speech or academic freedom”. This is according to a former Danish economics policy adviser and member of the University of Copenhagen board Niels Kærgård in an opinion piece on the news site Berlingske that he co-authored recently with the former vice president of the Danish Council for Independent Research DFF Peder Andersen.

The layoffs at the University of Copenhagen, that are not a part of the larger round of cuts, are nothing new, according to the piece, and last year’s dismissals of can harm UCPH on the inside, and beyond the country’s borders.

It is considered one of the University’s main strategic objectives to recruit more talented researchers internationally.

Prorector for Research Thomas Bjørnholm has made it a personal priority to introduce special start-up funding and a tenure track program at UCPH to guarantee a career from assistant professor to associate professor for .

Tenure, as we know it from the United States, would not let someone get fired in these cases.

Tenure is a concept that UCPH picked up from British-American academia. Researchers with tenure are difficult and expensive to fire. But when universities still offer this kind of employment, it is in recognition that it is difficult for scientists, who by nature are specialized in their work, to find a new job if they are terminated. Without tenure, some would refrain from applying at all.

But if you ask Kærgård and Andersen, there is a mismatch between the University of Copenhagen’s stated intention of ensuring job security and the real terms on offer:

“When Danish universities advertise positions as ‘tenure’ and ‘tenure-track’ internationally, while at the same time unceremoniously sacking qualified associate professors and professors, you easily get a shady reputation. It is a bit like what happens if you become known for selling horse meat under the label of ‘beef’,” Kærgård and Andersen write in Berlingske.

According to Niels Kærgård – who is one of those behind a petition protesting the recent firing of Hans Thybo – UCPH’s reputation has already suffered due to the present conditions.

“Some of the stuff that is happening – not only in the Thybo case but also in the rounds of layoffs –  comes as a surprise to people in major research countries like the US, where they have tenure and therefore job security for researchers. Tenure, as we know it from the United States, would not let someone get fired in these cases,” he says.

Hans Thybo has been fired on the grounds that he used a private email account for work purposes, and because UCPH claims that he put unfair pressure on a young researcher, partly by encouraging him to criticize management in a work assessment survey.

In the unravelling of the Thybo sacking it also emerged, also in the University Post, that Thybo was at odds with his bosses, and that he by some colleagues was considered difficult or even unpopular.

Niels Kærgård, how did they take care of what you in the piece in Berlingske call ‘difficult’ employees in the past?

“People were previously hired under the civil servant category. If you fired them, they would get three years’ salary and pension for life, unless there were exceptional circumstances and the person had, say, abused public funds,” says Niels Kærgård.

The fact that university managers were elected by their colleagues, also held back the urge to fire people, says Niels Kærgård.

But today, managers in academia are under a term contract, which according to Niels Kærgård can even give some of them an incentive to fire troublesome employees to demonstrate their ability to act within their period of employment.

“Before the introduction of recruiting under collective agreements and hired managers around the turn of the millennium, they would often attempt to just let things run smoothly, like by transferring staff from one department to another.”

Maybe nice for the local boss to sack someone, but bad for uni as a whole

The university’s management structure can also lead to decisions that do not benefit the institution as a whole, says Kærgård.

“When it is a manager of a local research environment that has the problems if an employee is difficult, it can, from the standpoint of a cost-benefit analysis, be rational for them to fire,” he says.

But the dismissals are just the tip of the iceberg. The problem is also, how people are treated during their normal daily working life.

But it is the institution as a whole that has to bear the possible costs of a controversial dismissal in the form of a deteriorated working environment where employees don’t dare speak up to their bosses, the loss of reputation, and the diminished opportunities for attracting qualified applicants from outside.

“Local decisions can result in an imbalance in relation to the overall institution’s interests,” says Niels Kærgård.

Law professor: Problem is deeper than the dismissal cases indicate

He confirms that Danish researchers are easy to fire.

“Yes, universities are subject to cuts, and they will be for many years to come, so there is always an occasion to sack people who do not fit the profile, or whatever else they come up with. But the dismissals are just the tip of the iceberg. The problem is also how people are treated during their normal daily working life,” said Hasselbalch.

According to Hasselbalch, local university managements have in recent years had far more opportunities than before to encourage employees they like and vice versa.  Especially after the introduction of so-called local salary schemes that let managers encourage and penalise their employees.

“If you are inconvenient to management, you won’t get, for example, any part of the special salary increases or promotions. There is the real problem. It is this that determines whether you stay an associate professor forever, or whether you become full professor in salary grade 38 with various allowances on top,” says Ole Hasselbalch.

UCPH took rankings dive after round of layoffs

Thybo is not the only high profile researcher who has been fired from UCPH recently.

Another example is the ethnology professor Thomas Højrup whose sacking, like the Thybo case, resulted in hundreds of futile objections from students and colleagues.

Højrup did not lose his job because UCPH claimed he had done something wrong, but because he was judged to fit into the category of best qualified “for prospective job assignments among the qualified group of employees” in a cost-cutting measure – something that the former academic staff representative Leif Søndergaard criticized in the newspaper Information.

The annual world rankings of universities are one measure of the University’s reputation and they typically put UCPH in the front in Denmark and have the university measuring up to many excellent institutions around the world.

UCPH management analyzes Copenhagen’s position in the rankings in the knowledge that it has an impact on the caliber of researchers and students the university will receive or have the opportunity to work with.

In 2016 – a layoff and dismissal year for Danish universities – the University of Copenhagen dropped 38 spots on the , which is one of a handful of leading rankings.

Ellie Bothwell, a journalist at Times Higher Education specializing in Scandinavia, explained the University of Copenhagen’s drop with the loss in international prestige among the (according to the Times Higher Education’s website) 10,500 ‘leading scientists’ who provided input to the latest rankings.

“We can see that the dismissals and cuts are beginning to have an effect,” said Ellie Bothwell in the autumn of 2016.

That was before the sacking of Professor Hans Thybo.