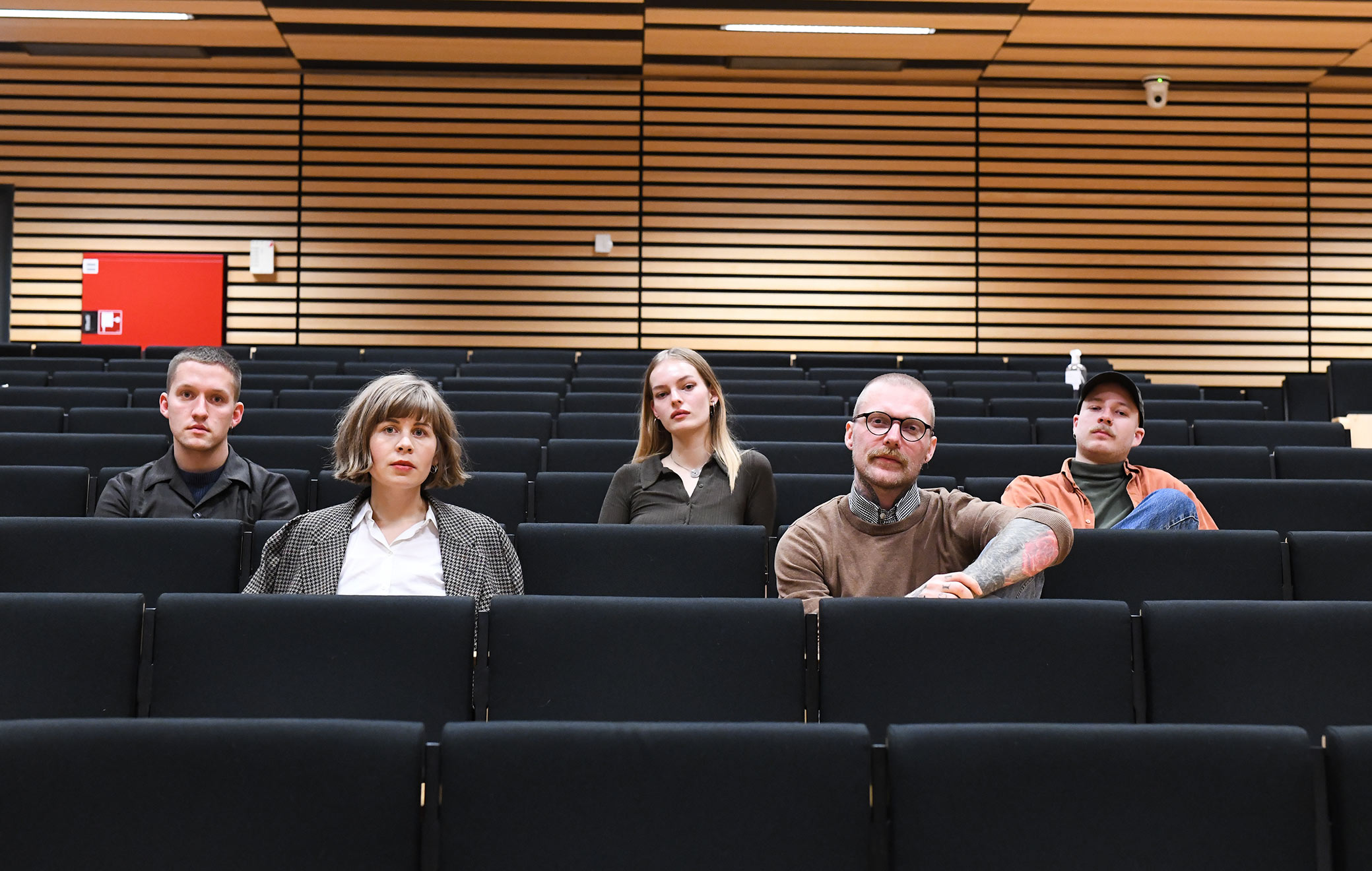 More than 200 psychology students huddled together for a general meeting and called for a wider academic focus in their study programmes. They voted, and passed a resolution setting out 11 demands. If the students are not heard, they will blockade the department.

»Damn, there are a lot of people here. This is ridiculous,« exclaims Lasse Pedersen enthusiastically, a tall psychology student with a moustache and tattoos up his arms and neck.

More than 200 students have crowded together in an auditorium at the old municipal hospital CSS Campus. Latecomers scout the room for their friends on the packed rows, spot them, and hurry through the hall.

The beers are lined up in rows, but the horde of psychology students has not come here to socialize on this Thursday evening 11 November. They have come to discuss the future of their degree programme, and – possibly – rebel against the academic direction that their department is taking. A blockade even, if need be.

Lasse Pedersen, who is vice-chair of the Study Board at the Department of Psychology, sets the tone in his presentation:

»The discussion must be started by us, the students. Because we are not bound by pragmatic, opportunistic, or financial considerations. We have the privilege of being able to be idealists,« he says.

200 sets of hands clap, and the noise signals that almost everyone is in agreement. Some break out into shrill ‘wooh’ exclamations, others whistle, and finally, feet drum on the floor so that it rumbles out into the lecture room.

The meeting is on.

This is not the first time that psychology students criticise the course that their degree programme is taking academically. Earlier this year, a group of students that were critical of the syllabus revealed that qualitative methods and theoretical texts had been given lower priority in the subjects Social Psychology and Educational Psychology.

This is not an attack on science and on quantitative methods, the students repeat. This is an attack on what they see as the neglect of entire avenues of research and methods that used to characterise the psychology programme at the University of Copenhagen.

Sandra la Cour, who is on the second semester of her Master’s degree programme, elaborates:

We have the privilege of being idealists

»Academic breadth of view is important because our subject area is the psyche. It is a phenomenon that is embedded in this world, and if you only study it from a purely natural science, or purely humanities or social science perspective, you cannot grasp all aspects of the phenomenon.«

Several of her fellow students chime in after the general meeting:

»Right now there is this uniformity in the theory and methods. We want to get the breadth of view back so we can become skilled critical psychologists who actually relate to the people who we face,« says Filippa Rye Rønhof from the seventh semester.

»Some of the academic fields that enable us to analyse, criticise and assess the systems that people are embedded in, with and against each other, are disappearing. This makes us worse psychologists,« Hans-Jørgen Hersoug (ninth semester) adds. Then Christian Styrbæk Kensmark, a member of the Study Board for Psychology, plays the trump card:

»Our academic toolbox is getting smaller, and we also become a more homogenous group of psychologists. This means that society will have a narrower range of therapeutic services available. This will have an impact on the general public.«

It is, according to the students, a trend that is reflected in both the syllabus, and in the department’s appointments recently.

And it is a trend that has taken place over many years and for many reasons, he says. According to the students, the most recent example is the resignation of Associate Professor Pernille Hviid, a recognised development psychologist with expertise in qualitative research.

The University Post has attempted to secure an interview with Pernille Hviid, but she does not wish to comment.

The criticism is not new, in other words. However, it is new that 200 students get together to discuss the future of psychology.

And it’s new that they show the kind of conviction as on this Thursday evening in the old hospital.

Christian Styrbæk Kensmark gets another deafening round of applause, mixed up with feet stomping the floor and cat calls, when he criticises his department:

»The dialogue with the department has not borne fruit. We can’t see that they have listened to our concerns. The department does not seem to be interested in employing qualitative researchers,« he says calmly.

Our academic toolbox is getting smaller, and we are also becoming a more homogenous group of psychologists.

Time to get tougher, in other words, and this is why the Psykrådet, the academic council at the Department of Psychology, has called in the students so it can get a mandate.

First, the six demands are presented by the initiators behind the general meeting. »Qualitative research needs, to a greater extent, to be represented in research and teaching,« is the first one. »More student involvement and transparency in managerial decisions at the department,« is another one.

More hands shoot up, changes are discussed, new proposals come into place, and finally the students have to vote on the 13 demands.

This is done alternately by show of hands and via a link that they access through a huge QR code in the slide show.

All thirteen demands are adopted. After the meeting, a couple of them are merged together, so 11 demands are left.

There are scattered objections along the way. One student, for example, warns against ‘bashing’ neuroscience, a natural science branch of psychology, and the presenters assure him that this is not their purpose.

The atmosphere, however, gets more intense, more hesitant, before the next item on the agenda. The question is: What should the students do if the department’s management does not meet their requirements?

The proposal from the presenters is clear: They will blockade the department. This is the last thing they want, they say, but the threat is to prevent management from simply sweeping their demands under the carpet.

This gets a third semester student to stand up:

»I think it’s super cool that you do all the work on this, but I also have to ask for a little more transparency. You say that we should trust you as negotiators, but I don’t know who you are. I would like to vote, but I do not want to vote in favour of you as negotiators with a mandate for a state of emergency that I do not know what will be.«

Maybe you should hold back a bit on the rounds of applause?

A slight rumble spreads through the audience. Another student gets up and proposes that they hold more meetings before deciding on a possible blockade. It is voted on, and passed.

A new student puts up their hand, and is given the floor:

»When I speak to people who do not find these academic developments problematic, they have not wanted to turn up today. So the question is whether this assembly is representative of the whole study programme. It’s a pretty big decision to make, a blockade,« he says.

He receives a curt response from the fourth row at the other end of the room:

»This is democracy, and after election night, you can’t say that it was a shame that so and so did not vote. We can’t take those who didn’t show up into account.«

The blockade is adopted

The critical voices are outnumbered in the room, but a number of different points of view are voiced, some to the sound of quiet reflection, others to cat calls and roars. At one point, Sandra la Cour asks the room to stay calm:

»It’s great to feel your commitment, but it’s also really important that there is space for all initiatives to be put forward. Maybe you should hold back a bit on the rounds of applause? So there’s not this consensus that you can only say something that gets applauded.«

She receives a loud round of applause, though this then dissipates and is replaced by laughter.

It’s important that the people at the department take this as something damned positive.

The general meeting ends, one hour over time, in the most dramatic vote of the day: Should the students blockade the department if management does not listen?

The students look at their phones and vote. A few minutes pass, and it is reported that the results are clearcut:

There are more than 170 votes for the blockade threat.

The next question comes quickly: What should the department do specifically for the students to withdraw the threat?

»We need to, at least, meet people who take this seriously. And it can be difficult to say how this should be demonstrated. In any case in a different way than they have done so, so far,« says Sandra la Cour.

»That sure was commitment«

On Monday evening 15 November, a group of psychology students authored an email to the department management team, presenting their eleven requirements.

According to Lasse Pedersen, the department should receive these positively – despite the demands and the threat of blockade:

»It’s important that the people at the department take this as something damned positive. It should not be ‘us’ and ‘them’. There have been more than 200 students there, deeply committed to their subject, considering how they would like their education. And if you fight this, I think you have misunderstood what commitment really is.«

»Because that, in there…, that sure was commitment«

I covered the blockade at the Faculty of Humanities, and if there was one thing that it did create, it was a split between students and management. Do you not fear that this will set off an ‘us’ and ‘them’ feeling?

»We have presented the arguments for the blockade, but we have chosen to do things in a different way first. We want the dialogue,« says Lasse Pedersen.

»And it’s not too much to ask for. This is not some wild announcement. It’s actually kind of wild if it is perceived as such.«

The University Post has been in contact with the department management team at Psychology. They do not wish to comment until they have taken a closer look at the requirements and have held meetings with the students. The students will set up a group to negotiate with management on 29 November.