Rector gets a loud and clear message from South Campus 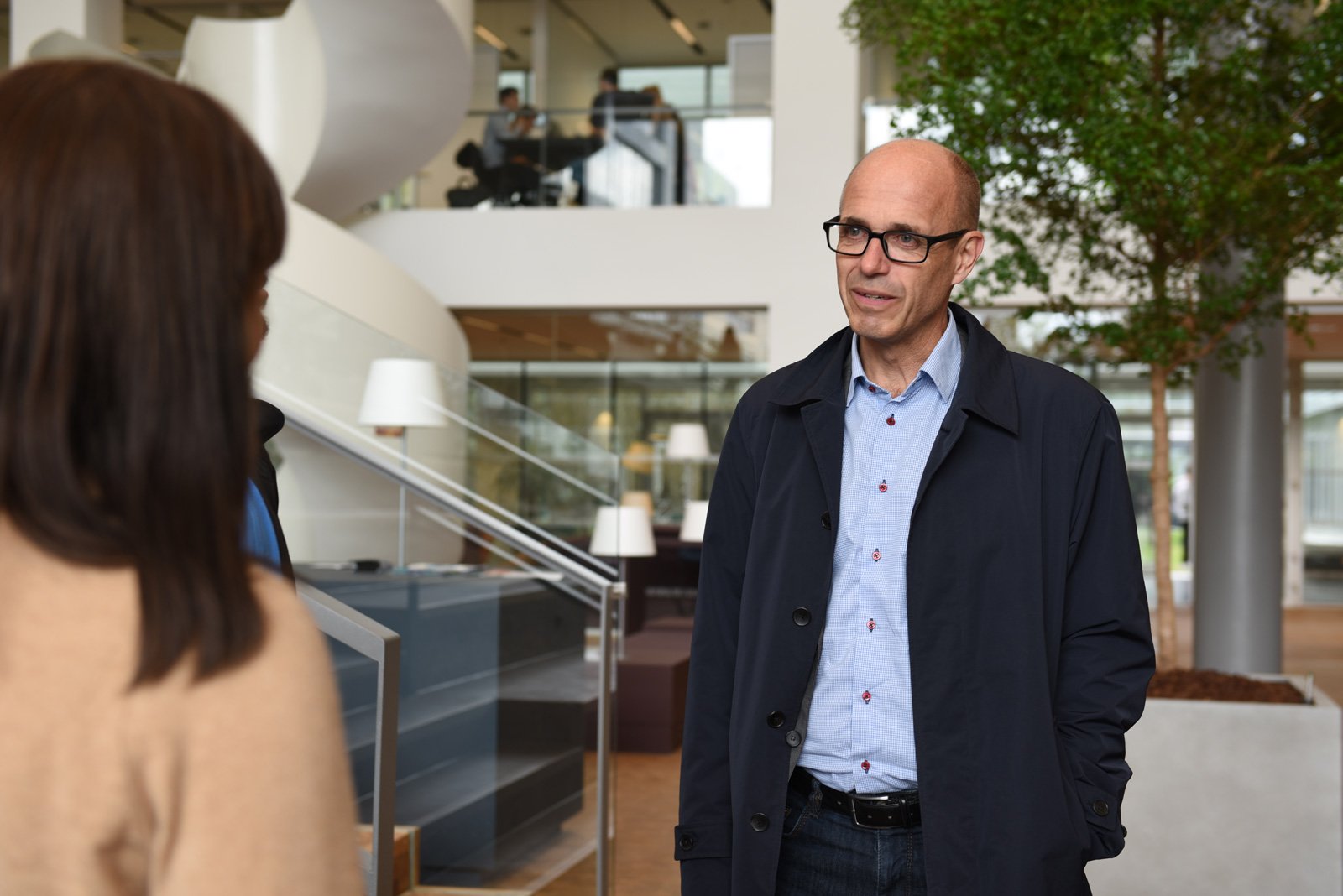 Rector visit — Rector Henrik Wegener visited South Campus to hear about the state of things. While some had good news, others sounded the alarm.

The Rector is a few minutes too early.

as he walks from Islands Brygge metro station down towards South Campus – one head higher than the two student council representatives flanking him.

It’s been six months since Henrik C. Wegener took over the rector job from Ralf Hemmingsen – and over the next few weeks he will visit the campuses of the University of Copenhagen and speak with students and employees about their experiences at UCPH.

South Campus is his first stop. Once, it was a humanities hub. Then law, theology and the Royal Academy of Library and Information Science moved into the recently-built KUA3 complex at the turn of the year. Since then, the buildings along Njalsgade have been home to approximately 15,000 students and 1,500 employees.

Henrik Wegener will chat with 16 of them. While some have good news to share, others will sound the alarm. Because not everything is going well at Søndre Campus.

“Has it been tough to settle in?” asks Wegener.

The rector is standing in the law faculty’s Knowledge Centre – a large, beautiful atrium which functions as a gathering point for the faculty, with

“No.” answers Bolette. “At the beginning, some complained that we lacked study spaces – then we found out, that there actually were some. They were just a little further off.”

Lucas is a little more critical.

“The study environment at Theology suffered in the move. Our students complained over a lack of study spaces. But now we have set up a classroom as a study room instead. We also had a problem with the fact that our new “walking hall” is a bit like a train station. But we have a really good collaboration with the faculty, and have solved it by installing new shelves, for example.”

“Can you get something else from the inner city,?” asks Wegener, referring to Theology’s old location in Købmagergade – rooms, which many theology students were sad to farewell.

“No. It’s different here. Not better or worse, but different.”

Small, dark stains spread across the parquet floor. It’s raining outside – and also a little bit within the Knowledge Centre. Uniavisen has previously reported on the problem, which according the the head of the project, was caused by the fact that the automatic skylights were incorrectly programmed so that they opened when it rained and closed when the sun was shining. And it seems that the problem has not been completely fixed. 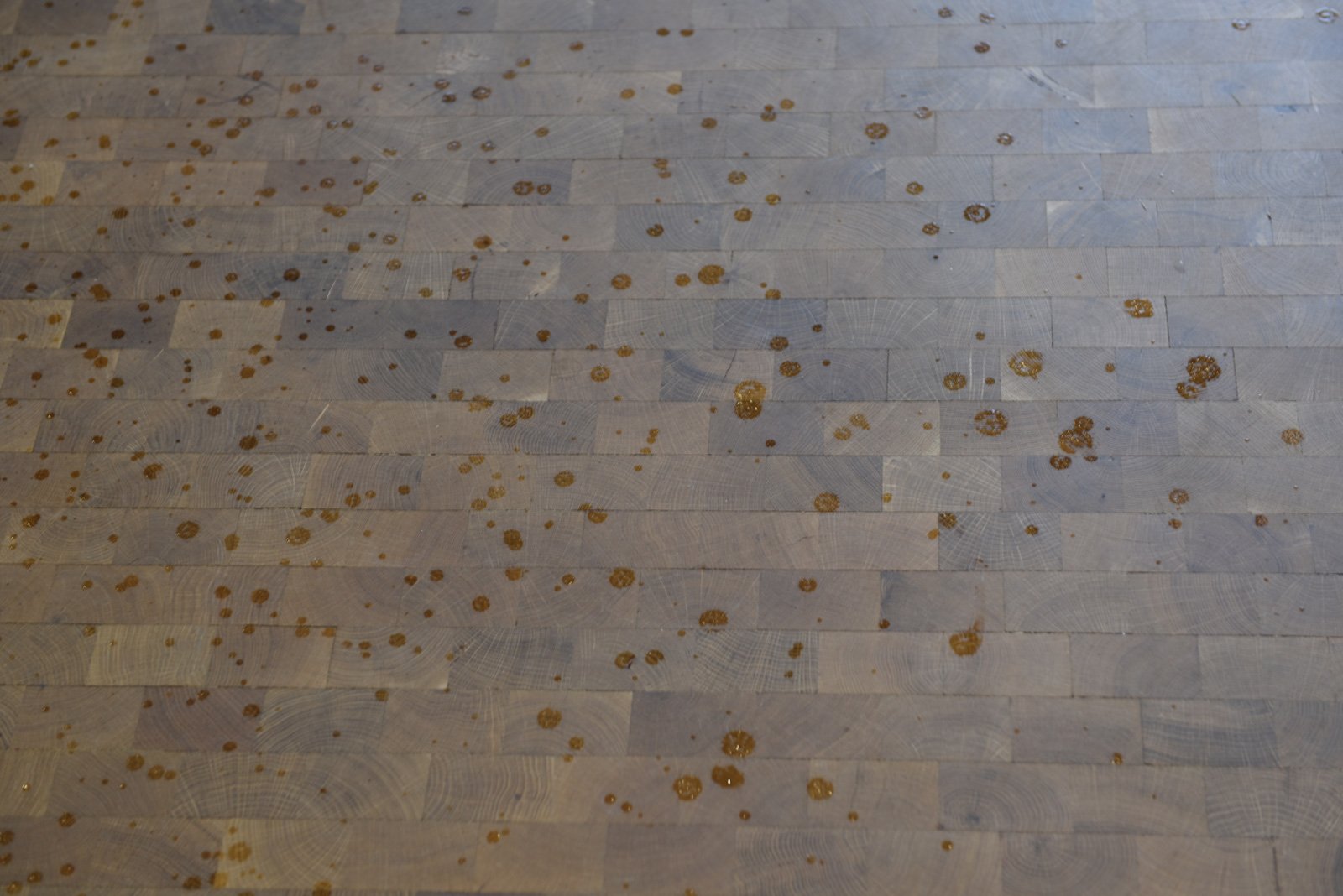 During the chat, it begins to rain outside - and also a little inside the new buildings.
image: Dennis Christiansen

“Has the move brought you closer to the professors?” asks Wegener

“It’s certainly easier for us to come into contact with the professors here,” says Bolette. “Before, we almost had to book a meeting to get in contact with them – and wander across the city. I have just finished my bachelor thesis, and it was great to be able to meet a researcher in the hallway.”

“We were already quite close to them in Købmagergade,” says Lucas. “But it has since become better here.”

“The physical structure is there,” says Wegener, looking around the large room. “Now we will get the most possible out of it.”

“The studentes have fallen apart”

“There’s not a lot here, that is positive.”

Lecturer Benedicte Fonnesbech-Wulff has just shut the door after us and offered a seat to the rector and student council representatives at a little wooden table, where her colleague Sheila Aakeson is already sitting.

We have stopped at the Institute of Cross Cultural and Regional Studies to hear about the challenges facing the small study program, and are now sitting closely in room 12.3.18, which houses Student Counseling .

“But you have a nice environment?” says Wegener. 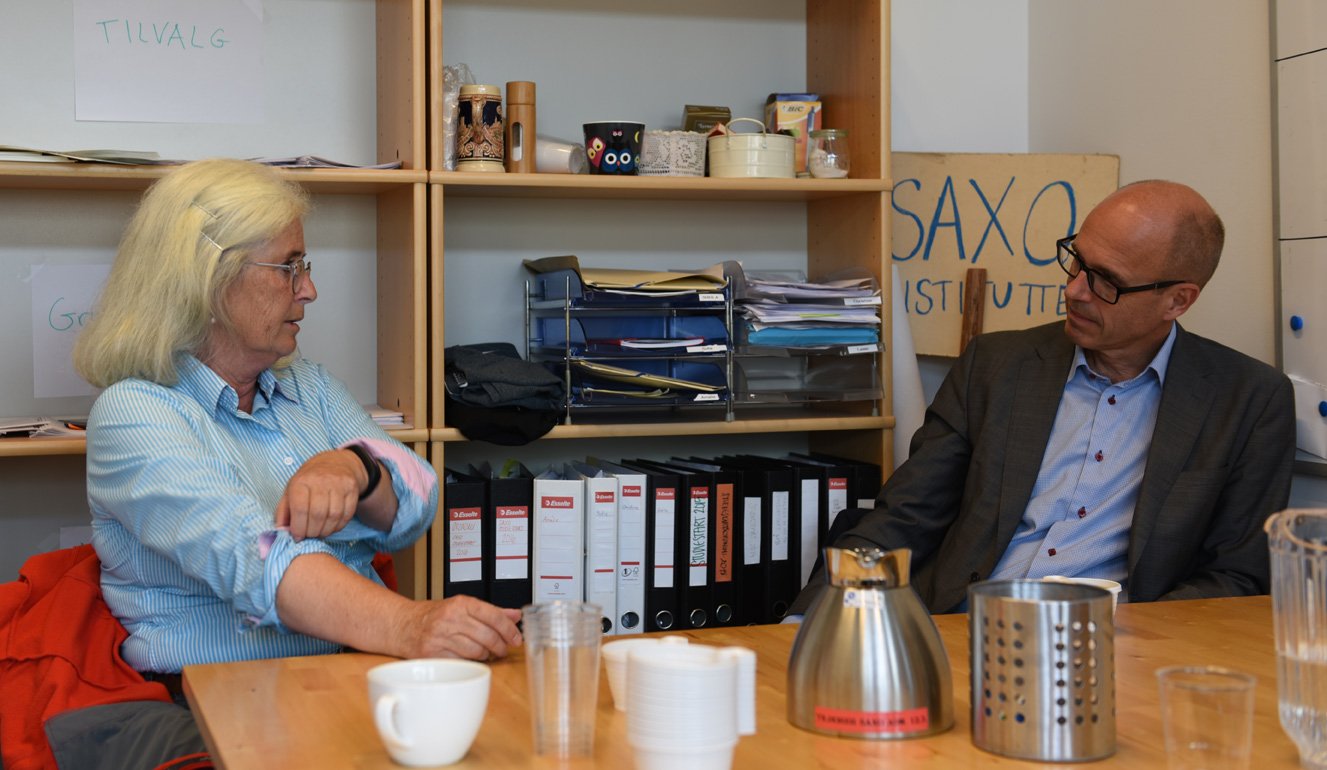 Fonnesbech-Wulff rolls up her sleeves while she speaks.

“Before, there were seven student guidance counsellors, plus me, who worked as a counsellor half the time, and now we are four due to savings. Our work in here is about people. And many of the students who come through the door here, they are falling apart. That’s what the progress reforms have done. We have had a significant increase in giving very serious guidance.”

“That is unfortunately not that surprising,” says Wegener. “At my former workplace, DTU, we called them ‘drop out reforms.”

“It has created SO much anxiety, so much insecurity.”

“UCPH has a lot of freedom in how we implement the reform. Is it noticeable?” asks Wegener.

“No,” says Fonnesbech-Wulff. “We are on guard. We need to say to the students ‘today we can advise you this way. But we can’t guarantee that it will be valid tomorrow.’”

Wegener wants to know whether students are struggling to manage it all.

“Our students are bright. But they are finding it tough,” says Fonnesbech-Wulff.

She explains that for this reason, they have had to adjusted to more severe cases:

“We have cut back as much as we can. We know, that we are devaluing. But there are limits to how much we can cut back. The majority of the students that we see for guidance are under pressure. Only a few can manage five years of study without an unforeseen event that holds them back. We see that people who come here have been under pressure for many years. It was shocking to discover how many young people are using antidepressants.”

Before, there were seven student guidance counsellors, plus me, who worked as a counsellor half the time, and now we are four due to savings. [...] And many of the students who come through the door here, they are falling apart.

“We call it a handbook library. Do you know why?”

Five minutes later, one floor below, history student Ida Nørskov is chatting to the rector at the entrance to the Saxo Institute’s library.

“Because you already have books in your hand?”

“Yeah. We have a principle that you always will need to look something up. We read highly-specialised material which is only available in few editions, so it has to be available for all.”

“Hypothetically,” says the rector, “If we consider e-books, how would the library’s future look?”

“Many studies would be handicapped when it comes to online availability. Take, for example, the course I’m currently taking. Both books on the curriculum are sold out. They can only be found in the library.”

“No, they can’t. The Royal Library buys access to digital editions, but specialised things don’t come out from the major publishers. There are many sources, which cannot be found digitally. It’s dangerous to bury the idea of books.” 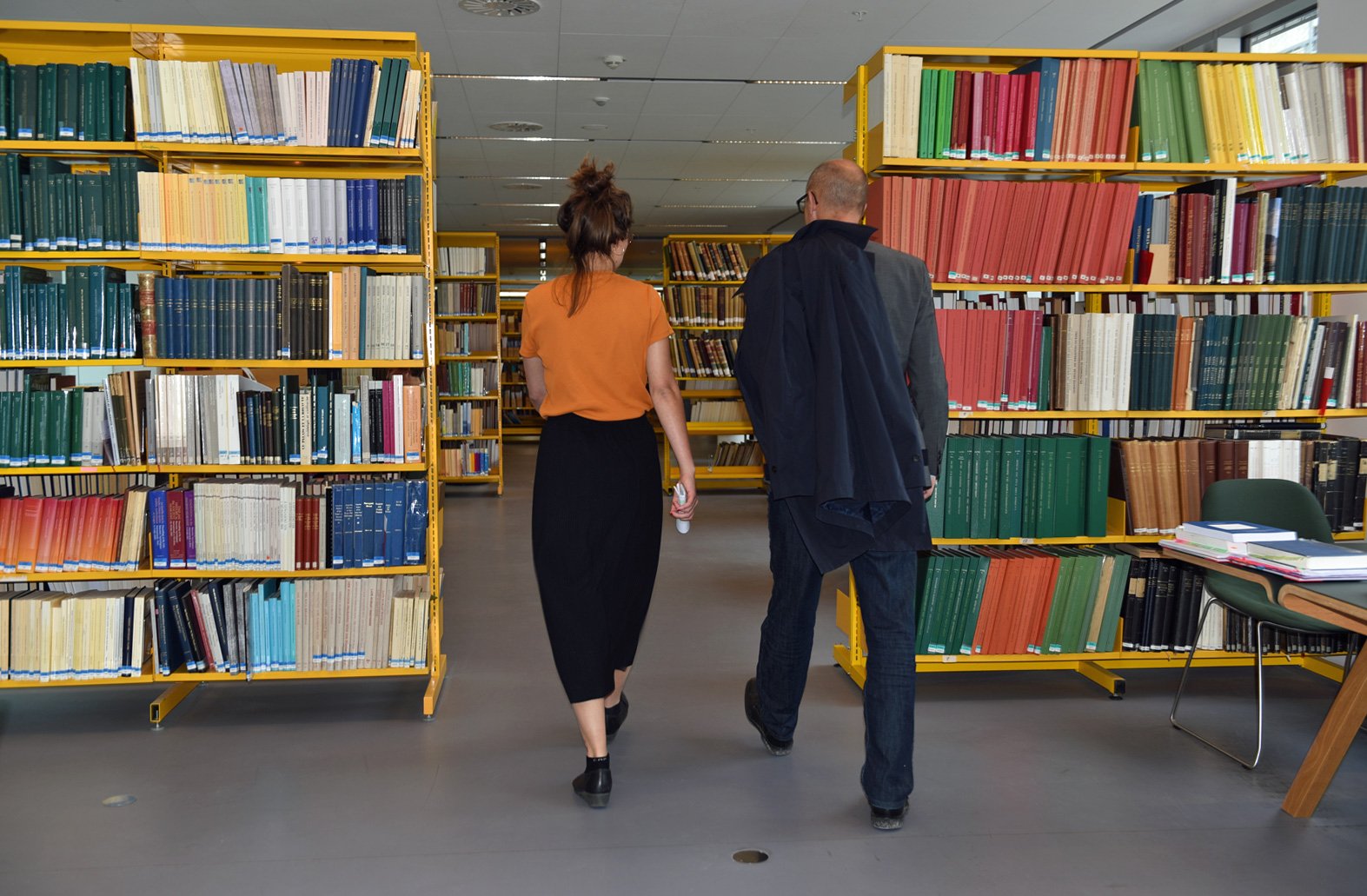 Behind the chat, there’s the debate about library closures. The Humanities Faculty must save 60 million kroner, and the institute libraries must find three milion of them: as a solution, libraries can be teamed up and book collections can be moved down to the cellar. In 2016, the latter happened to the library from the Institute for English, German and Romantic languages (ENGEROM). The library had to give up its space, and the book collections are now spread over the Institute’s halls and offices, and down in its cellars.

“We have full-time librarians here at SAXO, but unfortunately there are cut backs ahead. We must transfer to the Royal Library on July 1, but there is no clear plan as to how this will happen. The employees will either be moved or fired. It’s a horror show. And we will have part-time librarians without specialist knowledge.”

That things close, that is the horror show. We are very nervous about the changes on the way.

“No, the real horror show is what happened with the institute library at ENGEROM. When the library was closed overnight, the books ended up in the cellar and common areas and study spaces. That things close, that is the horror show. We are very nervous about the changes on the way. We are very distinctive at all the different libraries. You can’t just have everything collected in one library like they do at CBS. I am afraid that we will be held back, and that the university will be shooting itself in the foot to save three million kroner. And The Royal Library is also under financial pressure.”

She says that what happened at ENGEROM is awful. That it was a desperate decision.

“I have respect and sympathy for the people who have to make the decision. It is never easy to make that decision,” says Wegener. 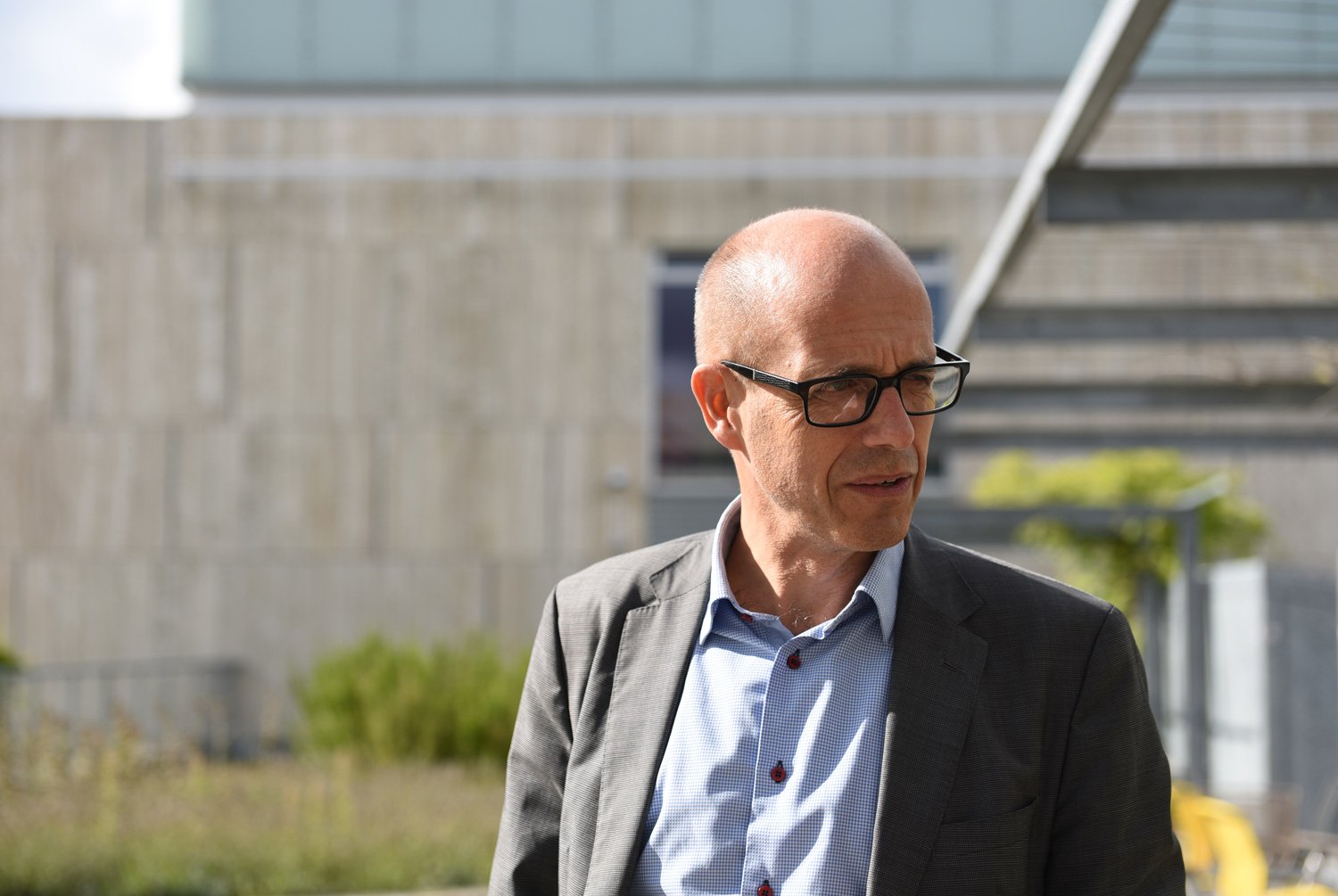 At the Institute for Art and Cultural Studies, the mood eases. It seems music studies student Johan Boje Mortensen is upset by all the writing about the Institute’s Beyonce course. Not about what is being written during the course, which he likes and finds perfectly justified (“we are studying to be educated in music, after all!”), but the fact that it’s been taken up by the media as an example of the “nonsense” taught and researched at the humanities.

“I think that the story has had a more positive take than feared,” says Wegener. “Erik Steinskog [professor, – ed.] explained his message well and explained why it is important that the university teaches it.”

He asks Johan what they are doing at IKK to make their contribution to society public – and whether there is something he as rector can do as well.

“We’re taking on that responsibility.” He says he often has to tell people that his studies are far from the enemy of the job market, as the public debate would have it.

“The University always has to explain itself to the gawking public,” says Wegener. “We are so special, or unique, that we must always explain why we are necessary.” 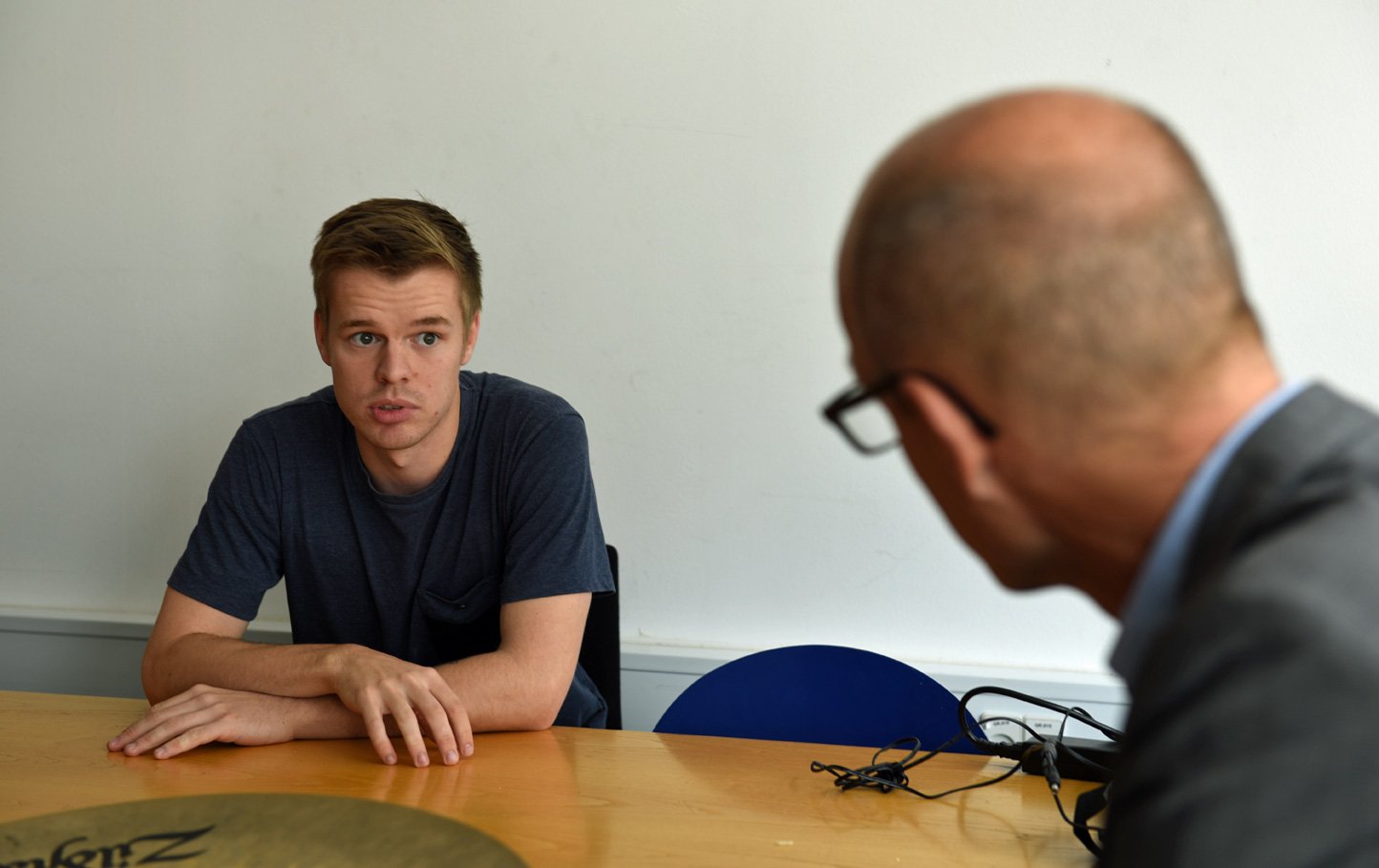 We follow Johan into the IKK students’ bar / café Roland Bar, (did you get the reference? – ed.) where we meet a (the bar’s mascot) and students Pernille Bille Kjær and Rina Nidam Møller. The last two help run the place as volunteers.

“There are many of us, who would not have made it far at university, if we hadn’t had Roland Bar as a gathering spot,” says Bille Kjær.

At this point, Uniavisen needs to leave their company. The rector still has three stops on his tour of Søndre Campus. The day after, we ask him what he has taken away from the meeting with the students and employees. He responds by email.

“I am pleased to see that the physical space pushes the faculties closer together and has created better opportunities to meet researchers. We must, of course, always make an effort the improve the study environment, but Søndre Campus has the best conditions. I myself felt the urge to be a student again and have a drink at Roland Bar or Café Helga.

Hearing about the concerns of the student counsellors at Saxo also left a big impression on me. Some are finding it tough the manage the big requirements and expectations which they are facing today, and we must do our utmost to help them on their way. It was a good experience to take a tour with the students as guides and I’m looking forward to my next campus visit.”

Since the first tour, Wegener has also met students and employees at Frederiksberg Campus. He will visit Nørre Campus on October 9 and City Campus (CSS) on October 25.