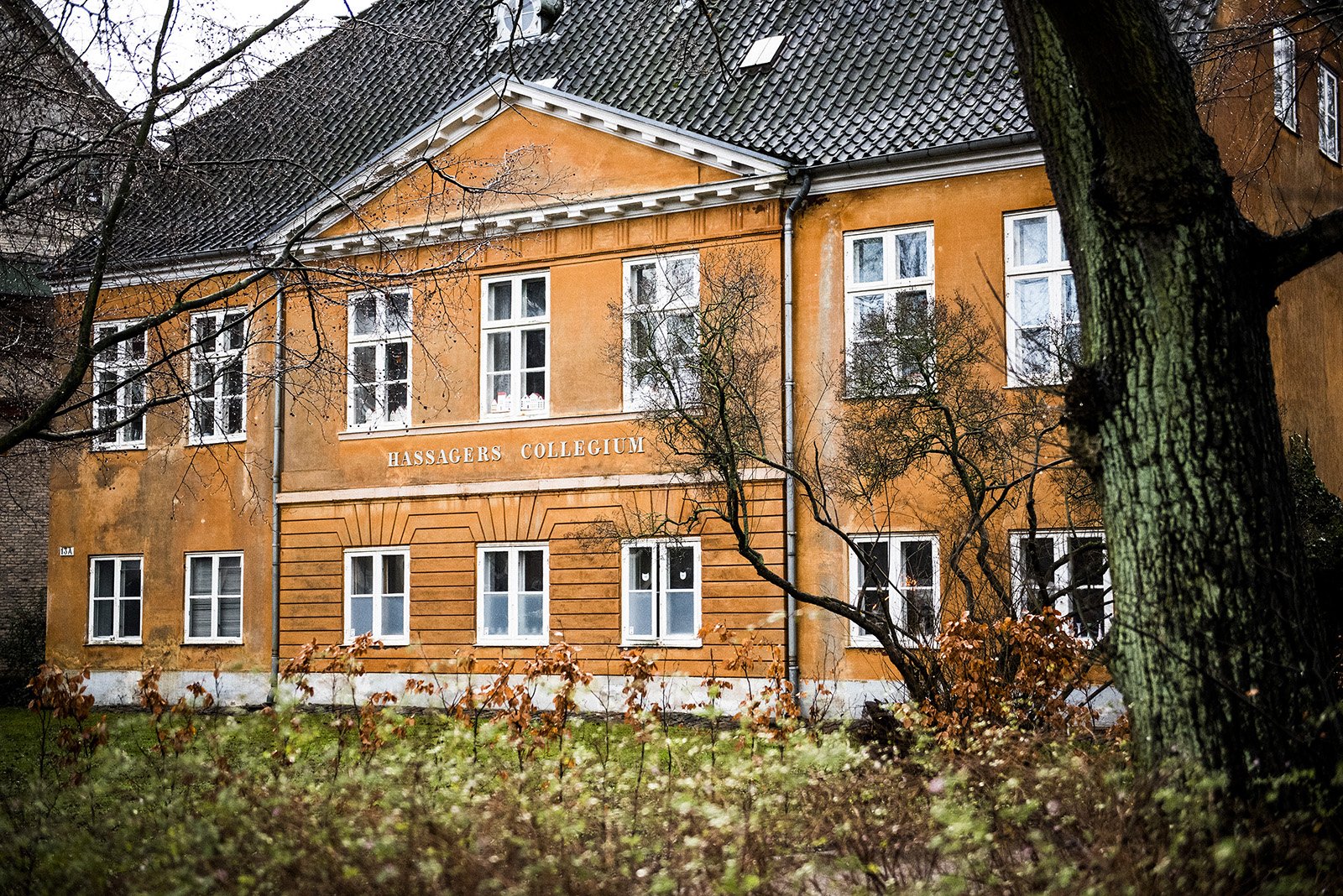 Rector’s new digs - The dormitory ephor of 4. Maj Kollegiet has a two-storey apartment at his disposal. The current ephor says that »it’s a nice, big apartment, but it does need some repair.« The façade reads 'Hassagers' because the building belonged to Dorthea Hassager who stipulated in her will that the property be used for a dormitory. Hassagers Kollegium is an independent part of the collective 4. Maj Kollegiet and Hassagers Kollegium with ten bedrooms available. The ephor is responsible for both dormitories.
image: Rasmus Friis

The rector the University of Copenhagen has applied for and subsequently been offered a position as head of 4. Maj Kollegiet. This according to media outlet Fundats. Henrik Wegener says that he has time to take on the added responsibilities which he calls »a lifestyle« and that living among the students will make him a better rector.

A large two-storey apartment in a villa bordering Frederiksberg Have. That is the compensation rector of the University of Copenhagen, Henrik Wegener, will receive for his new second job as head — or so-called ephor — of 4. Maj Kollegiet on Frederiksberg. Heat and electricity not included.

The independent media outlet Fundats, which specializes in foundations, has covered the story of the rector’s new job, which he received ahead of 22 other applicants, in two articles.

As ephor of the dormitory, the rector will be responsible for financial matters, budgeting, and accounting. He will also manage day to day operations as well as maintain the public interests of the dormitory which among other things entails »raising funds to maintain the infrastructure,« Wegener tells Fundats.

According to Fundats, rector’s new position as ephor was approved by the former chairman of the university board, Mads Krogsagaard Thomsen.

As rector of the country’s largest university, Henrik Wegener makes approximately 1.8 million kroner a year. The job as rector is a full-time position and according to a draft of a new trust deed for 4. Maj Kollegiet, the position as ephor is at minimum »a half-time position.«

To Fundats, Henrik Wegener explains that he expects to fulfil his duties as ephor ‘primarily after hours on weekdays and on weekends’ and that the position as ephor »is just as much a lifestyle as it is a job.«

Department heads are often busier than the rector

»In most cases, ephors are department heads or professors. And a department head at a modern university who is responsible for hundreds of employees and a budget of several hundred millions of kroner is subject to the same level of work pressure as a rector is,« Henrik Wegener says to Fundats.

It is true that other ephors in the past have fulfilled their duties while simultaneously working full-time. Head of the Regensen dormitory Stuart Ward, also serves as head of the Saxo Institute at the University of Copenhagen.

The current ephor at 4. Maj Kollegiet, John E. Andersen, who is a professor emeritus at the University of Copenhagen, has served as department head for years while simultaneously fulfilling his duties as ephor.

»It’s not a half-time job,« says John E. Andersen to the University Post. »And it hasn’t been in practice.«

According to him, it is a misunderstanding and an error that the new trust deed draft states that »half-time employees at the dormitory, including the ephor and the caretaker, are allowed to participate in board meetings,« because it implies that the job as ephor is a half-time position.

It’s the best job in the world.

»I’ve had the job for 16 years and I have never spent half of my working hours on it,« says John E. Andersen adding that he initially applied for the position as ephor to strengthen his bond with the student community. As ephor you live in close proximity to the students and take part in their everyday life.

The newly appointed chairwoman of the board at 4. Maj Kollegiet, Helle Sjelle, who is also a conservative member of the Frederiksberg city council, agrees that the job as ephor is not a regular half-time position.

»It would be hard to clearly asses how much time is spent on this job. Being an ephor is more of a lifestyle than anything else,« says Helle Sjelle.

»The definition of an ephor is someone who lives at the dormitory alongside the young people themselves,« says Henrik Wegener to the University Post. »That’s why I use the term lifestyle. One has to want to be at the centre of social and academic life at the dormitory.«

»It will create a positive synergy with my work as rector. I believe it will make me a better rector seeing eye to eye with the students, whom I at the moment see far too little of.«

Henrik Wegener states that the job listing in no way mentioned how much time the ephor could expect to spend on his or her new duties. He was, however, encouraged to inquire with the current ephor which he did.

»Based on what I have been told, I see no cause for alarm. Even though I am rector of the university I still have time off to myself. My duties as ephor will be handled during odd hours.«

When he served as vice-rector at Denmark’s Technical College, Henrik Wegener adds, he also took on a score of trusted positions in addition to his job. He had to give those up when accepting the position as rector at the University of Copenhagen, but now he has time to take on more duties. According to Henrik Wegener, ephors typically have full-time positions in academia which is also the case at other dormitories.

According to the 4. Maj Kollegiet-website, Henrik Wegener will start his new job on October 1. It is, however, also stated that the handover of responsibilities to the new ephor »is contingent on an agreement being reached between the board and Henrik C. Wegener during the negotiation of employment terms.«

This revision of the original statement in the dormitory’s website was made subsequent to Fundats-journalist Sune Holm Pedersen publishing his story about the new ephor.

It will make me a better rector seeing eye to eye with the students, whom I at the moment see far too little of.

One potential problem is the fact that Henrik Wegener does not live up to the demands of an ephor as stated in the current dormitory rules. An ephor cannot serve in the position »past the age of 60.« Henrik Wegener is 61.

However, current ephor, John E. Andersen, is even older, so if the dormitory board eventually decides to break its own rules in hiring Henrik Wegener, it will not be the first time. The trust deed from 1997 also contains other outdated rules, for instance that part of the board is elected by the university senate at University of Copenhagen, which no longer exists.

According to the media outlet Fundats, Søren Bergenser, a solicitor, PhD, and expert in managerial responsibility in foundations, believes that the hiring of Henrik Wegener is »is completely opposed to the foundation ordinances and thus in violation of foundation legislation.«

Henrik Wegener explains that he does not intend to begin in his new position as ephor as long as the current rules apply:

»I cannot begin my tenure as ephor if the trust deed explicitly states that I am too old for the job. The trust deed has to be updated, and it would of course have been better if that had happened prior to me being offered the position. I was informed that the trust deed was in the process of being updated,« he says.

According to Henrik Wegener, the most contentious point for the dormitory board to decide on is the future admittance of students as there are fewer and fewer direct descendants of freedom fighters in the university student age group. This is in part why the update to the trust deed has been a prolonged affair.

Chairwoman of 4. Maj Kollegiet, Helle Sjelle, says to the University Post that an updated set of rules is in the making.

»It’s a long process which should have ended at our last board meeting which it didn’t, but long ago the board decided to abolish the age limit.« According to her, the revisions have already been sent to the municipality of Frederiksberg for approval. »Henrik Wegener’s new job doesn’t start until October 1. if all goes well,« says Helle Sjelle.

The ephor apartment by Frederiksberg Have is, according to its current resident John E. Andersen, »a nice, big apartment, but it does need some repair.«

»It’s a lovely building. I loved living there,« he says.

However, John E. Andersen explains that the free housing is not tax exempt.