What the dean learned from his boxing match 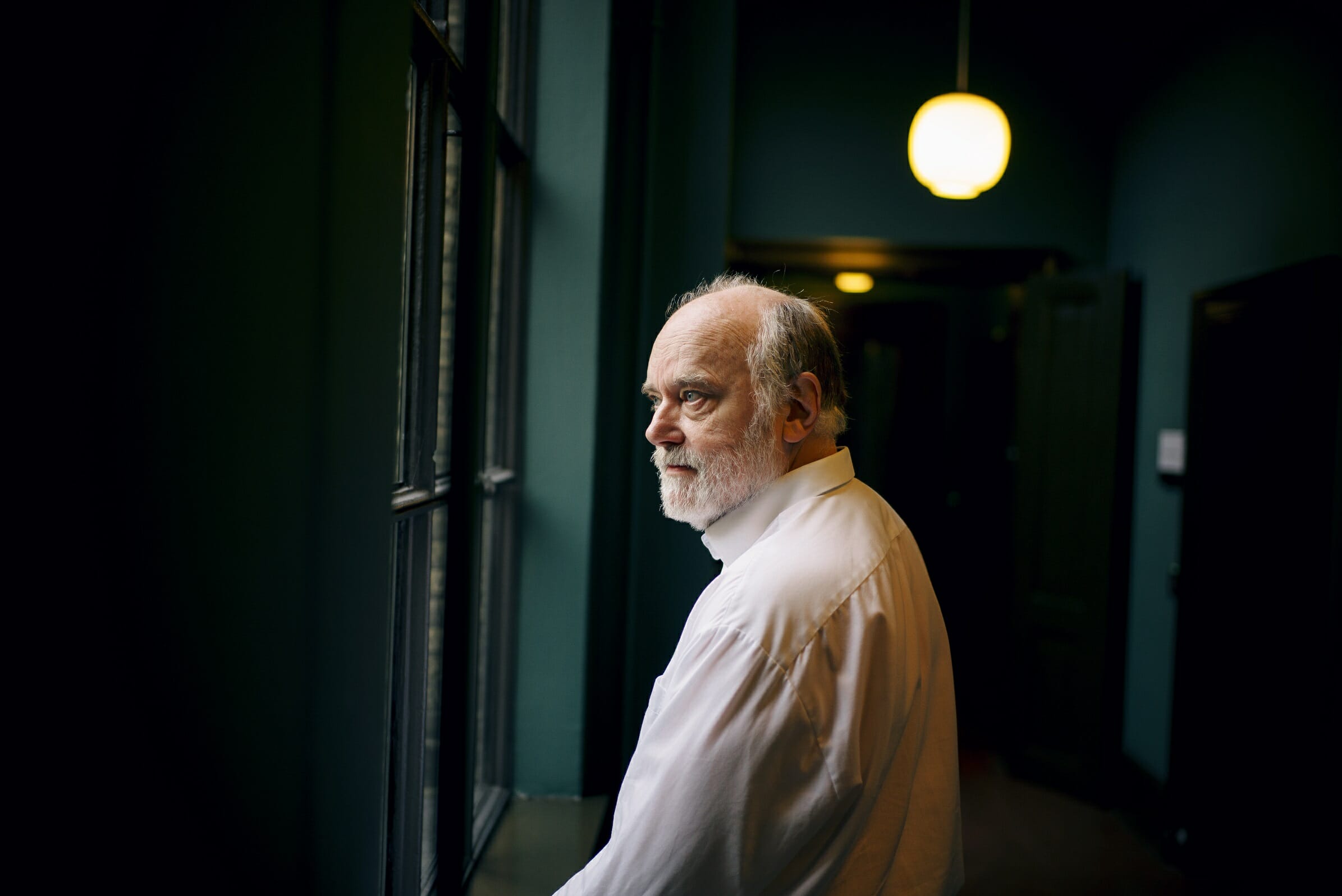 The season’s golden leaves glint outside. John Renner Hansen is found out in nature when he is not managing the Faculty of Science's 9,500 students and 4,500 employees.
image: Daniel Hjorth

Portrait — John Renner Hansen describes his unconventional trajectory to an academic career, where he needed both a Plan A and Plan B, especially in his duties managing scientists and staff as the dean of Faculty of Science.

With his impressive height and chest width, he looks like a kind of alpha when he rises and raises his hand in greeting. This first impression is disturbed though by a large number of animal figures scattered across the surfaces of the dean’s office: owls, elephants, turtles, bears, and a pair of elves, because “elves live all year round,” he says.

John Renner Hansen, Dean of the Faculty of Science since 2012, has many temperaments, I note, having squeezed myself into the dean’s packed calendar one November morning in the picturesque grounds on Bülowsvej to gain an impression of the man behind the power.

I always say to young people, they must have a Plan B, which is almost as good as their Plan A.

Renner Hansen is a professor of high energy physics, with over 500 scientific articles in his portfolio. But while today he is responsible for the development of science, his academic career was very close to not taking off at all.

He explains that after he received his Masters in physics, he began a secure life as a high school teacher, homeowner and soon-to-be parent, when one day in 1980 a telegram landed on the kitchen table with the offer of a fellowship at CERN, the renowned European laboratory for nuclear and particle physics in Geneva.

“That was a turning point. I had applied for a position which I did not at all bank on getting. It was my dream, but for many psychological reasons I had pushed it away, and I was actually quite pleased with my Plan B,” says Renner Hansen. (In the vein of a high school teacher, he adds: “I always say to young people, they must have a Plan B, which is almost as good as their Plan A.”)

But suddenly his direction changed course completely.  With support from his wife, his house in Hillerød was rented out, and Renner Hansen even left behind his trusty flute, which he had played for several hours a day since childhood.

“You can’t both pursue a professional research career and keep up with your instrument. You must choose. It sounded awful, and ultimately I didn’t even feel like hearing it myself,” he said, noting that today he fills the room with the sounds of other musician’s interpretations of Carl Nielsen, his favourite composer.

Lives in Nivå with his wife, professor Birgitte Carstens, with whom he has two grown children

1980-86: Researcher at the European research centre for nuclear and particle physics, CERN

2002-: Professor in particle physics at the Niels Bohr Institute

Renner Hansen ended up at CERN for a total of six years before he returned home before – now with an international reputation – to several two-and-three-year employment stints at the Niels Bohr Institute (NBI) until he was finally employed as a professor in 1995 on a fixed contract.

“I take like a fish to water at NBI, where I also became the head of the institute in 2005,” says Renner Hansen, explaining that he wanted to head the institute because the perspectives on university management had transformed over those years:

“In the old days, it was called the institute ‘manager’ which says a lot about how these positions were viewed back then. A manager is a kind of dispatcher, who ensures that things go as well tomorrow as they did today, but individual initiative was not preferred.”

The new management policy at the universities introduced in 2003 instead emphasized that the head of an institute was expected to push strategic development and at the same time, can be held responsible for it. A power, that Renner Hansen was eager to have, and which he was awarded.

From celebrated head of the institute …

Seven years later, Renner Hansen’s candidacy for the dean position was unanimously welcomed, says one insider from the then-recruitment committee.

It was widely recognized that Renner had been hugely successful during his seven years as head of the institute, not least by establishing a research centre. He praises his employees:

“It was not my success, it was my employees! There is not one of the centres, which is not built by fantastic competences. What I can say I have had success with, is daring to provoke and stimulate, and trying to help where a possibility of success may not be completely obvious.”

And it was not just the newfound approach to management which attracted Renner Hansen, he says:

“It was a hugely exciting challenge. When you bring things together which were traditionally separated, many exciting things can spring up in the intersections. I had the interdisciplinary collaboration between NBI and the Department of Chemistry at the Nano-Science Center to draw on.”

Today, five years later, Renner adds that this potential possibility is not capitalised on enough, which is why his SWAT analysis of the faculty’s development still envisions more collaboration across the internal institutes and with other faculties.

“We still have researchers who have no idea what their colleagues a few metres down the hall are working with,” says Renner, shaking his head to emphasise that it is utterly hopeless.

“But when you ask why I applied for the job, it was because I believed that my experience could help drive the development forward.”

… to the battling dean

It can be challenging to lead university employees, noted Renner Hansen, when in Autumn 2014 he developed a plan for a merger. For reasons that we will not elaborate on, the dean imagined a merger of Department of Computer Science and Department of Mathematical Sciences.

At a hearing regarding the plan, one employee after another from the respective departments delivered damning criticisms of the plan and its designer. After a meeting lasting several hours, Renner Hansen looked like an exhausted boxer, but he took all the hits and remained standing.

It was regarded as a huge defeat

He brings up the episode in the interview – not as a low point in his career as one would believe, but as a learning process which taught him a lot about human reactions and diplomacy – which is why he embraces the boxing metaphor.

“It was extremely uncomfortable. I had not expected that people would celebrate, but nor had I expected that there would be a kind of mob lynch. But that said, the resentment is attributed to the feeling that management never listens, and I certainly represented that, because we would have carried out the plan no matter what. That was probably the reason why, the resistance surged all at once.”

Ultimately, however, management did listen and the merger plan was scrapped. The dean announced this to the employees six weeks later, and the entire affair was seen as a huge defeat for faculty management:

“It was regarded as a huge defeat. But as we clearly had no support for a merger, we did something else. And the positive was that we secured a collaboration after and when we look at the institutes today, they are completely on the right track. We didn’t achieve it with elegance and speed, but so be it. This is absolutely one of the situations, I have learned the most from.”

Renner Hansen points to a little clay figure on the bookshelf, made by artist Rikke Rabben. It is a lumpy, doughy figure with a slightly bowed head and arms stretched out to the sides in a gesture.

“I really like this one. It reminds me of being able to say “oh okay, so be it.”

The story of the collapsed merger plan reveals something about Renner Hansen’s management philosophy: he eagerly takes power, but he will not wrestle for it. He’d rather throw his hands in the air.

“I am very committed to taking responsibility, where I have the opportunity – or to transfer it to others – or otherwise keeping out of it.”

When asked about the toughest decision he has made as dean, there is a moment of silence in an otherwise steady stream of talk:

“Cases where I have had to decide on dismissals. It is really, really hard and it demands many uncomfortable considerations, because it has impacts in many different ways. Otherwise I will say, that decisions are often completely … natural. That is, when it’s about people, it’s hard. I don’t deal with difficult decisions on a daily basis where I would say “I wish I didn’t have to make a decision.”

Renner Hansen says that one of his weaknesses from a managerial perspective is to sometimes mull over a decision a little too long:

“I sometimes wait a little too long when it comes to making a final decision, which can be stressful for those waiting on the outcome. Some would say that it is good, because the decision is therefore better founded, but there is of course, a balance.”

It is important for Renner Hansen to clarify that he does not deal with decisions alone. He has trusted advisors both far and near:

“Most of the decisions are made on consensus. If people among the group of managers do not agree, we discuss the case again, until I feel confident.”

There is a clear answer when it comes to the question of what Renner Hansen would change if he was free of all restrictions:

First and foremost, he would fix the infrastructure. Of all the new buildings plagued by scandal, which the University of Copenhagen has long battled with building management over, both the Copenhagen Plant Science Center (which finally appears close to completion) and the Niels Bohr Building (which no politicians can apparently manage successfully) fall under Renner Hansen’s territory. And the dean is sick and tired of it:

“It is a huge challenge that we’re not in a position to tell our employees where they will be in five years. Many of our buildings are in such a state, that we cannot become known for allowing to have employees sitting in them.”

As to the question of what we should look after most, the answer is all about people:

“Our employees! We must look after them to not stress people out. We often experience confrontation between individuals from different groups which are completely unnecessary, for example, when a professor yells at an office employee who doesn’t stand a chance of changing things,” says the dean, adding that it is management’s responsibility that all workflows are clear and responsibility clearly defined:

“When people are stressed, they don’t produce either what they would like to produce or what is expected of them, and I am aware that it is really easy to sit in this office and state this, but we should be looking after our employees really well.”

Before we say farewell, Renner Hansen manages to recommend a record from 1965, where Bernstein conducts the capella in the Royal Danish Theatre in celebration of Carl Nielsen’s centenary:

“At a management course, we had to say what piece of music has had the biggest impact on us. That was my answer. Here, Bernstein’s mimic captures the entire experience, and he gets the best out of all the instruments.”