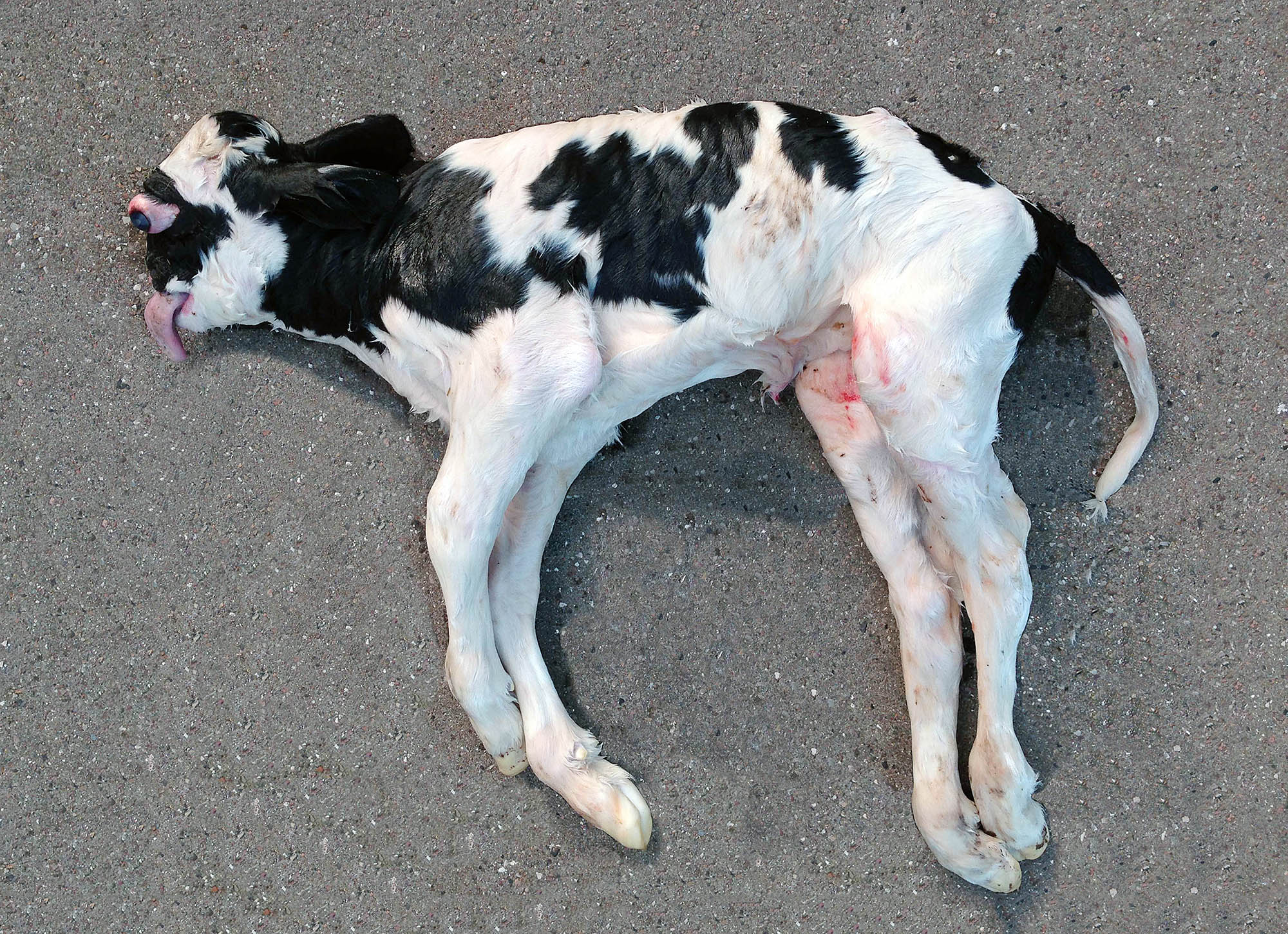 A Holstein calf with a deformed face. The eyes hang out 'outside the head' and the calf cannot survive.
image: Jørgen Steen Agerholm

Mutations — Professor Jørgen Agerholm from the Department of Clinical Veterinary Medicine, who has researched hereditary cattle diseases since 1989, has uncovered a completely new disease due to a mutation in a breeding stud.

Newborn calves with eyes hanging outside the head and with facial deformities that make it difficult for them to breathe.

As a vet, it is probably the welfare of the calves, which is the most important to me, because you need to avoid breeding animals that suffer.

It is a previously unexplained bovine disease in black and white Holstein-Friesian calves.

It has been named Facial Dysplasia Syndrome (FDS), is  and derives from the calf’s father, says Professor Jørgen Steen Agerholm from the Department of Clinical Veterinary Medicine at the University of Copenhagen.

He has helped track down FDS to one particular stud bull, which has now been taken out of operation, so no calves are produced with the disease.

Jørgen Steen Agerholm has studied mutated cattle diseases since 1989, when he did his PhD at the former Agricultural University. He has retained his scientific curiosity for new discoveries.

“It’s a fascinating process, from getting calves in for research from different places in Denmark, to one day discovering that there is one particular bull that can be traced in all of them,” says Jørgen Agerholm enthusiastically.

That’s how it happened, after about a month of work ‘we got a hold on FDS.’

“I got a scientific kick out of it when what started as a discovery on a very average afternoon suddenly has me realizing that the gut feeling I had when I first saw the calves’ deformities was true: That FDS is actually a genetic disease,” says Jørgen Steen Agerholm.

The professor likes to celebrate these results at home.

“It’s an evening where you drink a nice bottle of red wine,” he adds.

There are always new mutations

It is not unusual for mutations to occur in breeding studs (and in other individual animals), because all bulls are the bearer of one or more genetic diseases.

“I’ll never be unemployed. We exterminate one disease after another, but the mutations never end, because that is the way biology is. It is part of the problems linked to intensive breeding, where a single elite bull can ‘father’ maybe 20,000 calves,” says Jørgen Steen Agerholm.

He has therefore also cooperated with, and received financial support from the cattle farming industry since 1989.

“Cattle farmers support our research, because the things we find here at the Department of Clinical Veterinary Medicine are something that cattle breeders can immediately use to improve both their animal welfare and their finances,” says Jørgen Steen Agerholm.

The Department of Clinical Veterinary Medicine has good contact with practicing vets and inseminators who give notice whenever a deformed calf is born somewhere in the country.

In addition, all cattle in Denmark have a family tree that might go back 10 generations, explains Jørgen Steen Agerholm.

He studies these to find patterns that indicate that there is a mutation somewhere that can give the calves a hereditary disease.

0.5 per cent had deformities

It gives him personal satisfaction when he can reveal a new disease.

“As a vet, it is probably the welfare of the calves, which is the most important to me, because you need to avoid breeding animals that suffer. Of course, there is also a financial aspect to it, because the farmer takes a loss on the calf. Certain deformations also affect the cow itself. It may be that it cannot feed the calf, so it needs to have a caesarean section, or it might have a reduced milk yield,” says Jørgen Steen Agerholm.

In the case of the bovine disease FDS, the breeding stud had a dominant mutation in the cells among its sperm producing tissue, which it proceeded to give on to 0.5 per cent of the calves that were its offspring. The bull managed to sire 2,000 calves. Some had FDS, and they died either by themselves or had to be put down.

Some cases are more difficult

In the case of the dominant mutation FDS in the bull, it was not difficult to find a solution. When the mutation is sufficiently harmful that it leads to financial loss and the calf suffers, the stud bull is slaughtered.

However, if it is a non-dominant, recessive mutation, where the calf needs both a copy of the mutation from the cow and from the bull  to develop the disease, an effective solution may be harder to find.

“In these cases, more bulls have typically been involved and these are often very important animals in the breeding process,” says Jørgen Steen Agerholm. He explains that at one point or another, the defective gene from a heavily used stud bull begins to ‘meet’ related parents, and then defective calves are born.

“You have to re-assess how you will fight the fight every time, and you make an animal welfare and economic assessment of each disease,” says Jørgen Steen Agerholm.