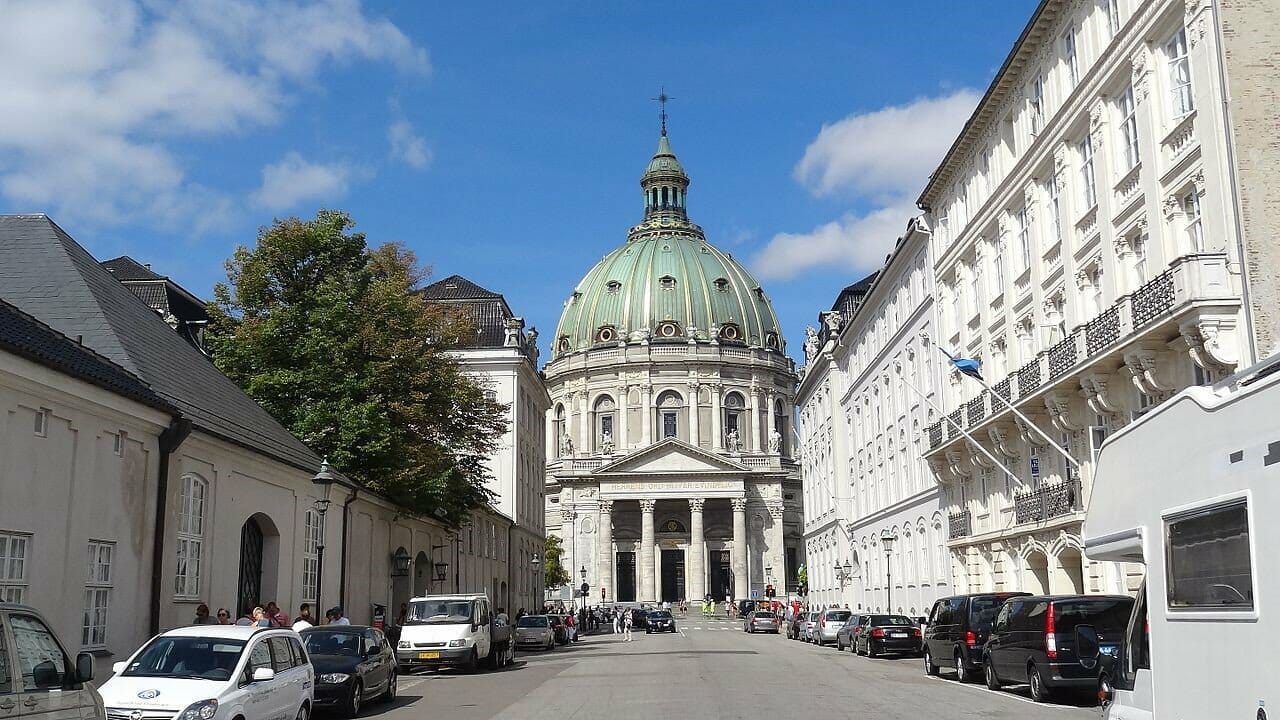 Copenhagen has gone through centuries of modernisation and has had its share of disasters such as fires and wars. But subtle historical details remain. Two historians met up with us in places that reveal the city’s past.

Morten Lander and Emma Rønberg are the two authors behind a just-released guide to Copenhagen. 22 Ture i København Som du Skal På, or ’22 Walks in Copenhagen You Have to Do’ takes you through each district of the city.

So when the University Post asked for an interview, it was no surprise that they suggested a specific location where we should meet up.

For Lander, it was the Ørstedsparken. 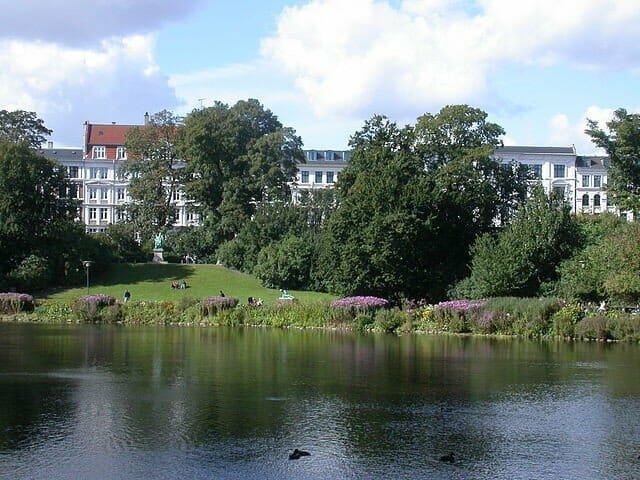 Ørstedsparken in Copenhagen looking outwards from what used to be inside the city walls
image: discosour from New York, Creative Commons license

Both rapid modernisation and disasters, such as fires, have meant much of historical Copenhagen no longer stands. It is therefore the subtle details of contemporary Copenhagen which, for Lander, best express the city’s past.

»The names Nørreport and Østerport are due to the real city gates or ‘ports’ which used to be there.  Tivoli is part of the old fortification as well, and it is where the edge of the city used to be. Now it is very central so, this is a good way of thinking about Copenhagen because modern Copenhagen is a lot larger than the old city. The walls were a kind of limit of the old city and when they decided to take down the ‘ports’ and drop the fortifications, Copenhagen just exploded.«

»It’s funny, this book is about tours in Copenhagen, but it includes Frederiksberg, which is actually a city for itself, they have their own mayor. You can’t really see where Copenhagen ends and Frederiksberg begins, it has just been swallowed up. So, there are a lot of old cities around, further outside, which have become part of Copenhagen. Anyway, this could be a way to view the city, if you knew that the parks were a part of the fortifications.«

You can still see some physical remnants of the city’s past. You just have to pay attention and know where to look. Lander points to the remains of Jarmer’s Tower at a busy intersection just outside the park. 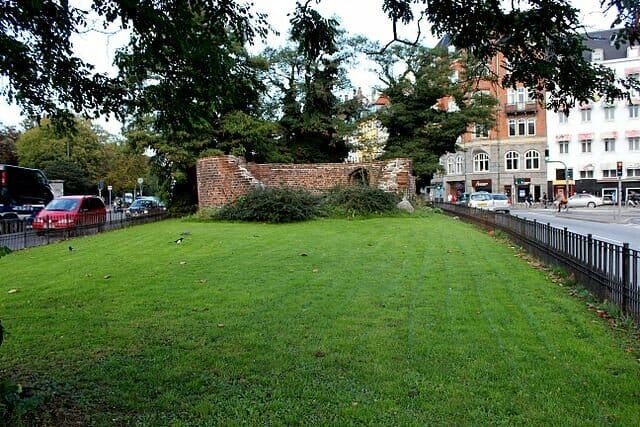 »A lot of people don’t see it, but the small tower is what remains from the fortification. There were many towers around Copenhagen, but they have all been torn down. It says it is from 1525 but its origins go back to the 13th century as it is named after a man called Jaromar who attacked the city and broke through the fortification where this tower was built.«

He then leads the way to the Church of Our Lady [Vor Frue Kirke] for another of the city’s hidden gems. Although magnificent, it is not the church itself that is of interest but the crypt underneath which is accessible through a door and a spiral staircase at the back of the church. It contains tomb stones and remnants of the old church which stood in this place before. It has recently been converted into a museum open to the public but not many people know about it. In fact, Lander admits, despite being a city historian, he himself had only learnt about it recently.

»Copenhagen is a really difficult city to write about as history because there is really not a lot left and much has changed. If you looked at a picture of Copenhagen in the 1940s or 50s it would look quite different. A lot of old buildings have been taken down because they were really horrible. It was a ghetto, and it was not very popular to live in Copenhagen. People were poor and if a fire came again it would have been a disaster. At the time, [city planners, ed. ] had phantasies of skyscrapers; New York was a big inspiration. Luckily, they did not get that far with their plans.«

»The city has changed so much, especially since the 1980s and 90s. In fact the original book which inspired this one, 111 Places in Copenhagen That You Must Not Miss, included Paper Island which now no longer stands despite being very popular.«

Even though I absolutely love Frederiksstaden, and it’s absolutely wonderful with the royal stuff, I am in love with Amager because it has a unique story, it’s changed a lot and it’s still changing.

Lander believes one of the city’s most unique features is its accessibility through public transport, cycling and especially walking, which allows you to get the most out of the City. The many churches dotted around Copenhagen, like Our Lady or Sankt Petri just around the corner, can be used as reference points to navigate the maze that is the old city streets. He admits the irony of the British using the same churches as reference points when bombing the city in their 1807 bombardment. Don’t be afraid to explore, Lander says, and discovering Copenhagen is not just for new visitors.

»I feel like a tourist every day; I can get a thrill every day when I walk here.«

4. Garden of the Royal Library

Emma Rønberg chooses to meet up with us in the Garden of the Royal Library. 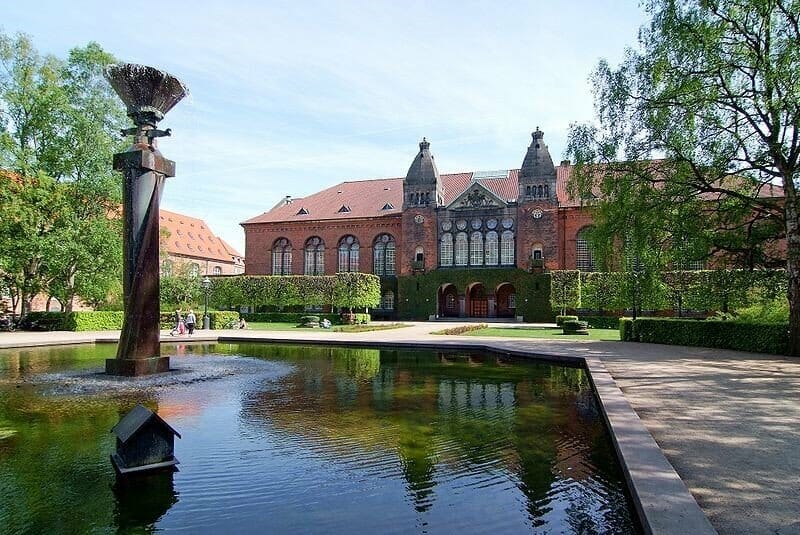 »I think Bibliotekshaven is a hidden gem because even though it is quite hot and it’s almost vacation time there’s not a lot of people here. Also, there is a small café, the Jewish museum is right behind us, and the war museum next door. So, it is a great, central, spot and the new metro line is going to be right outside as well.«

For Rønberg it is green spots like this garden which make Copenhagen unique. It is a very green city both in terms of landscape but also in terms of sustainability. Being able to get around the city easily is a big part in this.

»It’s easy to get around. Most of the museums are quite easy to get to, for example. They are not that cheap, but you can see two or three together because they are quite close to each other.«

Rønberg emphasises history as an important part of exploring Copenhagen.

»I love royal history so if I were to take someone on tour, I would take them to Frederiksstaden and then maybe Christianshavn as well because it tells the story of our most famous kings, Christian IV, who is a big part of Copenhagen. We also just got another new statue of him as well; can you believe it! I also love the area around Amalienborg Palace, where the queen lives, all the houses out there are from the 1700s and I think it’s a beautiful part of the city (quite expensive) but beautiful because it has so much history. Not just royal history but also the story about how we had colonies as well because lots of the buildings were built on money from the colonies, which lots of people forget. It’s a dark period of history but it is really interesting, the 1700s sort of shaped Copenhagen.«

When a city develops as quickly as Copenhagen, you should pay attention to the changes, Rønberg says.

»I like looking into the history but also how much the city changes, I used to live in Amager and it used to be a working class neighbourhood with gangs and shootings. Nobody really wanted to live out there but around ten years ago it suddenly became a bit more modern and now young academics are moving there. Even though I absolutely love Fredriksstaden, and it’s absolutely wonderful with the royal stuff, I am in love with Amager because it has a unique story, it’s changed a lot and it’s still changing.«

This is not a typical tourist book of Copenhagen. Although there are talks of perhaps releasing an English version, the book is in Danish for Danish people and this is part of why Rønberg took part in the project.

»I love Copenhagen and I love history, I also do tours sometimes and I think it is interesting to just know stuff about your own city because more often than not we think of tourism as something to do in other cities and we never really see our own city. For example, one of the tours in the book is through Østerbro. I don’t know much about it, I’ve never actually been there much but I really like that tour. One of my friends lives there and he says that the part of the book on Østerbro is quite good. He was born and raised there, and it has things he didn’t know before.«

You should not be afraid to do the stereotypically touristy things, she explains. Maybe with the exception of the overrated Little Mermaid.

»I think the area where you find a lot of the museums is developing a lot. The view from the Rundetaarn is spectacular. Just like Christiansborg which has a tower which opened a few years ago. It has a restaurant and the view is phenomenal. Sometimes we forget we can see quite a lot of things for free in Copenhagen, one of the most forgotten museums is David’s Samling which is right next to Rosenborg Castle, it’s a beautiful small museum and it’s free. Many people forget about it, but it has one of the most interesting collections.  It houses one of the best collections of Islamic cultural pieces. It even has a Quran with a picture of Muhammad in it.«

Rønberg explains that the trick to discovering the city is to just ask. Ask people who work at museums, for example, because they often know weird, interesting things or even ask people you know, you might be surprised by what you find out.

And if all else fails, you can always go on a canal tour.