Solved astronomy mystery after just one year at university

»I don't know whether this is, in fact, what they are calling a scientific breakthrough. I like to think that it is, because then you really feel cool,« says Johann Bock Severin (centre) about the project, which has stunned the research field of astronomy. Christian Kragh Jespersen (left) and Jonas Vinther (right).
image: Drude Morthorst Rasmussen

Breakthrough — Three first-year students have found a way to detect violent explosions in distant galaxies. Now, one of them owes a round of beer because his name is stated as lead author on their international breakthrough article.

Christian Kragh Jespersen owes two classmates a crate of beer. This is not uncommon among students. But this time it is not just because someone screwed up at the last Friday bar.

The 21-year-old physics student owes his classmates Johann Bock Severin and Jonas Vinther some brews because he is first on the list of co-authors of a groundbreaking scientific article that the three men have been working on ever since the first year of the physics programme.

I don’t want to lie: I was blown away when I got an email addressed to Dr. Jespersen the first time.

When researchers in the future cite their article in The Astrophysical Journal Letters, there will be a short parenthesis with the words Jespersen et al., 2020. And it will, most likely, be cited. Because the three students are behind a real scientific breakthrough in the world of astronomy.

They have detected gamma-ray bursts, short-duration, violent explosions in distant galaxies, and finally demonstrated that it is possible to divide them up into two groups, like researchers have tried to do so since 1977.

And because Christian Kragh Jespersen is at the front – as the corresponding author – he is suddenly getting e-mails from researchers, journals and supporters of conspiracy theories from all over the world, even though he is just about to start the third year of his bachelor’s degree this September.

»I don’t want to lie: I was blown away when I got an email addressed to Dr. Jespersen the first time.

It all began in the second semester, when the three talented students ended up in the same project group. One of them had stumbled over a thirty-year-old problem in categorising the gamma-ray bursts that no one had really been able to solve.

Johann Bock Severin explains what the three students have done:

»I’ve tried to think of a good metaphor, and you might be able to compare it with understanding words. When you hear a word, you can either register it is a word that is accentuated or not, or how many syllables it has. Previously, we only sorted the length and strength of the gamma-ray bursts. Now we look instead at the shape of the gamma bursts (how they vary in intensity), which makes more sense. It’s a bit like when you don’t understand words until you know where the emphasis is, and until you hear what letters are being pronounced.«

Until now. Because the three students have succeeded by using an unconventional method within astronomy: machine learning. In recent years, they have fine-tuned their work, which was published as a scientific article shortly before the summer vacation. Here they show how you can clearly separate long and short gamma bursts if you take a closer look at the shape of them.

Gamma bursts are some of the most energetic phenomena in the universe. They don’t last very long, but signal a violent explosion that, according to researchers, comes from exploding supernovas or stars.

Apart from this, the researchers do not know much about gamma bursts. And although Christian Kragh Jespersen, Johann Bock Severin and Jonas Vinther have spent a great deal of time studying the theories, they still consider themselves to be newbies in the field.

»The great thing about astronomy is that you have these problems that nobody can really solve. You just have a lot of observations. So even if you don’t know much about it in theory, it’s relatively easy to get into it if you have an interest in looking at statistics and machine learning,« says Johann Bock Severin. 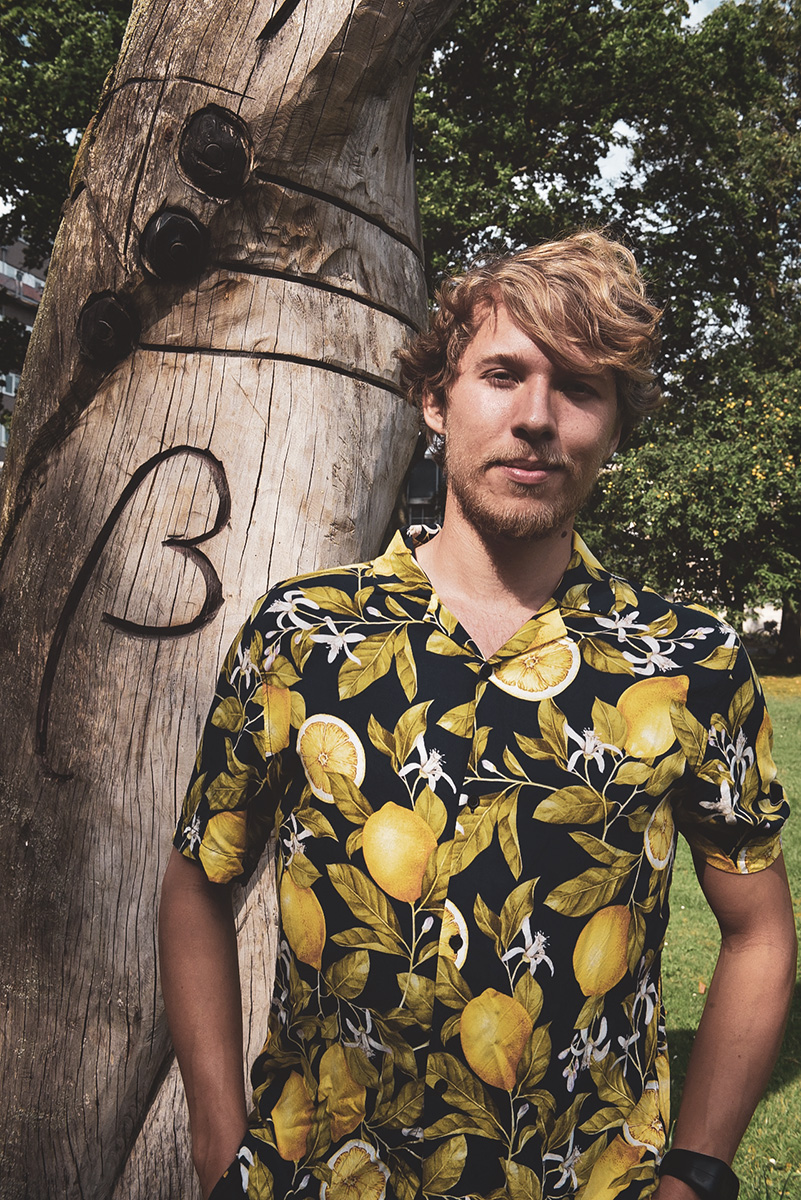 Christian Kragh Jespersen has spent most of the summer holidays in front of his computer answering e-mails from all over the world.
image: Drude Morthorst Rasmussen In fact, none of the three physics students have taken astronomy courses at university, which is why Johann Bock Severin also laughs when he says that he »still doesn’t really know what gamma bursts are.«

Perhaps this is also why Johann Bock Severin is modest when he assesses what their work will mean for the world of research:

»I don’t know whether this is, in fact, what they are calling a scientific breakthrough. I like to think that it is, because then you feel pretty cool,« says Johann Bock Severin.

»Oh yeah, we just did that«

The three physics students were on edge last year when they had to present their results to a research group at the Niels Bohr Institute (UCPH), which is called The Cosmic Dawn Center (DAWN). One scientist In particular – who has worked with gamma bursts since 1977 – was sceptical about the idea, according to the three physics students:

»I think there were two master’s degree students, the rest were PhDs or professors – and then there was us, three first-year students, who said: Look what we just did. This is still one of the most nerve-wracking things I’ve ever experienced,« says Johann Bock Severin.

But the sceptical scientist was left speechless for a moment during the presentation, according to Christian Kragh Jespersen, and then he was suddenly singing to a different tune: The research had to be published, and they suddenly had to make haste.

»You work a bit for thirty seconds, where you can get all the older professors, who have been here for so long and know everything about everything, to say: Damn, that’s cool!« says Christian Kragh Jespersen.

Johann Bock Severin simply calls it a »good experience«. The response from fellow students actually meant more to him:

»The strangest thing is almost that an article has been published on the Niels Bohr Institute’s website. Because then you pass a big screen down at the institute, where it suddenly states in large print: Students behind huge breakthrough. I always feel like: Well, so, this is what we also did,« says Johann Bock Severin.

Back to the crate of beer. The three young men have not really had time to celebrate their major breakthrough during the summer, so Jonas Vinther and Johann Bock Severin still have a crate of beer coming. All three of them are fully active on several research projects, both together and separately.

They involve a lot of coding work, but fortunately none of them are averse to sitting in front of a screen on a hot August day.

Christian Kragh Jespersen has also been busy answering e-mails at the end of the day – this is what comes with the territory when you are lead author on the article which was published in Astrophysical Journal Letters, a highly respected journal in astrophysics.

It might be smaller journals that try to flatter them into writing a post for them. Or just researcher spam, where someone under a false name invites them to give a ‘famous keynote speech’ at a biology conference. Sometimes, hidden underneath all this, there will be ‘cool questions’ from theorists who want to use their knowledge for their own research, according to Christian Kragh Jespersen.

The three young physics students are still curious. And they are undaunted by virtually anything that includes large amounts of data, and that are physical phenomena:

»Most of science is about trying to muddle your way forward. You rarely know whether it will work before you start. If you did, you had already solved the problem,« says Christian Kragh Jespersen. 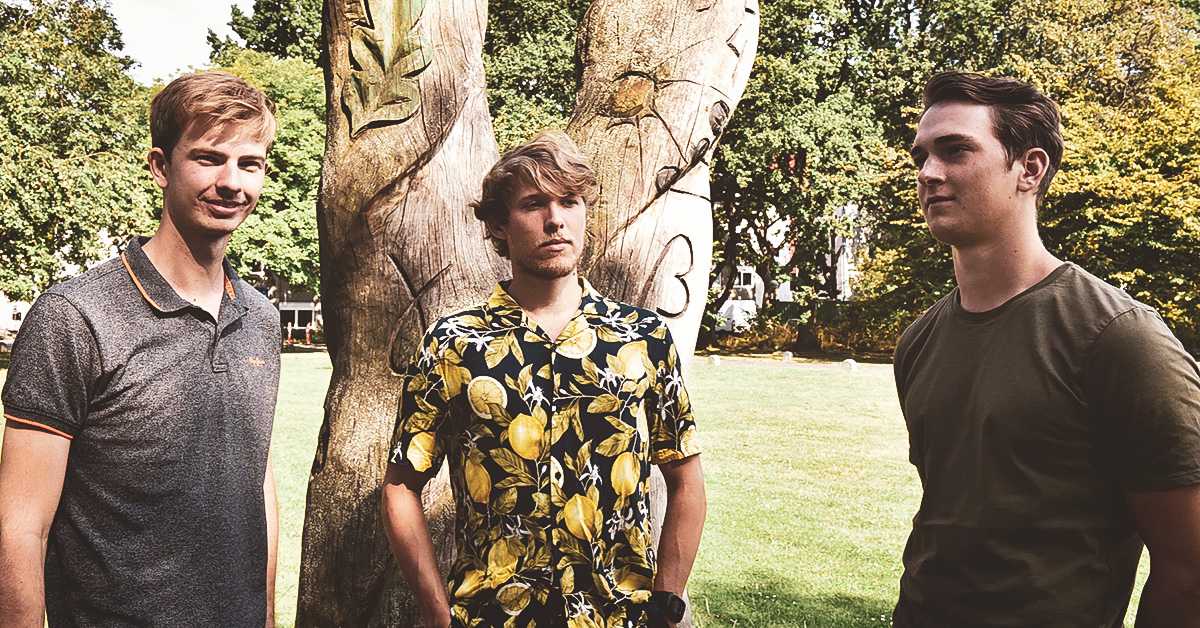