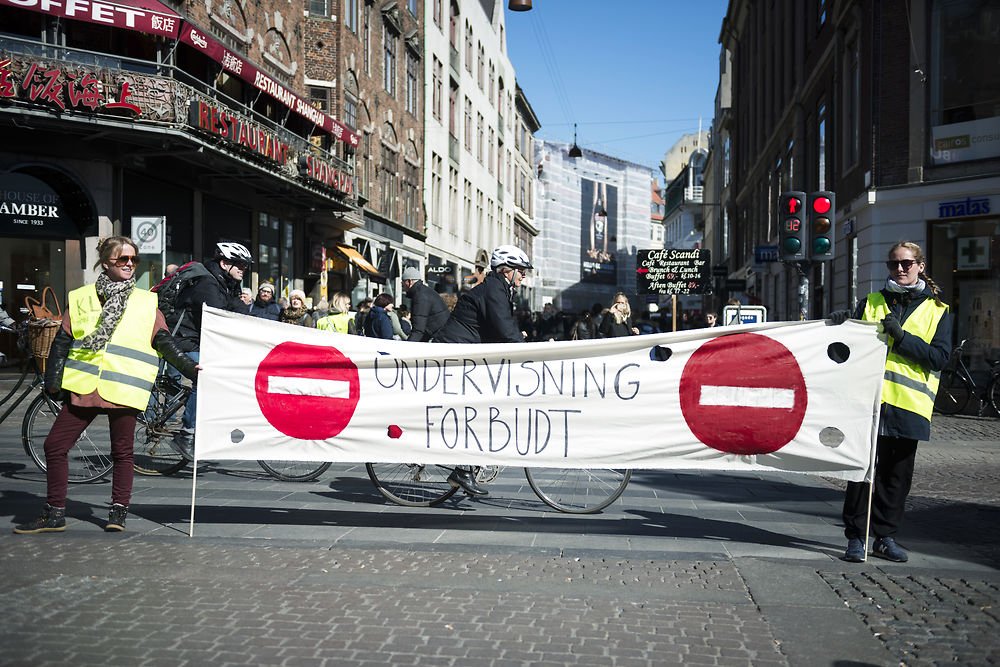 Teachers striking during the 2013 lockout. The bargaining on collective agreements could lead to an even wider dispute that will also involve state employees, like at universities.
image: Polfoto/Christian Lindgren

Collective agreements 2018 — Staff reps at the University of Copenhagen (UCPH) are preparing their colleagues for a possible strike and are calling on them to sign up to the AC union to get strike pay.

Staff representatives are now trying to recruit new members among academic staff at the University of Copenhagen (UCPH) in connection with negotiations for a new Danish collective agreement.

This is in an email with the title “Sign up for an AC union in January 2018,” which has also been sent to AC (Danish Confederation of Professional Associations – Akademikerne) eligible staff in the central administration.

I wouldn’t say we set off a big campaign.

The staff reps warn of the risk of a dispute, possibly in the form of a strike, and say it is important to be a union member before the end of January.

“Virtually all AC federations have this deadline for enrollment in regard to whether you can get support equivalent to full pay in a dispute situation,” the email says.

According to Signe Møller Johansen, co-chair of the AC-TAP section at the University of Copenhagen, the mail was intended to inform colleagues about the collective agreement situation.

“I wouldn’t say we set off a big campaign. It is fair to inform colleagues that there is an important deadline which they should be aware of. I therefore invited all the staff reps in my area to write to staff,” says Signe Møller Johansen.

She adds that “it is also about solidarity, and about us all standing up for our demands together, so we can ensure that we still have reasonable pay and employment terms. Without a doubt, we are stronger in the negotiations if we have more members.”

Signe Møller Johansen emphasizes that she hopes that an agreement can be reached between the parties, so a dispute is averted.

Virtually all AC federations have this deadline for enrollment in regard to whether you can get support equivalent to full pay in a dispute situation.

This is what separates the two sides

Sara Vergo, chairman of Djøf Offentlig, a trade union for academics in the public sector, says it’s too early to speak of a dispute, since the negotiations have not really begun.

“We are very conscious of not talking up a potential dispute, but it is clear that we are in a difficult situation,” says Sara Vergo.

She does not want to clarify what it is that separates the two sides, but says that it’s important that we “keep control of the paid lunch break” – something that employers would like to abolish.

Another sore point that has been debated in the media is that the Ministry of Finance believes that salary increases in the public sector have been ahead of the private sector over the past ten years. The ministry wants to close this gap in salaries, and wants negotiations to take place in a responsible financial framework.

However, Anders Bondo Christensen, chief negotiator for the municipal employees, says the ministry’s calculations are bogus and just a minister’s campaign.

We are very conscious of not talking up a potential dispute

He points out that the salary adjustment scheme has since 1996 ensured that salaries in the public sector follow the private sector.

Another potential issue is that the ministry in the future wants a larger proportion of salaries to be negotiated locally at government workplaces “to increase the link between employees’ salaries and their performance”, as it is stated in the negotiating draft.

A lot of lunch break talk

Signe Møller Johansen hardly hears any colleagues talking about the salary adjustment scheme, as it is very technical, she says. But colleagues talk alot about losing the paid lunch break.

Its loss would correspond to a pay decrease of 7.25 per cent or 2½ hours of extra work per week.

“This is incredibly provocative to people, as we have dedicated staff at this university who work intensively, and who willingly work through their lunch breaks to finish their tasks. Many of them have accepted that, as a public employee you earn less, but that they in turn often get better working conditions in terms of working hours. If this also disappears, it will be difficult to attract talented staff to public service,” she says.

Any dispute would start on 1st April 2018 at the earliest.