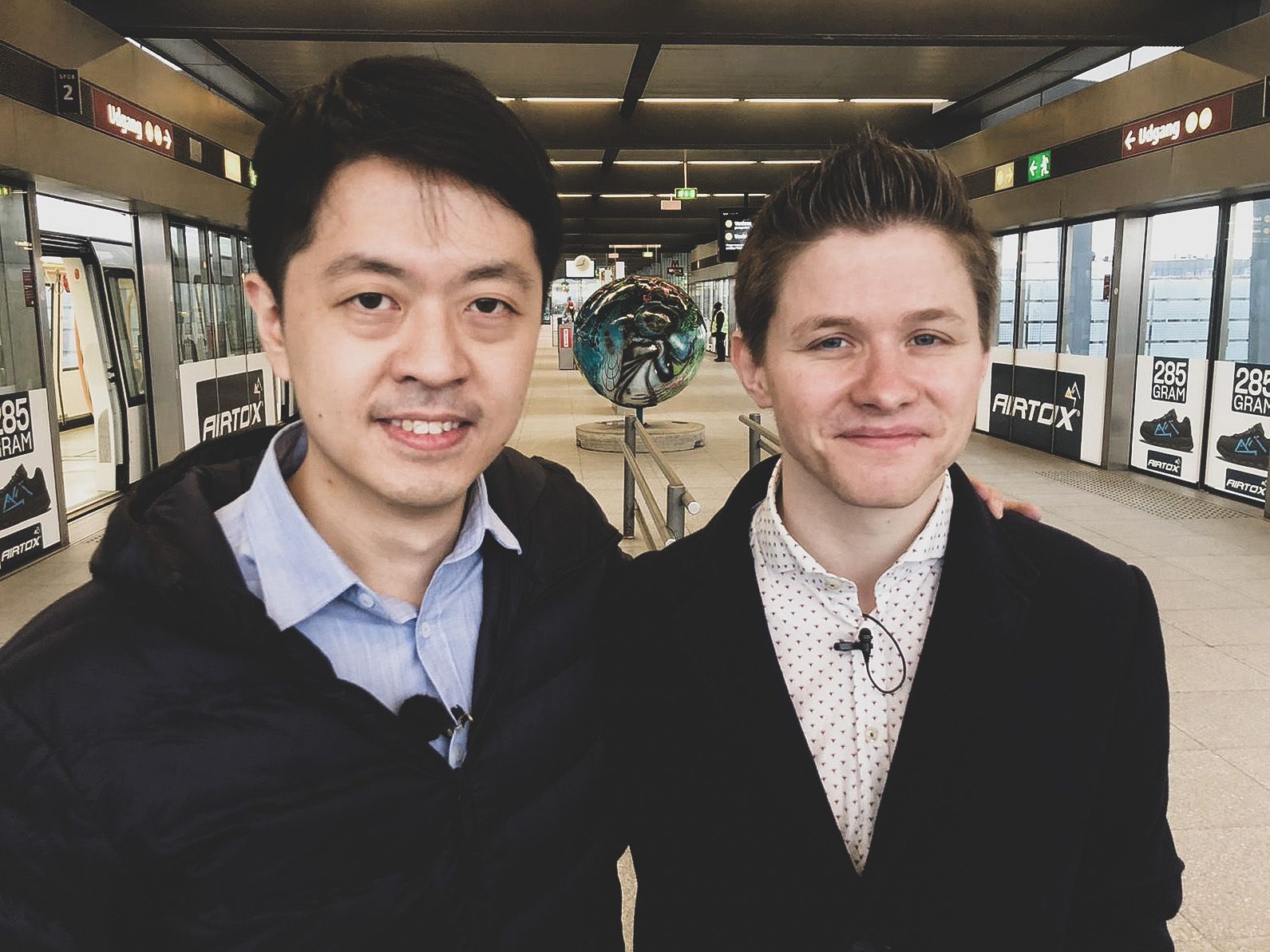 Ted Hui and Anders Storgaard at the airport before Ted Hui went on to London.

Politics — Anders Storgaard is a student of political science and is active in student politics. That is, when he is not deceiving Hong Kong authorities to allow an indicted democracy activist flee to Denmark

When the prominent Hong Kong democracy activist Ted Hui managed to flee to Denmark at the beginning of December, it was partly as a result of the efforts of Anders Storgaard.

But this autumn, he put down his books and took a break from both his study programme and his election campaign.

Instead, he worked on enticing the Hong Kong police force to allow Ted Hui to travel to Denmark to participate in a three-day seminar on climate. A seminar that did not actually exist.

Here is Anders Storgaard’s report on how a student succeeded in cheating the Chinese regime in Hong Kong in the name of democracy.

WHO IS TED HUI?

Ted Hui is a former politician in Hong Kong and a democracy activist.

When he was 15 years old in 1997, Hong Kong stopped being a British colony and was given limited autonomy under Chinese rule.

Among demonstrators for democracy in Hong Kong, Ted Hui is known for his courage. He was often at the forefront of the demonstrations.

Now he is in London with his family.

It all started on 14 September. I was sitting on my couch at home when my cell phone started vibrating. I had got a message from Ted Hui, my friend from Hong Kong, who is also a well-known democracy activist in the country.

I knew that he had been arrested in Hong Kong, but the message said that he had been released on bail. The police had confiscated his passport, he wrote. But he could get it back if I could help him organise some meetings about climate change in Denmark. God damn it! I thought. I took a huge adrenaline hit from worrying.

I figured that he probably didn’t write because he was really interested in getting up and holding a talk on the green transition. He wanted to escape. And I realised that I was in the process of getting myself involved in something that could get very big because there was a big risk. This could make the difference between life and death.

The first day I met Ted was actually here in Denmark in February. He was visiting here with a group of young activists from Hong Kong to meet with various Danish politicians.

I figured that he probably didn’t write because he was really interested in getting up and holding a talk on the green transition. He wanted to escape.

Thomas Rohden, the chairman of the so-called Danish China-critical Association, and the Danish MP Uffe Elbæk had organised a panel debate between the activists and all the chairmen of the youth parties. I was chairman of the conservative youth group Konservativ Ungdom at the time.

After the debate, we went to a small group meeting room at the Christiansborg parliamentary buildings. We sat there drinking wine from cardboard cups talking about what it is like to be young and politically active in Denmark and in Hong Kong and about our dreams and hopes for the future. It was a fantastic evening. I got to know Ted well that evening.

It turned out that we had a lot in common, and we both hold democracy in high regard. But this evening also put my own political life in perspective. If I had been born in many countries other than Denmark, I would probably have been strung up on the nearest tree for fighting for democracy. 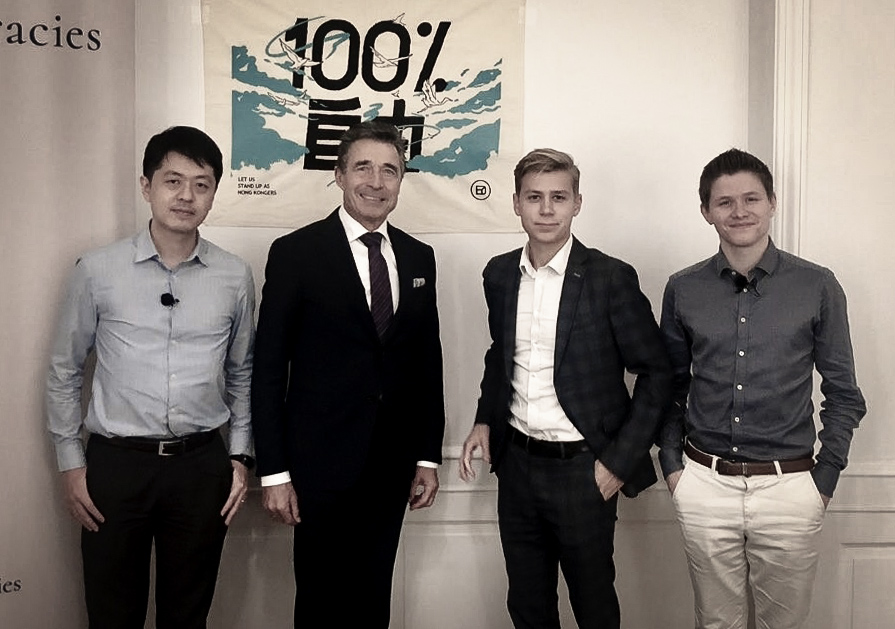 Ted Hui met up with the former Danish Prime Minister Anders Fogh Rasmussen (number two from the left) while he was in Denmark. The current Minister for Foreign Affairs, Jeppe Kofod, did not want to meet him.

While we were planning Ted’s escape in the autumn, we never talked about what the plan really was. It was implied, and we also moved our conversations over to the encrypted Whatsapp. We could speak securely there, even if was never directly directly stated what the plan was exactly. It was simply too dangerous.

I set up fake meetings and a fake agenda. Almost all of it was fake.

China is a major power that is good at eavesdropping. So I was, of course, extremely concerned about whether I had said something wrong to the wrong people. Had I kept myself to the encrypted communication lines, or had I said too much to someone who could have passed it on? I was really worried about the whole process, and I slept poorly at night for weeks.

I organised a couple of meetings and wrote an invitation to Ted Hui. The statement from Hong Kong was that he would be allowed to travel to Denmark before returning to face a court in Hong Kong.

I was very relieved. Now, I just had to wait for him to arrive on the plane. I was in the middle of the election campaign for the university elections at the time as a candidate for the university’s Board for the student group Konservative Studerende, and there was a lot going on.

On the last day of the election, I stood in the marble hall of Frederiksberg Campus and was in the process of giving out coffee and scones.

I got a message from Ted with a picture of a letter from the Hong Kong police asking for a detailed programme. I almost had a cardiac arrest. I completely panicked because I didn’t have a real programme.

I sat down at our coffee booth and started writing around and calling up some people. I called Uffe Elbæk, who I had previously informed about the situation. He got hold of a few of his contacts, and so did Thomas Rohden. So I sat there setting up this programme with fake meetings and a fake agenda. Almost all of it was fake.

It took a couple of hours, and along the way, I was given a ride from the marble hall to South Campus KUA, where I again had to sit behind our booth and work on this instead of sharing out coffee and talking to students. I will be frank with you and say it was chaos and more chaos. 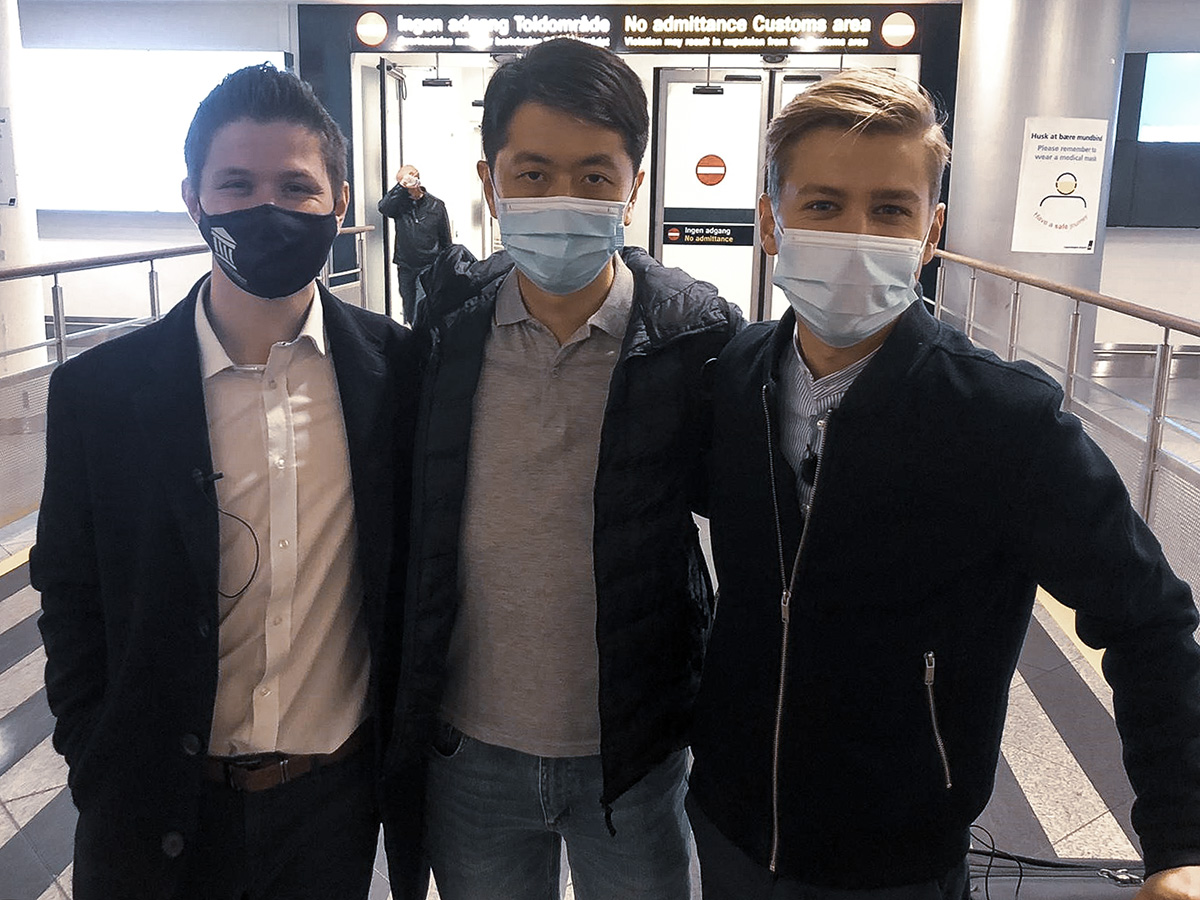 Both Anders Storgaard (left) and Thomas Rohden picked up Ted Hui from the airport. And they took him out there again three days later.

The police in Hong Kong believed in my counterfeit programme. Only when I heard that Ted was on the plane out of Hong Kong, did I dare send him the real programme for his days in Denmark.

At the same time, I did not dare to believe that we would succeed before Ted landed in Copenhagen. Until the end I thought that the Chinese would yank him off the plane one way or the other. I went to the airport in Kastrup to pick him up with Thomas Rohden. It was six in the morning, and it was completely empty.

When a life is at stake, and it can be saved by lying to a communist dictatorship, it is one of the few times when it is okay to lie.

We were very concerned about whether our plan would succeed. We were so excited to see him, and when he stepped out of the arrivals hall, I will be honest and admit that we forgot everything about corona restrictions, and I just ran over and gave him a hug.

We were all three so happy, but we couldn’t breathe a sigh of relief yet, because Ted’s parents, wife and children were still in Hong Kong. They didn’t get out of the country until two days later.

While in Denmark, Ted met up with several Danish politicians. We were particularly pleased that he was given the opportunity to speak to the Danish parliament’s Foreign Policy Committee. There were several politicians who opted not to meet up with him, including the Minister for Foreign Affairs Jeppe Kofod (Social Democrat). This would otherwise have sent a strong signal to the young people in Hong Kong that Denmark is on their side in the fight for democracy.

The argument for not fighting more actively against Chinese tyranny is that we are a tiny country with no real influence.

But even though Denmark is not a large country, people throughout the world still listen. I see this more as a bad excuse, because it’s easier to sit back and pretend that we don’t have any power to change things.

After three days in Denmark, Ted went on to London, where he was united with his family. When he left, I gave him a royal commemorative needle from 1940. It is a mark of honour that symbolises the resistance to the German occupation during World War II, and I would like to remind him that resistance is never hopeless.

Thomas Rohden and I have received thousands of messages from people in Hong Kong. They tell us how amazing Ted is, and how happy they are that he has reached safety. Some of the messages we received had us in tears. They feel that the rest of the world is looking the other way, and that nobody cares about them. So I think it means a lot to them right now to see that there is someone in the world who actually cares about their lives and their democratic rights.

It feels as if I have been part of an unrealistic, dramatic movie. As if it has not happened in reality. I’m enormously proud of what we’ve done.

I know there are some people who wonder whether it’s okay to lie. But when a life is at stake, and it can be saved by lying to a communist dictatorship, then this is one of the few times when lying is OK.