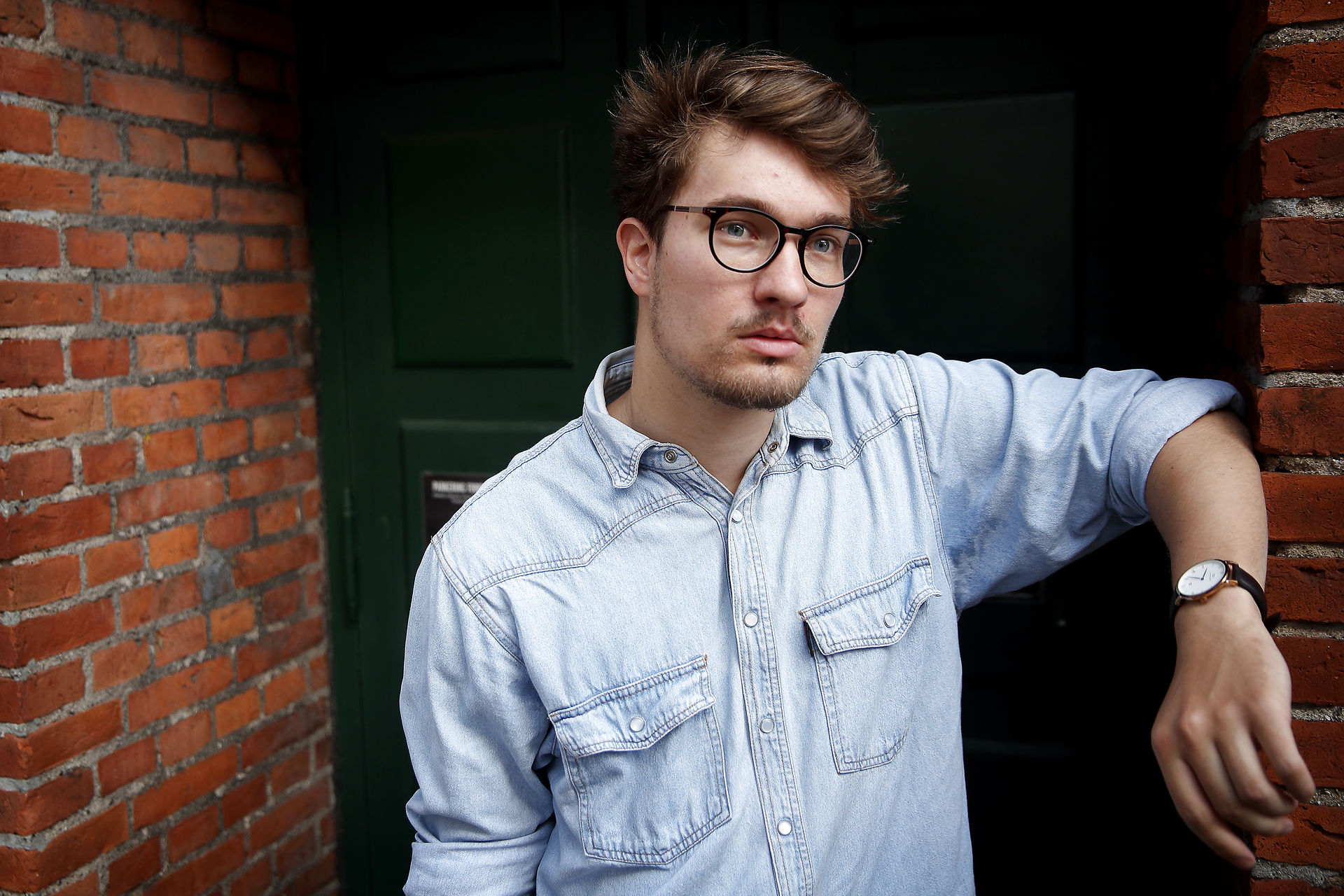 »The debate over graduate unemployment [in Denmark] is one-sided. Because students always end up being given the responsibility for it,« says Johan Hedegaard Jørgensen, chairman of student union DSF.
image: Jens Dresling/Scanpix

Many students don’t get a good student job and risk subsequent unemployment, according to the City of Copenhagen's mayor for employment and integration. But according to the National Union of Danish Students DSF, student jobs are already taking up too much of students’ time.

Almost 8,000 new students have just started at the University of Copenhagen. Here they have to get used to reading academic texts in reading rooms, and writing long, reference-packed assignments.

But Cecilia Lonning-Skovgaard, mayor for employment and integration in the City of Copenhagen municipality, argues that they should, before too long, look up from the books and start thinking about the hard reality after graduation.

In a featured comment in the Danish section of the University Post, she writes that far too many students don’t find a relevant student job. They therefore have a greater risk of becoming an unemployed graduate.

»So, dear students,« she writes. »Find a student job now – it’s like holding a safe pass that will let you steer free of unemployment, the dole, and the job centres, and go directly into the labour market.«

The question is though. Are people really not focussing on student jobs at university? Or are they really too much of a focus for students?

You can find statistics that back up both claims: On the one hand, the graduate unemployment rate is about 20 per cent for newly qualified academics (after six months) in Denmark, and studies from the Confederation of Danish Industry and the Danish Evaluation Institute show that student jobs are one of the most effective ways to prevent unemployment.

The mayor of employment and integration Cecilia Lonning-Skovgaard says that these are good numbers.

But she maintains that more students should seek relevant jobs earlier on in their studies, especially if they have chosen a subject with high graduate unemployment. She mentions study programmes like history, biology, comparative literature and a number of smaller language programmes.

»Students need to, obviously, make money, but if you have been a helper for a disabled person during the first two years of your studies, you may need to start looking for a more academic job if that is what you dream of getting after graduation,« she says.

»This is not to pick on anyone. This is actually just to say that it is one of the best things that you can do for yourself as a student.«

According to Johan Hedegaard Jørgensen, chairman of the National Union of Danish Students, this is exactly what happens in the debate about graduate unemployment: The students are being hectored and harassed — again.

He rejects the claims that the hunt for student jobs is not considered to be important enough among students.

»In fact, student jobs take up so much focus that, in some cases, it is actually harmful. Some groups of students are warned and preached to about facing unemployment after graduation if they do not build up a good CV. This removes focus from what is the core purpose of it all, namely to learn something.«

In our experience, student jobs already take up so much focus that, for some people, it is to the detriment of their academic work.

A study from the trade union Djøf showed that student jobs may give a head start in the hunt for jobs, but that they are also a cause of stress among students. 61 per cent of students in the study replied that they to some, or to a great extent, feel stressed. According to one in three of this group, the cause is too much student job work.

At the same time, 42 per cent of students who have not completed their degree programme in the prescribed study period say that it is due to their student job.

According to a new study from the Danish Association of Masters and PhDs (DM), the proportion of students with stress who indicate that their student jobs are the cause of them falling behind has fallen from 40 to 26 per cent. But this is most likely due to the fact that many of them have worked less during the corona crisis, the authors write.

Johan Hedegaard Jørgensen says that the numbers point to student jobs being too demanding and requiring too much time and too much diligence in an already busy student life.

»The debate over graduate unemployment [in Denmark] is one-sided. The students always end up being given responsibility for it. We are the ones who have to optimise ourselves, we need to get through our study programmes faster, we have to have a student job at all times. It is not a coincidence that students are not flourishing, and this is all a part of this wider picture,« says Johan Hedegaard Jørgensen.

»Nobody wants to be unemployed, and a good student job is fine. But it should not take away from the academic side of things.«

Cecilia Lonning-Skovgaard speaks directly to individual students in her featured comment: ‘Remember to find a good student job’ is the message.

But she also says that universities should make students aware of the value of student jobs, perhaps already at the start of their studies.

Bjarke Oxlund is head of one of the departments that has a high graduate unemployment, namely Anthropology at the University of Copenhagen. When he was hired last year, his dean Mikkel Vedby Rasmussen told Oxlund that he should »make sure that anthropology graduates’ employment rate should be increased significantly«.

Mayor of employment and integration at the City of Copenhagen, Cecilia Lonning-Skovgaard

But the head of department rejects the idea that an increased focus on student jobs is one way to achieve this.

»In our experience student jobs already take up so much focus that for some people it is to the detriment of their academic work,« says Bjarke Oxlund.

»It is a question of how it is often difficult to find the right balance. If you have an employer in an organisation or a ministry that says that you have to be at work for a certain period of time during the day, then we have an unequal situation. Because we do not have this requirement for attendance at university. In this negotiation, your study programme will often be the weaker party.«

Instead, according to Bjarke Oxlund, management at Anthropology tries to create a more resilient connection between student and working life. He encourages students to enter into business collaborations and to use their master’s thesis to open a door on to the labour market.

»In this way, we can succeed in integrating a future working life with an academic interest. This is something otherwise can be experienced as two competing silos. The students deserve that we as a department are better at helping them find the right balance, so you don’t end up working to the detriment of your studies.«

Cecilia Lonning-Skovgaard acknowledges that student jobs can attract too much of people’s attention, especially on study programmes where there are few teaching hours, yet big syllabi to have to cover. Here, some people may underestimate how much time they have to put aside for independent study and meetings in study groups, says Lonning-Skovgaard.

She says however, that most people are able to plan their time sensibly, while employers are often aware that cannot exploit the student assistants’ time, but need to give them time to study, especially during exam periods.

Some groups of students are warned, and preached to, about facing unemployment after graduation if they do not build up a good CV.

»Without me sitting here having to talk up the competitive state and how ‘we now have to get a bunch of combat-ready soldiers’, it’s still also about practicing what it is that you can achieve in a week. It sends a signal to an employer that this is an applicant who can administer their time and multiple assignments.«

With many students having to postpone their studies because of their student jobs, can we not say that sometimes the job can take up too much focus?

»I’m sure it can. It is important to balance things out, and the sweet spot is probably about 10 – 15 hours a week. We’re not going to go above half-time, because three full days at the office are not good for any students.«

When every third Djøf student who feels stressed says that their work is the cause of it, should we not be saying the opposite to students than what you are doing. Namely: ‘Take it easy? Remember to focus on the books.’

»You can just say that, at some point, you have to come out and face the real world. This can cause problems if you are unprepared. It doesn’t do much good for your well-being if you are walking around unemployed,« says Cecilia Lonning-Skovgaard.

»But everything with moderation, of course. Now new students should be allowed to start at university and perhaps find a place to live. My featured comment is just an appeal to not start thinking about your student job on your master’s, because then you will end up taking a semester abroad, and you will be two courses behind with no time for a job. All of a sudden you are in the middle of your master’s thesis. You need to think student job into your plan, if not right from the beginning, then certainly pretty shortly thereafter.«