Students at online matriculation: »OK. This thing might get awkward« 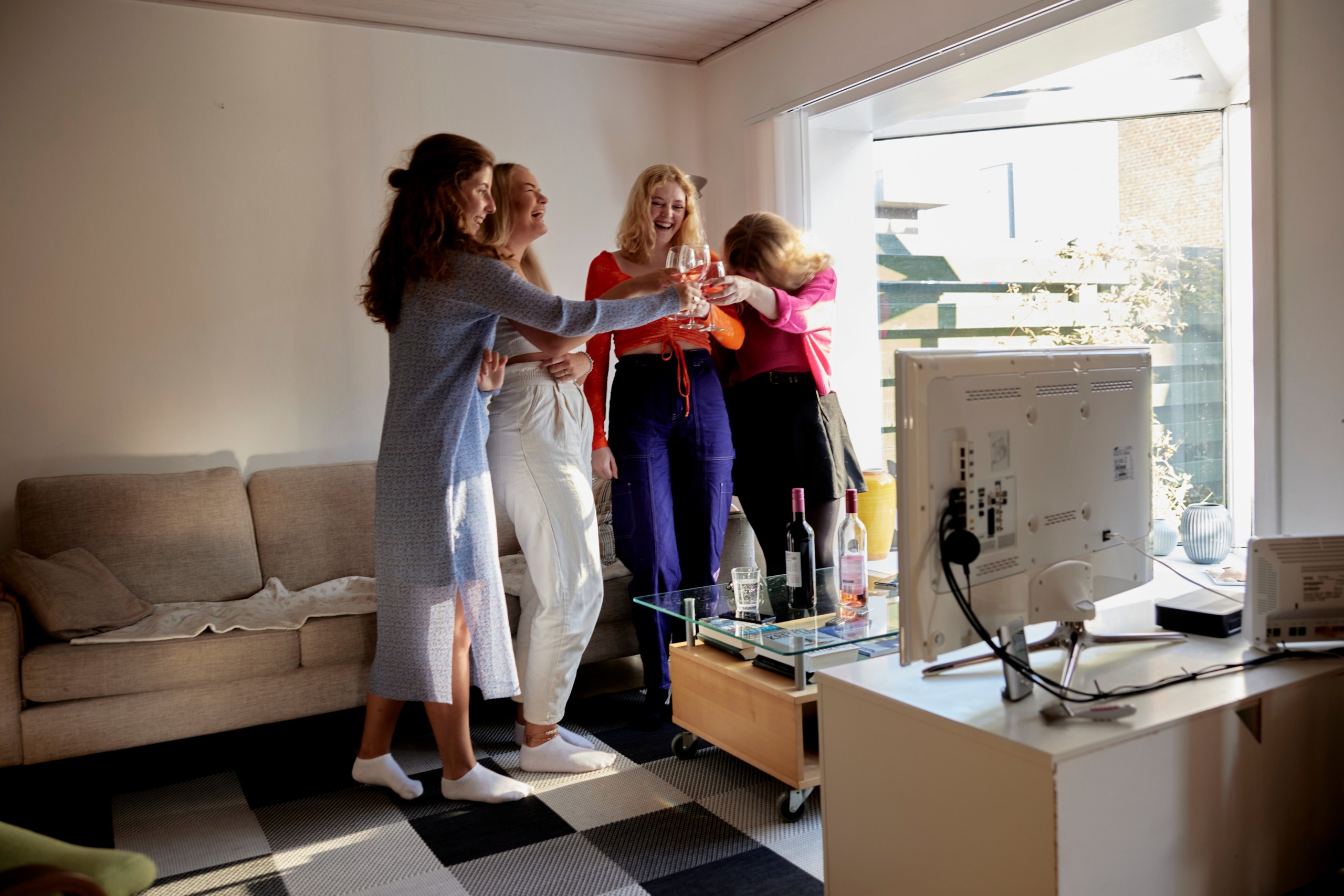 Coronavirus — For the first time ever, new students at the University of Copenhagen were only welcomed digitally - via video. Four students followed the ceremony from their couch out in the suburbs.

Four friends have decided to do the matriculation ceremony together.

Normally, as per University of Copenhagen (UCPH) tradition, they would be standing on Frue Plads bunched with 3,000 other new students. They would see the rector go up on the podium and have his welcoming speech intone through the speakers. One by one they would shuffle up the stone staircase towards the ceremonial hall and greet him with a handshake.

Today they are in front of a TV screen on a couch in the Copenhagen suburb of Rødovre.

Due to the coronavirus, the matriculation has been cancelled as a physical event this year and the University of Copenhagen welcomes new students online by way of a one-hour live stream.

I hope that we will not be the forgotten year cohort.

The four friends know each other from their secondary school Rødovre Gymnasium and have dressed up festively and have topped up their wine glasses with rosé. Even though the matriculation – the ritual welcoming of new UCPH students has existed for more than five hundred years – does not seem to be as solemn as usual, the students feel the thrill.

»I can’t wait for you to be a doctor Damm,« says Ella Evers Tusvik, to Mathilde Damm Andersen, a budding medical student.

She looks over at Astrid Jetsmark Jønsson, who is also going to study medicine, slated to start this winter.

Mathilde Damm Andersen starts fiddling with her computer, as time approaches 17.00 and the live stream pops up on the flat screen in front of them.

Then the transmission starts. Kind of. In the picture, you can only see the cobblestones on Frue Plads for a long time before the cameraman finally realises that it is sending live. Then he rushes it over to the evening’s host, comedian Mikkel Rask, who sits on the stairs of the Ceremonial Hall and has to be absolutely certain that the show is on.

»Okay. Are we ready? Welcome to the matriculation at the University of Copenhagen 2020,« he says in English.

»This year will be a little bit different. What an audience we have today,« he continues, while the camera pans out over an almost deserted Frue Plads.

He follows it up with a series of one-liners that force a smile from the four girls in Rødovre. 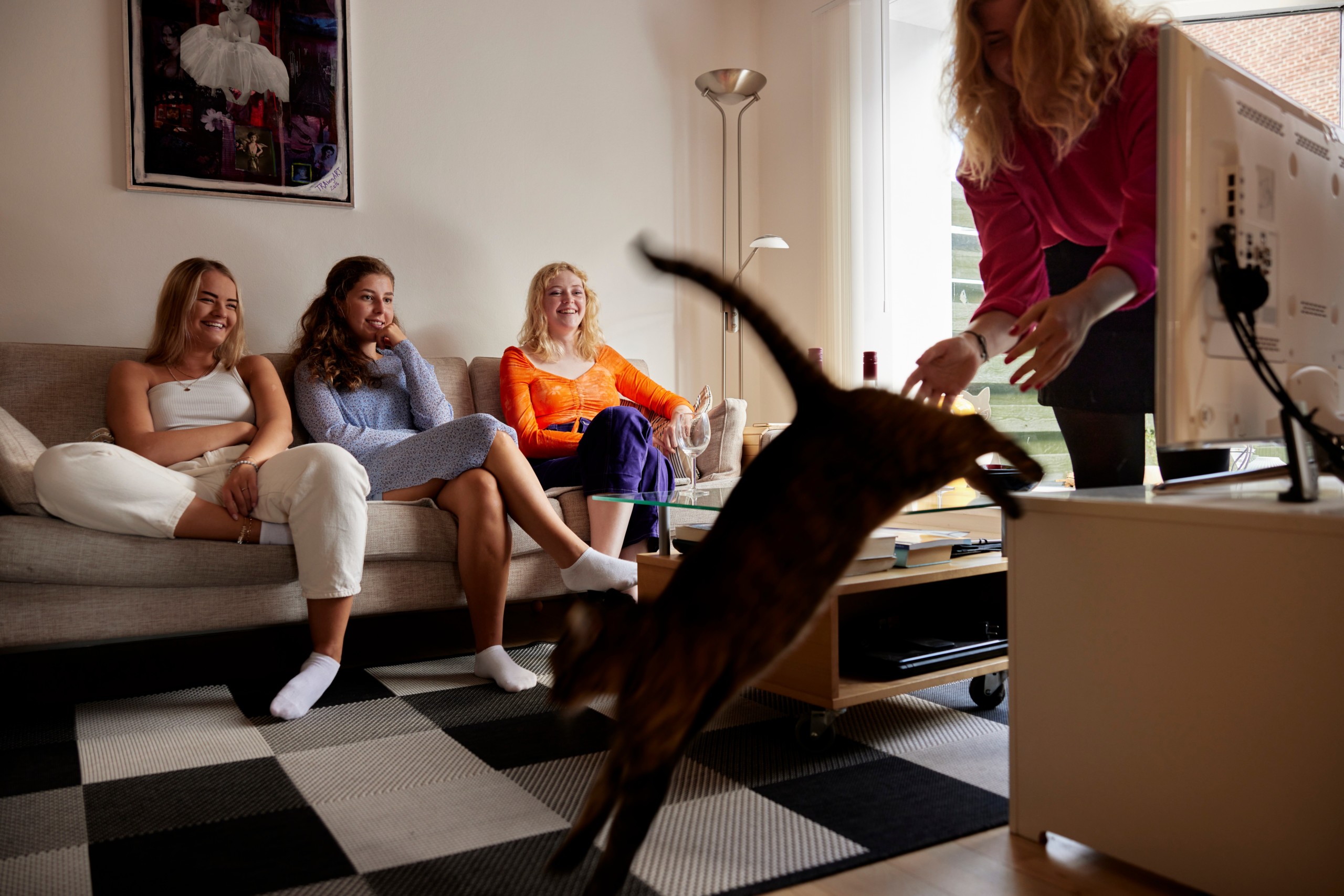 »OK. This thing might get awkward,« says Astrid Jetsmark Jønsson.

Shortly after, she and her friends liven up a bit when Mikkel Rask mentions the evening’s main event, a concert with the Danish singer Jada.

»Yas!« it resounds from the couch while the musician beckons from the ceremonial hall.

The clown in the clever location

Two hours before the new students had sat down on the couch, Mikkel Rask was about to do a dress rehearsal in the ceremonial hall. This is the first time he will be hosting an online event, he says – and this is not a simple challenge:

»Normally, there is a rhythm in the stand-up, where you speak, and the audience responds. They are usually an integral part of the conversation, but today I will be a bit more like a host,« says Mikkel Rask.

»I am the clown figure that turns up in a very clever location. I would love to perform for the new students live.«

In the midst of the tangle of cables, cameras and technicians, Rector Henrik C. Wegener emerges with a broad smile on his face.

»It is a different format than what we are used to,« he says.

»There are a lot of things that have to work together when this goes live, and we’ve tried to prepare as much as we could. We have a host, a live orchestra, and hopefully also a live rector.«

A couple of hours later, the four friends in Rødovre see the rector walk up to the rostrum and put on his robe before moving back down again. He stands in front of a screen full of students who are joining him via webcam.

Meanwhile, Mathilde Damm Andersen’s cat jumps onto the TV table in a desperate plea for attention.

»Maybe you are turning up at this university with mixed feelings,« the rector says in English.

»Nowadays, we are often corona-connected and hooked up with cables and cameras. Just like now. This is a bit strange, even for people in your generation who are digital right through to the bone – unlike an old boomer like myself.«

But this doesn’t mean that they don’t care.

No, no, no, this is a complete anti-climax.

»It bugs me that we are missing out on so much stuff. You hear from your family and friends that it is really important to get off to a start to your studies,« says Mathilde Damm Andersen.

»It is primarily the social thing that I worry about. As it is important to be physically together. It seems like they have made compromises with this part of things,« says Sofie Andersen, who is a new pharmaceutics student.

»It’s a shame that we’re going to be missing the Friday bars here at first. This is our opportunity to talk to the older year cohorts,« adds Astrid Jestmark Jønsson.

»I hope that we will not be the forgotten year. 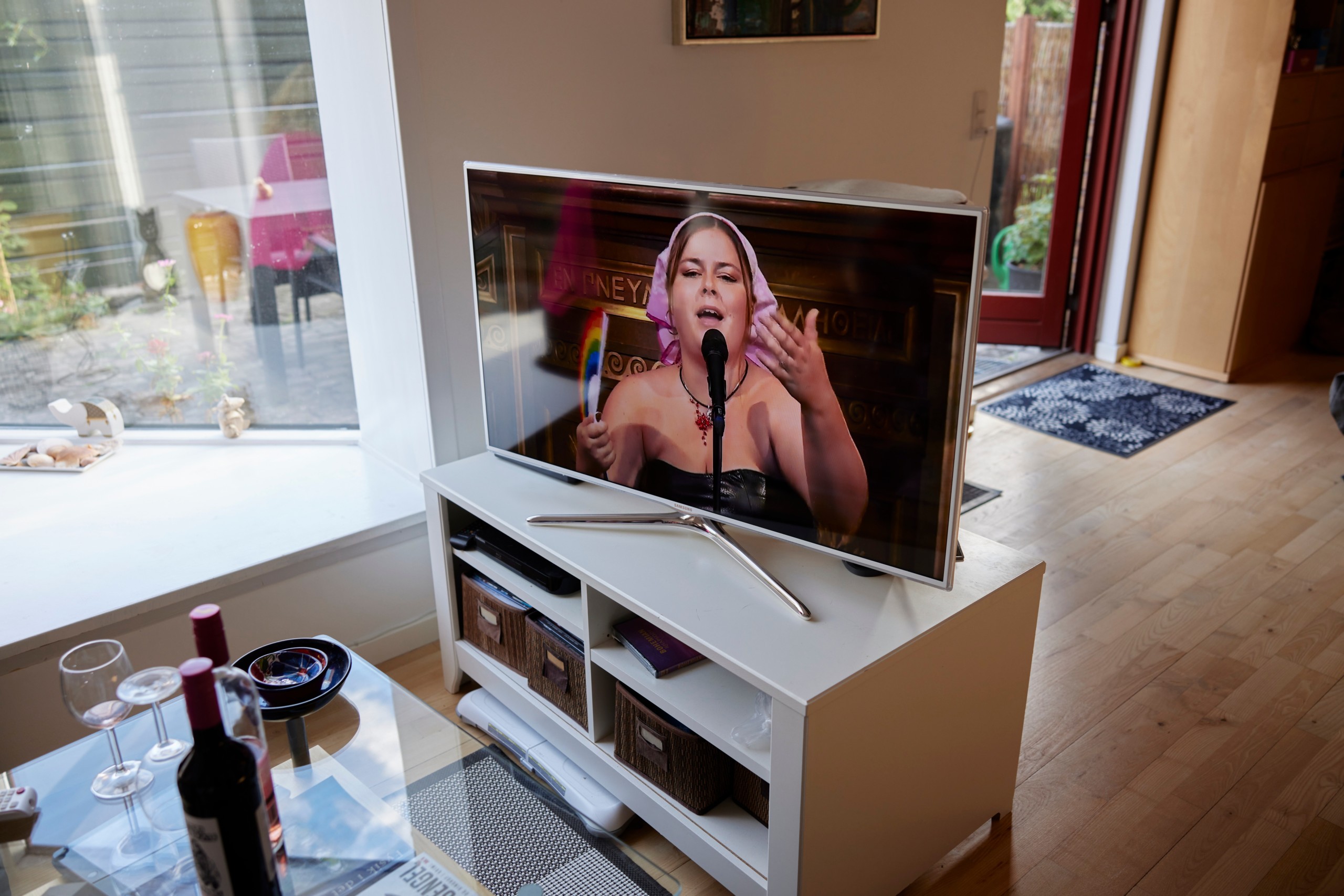 A »Yas!« erupts from the couch as Jada pops up on the screen.
image: Jonas Pryner Andersen

Jada now pops up on the flat screen, and the students are cheering for the first time during the show. They should have seen her on the huge Orange stage at the Roskilde Festival this summer, they say. This was cancelled too.

»This was, of course, 55 per cent of the reason why we decided to see this show together,« admits Ella Evers Tusvik, who is going to study mathematics.

»This is probably also why they have chosen to place her at the end. Otherwise, you would probably have turned it off,« says Sofie Andersen.

Jada does a few numbers flanked by a pianist and some choir singers, who, like the main singer, wave little fans as they sing.

The four students are thrilled with the online concert, talk about the performance that Jada gave at the Roskilde Festival in 2019, and about her voice which reaches out to every corner of the empty ceremonial hall.

When the last notes fade into the Hall and silence yet again takes over the space, one of them asks:

»Are we supposed to clap?«

Shortly after this, a confetti cannon is fired, and colourful paper strips descend down from the ceiling, but the camera is again messing around the floor, and does not quite capture the festive part of the situation.

»No, no, no, a total anti-climax,« laughs Astrid Jetsmark Jønsson

»A bit New Years Eve’y,« says Mathilde Damm Andersen, with a half-filled glass of rosé in her hand. »But it’s great that they try to do so much for it.«

»They could have had a few more people. 100 or something,« says Ella Evers Tusvik.

Sofie Andersen looks around to her friends.

»I’m happy that I saw this with some other people. It would have been really boring to see this on my own.«