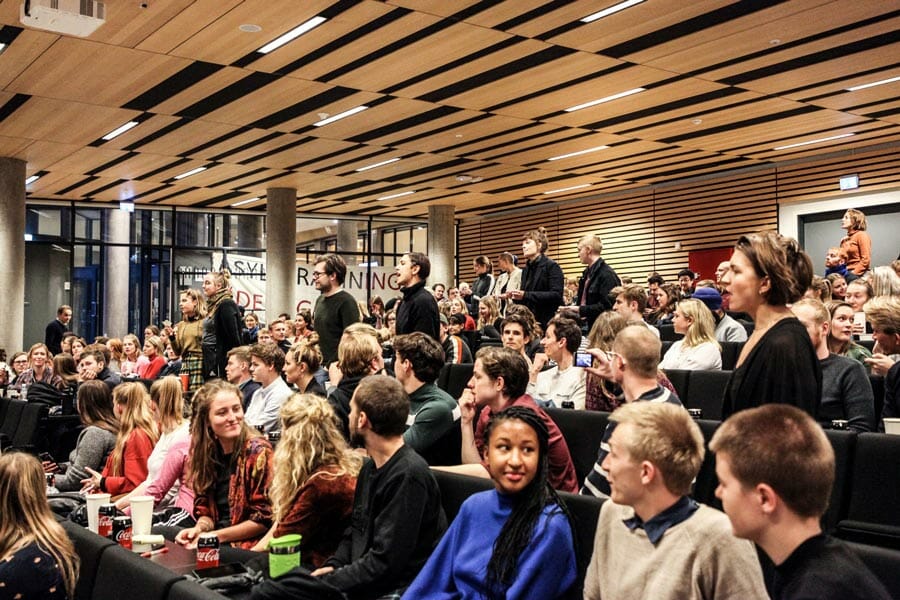 The students who interrupted the Inger Støjberg event submitted a featured comment from a fictional spokesperson. The University Post has now deleted the comment and the group apologises.

The group of students at the University of Copenhagen (UCPH) that demonstrated 20th February against the Danish Minister Inger Støjberg’s asylum policy on the CSS campus have submitted a featured comment from a fabricated spokesperson.

The University Post has now deleted the submission as this media does not publish anonymous comments.

The opinion piece, that was sent by e-mail to the newsroom from a person who the University Post knows was involved in the action against Inger Støjberg, Minister for Immigration, Integration and Housing, was claimed to be authored by to the group’s spokesman Emma Guldmand.

But the group has now admitted that this is not a real person.

Probably the name of the anarchist

It was a comment from a reader, which made the newsroom aware that Emma Guldmand might not be a real name.

When the University Post tried to verify the identity of Emma Guldmand, a representative of the group of demonstrators initially sent a fake e-mail address, claiming to be Emma Guldmand’s.

No-one with this name is registered at UCPH – and a Google search does not lead to much more than a Facebook profile of doubtful authenticity which was last updated 6 September 2016.

You can, however, read a lot about the Russian-American anarchist Emma Goldman (1869-1940) on the internet.

Cristina Eriksson, who is studying anthropology at UCPH and who took part in the Støjberg protest, regrets that members of the group used a fictional identity.

“It was not our intention to put the University Post into a difficult spot,” she says.

Cristina Eriksson says that the group wanted to speak with a collective voice, and that they have no spokesperson.

“The focus should not be on us as persons, but on Støjberg’s politics, so we used a fictional student name, so we could speak as a collective. For this, I would like to apologize for on behalf of the group,” she says.

But should you not stand forward under your own name as a person if you want to take part in the public debate?

“We have stood up with our faces and with our persons in our action,” says Cristina Eriksson, who does not wish to answer whether the group wishes to remain anonymous due to fears of retaliation.

Is it not idiotic to stand up using the name of a fake student?

“We maintain the use of a collective identity, and we do not see this as problematic, but we are sorry that we have put the University Post in a bad spot.”

This final quotation was altered on request from Cristina Eriksson on Friday 23rd February at 11:07.