Students in bed with their phones 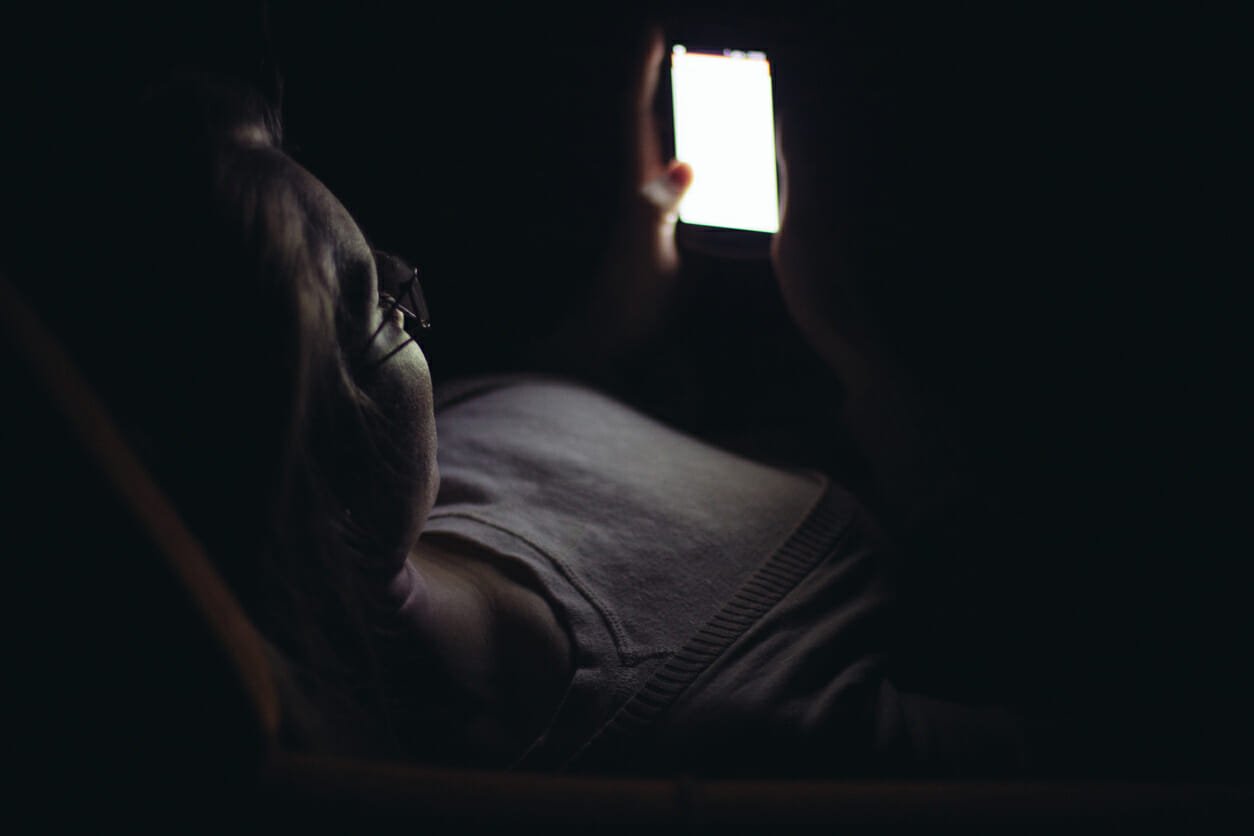 Hormone disruption - The blue light from a mobile phone inhibits the secretion of the sleep hormone melatonin, and nighttime text messages can act as a mental stimulant, potentially delaying the sleep phase.
image: iStock

Fomo — Young people are big users of their mobile phones at night. A research project at the University of Copenhagen is to find out how the Danes' mobile habits at night are affecting their health.

The trusty sidekick that most of us own and love, sneaks down under the covers when we have turned off the lights.

“We were surprised that the numbers were so high. It seems that the dependence that many people have on their mobile phones by day, continues at night,” says Nete Dissing, research coordinator and postdoc at the Department of Public Health, University of Copenhagen (UCPH).

Almost a fifth of participants in the study used their phone in the middle of the night. For young people between the ages of 16 and 25 it was a third. And among young students, 41 per cent send text messages, check social media, or receive calls on their mobile phones either every night, almost every night, or a few times a week, through the sleeping period.

“A lot of people use the mobile phone at night to see what time it is. But many people also use it for social contact with others, and it may set mental processes in motion that affect sleep,” says Nete Dissing.

It seems the dependence that many people have on their mobile phones by day, continues at night

The researchers followed a group of about 800 students at the Technical University of Denmark (DTU) over a period of four weeks. This has given them a unique opportunity to track nocturnal mobile behaviour through the period of sleep.

“Most of the research on sleep and mobile phones is about how we use our mobiles in the evening before we fall asleep. But now for the first time, we can get an insight into Danes’ mobile habits, after we have laid down to rest,” says Nete Dissing.

Besides following the 800 students’ nightly mobile habits, the researchers have, in collaboration with P3 on national broadcaster Danmarks Radio, conducted a questionnaire with 24,897 Danes participating.

“The aim of the project is to learn more about how the use of the mobile phone affects our sleep and health. Most of the Danish populace use smartphones in one way or another. It is therefore important to clarify the physical and psychological consequences,” says Nete Dissing.

Of those who use the phone at night, 66 per cent state that they often have poor quality sleep. But it is still too early to say anything certain about the cause:

“There is a significant increase in the number of Danes who sleep poorly today compared to Danes who slept poorly eight years ago. It may be due to increasing mobile usage, but it can also be that you use your mobile phone at night because you cannot fall asleep. This is something that we are studying,” says Nete Dissing.

It is particularly among young people that there has been an increase in the number of those struggling with sleep.

The results of the questionnaire show that:

The clock, the alarm and the social media are the most important functions when we pick up our mobile phones at night.

Participants who check their phones at night often sleep poorly and uneasily.

Participants who state that they are woken up by their partner’s use of digital devices, also check their mobile phone at night.

The latest figures from the Danish national health profile show that 39 per cent of 16-24 year old men were bothered by sleeping disturbances in 2017. In 2010, the number was 30,6 per cent.

“The figures are nationally representative and indicate a significant public health problem and a clear deterioration in the quality of Danes’ sleep. This is in the same period where smartphones became widespread. So it is reasonable to suppose that there is a connection,” says Nete Dissing.

Previous reserach has shown that the blue light from the phone inhibits the secretion of the sleep hormone melatonin, and that nighttime text messages can act as a mental stimulant, potentially delaying the sleep phase. The researchers behind the project are spending the next two years finding out the extent to which this affects our sleep, health and fertility.

The research project is expected to be completed by 2020.