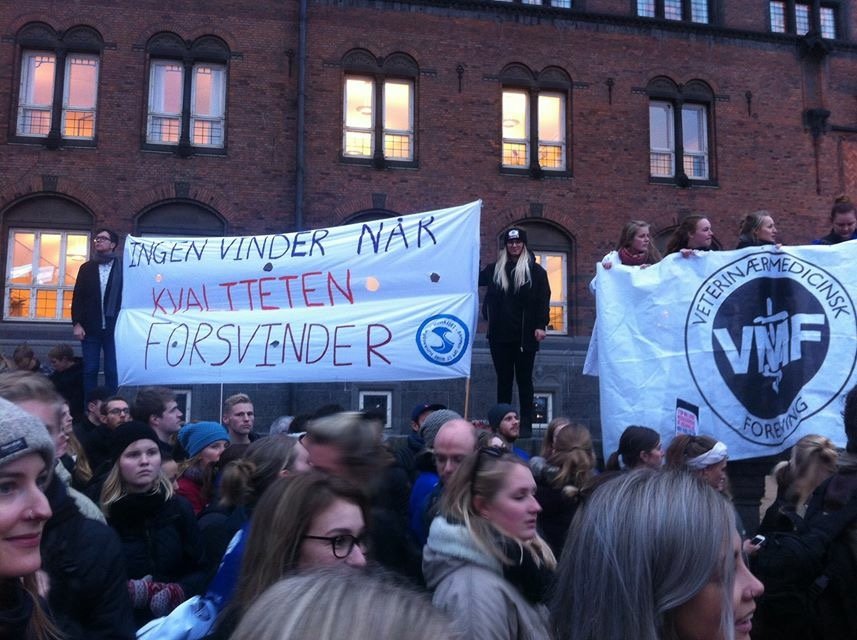 Students attending a protest in 2015 after the plan for financial cuts at the University of Copenhagen was announced.
image: Augusta Wilken

In the fortnight since SAF, the Student Activists Association – De Studerendes Aktivistforening, was born, its membership has ballooned to around 900 people. Members from the University of Copenhagen, Roskilde University Centre, and increasingly other educational institutions are getting involved.

Now, SAF plans a massive sit-in at the KUA campus next Thursday, 3. March, and they say it will go on for 24 hours. The Facebook event promises academic lectures, political speeches, workshops, beer, fun, music and freely-shared knowledge for all. 700 people have already signed up as participating or interested.

University of Copenhagen student and event organiser Vincent Ringo says: ”The idea is to collect the voices of all the students, to channel our anger at the cuts productively.” The latest of several protests, he wants to harness ”the force of many different actions.”

Voice of the average student

The sit-in aims to include all affected parties: in its own words, ”from pre-schoolers to professors.” It will draw on members’ resources to celebrate freedom of expression, freedom of thought, and the very things that students feel education enables, but that are now under threat due to the governmental savings plan.

SAF is also holding a planning meeting in the run-up to the 24-hour sit-in Thursday. Details are on the event page.

”The idea of SAF is to be the voice of the average student. A student that did not know where to go earlier. People want it and need it in the study environment,” explains Ringo. ”We’re open for everybody. It is a democratic, collective thing; everybody has a voice in this association.”