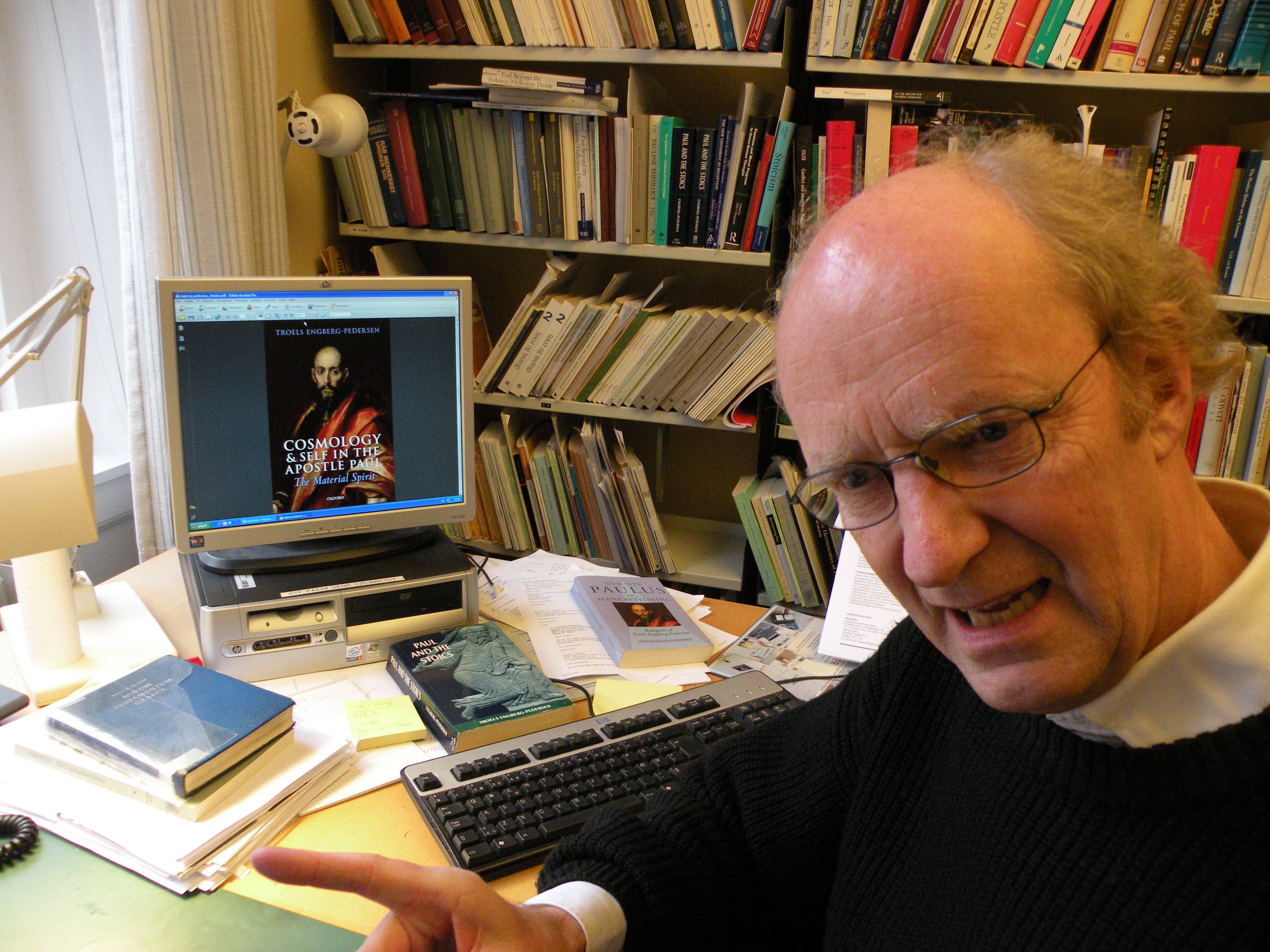 EXEGESIS - In front of a screen shot of his upcoming book. The picture of Paul on the front cover is by El Greco, Troels explains
image: Mike Young

From our modern perspective, Saint Paul had some strange ideas

Not counting Jesus himself, the Apostle Paul was probably the single most influential thinker in Christianity.

Just to give an example, centuries of philosophers have grappled with Paul’s formulation of human weakness and the conflict of duty and inclination: »The things that I like I don’t do, but the things that I hate – those I do«.

In one of the most memorable passages in the New Testament, he counts faith, hope and love to the Christian virtues, ‘these three, but the greatest of these is love.’

Yet the more you get to know him, the more enigmatic he and his view of the world becomes. Indebted to contemporary Greek philosophical schools like the Stoics, Paul had his own conception of God, the world, and ethics: A conception that is at odds with later Christian tradition and a modern scientific worldview.

Troels Engberg-Pedersen, a classicist and theologian at the University of Copenhagen, has spent the last ten years of his life working out all the things that Paul presupposes –his cosmology.

»Take for example his understanding of ‘spirit’ which is a bad translation of the Greek word ‘pneuma’. We normally take the spirit to mean something immaterial, something floating around in the ether,« he says.

But this ethereal conception of the spirit is a result of a later influence of the philosophical school of Platonism around 200 AD, he explains.

»For Paul, ‘pneuma’ was a material entity, a sort of energy. Understanding the spirit in material terms, helps us to see that he is talking about the human body,” Troels Engberg-Pedersen explains.

Likewise, later Christian tradition will conceive of Paul’s phrase to ‘be in Christ’ as a kind of metaphor.

»But my suggestion is that we should read him literally. When he says that Christians are ‘in Christ’, he conceived of the risen Christ as actually entering the bodies of those who belonged to Christ,« he says.

Getting to grips with what Paul means when he uses concepts like ‘pneuma’ and ‘being in Christ’, we not only understand Paul better, but understand the development of Christianity and even the Stoics better, he adds.
This is some strange stuff.

And Troels Engberg-Pedersen admits that he does not personally go along with it. After all, the worldview of the Apostle Paul is so radically different from a modern understanding of the world, that it is likely we are unable to believe in it.

»I don’t believe for a minute his understanding of the material spirit. But I am fascinated by his attempt to bring together his theology, cosmology and his articulation of a preferred way of living,« he explains.

Getting the inside angle

As in all theology, human and social sciences, the question why we should be interested, is almost as important as the thought itself. For Troels Engberg-Pedersen it is the strangeness, the otherness of Paul that makes him relevant.

»It is extremely important to move away from our own culture, and to attempt to achieve what the anthropologists call the emic, the inside understanding. In history we can go back and find someone who at the same time has had an influence upon our lives and thought, but who at the same time, like Paul, is very strange«.

So should we consider him an ancient philosopher? Should he be on the philosophical canon with the likes of Plato or Aristotle?

»We can try to read Paul as a philosopher, yes. He argues as a philosopher, had a philosophical mind, and attempts to relate concepts to one another. But we also should remember that he saw himself as a missionary, he wanted to proclaim the Christ event, and to make Christians accept the return of Christ. Within that overall conception, he uses philosophical reasoning«.