The dean who was a dropout 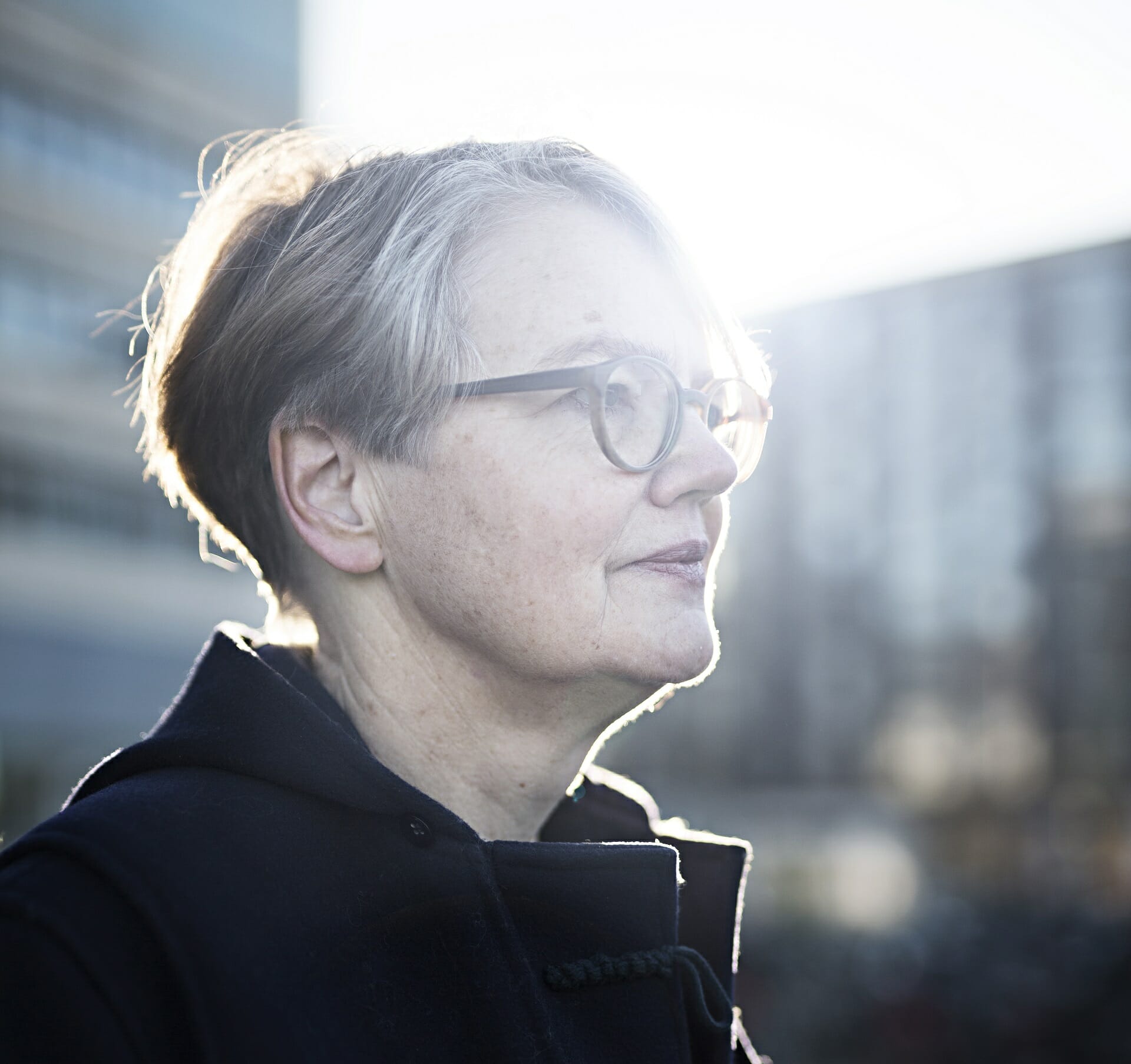 Portrait — Kirsten Busch Nielsen found her way to theology after a 'productive study crisis' and became the faculty’s first female dean. She wishes the next generation, like hers, had the same freedom to try a course of study before obligating themselves. Because you can’t align your expectations perfectly.

Alarge orange painting interspersed with light, geometrical, slashes catches your eye in the refurbished dean’s office in the travertine building on South Campus. Kirsten Busch Nielsen likes the work because it is powerful, soothing and simple. But it is not deep, she says.

There is, in contrast, depth to the room’s other painting, a classic Danish Golden Age portrait of a stately man with an alert gaze.

“This is H.N. Clausen, one of my predecessors as professor in dogmatics (1822-1874, ed.). I look up to him once in a while: ‘So, Clausen, what do we think about the study progress reform?’,” says Kirsten with a dialect from the west-Jutland, Ribe region.

There is no doubt that the student in classical languages from the Ribe Katedralskole school of 1980 has a hotline to the catalogue of history. She is a professor in dogmatics, which deals with Christian teachings and ideas, and she is interested in how this content and view of human nature can be formulated in a meaningful way today.

The prestigious faculty which shrank

Alot has happened since the Faculty of Theology was set up with the University of Copenhagen in 1479. The faculty was the most prestigious and, up into the 1700s, the largest. Today, it is the university’s smallest. Since 2013, Kirsten has headed the faculty from which she graduated in 1988.

“I usually say that I’m proud to be at a university that is proud to have a faculty of theology,” says the dean, who is used to having to defend the faculty’s independence in the face of the last 550 years’ secularism.

“I think it is very decisive that theology has its own framework and its own budget, and I find it absolutely crucial that theology is a subject with a comprehensive exchange with other sciences, which we have.”
Kirsten smiles when the University Post says that we weren’t here to talk about her relation to God:

“I’m a diehard supporter of public communication about anything and everything, but you have to choose your debate subjects with care. For theology has a delicate balancin act to do, in that religion is involved,” she says and adds:

“Not everyone is aware that there is a strong critique of religion in theology. It needs to know its scientific premises in the same way as any other subject, and you should also be aware that criticising religion also belong to theology. In this way, theology is not for the faint of heart.”

The Office of the Dean is not for the faint of heart. This, Kirsten realised herself when the Danish government slashed the University’s budget in 2016.

“The Faculty had to cut back on staff, and the process was my responsibility. This is a task that I would have preferred to have avoided. The faculty’s academic environment is at a high level and has a strong identity. But severe cuts are ugly, and they are the cause of despondency. So it was a part of my job to point to the strength of our academics, and send the signal that we emerged with our initiative intact.”

Kirsten does not believe that you need to look for a long time at her social profile to guess that she is the oldest among five siblings. We are talking about the role as manager:

“There are lots of considerations, a manager has to take on alone, and you have to be able to stay alone with these considerations. I feel uncomfortable with this. But in daily management, where it is all about the build-up of academic environments and study programmes, then collaboration is best.”

And here it is an advantage that the Faculty of Theology is a small unit, says the dean:

“Students, employees and managers are close to each other, we can make decisions quickly, and the proximity means that strategic considerations are strongly anchored in our working lives.”

One year ago, the theologians and the lawyers moved from their old haunts in the Inner City from where the auditorium chairs were uncomfortable, where the brass handles were worn out, and where the walls could talk. How did it go?

“This building can do something else than the former department store in Købmagergade street. There are no nooks and crannies, but the students here become a part of the entire university. South Campus has also become more of a university after Law and Theology moved in,” says Kirsten, who reckons that both students and employees, despite initial scepticism, have accepted the new building. 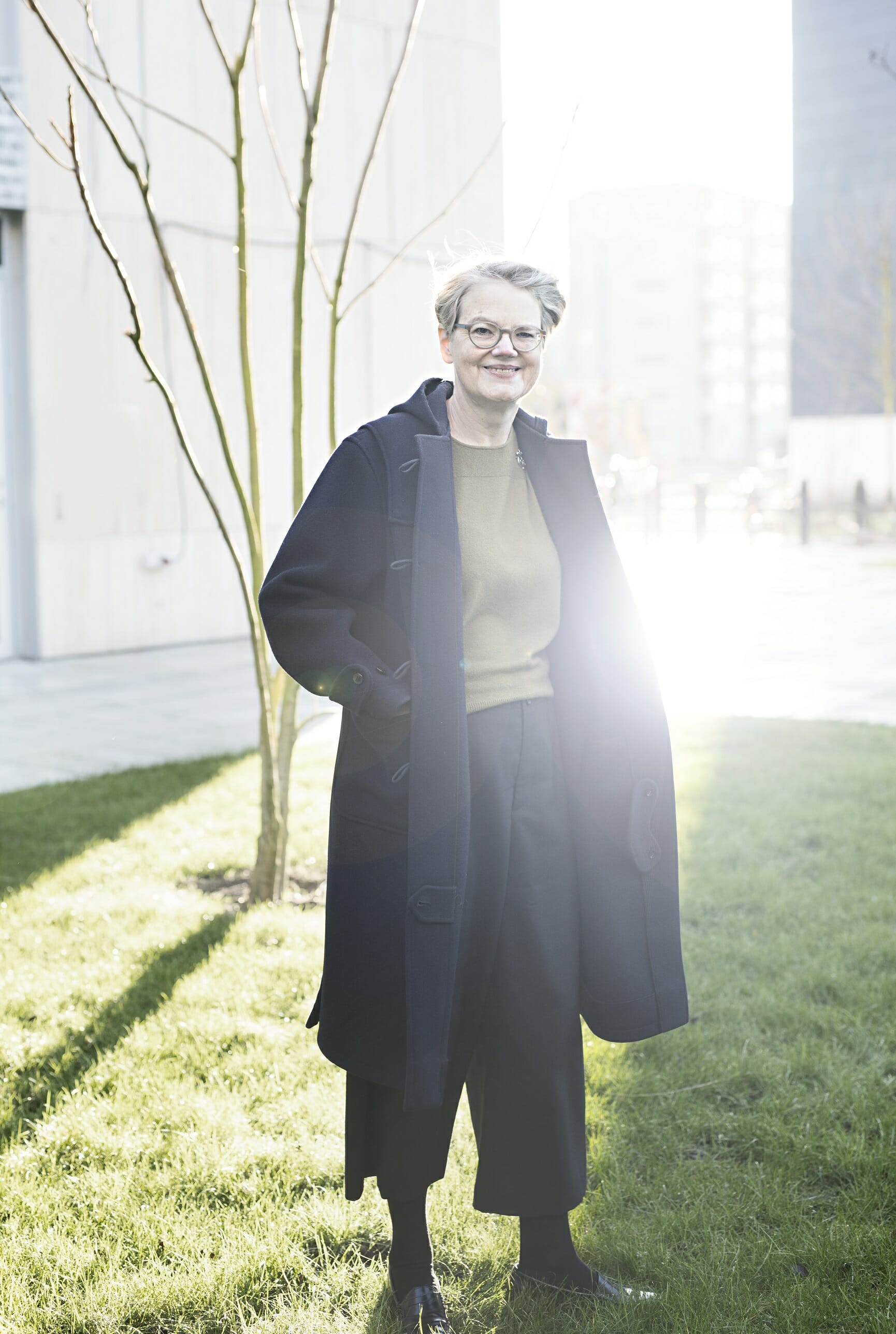 "The artwork Gabriel is a good commentary on this building, which radiates a gentle and friendly efficiency, as modern buildings do."
image: Lizette Kabré

She appreciates stage 3 in the development of South Campus. From her office, she has the prospect of the courtyard, which is at the same time a work of art – Gabriel by Ingvar Cronhammar – which comprises a sculpture, a slab of granite, and a group of trees:

“The artwork Gabriel is a good commentary on this building, which radiates a gentle and friendly efficiency, as modern buildings do. Out there, Gabriel stands with his asymmetry and weight and something else – this is a good contradiction,” says Kirsten. Judging from the grunt, she could well do without the 11 large no-smoking signs in the area. They are not part of the work of art.

Three languages, tradition and the present

The student body at Theology is known to be diverse, now also international, and it scores high points in the annual satisfaction surveys. Who are they?

“The students of theology chooses the main subject because they are generally curious about what humans are, and what society is. For historical reasons, Christianity belongs to this. Of course there are a group of students who have a clear ambition to become priests. And the majority of students do actually become priests, but many of them get attracted to the office of the priesthood during the course of their studies.”

It is very important to the dean, that the faculty can accommodate a broad composition of the student group:

“The global top layer of our students are very, very talented. We make high demands of them – At theology you study for example, three ancient languages as a basis for working with the material, and if you can do this, and at the same time address both the themes and the big questions of today, then you are very well educated. Of course there is also a group of students who find it more difficult, but which are highly motivated and manage the study programme anyway. And they end up being excellent priests.”

The faculties are increasingly assessed in terms of their graduates job chances. Three of the study programmes in Theology have had student places cut, and Kirsten finds the Danish government’s resizing model paradoxical, because it looks backwards at old unemployment statistics.

None (except perhaps Kirsten) know whether H.N. Clausen in the golden frame disapproves or sympathises with the dean, but she did not choose the right path first:

“Personally, I am an example of something which today is considered the worst: A dropout. As a student on the classical languages line in secondary school, I was keen to continue along this path and so I started university on the classical philology programme. I sat over there in the old KUA building and did my minor subject in Ancient Greek,” says Kirsten and gestures towards the Cronhammar work.

In this way, theology is not for the faint of heart.

After two years, Kirsten switched study programme. It was not because she ever thought she would become a priest, but the course had an intrinsic purpose, and this attracted her.

“You need to try out a course of study before you find out what you want to do, and I don’t believe that we can one hundred per cent use guidance and student counselling or align our expectations in a way that this works out. We follow the provisions of the study progress reform, but the question is whether society will end up paying a price, as there needs to be space for the good wrong choices.”

Even though Kirsten regrets that students today are given less space for ‘productive study programme-related crises’ as she calls it, it is no good worrying about it:

“This may sound happy-go-lucky. This does not mean that I don’t look see worrying developments taking place in society – also in university policies – but it is better not to be indignant. Worrying can paralyse you. Wringing our hands – that is the worst thing to do.”

Kirsten Busch Nielsen became the first female dean at Theology. But she does not overplay her girl power – the time was ripe, she says:

“I never thought I had to fight extra hard because I’m a female theologian. And it has not, in this way, been interesting to become the first female professor of dogmatics or the first female dean of Theology.

This was the way things were going, and it could fortunately not turn out differently.”
It sounds like the description of Malene Landgreen’s orange painting on the dean’s wall: powerful, calm and simple.