by: Henrik C. Wegener, Bente Merete Stallknecht and David Dreyer Lassen
Rektor and prorectors at the University of Copenhagen Comment by rector and prorectors — Faculties will get guidance on inevitable reductions of student places by 14 October.

Together with our students and the academic environments, we have warned against the government’s regionalisation plan from the front row of several TV studios. It is a breach of the idea behind the modern univerCITY where knowledge grows according to a principle of proximity between researchers, students and academic disciplines that enrich one another.

Nevertheless, it is a political reality. A large majority in the Danish Parliament are behind the plan. We must make the best of a set task: Relocate or cut student places.

In some places, it could make sense to relocate, for example to Køge where a medical programme can be close to the new super hospital – and where UCPH is already present. However, in most other places, relocating does not make sense – neither academically nor financially.

This leaves us with one move only: Reducing the number of student places. According to the political agreement, the universities must take into account the needs of public sector employers and businesses, programmes in particularly high demand and employment. But the agreement also says that Denmark must maintain a broad range of programmes, including small programmes and languages.

On this basis, the faculties will be given a framework for the reduction of student places no later than on 14 October. The framework will be determined in accordance with unemployment and the demand for a degree programme as well as considerations for how the University’s programmes can also address general societal needs. As unemployment is a main criterion, faculties with high graduate unemployment will have to cut places by more than the political demand for 10 percent across the University. Other faculties will reduce by less than 10 percent. Graduate unemployment at some of the programmes at the Faculties of Humanities, Science and Theology, for example, are significantly higher than at law and medicine.

However, the faculties may also choose to include other criteria that reflect the broader considerations in the political agreement, such as study environment, small programmes and languages, research environment, financial sustainability and educational level.

We must maintain a long-term view in our strategical education efforts. The world is changing rapidly and the University must be at the forefront. At the same time, pure quality of education – in its own right – is always a sound investment because solid academic thinking is a method that can be used to retrain graduates for all sorts of job functions.

However, it also seems obvious to have as a goal that students at UCPH can use their education for the kind of job they have been trained for. We owe this not only to society, but especially to the students. We trust that those faculties where unemployment is a particular concern will now tackle this major task. Dialogue and analyses will be needed in order to reach well-founded decisions that can create more sustainable degree programmes for the benefit of students and society as a whole.

When the faculties have reported back, the Board will discuss and adopt the University’s overall plan in December. The reduction of student places will be phased in up towards 2030. This may seem like a long time. But the Ministry expects a linear trend. It’s not going to be easy. But we can also use a precarious situation to rethink the University’s degree programmes so that students do not have to worry about whether their education is an entry card to an appropriate job. 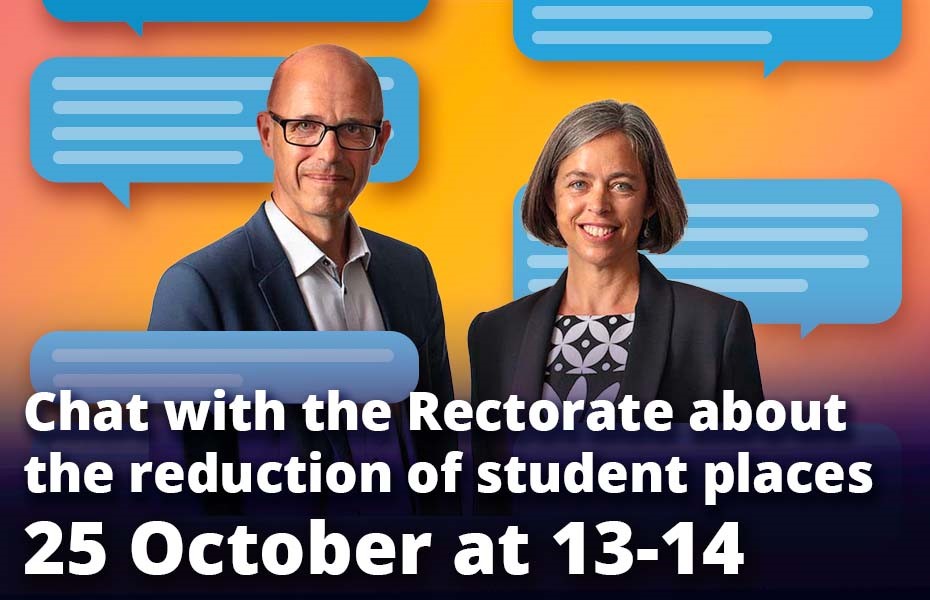 On Monday 25 October at 13:00, the Rector and Prorector for Education will be ready on KUnet to answer questions from students and staff about regionalisation and reduction of student places. You can already ask your question now.