The hunt for the golden banjo 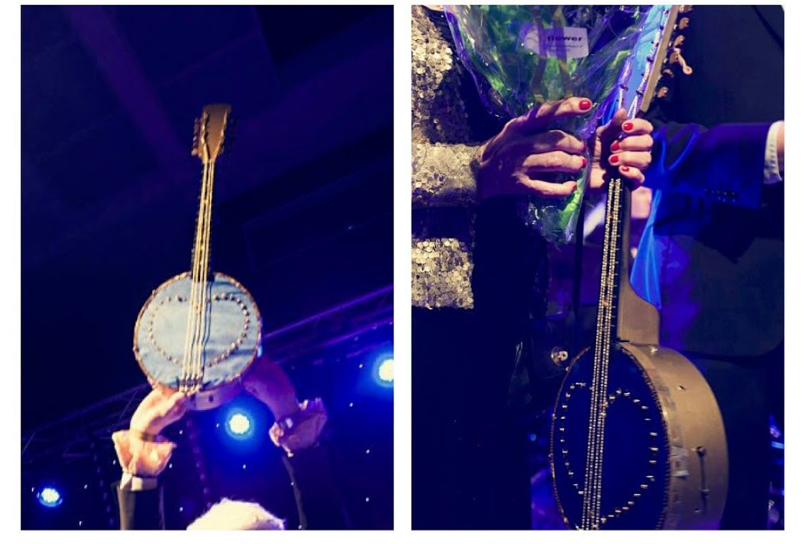 Wanted — A golden banjo belonging to the Department of Musicology has been missing since Friday 13th April. The banjo was last seen in the Roland Bar in connection with a sport science student tour-de-friday-bars event.

In the musicology Friday bar, the Roland Bar, there is an empty case lined with velvet. The case contained one of the study programme’s most treasured mascots – a gold-plated banjo, which has been a part of the department’s history for more than 25 years.

“If I recall correctly, it was Friday the 13th April,” the young man with round glasses explains. At his feet is a black instrument case. Sebastian Clausen is a part of the chairmanship of the Roland Bar, and he was present on that fateful Friday when the banjo disappeared.

When the day’s teaching was over, the chairmanship had taken their familiar places in one of the bar’s sofas, ready for board games and a cold beer. The bar was sparsely populated, and with the lounge jazz coming out of the speakers, it looked to be a quiet Friday.

Roland Bar writes on Facebook that the 25-year-old golden banjo, which for many years has been a part of MiGP, the musicology song competition, is missing.

The banjo was last seen at the musicology Friday bar, Roland Bar, on South Campus on 13th April at around 20:30.

The banjo is described as slim, but it is difficult to determine whether it is a tenor, ukulele, or plectrum banjo. However, photo evidence suggests that the banjo is four-stringed.

The chairmanship encourages people to contact the Roland Bar on rolandbar@live.dk, if you have any information about the banjo.

Suddenly the sound of jazz was mixed with something else. Something strange. From the window in the building, you could now see what looked like an endless parade of drunk, but happy people, all wearing their student graduation caps.

“About 130 people turned up, and we sat there, stretched our necks and thought ‘what on earth is happening?’” A naked man came in running. It took a few minutes before it dawned on us, who they were and what was about to happen. We thought they must have been high school students,” says Sebastian. However, this turned out not to be a traditional graduation tour for Danish high school graduates, but a group of festive sports science students on a tour of Friday bars.

The sport science students had actually given prior notice of their arrival. One month before, they had asked for permission to stop by the Roland Bar on their sojourn around the many Friday bars at UCPH. But somehow the chairmanship of Roland Bar had, in the din of ascending scales and debates over pop culture, forgotten that they were turning up. And they were therefore completely unprepared for the chaos of a party which more than 100 people normally entails.

Now, the empty velvet box back in the Roland Bar stands as a symbol of that terrible evening

And as the party swept over Roland Bar, the jazzy lounge turned into a jumble of flapping arms and legs, pushing, jumping and dancing in the confined space. Coat stands were pushed to the ceiling, mannequins were fondled, and they resisted. And just as quickly as the party had engulfed the Roland Bar, just as quickly it was all over again. Left behind was Sebastian, standing in the middle of the wreckage, and trying to take stock of the consequences.

“We had seen a mannequin head disappear out the door, people had taken cushions, rugs and our coat stand – everything that was not bolted down. It all went so fast,” says Sebastian and continues:

“We had lost a clock, the mannequin was lost, and our singing flamingo was gone. And our lovely, large, patinated tequila signs. This was it … we could live with this, because even though these things have sentimental value, it can be replaced, so we thought ‘well, that was that!’”

But it was not. In the middle of the chaos, no one had discovered that the velveted pedestal, upon which The Golden Banjo was placed, stood empty. Since the golden banjo had been retired as a trophy for the annual musicology song contest back in 2010, it had held court here. “You know … it saddens my musicology heart. Now, the empty velvet box is left here in the Roland Bar as a symbol of that terrible evening

We hope and believe that it is out there somewhere.

The golden banjo has a long history. It was purchased in 1993, the same year that the students’ musicology song contest MiGP was founded.

Up until 2010 the banjo was the winner’s trophy for the competition, and each year it was presented by a celebrity as the ‘Jytte’ prize. Danish celebrities Jørgen de Mylius, Trine Dyrholm and Margrethe Koytu have been some of the presenters of the Jytte trophy.

From 2011, the banjo became a perpetual trophy, upon which the year’s winner’s song title was engraved. The banjo has been exhibited since 2011 at the Department of Musicology – first at the department’s old address on Klerkegade street, later at the Roland Bar on South Campus.

The Roland Bar has not yet succeeded in finding out where the golden banjo is. But they are asking anyone who has information about the banjo or its location to contact them.

“Nobody knows where, or with whom, the banjo is today, but we have not given up. Its box is still in the Roland Bar, as a symbol of our hope that the golden banjo will one day find its way home. We hope and believe that it is out there somewhere.

Sebastian Clausen appeals that people don’t hold the sport science students responsible for the evening’s events. They have covered the bar’s financial losses and cooperated in the subsequent process. And none of them have been able to explain what happened to the golden banjo that alcohol-dazed April evening.

The chairmanship encourages people to contact the Roland Bar on rolandbar@live.dk, if you have any information that can lead to the banjo coming home.