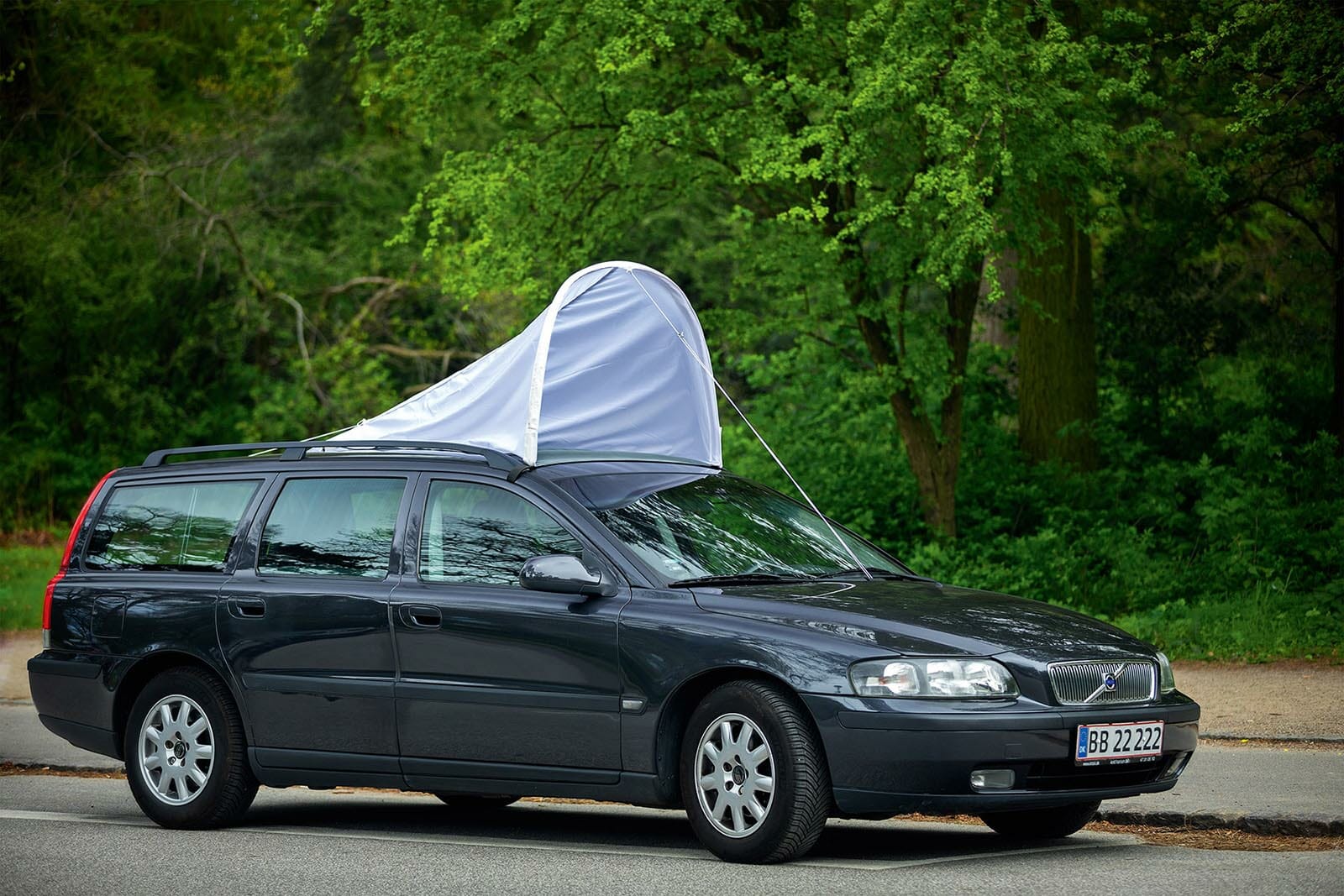 It takes just two minutes to tether the net on the roof of the car, and everyone can when owning a car. Max speed while driving is 50 km per hour - and it only works in dry weather and in calm wind conditions.
image: Carsten Seidel

Research — UCPH researchers want 300 Danes to help collect flying insects in huge nets mounted on their cars, transforming them into an “insect mobile.” It will be the first study of its kind in Denmark.

Professor of nature management Anders Tøttrup has a plan which may sound strange at first: he wants citizens to go for long drives with a large, white insect net mounted on the roof of their car.

All in the name of science, of course. Tøttrup researches insects at the National Natural History Museum at the University of Copenhagen and says there is a need for a closer study of the small creatures which play an important role in our ecosystems.

“The insect fauna are doing badly. There are fewer species, and the number of total flying insects is shrinking,” says Tøttrup.

He refers to research carried out in other places in Europe. In Germany, a thorough – in Tøsttrup’s words, “extraordinary” – study shows that over just 27 years, the number of flying insects has decreased by up to 82 percent in selected species.

Denmark has not yet carried out a similar project gathering accurate and systematic data on all insects. Although the Danish insect researcher has specialist knowledge of individual species such as certain butterflies and odonata, there is still a long way to go before arriving at a comprehensive overview.

While the German project is an important contribution to the field, it cannot be directly overlayed onto Danish conditions. German data is secured from places which – although they vary – all lie in protected nature areas.

One requirement for a similar Danish study is that it document a broad cross-section of insects found in Denmark, divided into living areas, species, how many insects are found in total and according to the insects’ biomass.

To be able to create the large scale insect overview, Tøttrup will use two methods, which represent two new ways of doing things within the field of Danish insect study.

First, he relies on a method known as citizen science, by incorporating at least 300 civilians in the gathering process. At least 150 of them must take four car over the summer, and the other 150 will drive four trips next year. They will take predestined routes through agriculture, cities, forests and open natural habitats with a hedge or meadow, as well as routes along wetlands and lakes.

The insects are to be caught by the insect net on top of the cars, and in this way project Insect Mobile will gather its data (in the form of insects) without investing heavily in specialist salaries, says Tøttrup.

The other method is helped along by rapid developments in genetic studies. Today, researches can make DNA extractions so quickly and efficiently from the collected insects that Tøttrup will use the method in Insect Mobile.

A DNA extraction both reveals which species have been captured and as well as the captured biomass of all the insects divided into species. Five years ago this could not be done – and it makes things much easier.

“We therefore only need to categorize the insects into three rough sizes before the DNA extraction. Before, a manual categorization would take one person an entire day to achieve, and the Insect Mobile will send around 350 civilians off, who each take four trips. It would not at all be achievable if we had to sort all the insects manually,” says Tøttrup.

Tøttrup works at the Centre for Macroecology, Evolution and Climate at the Natural History Museum, University of Copenhagen.

His major interest in the study of insects stems from his study of birds before receiving his Master’s in biology in 2004.

The insects have lost their habitats

Tøttrup stresses why it is so important to study the insects and why it is terrible news that their numbers are declining.

Insects assist in the pollination of both flowers and plants, they break down nature, they are food for both birds and other animals, and therefore they are crucial players in all ecosystems.

He also has some ideas about why the numbers are shrinking.

“For decades they have had fewer habitats and we have now begun to see the impact of that. Water is being drained away and wetlands and lakes are disappearing. Nor do we have large, dead animals in Danish nature, and many insects are specialists in breaking down carcasses, Forestry operations have also become so intensive that we no longer allow trees to lie there and rot, which previously functioned as “beetle hotels” and places where butterflies larvae grow in the Danish forest.