The machine that sniffs out the world's earlier life forms 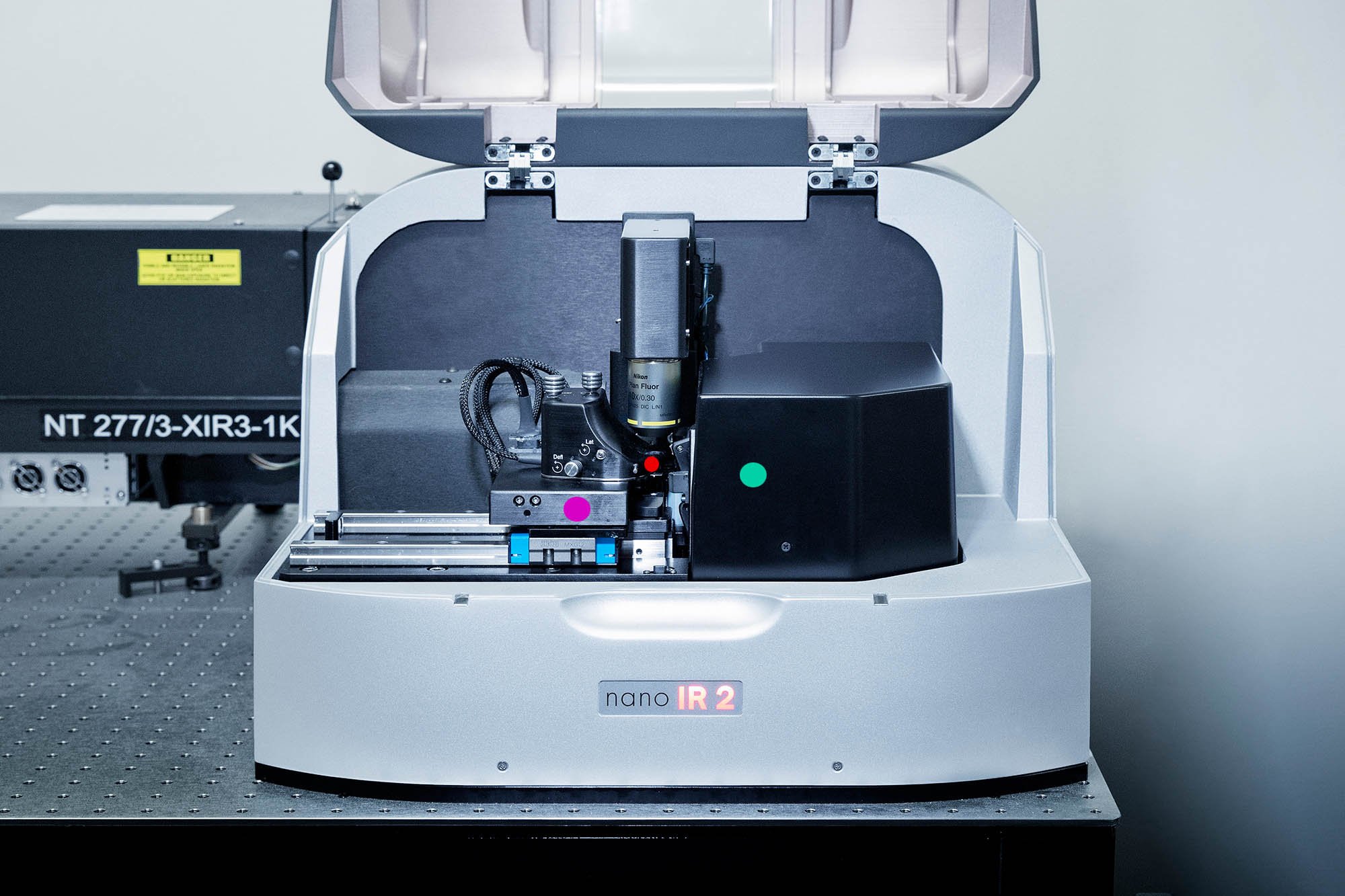 NanoIR2 is about half a metre wide and can fit on a table top. The captions to the right of this article explain what is behind the pink, red and green dots.
image: Carsten Seidel

New knowledge — A DKK 2.6 million apparatus was originally purchased for research in the oil industry. Today, chemistry lecturer Tue Hassenkam uses it to sniff out the birth of life on Earth. The device has already played an important role in a discovery that he published in 'Nature' in July, and now he dreams of looking for traces of life on Mars.

Actually, the story about looking for the first life on Earth started with a story about the pursuit of oil.

Red dot: One half of the microscope consists of a so-called atomic force microscope that does not use light but a nano-scale needle mounted on a lever that moves across the surface of the object of examination. It is possible to control the surface in all directions by one millionth of a millimeter precision.

Pink dot: A laser beam illuminates the needle’s lever to reflect the laser beam. Its reflection is detected and reveals the physical structure of the surface because the lever has to move due to the movement of the needle over obstacles.

Green dot: The infrared spectrometer warms the surface using different wave lengths of light from laser beams. Different particles on the surface extend differently, depending on what they are made of, and by comparing the measurements in NanoIR2 with a database of all known substances’ extension through the impact of heat, it is possible to determine what lies on the surface.

It started with a DKK 2.6 million donation from the energy giant BP. This enabled chemistry lecturer  and his colleagues at the Department of Chemistry, University of Copenhagen to invest in one specific piece of laboratory hardware: The so-called NanoIR2.

It can accurately reveal what is on the surface of a subject and thereby also tell us about the past.

BP was however primarily interested in extracting more oil from the North Sea, and with NanoIR2, Tue Hassenkam and his colleagues could be better at predicting how to best get the remaining oil out of an existing reservoir of oil.

The story, however, took an unexpected turn when BP changed its strategy so that Tue Hassenkam’s NanoIR2 no longer had to look for oil for the energy giant. Suddenly, the science fiction-like device was available to search for life on Earth because it could so accurately reveal all organic material, right down to sizes in the nano-scale.

NanoIR2’s unique characteristic as a kind of ‘sniffer dog’ is due to the fact that it uses two technologies, both with impressive accuracy. One of the devices in the device is AFM (Atomic Force Microscope – or in Danish an ‘atomic power microscope’). The technology is so delicate that it is possible to ‘see’ surfaces in a 1000 times better resolution than with a conventional light microscope. The AFM feels its way forward in three dimensions of space with an ultra-small ‘needle’, in principle one nanometer (one millionth of a millimeter) at a time.

The other technology is the InfraRed Spectroscope (IR) that can be used to determine exactly which chemical substances are on a surface, even if the substance is found only in microscopic quantities. Different wavelengths of laser light heat up particles on the surface of the object. Then, the needle in the NanoIR2 detects the particles’ different expansion rates, thereby revealing what the substance is made of, as all substances expand differently when heated.

With NanoIR2 in the laboratory, Tue Hassenkam was able to trace the earliest life on earth. He applied for, and received, a donation from the Villum Foundation’s experiment pool, and started at the same time a collaboration with UCPH professor Minik Rosing, who provided him with 3.7 billion year-old rock samples from Greenland for analysis in the NanoIR2.

An example of one of the pictures Tue Hassenkam got from a NanoIR2 scan. The scale is micrometer (μm, which is one millionth of a meter, 1000x larger than one nanometer). The image in the picture is 3 x 5 μm. The red fields are signs of life where nitrogen is bound to carbon, while the blue area is the mineral it has been captured on 3.7 billion years ago.

It was Minik Rosing who, in 1999, and based on other analyses of the 3.7 billion year-old rocks that he discovered in Isua in South West Greenland, proposed a controversial theory that life on earth had begun several hundred million years earlier than previously assumed.

Now, by using the NanoIR2, Tue Hassenkam could confirm Rosing’s theory of Earth’s earliest life. On 24th July this year he published an article in the recognized scientific journal ‘Nature’ about it.

Minik Rosing’s controversial theory is now much closer to final scientific recognition. It has become more difficult for critics to argue that the organic material found in the rocks originated from later contamination or due to coincidence.

The uses of NanoIR2 are far from exhausted with the discovery of the earliest life on Earth. Perhaps it can also be used to search for traces of life on Mars:

“I have already received meteorites from other researchers, including geology professor Minik Rosing, which I have studied with the NanoIR2. If at any time I could get a rock sample from Mars, taken back to Earth from a trip to Mars, investigating it would be fantastic,” says Tue Hassenkam.

Researcher in nanoscience and employed as an associate professor since 2009 at the Nano-Science Centre at the Department of Chemistry at UCPH.

Graduated as a solid state physicist in 1997 and holds a PhD with a focus on molecular electronics.

They actually tried to send an AFM to Mars, but the device requires so much continuous adjustment (from a human being, ed.) that it is not possible to get any useful results from it. Instead, samples must be brought back to Earth to be examined for life, explains Tue.

However, he adds that there are many people involved in the hunt, and that an analysis like this is not possible right now. The Mars meteorites found on Earth are most likely contaminated with organic matter from here, and the samples should therefore come directly from Mars if the question of whether there has ever been life there has to be answered once and for all.

There are only about 50 locations throughout the world that have laboratories with a NanoIR2 device – some of them are at universities, others in companies. NanoIR2 first appeared on the market a couple of years ago, and it therefore gives researchers a good opportunity to make discoveries which no one else has done before. It’s all about coming first.

As for the possibility of finding traces of any life on Mars using NanoIR2, then its precision is impressive, verging on scary. It has to work on the nanometer scale to reveal any microscopic residues of carbon from life, and it does so quicker than all previous research methods.

It cannot ‘see’ directly the residues of life that is several billion years old. There is absolutely no DNA left, but the correct combination of carbon, oxygen, nitrogen, and phosphorus elements reveals that there has once been life, and this is what the NanoIR2 can sniff out.