The morning view of a polar researcher 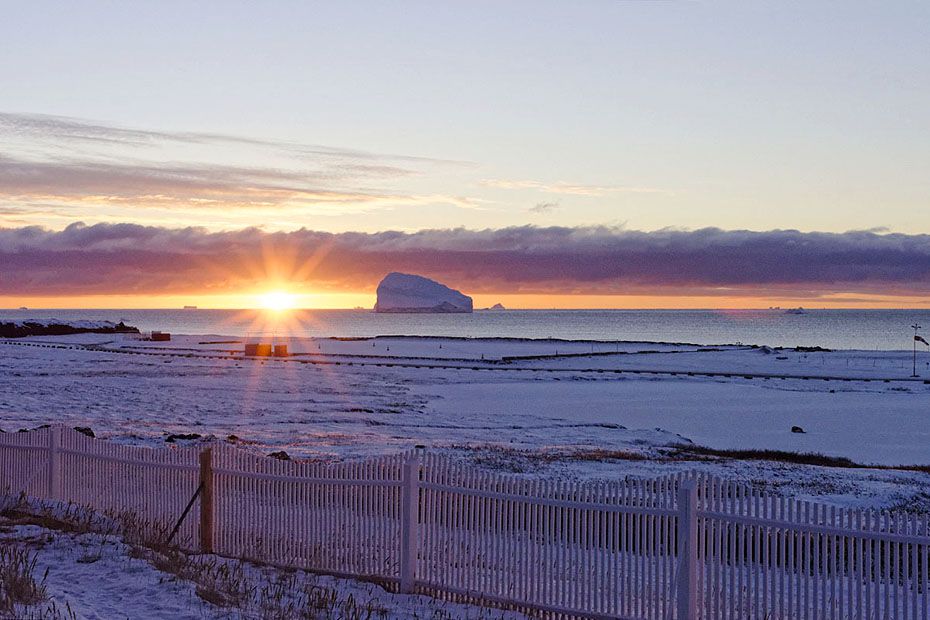 A large iceberg, way off the coast of the Arctic Station in late October 2016
image: Anders Fjeldberg

ADVENT CALENDAR 2016 - View from the University of Copenhagen's Arctic Station in West Greenland. Can you see what it is on the beach? See the photos and follow the Greenland trip in the days up to Christmas Eve

When station manager Casper T. Christiansen of the Arctic Station in West Greenland gets up in the morning and looks out to the east, his view is the picture above.

At the end of October there was a huge iceberg off the coast, and then there is something else in the picture.

If the reader believes he can see football goalposts on the beach exactly under the sun and just above the small, dark boxes, then the reader is right.

The explanation is that a wealthy man, originally from the harbour town of Qeqertarsuaq, who has made money from shrimp fishing, paid for and built a football field with astroturf, including football goalposts and changing rooms buildings.

During the day it can seem absurd to look down on the green ‘grass’ when the snow does not cover the field completely at the end of October and with an iceberg behind. But even if you rub your eyes, it does not disappear, and Greenlanders love to play football.

The football field has just been finished this autumn. So the soccer-happy Greenlanders from the harbour town of Qeqertarsuaq 800 meters from the Arctic Station will have to wait until next spring to play.

This morning photo was shot out of the Arctic Station living room window, while Casper T. Christiansen sleeps in his own wooden house about 200 meters away.