The punk rocker in the South Campus book shop 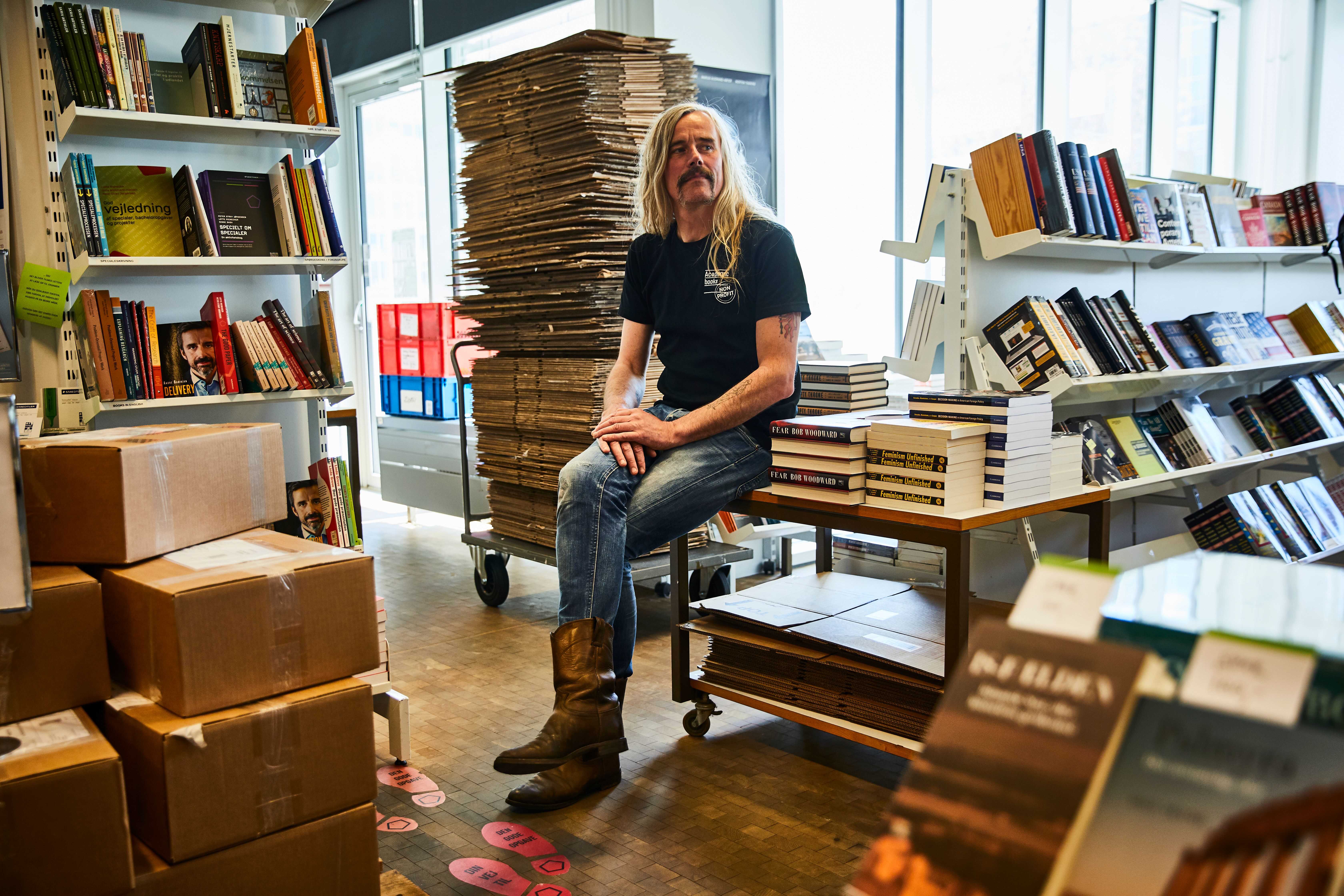 Book seller - »I am still really curious about new books, and I think it's great when something new turns up about Eastern Europe or about music,« says Morten Kjersgaard Nielsen, who works as a bookseller in Academic Books.
image: Jonas Pryner

My job — Bookseller Morten Kjersgaard Nielsen is intent on turning Academic Books into an experience – perhaps a little bit outside the syllabus.

Among colourful shelves of academic titles, the rock star of South Campus is jamming on his keyboard. A student has ordered a book, and the long-haired bookseller jumps up off his office chair to meet her.

This is a typical Morten Kjersgaard Nielsen reaction when he is at work in Academic Books on South Campus. A steady flow of young humanities, law and theology students are serviced, and he is happy to chat.

52 years old. Lives in Søborg with his wife, father-in-law and three children

Master in Cultural Geography and Eastern European Studies from the University of Copenhagen.

Has worked for 13 years as bookseller in Academic Books on South Campus.

Has previously worked for the think tank Baltic Development Forum and in the books department at Magasin Lyngby.

Has for the last 20 years played in the punk band President Fetch.

»It is everything from the young theology student, directly from the father’s vicarage on Funen, to a man who is interested in a particular mediaeval philosopher. This range is very interesting,« says Morten Kjersgaard Nielsen.

He graduated from the University of Copenhagen in the field of cultural geography and Eastern European studies, so the academic interest is not something that came out of the blue. But he took some detours before landing at the book shop on South Campus 13 years ago.

»We staff are all a mixture of down-and-outs and misplaced academics,« he says in a thick Jutland accent.

After his education, he was given an internship at the think tank Baltic Development Forum created by the then former foreign minister Uffe Ellemann-Jensen, but he was not subsequently offered a job.

Since then, he has worked with books. First in the Magasin store in Lyngby, then at the Academic Books at CSS campus. For 13 years now you have been able to meet him at the bookshop on South Campus.

For Morten Kjersgaard Nielsen, the working day usually starts at 8.30 with a brisk bike ride in from the Søborg suburb. Then the time passes with what he calls ‘hard core book selling work’: In addition to serving shop customers, he orders and receives selected titles from all over the world, including books on the students’ syllabi, and books he just finds interesting himself.

»I am still really curious about new books, and I think it’s great when something new turns up about Eastern Europe or about music,«
he says.

It is usually his initiative if there are books on the music shelves that are not on the syllabus lists. There is a book about the British rock critic Lester Bangs, for example, who happens to have the same moustache as Morten. Or vice versa.

When he’s not at work, he has for two decades now been the lead singer in the band President Fetch. They play »dirty rock’n’roll laced with a bit of punk,« but Morten Kjersgaard Nielsen has never made music his career:

»People are idiots. You would meet assholes all the way. This is not my kind of thing,« he says.

For him, the combination of music and books is ideal. He likes his job, because his »Jutland-rural heart of Texas« thrives in the service industry:

»The best part of it is the customers. I very seldom meet anyone who is pissed off – most are nice, and most are up for a good discussion about this and that,« he says.

That’s also why a job in Morten Kjersgaard Nielsen’s specific academic field did not tempt him. If did not continue working in the bookshop, he dreams of owning a pub. A pub, where academic books are also lobbed across the counter.

»I will buy a pub one day, I am almost certain of it. But first I just have to get a grip on my own alcohol problem,« Morten Kjersgaard Nielsen laughs.