The quest for the unknown books of Islam 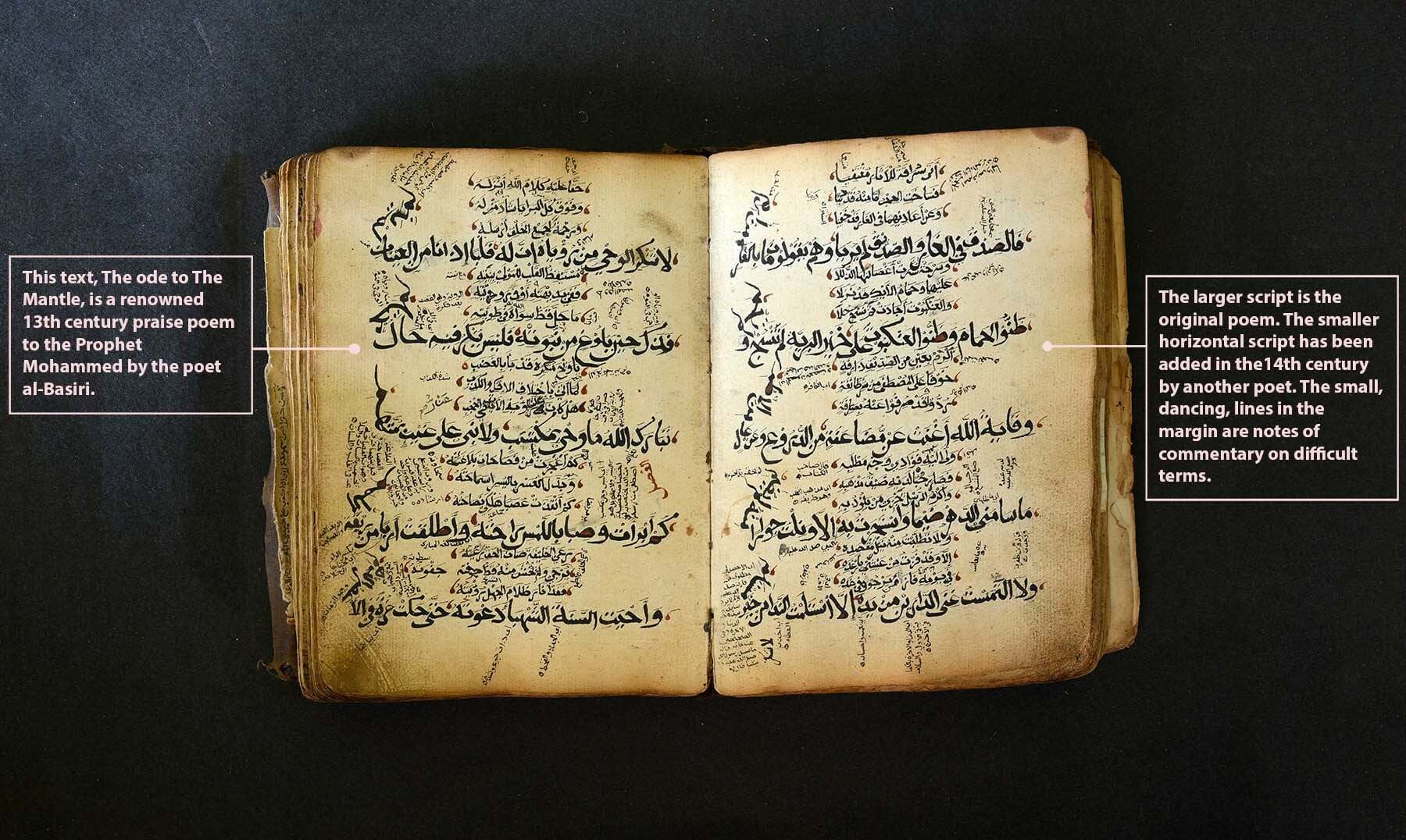 A glimpse into a rare book, The Ode of The Mantle, from the Islamic world of the Horn of Africa region. This – and many other books – have been found on countless expeditions in Africa.

Research — An associate professor in Arabic has collected Islamic texts in East Africa to find out how they have spread. They are in an online database on South Campus.

Alessandro Gori has been in Africa several times to track down Islamic books and collections of texts previously unknown to researchers at the world’s universities.

»It has been interesting to be among the first to study how the texts have been handed over and spread in the region around the Horn of Africa. This contributes to our knowledge of how a culture changes when it can no longer avoid modern influences,« says Alessandro Gori, an associate professor of Arabic language and literature at the University of Copenhagen.

From his office on the first floor of the KUA2 building on South Campus, he has been principal investigator on the project Islam in the Horn of Africa, which has studied the production of Islamic literature in countries such as Ethiopia, Eritrea, Djibouti and the parts of Somalia that it has been possible to visit.

The project has lasted from July 2013 to December 2018, when researchers carried out their last expedition.

Associate professor in Arabic language and literature at the Department of Cross-Cultural and Regional Studies (TORS) at the University of Copenhagen. He has worked with nine researchers and four staff from seven countries on the project Islam in the Horn of Africa, which is funded with an Advanced Grant from the European Research Council.

Among the 2,500 texts they have found are theological texts, legislative texts and historical texts – in addition to texts that are intended to be sung, and which provide instructions on how to live up a Muslim life.

Alessandro Gori is very satisfied with the result. It is not him who has analysed what the texts have meant in terms of culture. This is a huge task in itself, he explains. His task has been to collect the texts and categorise them for the University of Copenhagen, so that other researchers can carry out further studies. And he thinks that he has found many of the right books and texts for this purpose.

»The texts constitute the intellectual background and basis of the cultural history that these societies are based on. It corresponds to Muslims from the Horn of Africa coming to Denmark to look for our texts and finding Saxo Grammaticus, Pontoppidan, Martin Luther’s Confession Augustana or the Højskolesangbogen song book, in order to study Danish culture,« says
Alessandro Gori.

Today, all of the texts are photographed files in an online database at the Department of Cross-Cultural and Regional Studies, freely available to all interested parties.

The oldest manuscript in the database is from the end of the 17th century. It is not particularly old in an Islamic context, but this is not important, according to Gori.

More important has been to determine how the texts have circulated in the region – and how they continue to do so today. There have not been many printing presses on the East African peninsula, so the vast majority of the books have been copied by hand. This, however, has had a strong tradition, actually right up to the 1990s, according to Alessandro Gori’s experience. Today the area’s Muslims have started reading the texts as PDF files. They have, so to speak, jumped over the printing era.

»In some cases, they avoid completely the reading of a text from a printed book. Instead, they take the text from a handwritten manuscript, make a full PDF of it and read it on their tablet. Because they can prefer reading a handwritten text to a printed one,« says Alessandro Gori, who has himself experienced this practice among Muslims that live in relative isolation in the Horn of Africa.