The 'shambles shop': »You almost get the feeling that you are stealing something, but it's actually okay « 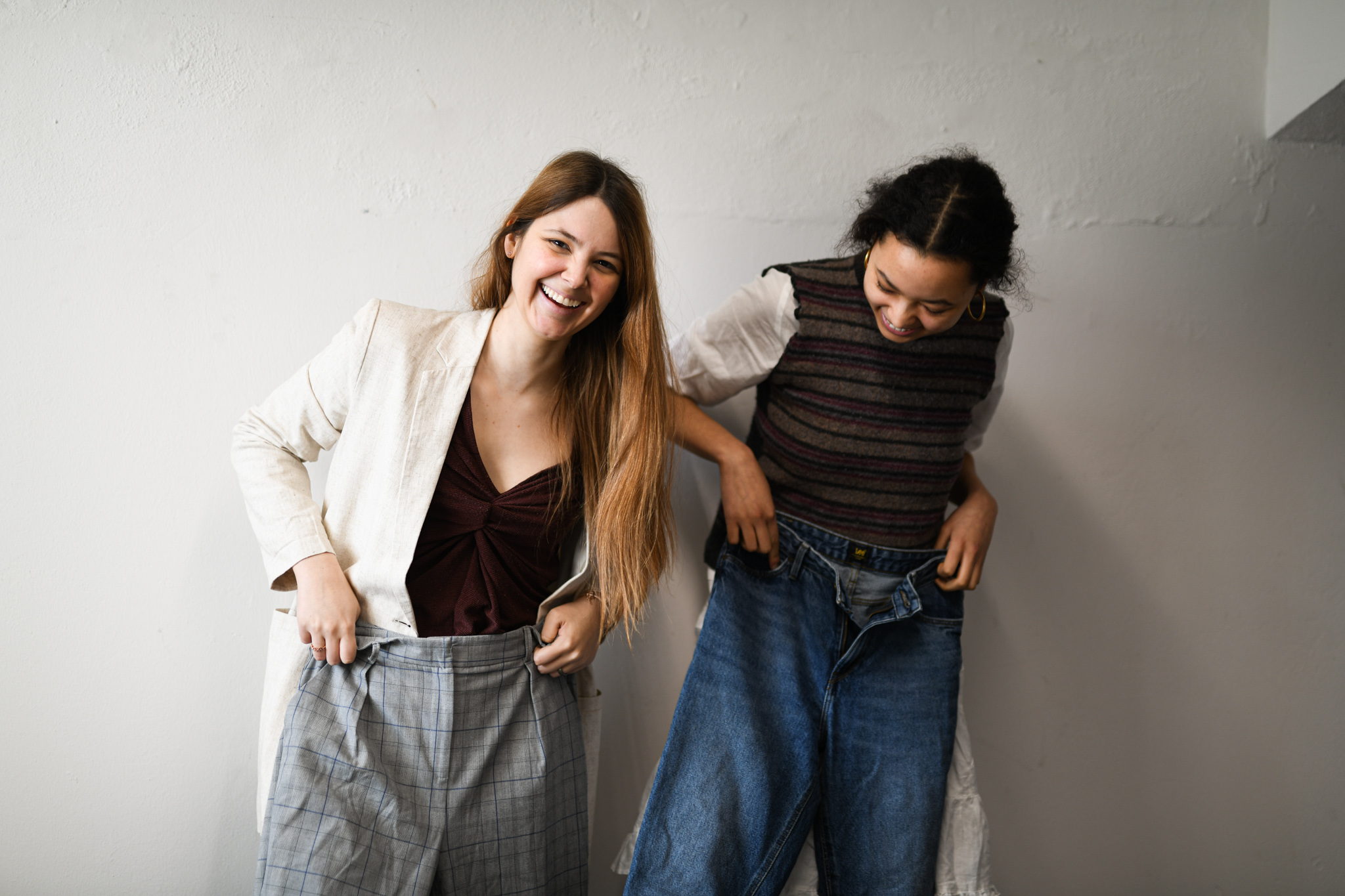 Raramai Campbell (right) and her friend (left) look at some clothes that have been donated to the Rodebutikken shop.
image: Meike Sørensen

It is free, and it is climate-friendly. The student association’s Rodebutikken, or ‘shambles shop’ is a swap centre that wants to shake up how students consume clothing.

Halfdan Wulff Ekins shuffles around in a creaky IKEA bag in the corner of the Rodebutikken basement at the CSS campus on Øster Farimagsgade.

»This is where we have the stuff that we have not yet found space for,« he says. »I think that people are really good at bringing in large IKEA bags full of clothes and stuff.«

Handing in and ‘buying’ clothes can take place within the opening hours of the Rodebutikken.

Do you want to be a volunteer? Contact co-founder Halfdan Wulff Ekins in the email: pgt191@alumni.ku.dk

The swap centre Rodebutikken is opening its doors for the first time in its new, permanent, premises on a sunny Monday in February, and the final things are about to be unpacked. The corridor is empty outside, because the association has not done much to promote the event, explains Halfdan Wulff Ekins, who is the co-founder and who studies anthropology on the sixth semester.

»This doesn’t really matter, because we would like to start the shop quietly,« the shop’s volunteer Raramai Campbell adds. He is studying for a master’s degree in global health.

The Rodebutikken’s purpose is nothing less than a small-scale revolution against consumerism and the so-called ‘fast-fashion’ – that is, quickly-changing trends, and purchases that are only used a couple of times.

In the Rodebutikken, which has been given permanent premises in Building 1 at CSS, everything is free. You can take as much as you want from the shelves, and just march out the door afterwards. There is only one requirement: That you take something that you can use, and that you are glad to have. The students can donate as much, or as little, as they want.

As we speak, one of Raramai’s student friends drops by at the shop with a couple of bags full of clothes that she does not wear anymore. As we speak, the three students sort it together.

»It’s crazy how much clothing I have just lying there at home that I just don’t use,« the friend says and holds up a cardigan that she once bought on her travels.

The concept of the Rodebutikken is not rocket science, but it is far from the way we are accustomed to consume, according to Raramai Campbell:

»I became a volunteer in the association because I felt that I had to give something back for the things that I had taken from the shop. I took a couple of nice gold earrings home with me, but I almost had a feeling that I had stolen something,« she says.

»But you are in some ways, also giving something back by taking things from the store,« Halfdan Wulff Ekins adds, »because it is a more sustainable consumption of goods that we are in the process of doing here. What you ‘pay’ is a kind of ideological currency: You help by ‘spending’ more sustainably than just buying new things.«

Halfdan Wulff Ekins looks through the things that are to be displayed in the shop.
image: Meike Sørensen 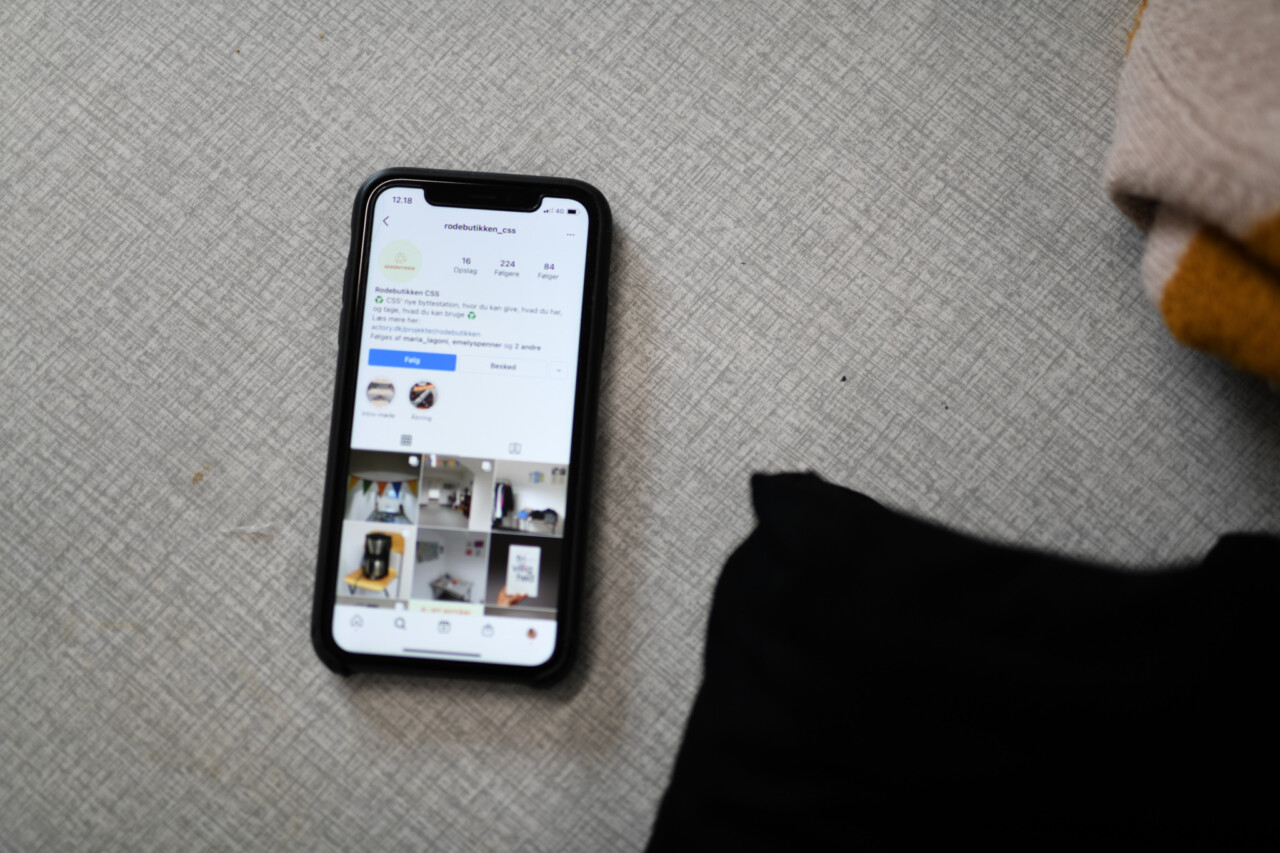 Until now, most of the shop's marketing has gone through their Instagram profile @rodebutikken_css
image: Meike Sørensen 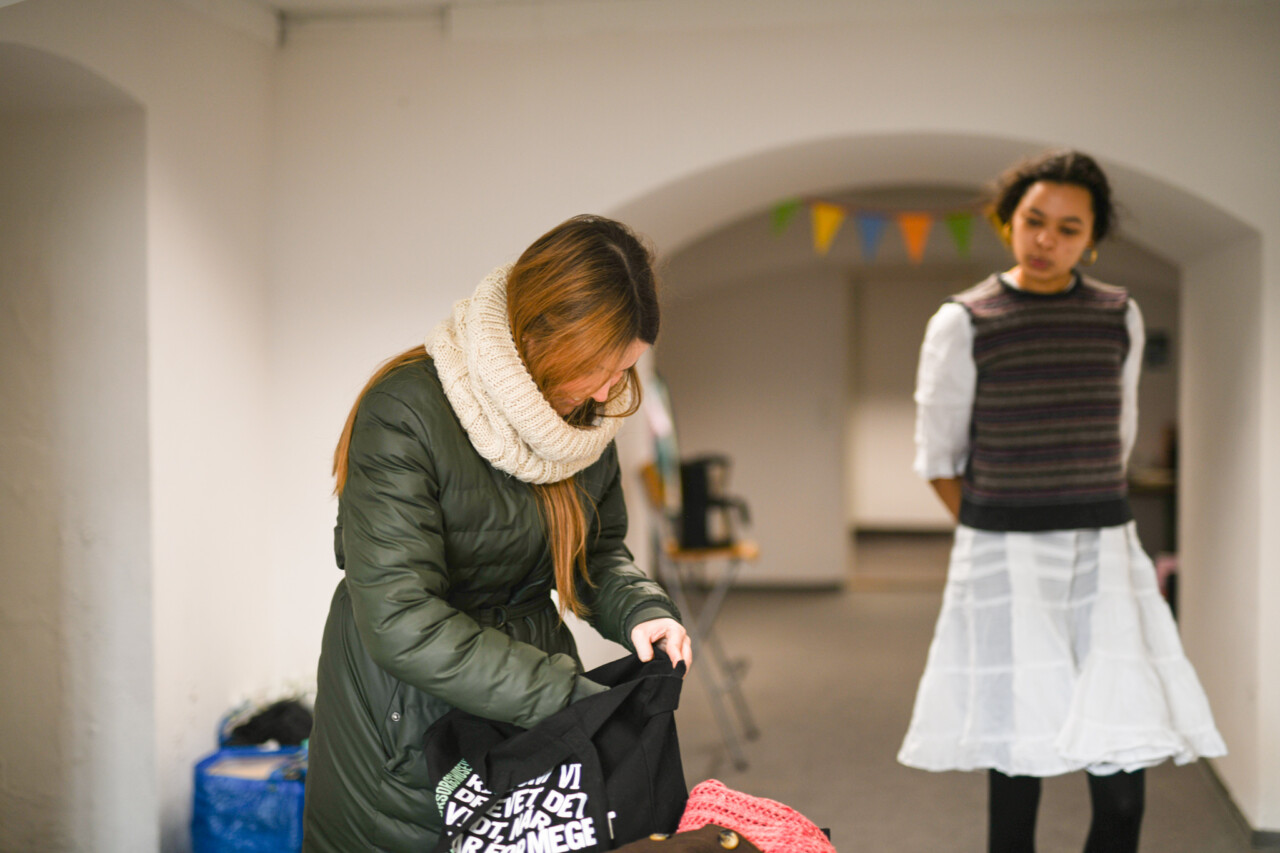 The opening day is moving on, and people drop in and look around. A couple are standing by the shop’s bookcase and stuff a couple of novels into a backpack. One of them is Orhan Pamuk’s The Black Book.

Halfdan Wulff Ekins is a co-founder of the Rodebutikken. He is satisfied with the few visitors that are there:

»In fact, I feel that if just one person finds something good here instead of buying something new, it’s a good day for me,« he says.

He and Raramai Campbell are big fans of recycling, and they hope to be able to pass on the habit to their fellow students with one, simple, step:

»It needs to be easy and convenient to collect, and to get rid of stuff. That’s why it’s perfect that the Rodebutikken is on campus. We hope that people will swing by during their lunch break and stumble upon some good stuff,« says Raramai Campbell.

The shop has just received a donation from the Genstartspuljen fund, which they will partly use to decorate the rooms so that visitors can also hang out in the basement.

»I think the cool thing is that if you have the time and patience, you can find really cool things here in the Rodebutikken that you would not have found anywhere else or for the same price. And it’s great to be able to think ‘I don’t know who used to have this, but it’s cool’,« says Raramai Campbell.

Your University Post correspondent also put a couple of good things into her bag: A pair of jeans that had been on her wish list for a long time, and a ladle she needed in the kitchen.