The teachers are men - the students are women 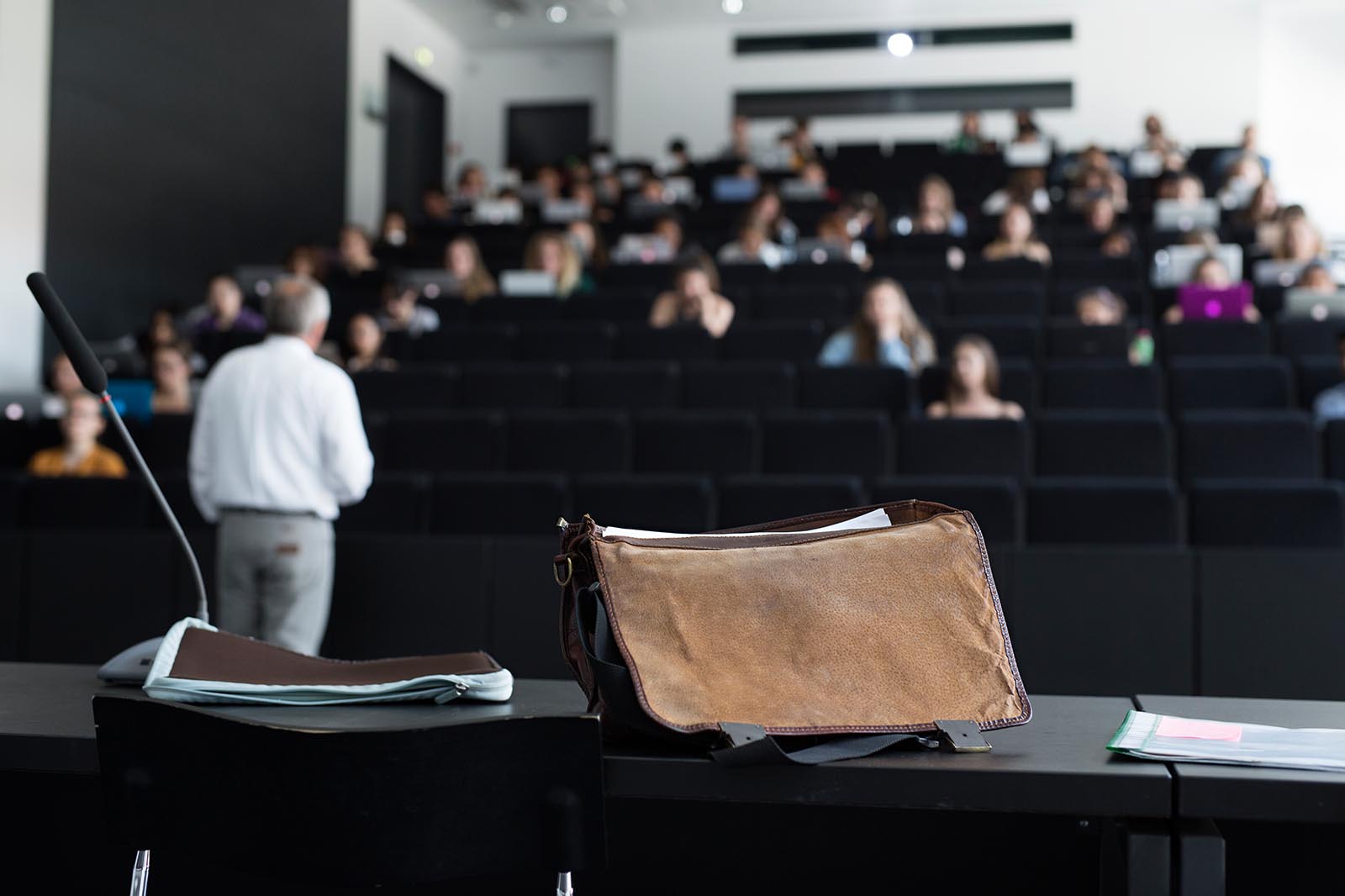 Gender differences — While most of the academic staff at UCPH are men, there are more female students. Is this a problem at all, and is one imbalance worse than the other?

6,873 new students have just been admitted to the University of Copenhagen (UPCH).

of them are women, and when they put their feet in the auditorium for the first time, most of them are likely to be taught by … a man.

of the professors and 61.5 per cent of the associate professors at UCPH are men. In total, only one third of the academic staff at Danish universities are women.

Why make a difference

The predominance of men in the top of the university hierarchy is well-documented and frequently discussed.

From 2008 to 2013 UCPH even gave a financial bonus to departments that hired women professors as part of an action plan for diversity, and there is a new plan called ‘Action Plan for Career, Gender and Quality’.

The predominance of women among the student body has not received the same attention, and this has led associate professor Jes Fabricius Møller of the Saxo Institute at UCPH to write a featured comment in the Kristeligt Dagblad newspaper.

“The interesting thing is that those who zealously draw attention to the gender gap among the staff at the universities, rarely focus any attention on the gender disparity among the students. They apparently do not find it to be a problem that relatively many men opt out of higher education, while it is still considered a problem that relatively many women do not choose a university career,” he writes.

Jes Fabricius Møller emphasises that he is not trying to ignore the problem of the too-few female academic staff.

“My point is that if this is a problem, then so is the other thing. It’s all about getting as much talent into the game as possible, and we can see that there is a significant imbalance in recruitment to many study programmes,” he says.

He points out that we have actually seen a steady increase in the proportion of female professors among the employees at the University.

The women’s share has increased from 15.3 to 22.2 per cent in the period 2007-2015, and their number has more than doubled since there has been a huge growth in the total number of academic staff.

As a woman you need to reflect yourself in female researchers. We need to do something so women to a higher degree feel that it is possible to get a research career.

“One of the main reasons why the process is so slow is that staff turnover at universities is almost exclusively through retirement at an advanced age, now especially after the 70-year limit for employment in the public sector has been abolished. A significant part of the current composition of staff is a result of decisions made 20, 30 or 40 years ago. But it is clear that there is a generation of female academics that cannot use this fact, that things are changing slowly, for anything. They feel that they have missed the bus, even though they actually have a greater chance of getting the jobs that they apply for than their male colleagues,” says Jes Fabricius Møller.

On the other hand, there has been virtually no development in the men’s application for higher education since 1996. Their share has increased from 40 per cent in 1996 to 42 per cent this year.

Both genders have favourite subjects

The figures for this year’s admissions show that the situation varies considerably from subject to subject.

In Public Health Science, for example, have they admitted 64 women and 6 men, in Animal Science 58 women and 4 men, and in Danish 148 women and 41 men.

In Computer Science, however, 45 women and 198 men have been admitted, in Physics Subjects 39 women and 103 men, and in Economics 127 women and 203 men are about to begin their first semester.

In some study programmes, the gender distribution is perfectly equal, like in Agricultural economics, where they have admitted 21 of each gender and Theology with 65 of each.

It is not a problem that the female students of Psychology are extremely competent, or that there are highly skilled male university researchers

Whether it is a problem that a study programme has an intense preponderance of one gender, is discussed at the moment in Psychology, which has admitted 193 women and 39 men.

The ’12’ grades in upper secondary school have not just been awarded on the basis of the students’ so-called earlier maturity, age and parental income. There are several hundred hours of work behind the high grades.

It started with three UCPH staff writing an article in the newspaper Politiken, where they argued that it has unfortunate consequences that the study programme is dominated by very young girls with very high average grades from upper secondary school, typically from affluent homes with academically educated parents.

“As future psychologists, our students must be prepared for several different types of work: They must be able to promote well-being, prevent psychological problems in, for example, schools, daycare and institutions, improve the work environment and organisation in the public sector and in private companies, contribute to the design of new technology and, of course, treat people with mental disorders. This does not just mean milder mental disorders, but also patients with severe psychiatric disorders. The latter group has a clear preponderance of underprivileged people.”

This got three psychology students to that they agree on the objective of ensuring greater diversity and give better opportunities to the underprivileged. But they disagreed with the assumption that it is age, gender and background that determine whether they will become good psychologists.

The study programme’s management should instead take responsibility for educating for diversity by changing the curriculum, which today is both theoretical and inflexible, according to the students.

“Each semester has between 2,000 and 3,000 pages of compulsory syllabus, so if there is one eccentric mind that has found its way into the programme in September, the curriculum will probably try to straighten it out. You can believe what you want, but it is not surprising that theoretically talented students come out of the other end of this system,” they write and add:

“You have in this round of admissions (and the previous ones) received a bunch of talented students who have fought hard for the high grade point average needed, so that they could study psychology. The 12 grades in upper secondary school have not just been awarded on the basis of the students’ so-called earlier maturity, age and parental income. There are several hundred hours of work behind these high marks.

Amanda Büchert is chairman of the Student Council at UCPH and a students of anthropology, that has just admitted 89 women and 17 men for the new year.

She emphasises that she does not speak on behalf of the Student Council, which does not have a declared position on the gender issue. But she personally does not find to be a problem that there is a clear predominance of women on the programme.

She believes that it is cultures like this, as well as the fact that the syllabus literature is clearly dominated by men, which is really the problem. It affects both the themes, and the angles taken on the issues,” she says.

Amanda Büchert also believes that UCPH could take advantage of investigating possible initiatives to increase the number of women in new research positions, in order to break the pattern that fewer women apply for the jobs.

“As a woman you need to reflect yourself in female researchers. We need to do something so that women to a higher degree feel that it is possible to get a researcher career,” she says.

Both gender differences are a problem

Also Julie Sommerlund, Associate Dean for External Relations at the Faculty of Humanities and chairman of the UCPH reference group on gender and career has entered the debate.

She has responded to Jes Fabricius Møller that he exaggerates the small steps that have been made in terms of the proportion of female professors at UCPH.

“I am neither on the women’s or the men’s side in this. I believe that both are structural problems, that we must try to solve. It is too easy just to say that we are dealing with individuals, who each choose a career and education differently,” says Julie Sommerlund.

She adds that the university lives on attracting the most talented people. So it is a problem if you are missing out on talent, if you primarily recruit from one half of the population.

“It is also a shame if we refer to individuals as problems. It is not a problem that the female students of Psychology are extremely competent, or that there are highly skilled male university researchers.

Julie sommerlund adds that many of the structural problems that create gender differences cannot be handled internally at UCPH alone.

Statistics show, for example, that many female academics drop out of a research career in connection with maternity/paternity leave, so she is personally in favour of assigned paternity leave for men.

As for the boys, they are early on attributed character traits which fit academics poorly.