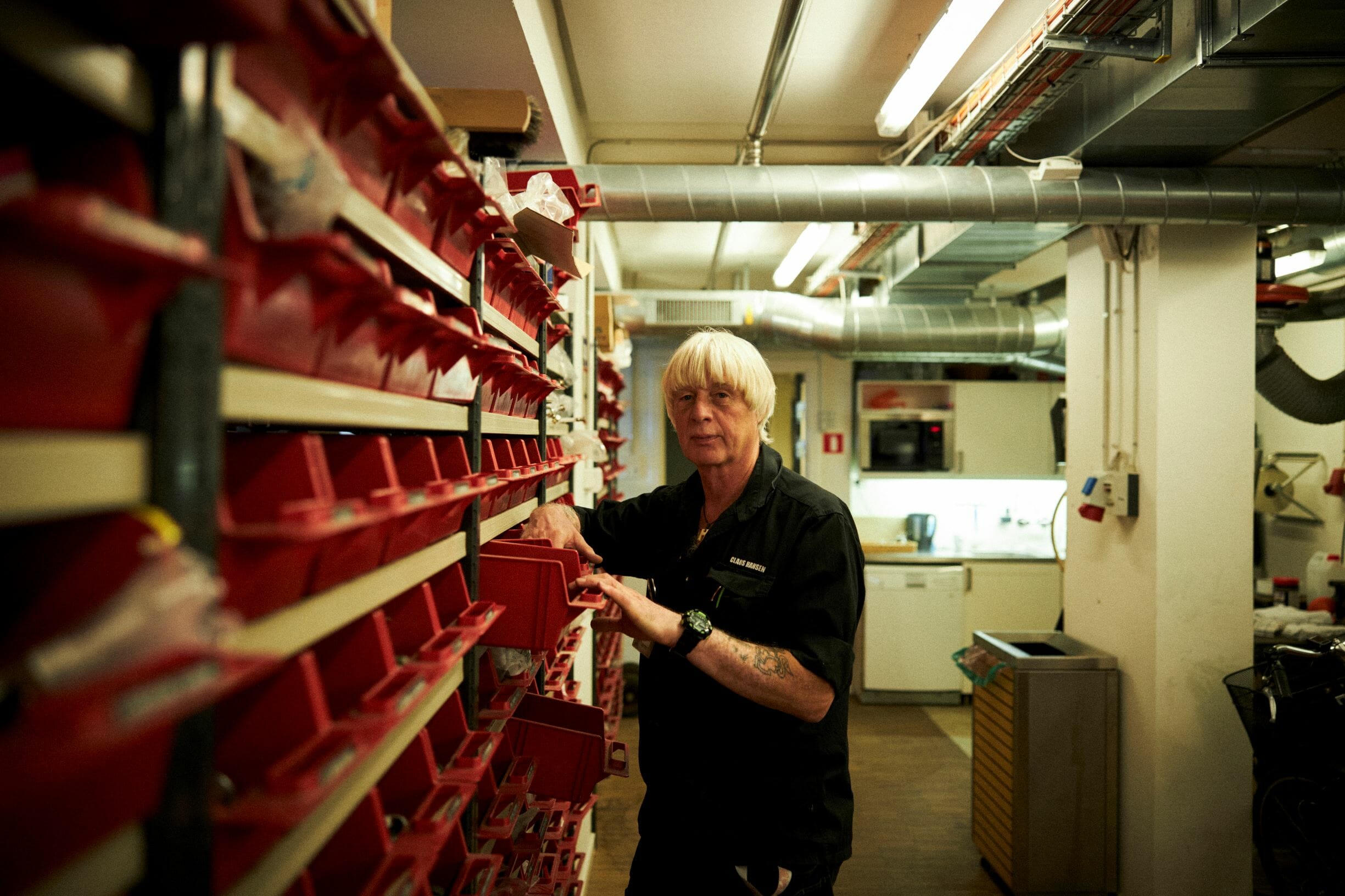 »It doesn't matter whether you are a professor or a labourer. We are on the same level, and this is really important for the working environment.« says Claus Hansen about his job at Pharma
image: Jonas Pryner

My job — Did a pipe burst somewhere? Have the lights gone out? Your key is missing? Who you gonna call? We met Claus 'Fusker' Hansen, go-to guy for students and staff at The Faculty of Health.

Claus Hansen can’t talk when the University Post calls him up for the first time. One of the big vessels that supplies soft water to the laboratories at the Department of Drug Design and Pharmacology is spilling over, and hundreds of litres of fluid are now pouring down through the building and flushing out of every aperture.

66 years old. Lives alone in Østerbro, where he was born and raised. His girlfriend lives in Vesterbro.

14 years employed at Campus Service at the Faculty of Health and Medical Sciences. Worked for two years as a caretaker, and subsequently as an operations technician at Pharma.

Has previously worked at Tuborg and in the community house Blågården in the inner city.

Has been a drummer on an EP with the punk band Cinema Noir, and he often frequents the city’s venues.

That’s how it is, according to the handyman Claus Hansen: »I never know what the day will bring. Two days are never the same here«. If a fuse blows, or if a water pipe springs a leak, you call Campus Service, where Claus has been employed for twelve years in a function which involves many different tasks.

Students and staff often call them up. Some of them even stick their heads into the basement workshop when they need to borrow a bike wrench, or if a bulb has gone in Building 17. At pharma, they practise an ‘open door principle,’ says Claus Hansen. Everyone knows each other, and there is a flat organisation structure throughout:

»It doesn’t matter whether you are a professor or a labourer. We are on the same level, and this is really important for the working environment.«

Claus Hansen, or ‘Fusker’ which his colleagues , is a working man of the old school. With his snake-tattooed arms and gold teeth in his upper mouth he stands out from the usual university clientele.

Claus started at the Tuborg brewery at the age of 19, as the youngest lorry driver in the entire brewery.

»It was back then when you had to be able to carry two beer crates on your back, and [at Tuborg, ed.] we had access to the beer and soft drink fridges 24/7,« says Claus, who is now 66 years old.

Later, he moved indoors to the brewery, and before he noticed, 18 years had passed. The next decade went with various jobs in community centres in the inner city and Nørrebro, and since 2005 Claus, who is a native of the Østerbro district, has been back in his own neighbourhood at Universitetsparken, where pharma is located. They call it suburban Panum, ‘udkantspanum’, with playful reference to the more central, prestigious, Panum Institute location.

The love of a cold draught beer has never left Claus Hansen. The semester’s Friday bars for the employees are written into his calendar. ‘FR’ is written with small blue capital letters next to every last Friday of the month.

In 2019, it is ten years since some employees grabbed an old draught beer keg from a bar and asked rector if he would sponsor a beer bar. Now all employees meet – high and low – over a cold specialty beer and share the stories and holiday photos.

Claus helps to organise this. And then he is happy to pop up at the students Friday bar, the Autoklaven, every now and then for a chat. Because he gets on »really well« with the students, he says:

»They don’t see us just as workmen. Sometimes they might even be a bit too humble because they think we are something special. But I’m nothing. I have no training, I have nothing, I am just an assistant.«

With nice students and good colleagues, Claus Hansen is in no hurry to leave Campus Service, even though he could have opted for early retirement a long time ago: