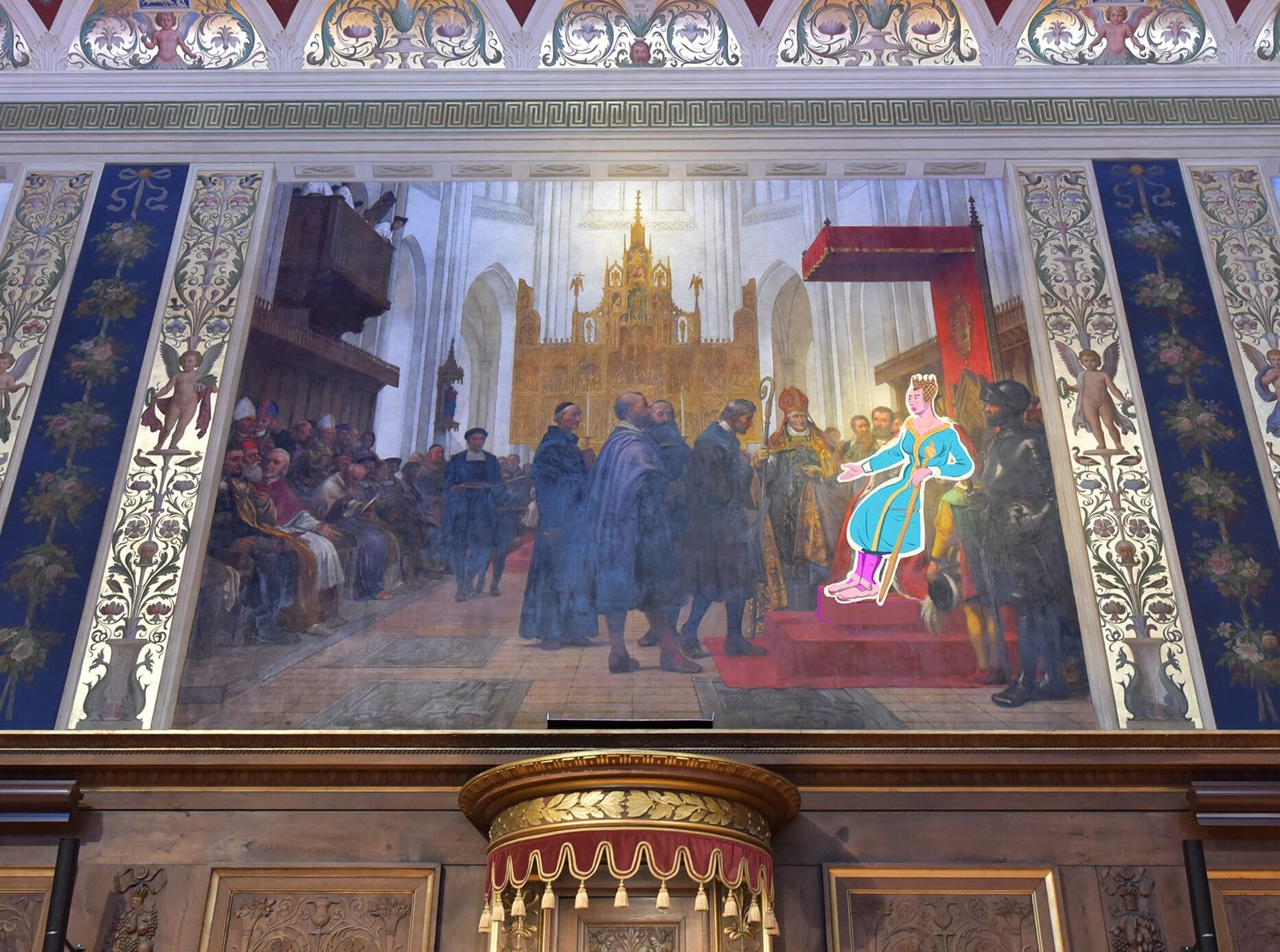 Lie on the wall - On Wilhelm Marstrand's original painting of the inauguration of the university, it is Kong Christian I, who is on the throne. But it was actually Queen Dorothea that made sure there was a university, so we put her on it instead.
image: Christoffer Zieler

Gender equality — Even though the university has known the truth since the year 1900, it has not – before the interview for this article – corrected the story on its website in 2019.

His name is Carsten Jahnke, my supervisor, he is the Saxo Institute’s associate professor in medieval history, and he says in his gravely serious Swedish-German-Danish dialect something that sticks with me the following weeks: »It would be good for us as a university to be scientific with our own history.«

As I stand there on the way out of the door, Carsten Jahnke promises to elaborate on this more at another time. He will send me an anthology, with his own article contribution, called Denmark and Europe in the Middle Ages, c. 1000 – 1525, and after taking a look at the PDF file, I understand the gravity of his aside. The source references are numerous as in any self-respecting historical work, and the anthology itself is nearly 300 pages. The adventure unfolds before my eyes.

They ignored a queen

In the year 1474 King Christian went on a trip to Rome where he, after a series of military defeats and losses at the negotiating table, hoped to regain prestige through a papal visit. The trip was full of pomp and circumstance, and he was already in debt to his queen, Dorothea von Brandenburg, who was waiting for him at home.

From Rome, he brought back a number of , but not the most important ones. It was the intention that King Christian would have asked for a travel altar, permission to eat bacon during fasting, a confession, and absolution from his private priest. He should also have asked for a that would allow the establishment of a university. He brought none of these things home with him.

»We don’t know whether he forgot to ask, but we can see that the trip had a meagre outcome. Minimal, to put it mildly,« says Carsten Jahnke, when I’m back at his office, »he had plenty of court staff that would have been able to record this if it had been a point on the list.«

When the royal couple met up in August 1474, Dorothea started to plan her own trip to Rome. She travelled on the cheap, from family castle to family castle, and her trip cost nothing. Partly because she also stole a number of things on the way. We have private letters from the time, where women complain about her asking to see the best jewellery and dresses and then embezzling them. One of her female courtiers got so drunk she fell down a staircase.

»Dorothea’s travels have a more private character, you could certainly say,« says Carsten Jahnke as he clicks to raise his height adjustable table to the standing position.

Dorothea moved on from her sister the Duchess of Mantua on to Rome, where her nephew, who was a cardinal in Rome, could open doors to the system. He led her to the city limits, and from there on she acted as if she was a poor pilgrim. »This was clever, because in the end this saved her a lot of money. Dorothea was certainly not stupid.«

The granting of privileges was a huge apparatus in Rome. There were a lot of people who did not get their money when the Queen didn’t pay her way. And the cardinal probably did not know that the Queen not only wanted to sort out the private matters that the King didn’t get done.

She also asked for permission to found a university in Denmark.

It is a historiographical tradition to neglect the Danish queens’ and women’s abilities.

From an angry letter to Dorothea’s sister, 18 May 1475, which was published by the historian Johannes Lindbæk in the year 1900, we know that Dorothea requested this bull from the cardinal. And not just that. She also requested to get it for free.

»We have known this letter since the year 1900. We know that Dorothea launched the project, got it through the machinations of Rome and brought back the founding document of the University of Copenhagen to Denmark,« says Carsten Jahnke.

»And what do they do to make people aware of this?« I ask, even though part of the answer has already appeared on the University of Copenhagen website.

He adjusts his glasses and reads up from the website where the university’s history is set out on a timeline. It states that Christian I in 1474-75 set out on a longer journey abroad which included Rome, and that after his return he was granted permission to set up a university in Denmark by Pope Sixtus IV.

»So Dorothea is not mentioned?« I ask, even though the answer is obvious.

»No. And Christian I is already back home in August 1474. You build a bridge over the break between his return and the establishment of the university by writing her out and complete ignoring her. This is a typical feature of writing history.«

»It is a historiographical tradition to completely neglect Danish queens’ and women’s abilities. Dorothea is a clear example of this trend.«

Under her son Hans’ reign, Queen Dorothea was sentenced to  . He wrote her out of history to assure his own prestige. According to Carsten Jahnke, this exclusion continued with the historian Arild Huitfeldt, who is considered one of the fathers of history writing in Denmark, and who apparently did not like Dorothea. She wasn’t mentioned in his history.

»Dorothea has been purged from our historical understanding, and it continues with UCPH. The university’s historians, including the later historians, have found it difficult to square off the break between Christian I’s journey in 1474 and Dorothea’s role in the whole thing. Even when Niels Skyum-Nielsen presented the true history to the university’s 500th anniversary in 1979, it was ignored.«

The lie on the wall

I drink tea with Grethe Jacobsen. She is a former first librarian at the Royal Library and the author of a number of books about women in the Middle Ages. We have sat down at a table in the afternoon sun, between towering bookcases, overflowing with her huge book collection. She helps me navigate through the story of Dorothea. And through the history of the history, no matter how confusing it all sounds.

The students come out with a master’s degree in history and have never heard of women – apart from the unavoidable one, the present Danish Queen Margrethe.

We each take a bite of each of our cardamom croissants.

»I was there, when Niels Skyum-Nielsen presented Dorothea’s story at the 500th anniversary of UCPH in 1979,« she says. »I graduated in the US and was at the first Berkshire Conference on the History of Women. I was at home again in the autumn of ’79 to write on my American PhD. And yes, I heard him there. The speaker on women was a French man. Yes, it wasn’t because the women’s history experts were not familiar with the story of Dorothea already.«

»In history, there has been this complete gender blindness.« Grethe Jacobsen speaks quickly, and I realise that the interview should be taped. I stop her, turn on my recorder and continue.

»No one could stand up to the male historians. And for those of us who did, our protests did not have the same effect as if they were by a professor. The students come out with a master’s degree in history and have never heard of women – apart from the unavoidable one the present Danish Queen Margrethe. If it does not come out at the university, it will not come out in the primary and secondary schools, with the publishers, or in the textbooks.«

»Was Dorothea unusually dynamic, or is she a typical example of a princely woman in the Middle Ages?« I ask.

»She is very typical. The women were used to managing estates. And if they survived childbirth, and the man was not very dominant, they played significant roles. If you just scrap a little bit under the surface, you see all the women. How have people not been able to see it, unless they have closed their eyes?«

»So you think there has been a tendency to neglect the queens’ abilities throughout history?«

»Yes. And this is because the scientific writing of history arose at the same time as the height of bourgeois culture, where women were to stay at home. The subject arose at a historical low point for women in the 19th century. That is why we have this sad historical image of the man out in the world taking care of things, then coming back home tired to the domestic angel who has put the children to bed and who serves delightful food and listens to his concerns. So it’s not because they have deliberately neglected her. They just couldn’t imagine anything else. This is what is so difficult to make a break with,« says Grethe Jacobsen.

I write an email to the University of Copenhagen historian, associate professor Morten Fink-Jensen. He is the man with the key to the website, it is he who can change it.

When he lets me into his office three days later, he says in passing that he, under Carsten Jahnke’s supervision, has changed the information on the website, and adds that it was »written by a former university historian.«

By ignoring her, we make history a forgery.

»There was no particular policy or attitude involved in it. The focus has been on Christian I, because that is what is stated in the papal bull. It states that it was him, and so it is not surprising that they say that it was Christian who took the initiative.«

I go back to Carsten Jahnke with the detail about the papal bull that it is King Christian that is on it.

»We shouldn’t propagate the idea that it is Dorothea that is on ,« he says, »but we need to create a history that we can have in common, and we need to make it multifaceted. I don’t want to replace the king’s role with the queen’s, that would also be wrong. The pope writes, of course, that the king requested it. This is customary at the time. The king is the king and the head of state during this period. But this does not mean that he was the initiator. It just means that he is in the formal role as the founder of the University of Copenhagen. It’s a habit, and it’s not from any evil intent will that we recount this old myth. It is difficult to get married couples into history when we always focus on kings.«

He rounds off the story:

»By ignoring her, we turn history into a forgery. We need to modernise our own self-image. We must, as we do in our everyday lives, see women on equal terms as men in their options. This goes for the University of Copenhagen too. This must be the take home message.«