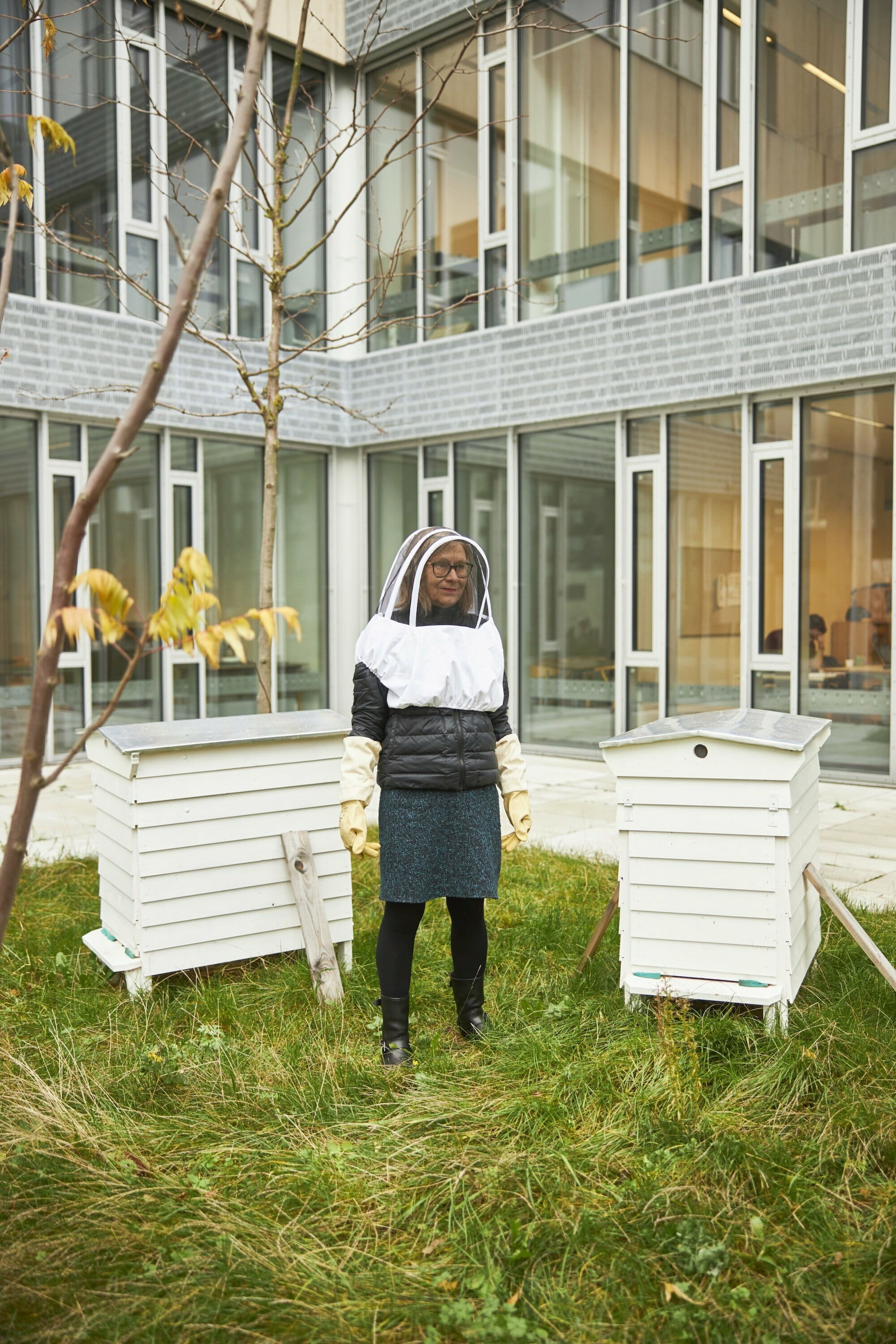 My job — There are two big wooden boxes at South Campus. Each of them has approximately 50,000 bees living inside. Once a week an associate professor of theology collects their honey.

»Did you know that, in the ancient church, honey used to symbolize the resurrection?« Gitte Buch-Hansen asks.

When you talk to her about bees, you quickly end up talking about Aristotle’s views on bees’ sexuality, cave paintings of honey harvesting, and ancient church history.

»The popular explanation for the symbolism of honey is found in the story of Samson in the Old Testament. When he returns to the corpse of a lion he has killed, bees have made a home inside it and started to make honey. At the time, people had the notion that insects came into being in dead animals. So the bees were used as a symbol of the dead body being transformed into something sacred – and honey was seen as the food of the angels and the gods.«

Associate professor and PhD at the Section for Biblical Exegesis at the University of Copenhagen.

Researcher in the New Testament.

She lives alternately in an apartment in Copenhagen and in a house on the island of Falster, where she has a fruit plantation with her own apiary.

Grew up with a couple of grandparents who were also into beekeeping and honey.

Associate Professor Gitte Buch-Hansen’s daily work is on the New Testament at the Section for Biblical Exegesis. In her spare time, she is a beekeeper. In April, she was given the opportunity to bring her hobby to work. Together with a group of students, she set up two beehives on South Campus just outside the Faculty of Theology. Two large wooden boxes with approximately 50,000 bees in each.

The idea came up in a conversation with a colleague, Professor Jakob Skovgaard-Petersen from the Department of Cross-Cultural and Regional Studies. »As a university we want to make our mark in the wider debate over pollination and biodiversity,« says Gitte Buch-Hansen.

There are already bees on the other campuses at university:

»The only place that didn’t have bees was South Campus. So we got started.«

You deserve every sting you get

Gitte Buch-Hansen studied the natural environment around Karen Blixens Plads and South Campus thoroughly. She found more food sources for the bees than she had dared hope for. Hawthorn, linden trees, chestnut trees and dandelions.

»We have been very careful not to set up too many hives, because then the honey bees would threaten the wild bees in the vicinity.«

A permanent team of volunteer students helps Gitte Buch-Hansen inspect the bees once a week. The bees don’t sting, she emphasises, »unless they have a reason to do so. Every time I have been stung, it has been my own fault.«

We are quite proud of it. It is not a kids-variety honey.

The dress code is always called gloves, hats and socks over your trousers. Students found the sock thing hard to accept in the beginning. »They thought it looked ridiculous. But now, they have found out that it looks more ridiculous to have to take off your trousers on campus because a bee has found its way up your trouser leg.«

The two hives have in total produced more than 80 kg of honey this year. This is far beyond what was expected. You can buy a glass of it in a small booth in the canteen at the Faculty of Theology. The taste is strong and spicy, and it is good for cheese and muesli. »We are quite proud of it. It is not a kids-variety honey.«

When Gitte Buch-Hansen recently helped organise an interdisciplinary seminar on the important role played by bees in human life, (honey) gingerbread was served. This was no coincidence:

»The good thing is that people throughout history have been attracted by the sweet stuff. It is perfect to raise awareness about what we are actually doing with our surroundings.«