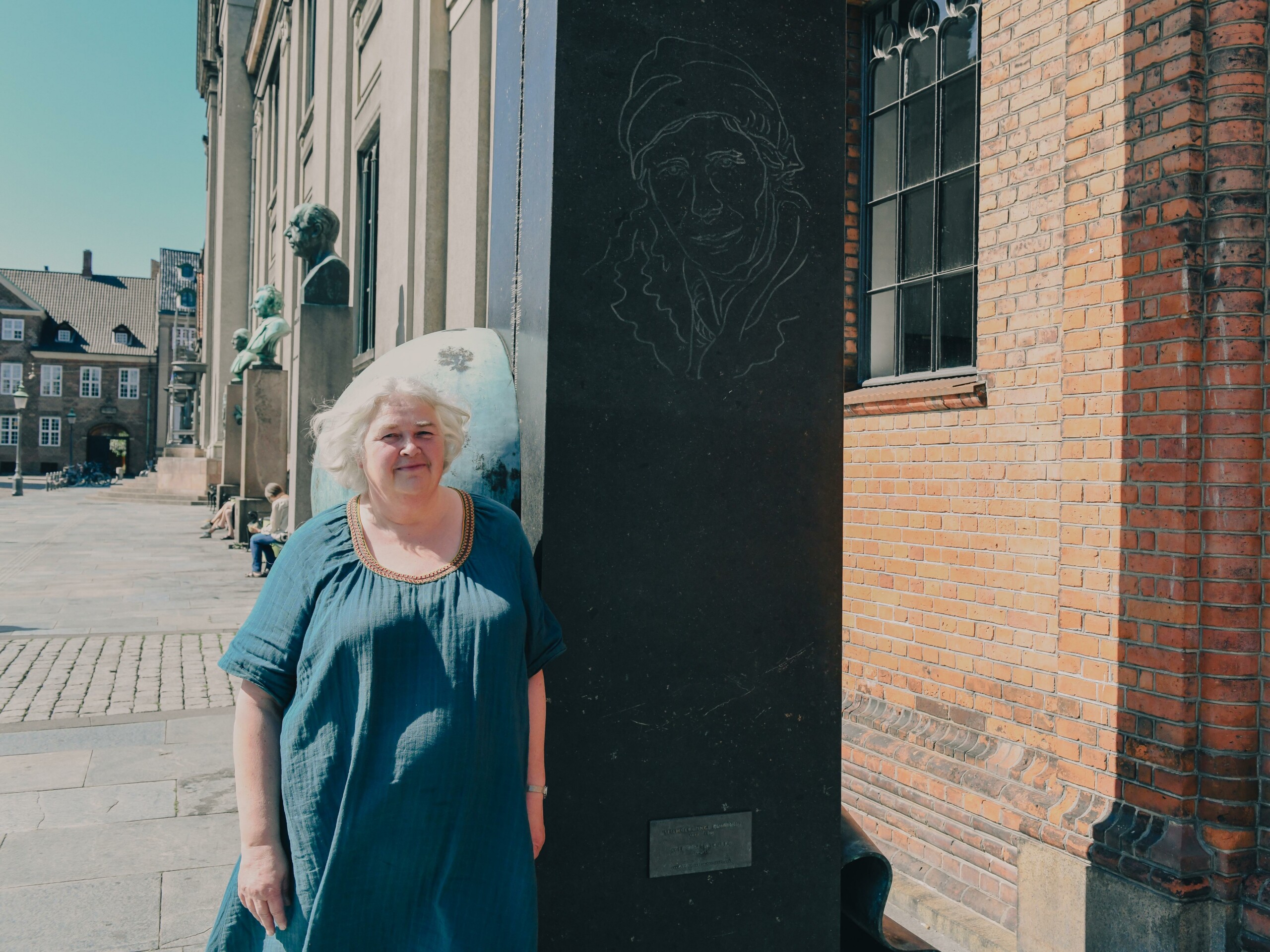 Role models — There are still significantly fewer women at the top of Danish research than men. And if we go back in history, there were even fewer women. But they were there. And they are of great importance to the star scientists of today. We met up with seismologist Trine Dahl-Jensen, who talks about her role model Inge Lehmann.

»It annoys me that she has not had a bust made for her like the others.«

Trine Dahl-Jensen stands there, arms down, peering at the Inge Lehmann memorial sculpture on the central Frue Plads square in Copenhagen.

The square is adorned with bronze busts, depicting the University of Copenhagen’s greatest luminaries. They are all men. On the corner facing Fiolstræde street, right next to Niels Bohr, is Inge Lehmann’s, more cryptic, memorial.

Hardly any passers-by will intuitively link the abstract sculpture to Inge Lehmann, the Danish mathematician and seismologist, who in 1936 discovered that the Earth had an inner core. Unless they are interested in geophysics that is.

Educated at the University of Copenhagen and Cambridge.

Proposed, in 1936, the theory that the Earth has a solid inner core.

Head of the seismological department at the Geodesic Institute from 1928-1953.

On the other hand, people who are interested in geophysics and who recognise Inge Lehmann in the black granite, will wonder about some of the details. Just like Trine Dahl-Jensen:

»There are flaws in the memorial. The monument consists of a column upon which there is a hemisphere. On the flat side of the hemisphere there are a series of lines. These lines look like one of the figures in Inge Lehmann’s renowned publication P’ [referring to the P-wave, ed.], where she presented her thoughts on the inner core of the Earth. But there are mistakes in these lines. Two of them do not make sense from a physics point of view. They don’t fit there at all, but the most important line – the actual P’-line – is missing.«

Trine Dahl-Jensen discovered the error when she was invited to speak in connection with the presentation of the monument in 2017. She is a seismologist and works as a senior researcher at GEUS (the Geological Survey of Denmark and Greenland). In parallel with her academic work, she gives lectures on her scientific role model, Inge Lehmann.

As a young researcher, Trine Dahl-Jensen was given the opportunity to meet her role model when she received Inge Lehmann’s travel grant in 1991. She was the last person to have the scholarship presented to her personally by the then 103 year-old Lehmann:

This meeting made a very big impression on me.

»This was probably the time when she really became my Queen,« she laughs, and describes her impression of the still astute 103-year-old Inge Lehmann:

»This very, very old lady, who was blind and who sat in a wheelchair, had read my application from the start to the end. We had an academic discussion about what was good in it, and what was bad. She came up with suggestions for what she would have done and so on. She was fully aware of what it was all about. This meeting made a very big impression on me.«

What makes Inge Lehmann a good role model from your perspective?

»She was really good at what she did. And she deserves to be world-famous for discovering a key feature of our planet, namely that the Earth has an inner core. These two things.« 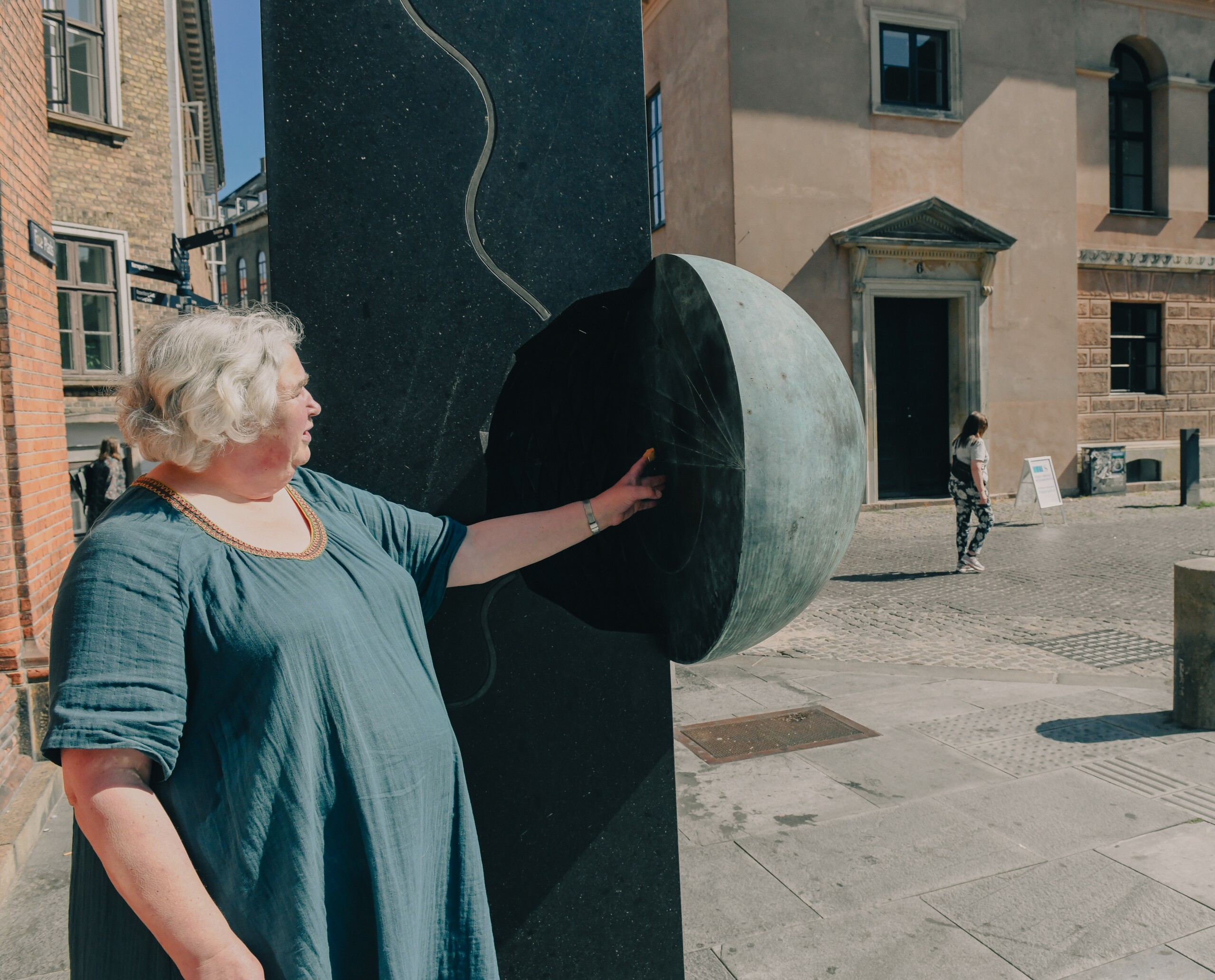 There are errors in the reproduction of Inge Lehmann's famous figure on the back side of the monument, according to Trine Dahl-Jensen.
image: Jonathan Transbøl

Despite the flawed memorial, Trine Dahl-Jensen is pleased that Inge Lehmann is slowly becoming more well-known in Denmark through books, plays, and an upcoming biographical film. Something that she herself has helped push:

»For the past 20 years, I have, as a matter of principle, not held a lecture without introducing my audience to Inge Lehmann. Sometimes just with one slide. But at present I hold lectures specifically about her.«

Why do you uphold that principle?

»It’s important for me to do something to get young women interested in science. The best way to do this is to have a good role model. Inge Lehmann is a brilliant example, I think. And this fits into my own work on earthquakes.«

It’s important for me to do something to get young women interested in science.

In her own time, Inge Lehmann was mostly only recognised abroad. In the US during the Cold War, use was made of her unique ability to interpret underground tremors. It helped estimate the strength and position of the Soviet Union’s nuclear tests.

She was not recognised among peers in Denmark. Inge Lehmann, for example, was never offered membership in the Royal Danish Academy of Sciences and Letters despite a long career as head of the Geodesic Institute and many international honours, according to Trine Dahl-Jensen:

»Her colleagues abroad, including the geophysicist Harold Jeffreys, urged the Danish Academy of Sciences and Letters to accept her as member. They did not. They gave her a gold medal, but she never became a member.«

Drop out from academic food chain

Trine Dahl-Jensen is a keen lecturer and supervisor of bachelor’s, master’s and PhD students, and she hopes to help pave the way for the next generation of researchers. But she emphasises that the task of offsetting gender inequality among top scientists cannot just be solved by having good role models:

»I think that the schism between men and women is at a different place today than in Inge Lehmann’s day. There was a widespread perception back then that too much studying would make women infertile,« says Trine Dahl-Jensen rolling her eyes and with a crooked smile.

»You can see today that in the graduate ‘food chain’ [in Denmark, ed.],there is virtually parity between men and women among PhD students and assistant professors. This has been the case for 20 years. But there is still a predominance of men among permanently hired scientists.«

Equality between men and women at the lower levels in the world of research, apparently needs more than time to reach the top levels:

»They continue to say that we need time for them to work up through the system, but this just does not work. It is not happening. The statistics have not changed. We are currently less than 30 per cent women among permanently hired senior researchers at the Geological Survey of Denmark and Greenland (GEUS). I think the best thing you can do is to be there yourself and to encourage others to apply for permanent positions.«

You can see Trine Dahl-Jensen and other female researchers talk about their female role models from the history of research under the title ‘My Queen’ in connection with the cultural festival Golden Days in Copenhagen, The events are free and take place at Café Europa.