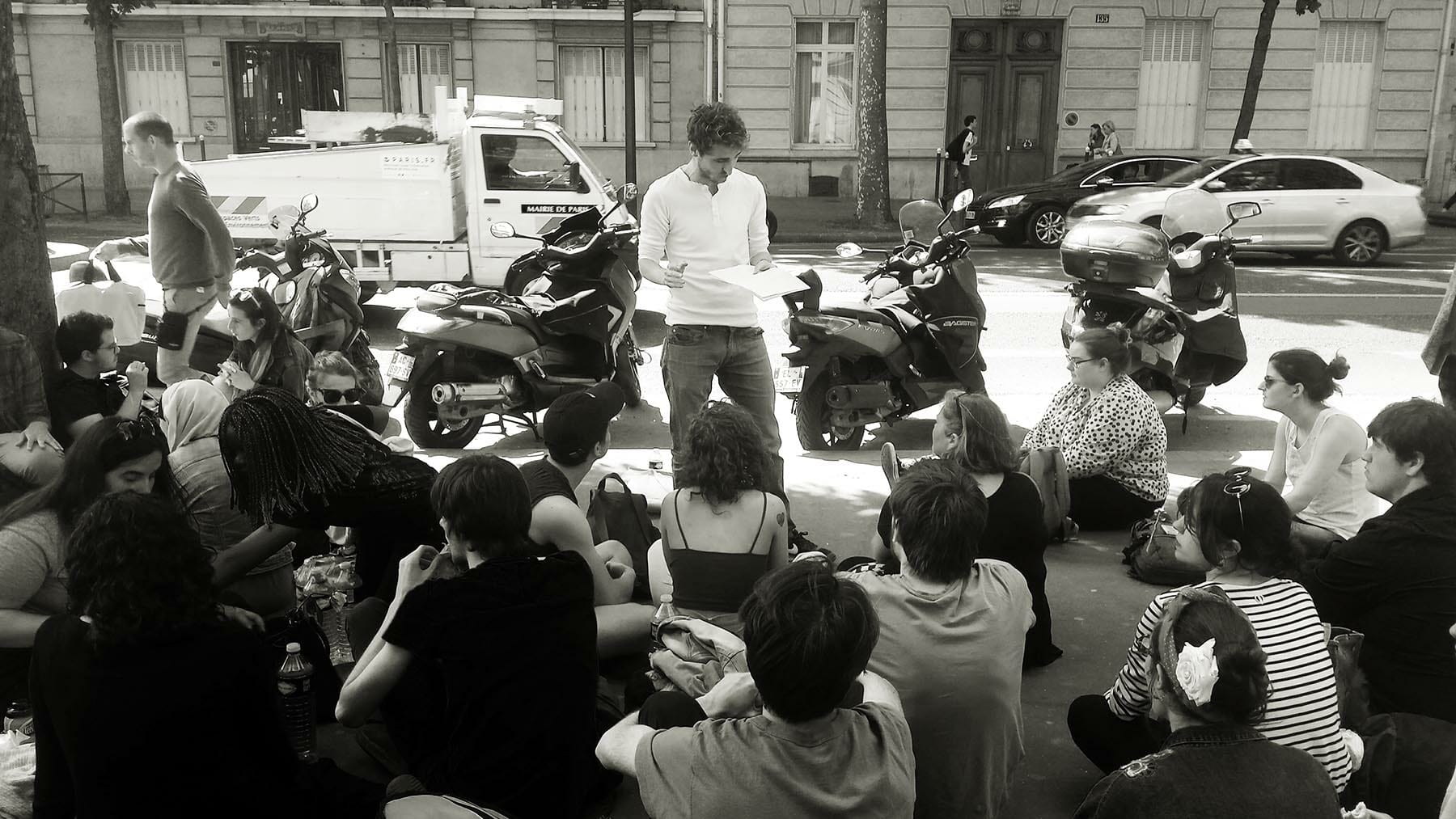 Lecture - The photo is from Sorbonne one day at the end of May, when instructors had to lecture on the street. Management had shut down the university in response to the students' blockade. In the middle is Matthias Dressler-Bredsdorff.
image: Frédérique Harry, lektor ved Sorbonne

Student rebellion — French police have the rectors’ permission to use tear gas when students demonstrate. Danish associate professor who teaches at the Sorbonne in Paris is appalled with the situation.

France is known for its large demonstrations which may seem dramatic by Danish standards. This summer has had the country’s universities ravaged by strikes, blockades and demonstrations to an extent not seen for a long time.

Up to 70 per cent of French universities have been occupied by students since President Emmanuel Macron began reforming the universities’ admissions process.

I had to go into a room and hold the exam which was planned for my students, even though they had been gassed and beaten by the police minutes earlier

Danish Matthias Dressler-Bredsdorff holds a Master in comparative literature from the University of Copenhagen in 2016. He has now experienced at close quarters the student strike for almost two months at Sorbonne University, where he teaches as associate professor in Danish at the Scandinavian Institute.

It has affected the practical activities of his working day – and his understanding of what the university is as an institution.

Police, politicians and, not least, the managements of many French universities have fought back against the students in a manner which Matthias Dressler-Bredsdorff with his Danish background had not expected.

Matthias Dressler-Bredsdorff was to hold an exam for his students a few weeks ago. But a surreal sequence of events unfolded, he says:

Until now there has been free admission to a large part of the French university system. This will now be changed.

The universities management teams began implementing the law even before it had been adopted as the official admission requirement for the start of studies in 2018.

“I showed up for work at the Sorbonne for several days in a row, where the first people I met were students who had been tear gassed and beaten by the police at the entrance. I had to go through a chain of French police, who needed to check my identity, and when they had released me, employees from the university administration checked me again,” he says.

The university then wanted him to hold his exam for his students under these exceptional circumstances:

“I had to go into a lecture hall and hold the exam which was planned for my students, even though they had been gassed and beaten by the police minutes earlier”. Management felt that the conditions were acceptable for an exam, and this has been shocking for us to experience,” says Matthias Dressler-Bredsdorff.

He believes that the events this spring at the universities should be seen in a larger context: After the many terrorist attacks in France in recent years, safety has been the major issue.

“There is a need for security, but for whom? They turn the fear of terrorist attacks into an instrument to smother all political debate. The universities have already stated that they have had to close the universities due to ‘external hazards’. This was their argument for closing the Sorbonne for a month, but who are the external hazards? It must be the students,” he says.

“It is with this excuse that the universities’ managements say they have to close the university by means of the police,” says Matthias Dressler-Bredsdorff.

Professors are threatened with discipline

Matthias Dressler-Bredsdorff says that he considered it “disgusting” to have to go through police barriers to get to his job:

“I refused to hold the exams. And together with my colleagues here at the Scandinavian Institute, we have all refused to hold exams under police surveillance. I have also started a petition at the Sorbonne in order to put pressure on the Dean and Rector, because we cannot work under these conditions.”

Several professors have already been threatened with disciplinary proceedings if they don’t stop misbehaving and doing what the Office of the Dean says. The working environment has broken down

Matthias Dressler-Bredsdorff is not specifically concerned about his own future – all of his colleagues are in an unusual situation, he says:

“As a consequence of all this, many are now starting to join unions because they can see that management has no other interest than that of the government’s. Several professors have already been threatened with disciplinary proceedings if they don’t stop misbehaving and doing what the Office of the Dean says. The working environment has broken down,” says Matthias Dressler-Bredsdorff.

Video of the clashes between students and police using tear gas in front of the Sorbonne on 29th May recorded by one of Matthias Dressler-Bredsdorffs students.

Even though the situation on the French universities is tense this summer, the demonstrations will have no influence on Macron’s reforms. This is according to Jørn Boisen, Head of Department at the Department of English, Germanic and Romance Studies (Engerom) at the University of Copenhagen, who has in-depth knowledge of France.

“If you experience it from the inside, it seems severe. But from the outside it’s just a tiny ripple. The demonstrations and the unrest will not have any real political or sociological significance. The university reform is one among many French reforms, and most people can see that the reforms are necessary. And the universities’ situation is untenable,” says Jørn Boisen.

If you experience it from the inside, it seems severe. But from the outside it’s just a tiny ripple.

The French university system is characterised by having some . On the other hand, there have been (until this year) free admission to everyone with an upper secondary school exam to the other universities. The dropout rate on the programmes have, however, on the first year remained stable at just below 50 per cent.

But it is only in theory that admissions have been free, explains Jørn Boisen, as at the most popular study programmes, like psychology for example, there is simply no room for all those who have been admitted. So in 2017 they had to resort to drawing lots. And everyone in the university field can see that having this pure randomness is untenable,” he says.

The protesters are in the minority at French universities

The French universities have been chronically under-funded for many years, even though the student intake has been booming. And demonstrations will not have any impact on Macron’s willingness to change the universities’ admissions system, Jørn Boisen reckons.

“My feeling is that the students’ demonstrations have started as they now have a pretext that they previously lacked. It is typically the students who are inside the university that have objected to the reforms, and not those who will be affected by the reforms in the future. It is a clear minority – and often together with people who are not enrolled – which has set off some actions that have affected many other students who have had their exams cancelled or postponed at a number of major universities, even though the movement has fallen flat,” says Jørn Boisen.

It has turned out, according to Jørn Boisen, that 70 per cent of students at the 20 largest universities in France which have been occupied this spring, are in fact against the actions.

Jørn Boisen describes the movement behind the demonstrations as ‘ultraminoritarian’ with many unclear aims mixed together, and including everything from resistance to nuclear power to protests against Israel, railway reforms and people who eat meat.

Seen from Matthias Dressler-Bredsdorffs desk at the Sorbonne, the picture is another.

He mentions one of his students, Alexander, who has taken a technical secondary school exam, but who nevertheless has started an academic education at the Sorbonne in the Danish programme, where he, according to Matthias Dressler-Bredsdorff, is doing very well.

Macron’s new admission criteria do not only apply to grades. The student must also write an ‘application letter’ (lettre de candidature).

In addition, the universities from 2018 will be able to see the applicant’s name and place of education. Critics fear it may lead to discrimination.

“Alexander is not fighting for his own rights. He is fighting in solidarity with others, so that future students can get the same opportunity as he had to pursue their dreams,” says Matthias Dressler-Bredsdorff. But he agrees with Jørn Boisen in saying that the students are unlikely to have got anything out of their protests when the summer holidays are over.

He recognises, however, the students’ courage.

“It is very difficult to say how many people are against the reforms, as those who turn up are those that are prepared to be met by state violence – and this takes courage. There are certainly many students who support Macron’s law. But I can see, also here at the Scandinavian Institute, that when the students see how the state and their own university responds with violence to their democratic right to demonstrate, then they turn around and “okay, there is something here that is not right,” says Matthias Dressler-Bredsdorff.

Iron fist in a velvet glove

Matthias Dressler-Bredsdorff says that the incidents of this spring have got him thinking:

“When you peel away all the humanist lingo from the universities, what is the university actually? In this exceptional situation, it has been clear to everyone – and certainly to the students – that if there is one group of people that universities don’t care about, it is students. Why else would they administratively shut down the university for a month?” he says and continues:

… if there is one group of people that universities don’t care about, it is students.

“If, however, there is one thing universities believe in, it is that students can get their exam certificates so they can move on. All this about the university being a place for conversation and debate. This is something we just say,” says Matthias Dressler-Bredsdorff.

“The situation reveals that when it comes down to it, the university is a state institution, which has one central role. And that is to get people through the system as fast as possible and with no fuss. At the same time, we have a small generation of university students who feel that society is treating them as if they are criminals. This means that they lose confidence in society’s institutions and in the older generation. This is dangerous and makes for a cynicism that serves no purpose for anyone,” says Matthias Dressler-Bredsdorff.