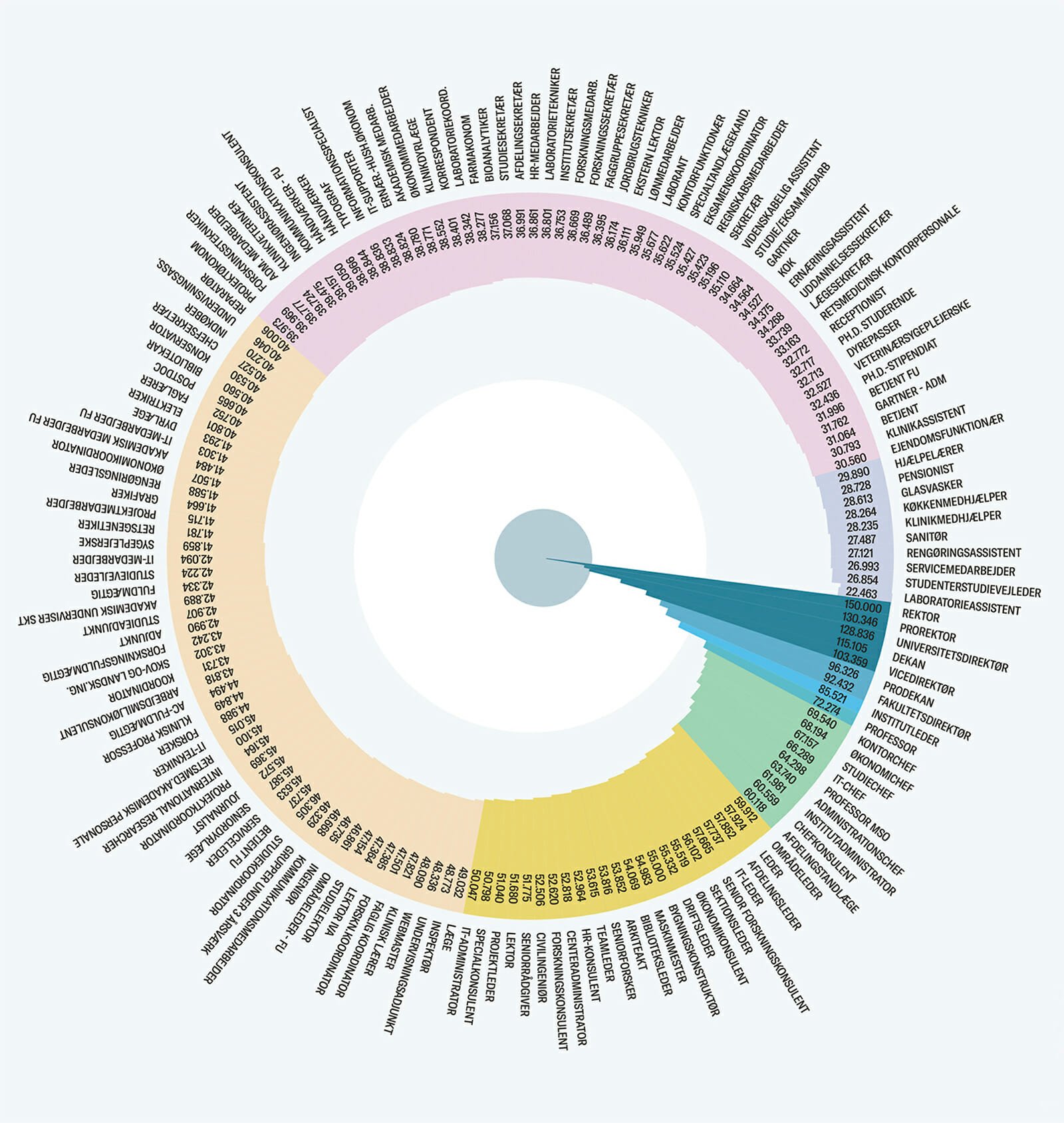 Wage developments — At the University of Copenhagen, employees with ‘manager’ job titles have, on average, received a significantly higher percentage wage increase than other employees. This can be seen in a calculation by the University Post on the basis of figures from Lønoverblik.dk. UCPH says the calculation is misleading.

The gap between employees with ‘managing’ in their job title and other employees at the University of Copenhagen (UCPH) has grown in recent years.

This is how we did it

This is according to the University Post’s calculation based on figures from the website Lønoverblik.dk, which in turn is based on the actual wages paid to employees of the state – including the University of Copenhagen.

In addition to the 155 with a manager job title, which the University Post has found on lønoverblik.dk, there are UCPH employees who are managers with personnel responsibilities (like research group managers) that have a job title of, say, associate professor or professor. It has not been possible to identify them, as this would require a review of the employment contract of each individual employee.

The average figures cover large individual differences between managers and between staff groups.

Among other employee groups, it is the building engineers, project staff, and communication staff that have got largest pay increases into their bank account.

Morten Bæk, chairman of the Danish lawyers ‘ and economists ‘ association (DJØF), writes in an e-mail reply that this kind of pay calculation is always interesting, but that you have to be careful in taking the figures at face value.

“The trend from 2011 to 2017 does not show whether there have been age shifts in the staff group, where older workers have left university because of retirement or voluntary redundancy. “This may well be the case at the University of Copenhagen, which has been through several rounds of cuts,” he writes.

But the increases in the managers’ salaries at UCPH matches the rest of the public sector, reckons Henning Jørgensen, professor at the Centre for Labour Market Research at Aalborg University.

The managers have received wage increases that are out of step with the public sector labour market, he says.

“The top managers are creaming off their salary increases, while the lower ranks suffer from tough work pressure. Administrative and strategic management functions are now remunerated at a level that is an affront to many lower ranking employees, the labour market researcher says.

In the AC club we believe that openness on wages makes for greater transparency and more fairness in the distribution of salaries.

A study carried out by the Ugebrevet A4 magazine in 2015 shows that managing directors outside the public sector have received high salary increases.

The 22 permanent secretaries in government have had a 39 per cent increase in salary from 2006 to 2015, so they now get DKK 1,873,150 a year on average. This is according to figures from the The Agency for the Modernisation of the Public Sector in Ugebrevet A4.

Henning Jørgensen believes that the increase in salaries testifies to the “self-overvaluation” of many public sector executives. He cannot see the reasons why their work should trigger higher wage increases than ordinary employees.

“University managers work hard and are extremely competent. But they have always been. The previous rectors, deans and department heads were also skilled and worked hard without getting this much pay for it,” Henning Jørgensen says.

He thinks that the problem is that the public sector managers have started to compare themselves to their colleagues in the private sector.

The salaries need to be competitive in the public sector to keep and attract talented managers, the argument goes. But according to the labour market researcher, there are hardly any managers that switch between the two sectors.

Bent Greve, a professor of social sciences at Roskilde University, says the same thing in an article in Zetland from 2017 about the increasing salaries of department heads:

“This is a strange type of logic, as there is not much exchange between the public and private sectors at management level,” he says.

Everyone should be able to have a salary increase

Signe Møller Johansen, staff representative for technical-administrative (TAP) staff of the AC union at the university, does not wish to comment on specific salary numbers. But she says that, as a starting point, there should be an equal opportunity for all staff groups at UCPH to achieve wage increases:

“It is unfortunate if some groups – that is managers – have a significantly better opportunity to achieve this than others.”

According to Signe Møller Johansen, are most concerned with ensuring that UCPH complies with its own remuneration policy. In particular with ensuring that employees with comparable functions and qualifications are treated equally, but also that what is needed for a salary increase is transparent.

“In the AC club we believe that openness on wages makes for greater transparency and more fairness in the distribution of salaries. It is important that this is used as a lever to lift those that are at a low level, rather than chastising those who are at a high level,” she says.

Salary pools are too small

Signe Møller Johansen adds that the staff representatives often find that too little is set aside for fixed supplementary salary in the annual wage negotiations.

It varies from faculty to faculty, but generally there is more money for one-off remunerations, and this can mean that experienced employees with a good deal of UCPH experience have stagnating salaries, she thinks.

“I don’t know if the same goes for managers, but I sometimes think it’s crazy that good colleagues have to change jobs to get a pay raise. When you then have to recruit a replacement, you often have to pay more to attract the right skills. It has been like this in all the years that I have negotiated salary as a union staff representative,” she says.

It is 'normal practice' that the higher up in the hierarchy you are, the more supplementary salary is achieved, and perhaps this also happens more frequently.

Tina Wandall, staff representative for biomedical technicians at UCPH, also finds that little funding has been put aside for salary improvements for employees in many places at the university. For her own profession there are sometimes no funds and generally only between 0.3 and 0.5 percent of payroll.

In addition, wage increases are agreed upon in collective bargaining between the state and the trade unions. Most recently, the state employees received general salary increases of 0.50% in 2015, 0.80% in 2016 and 3.20 per cent in 2017.

She says that average salary numbers will be influenced by staff substitutions when, say, an older ‘expensive’ employee leaves UCPH and a younger ‘cheaper’ employee comes in. But there is typically not a particularly large replacement among managers.

“It is ‘normal practice’ that the higher up in the hierarchy you are, the more supplementary salary is achieved, and perhaps this also happens more frequently. At UCPH, just as in the wider community, there are differences between higher and lower paid, so part of the difference in wage developments is only natural and predictable,” says Tina Wandall.

She adds that she is more surprised that wage developments among ‘non-managers’ has been so unnaturally low in total. This makes you wonder why and whether this corresponds to developments in other parts of the public sector.

Associate Professor Thomas Vilstrup Pedersen, staff representative for scientific staff at UCPH, points out that it is not possible to deduce anything about individual salaries from the data – only from the trend in average salaries for employee groups. There are hardly many people, for example, who were employed as a postdoc both in 2011 and 2017, he points out.

The overall average will also be affected by changes in the size of groups of employees. And you can’t see from the figures, what happens in terms of salary when, for example, an associate professor is hired as a professor with a corresponding salary increase.

“For the above reasons, we need to be wary of drawing hard conclusions from the salary numbers. But as a starting point I believe that every employee group should have the possibility of a reasonably similar wage increase,” says Thomas Vilstrup Pedersen.

Djøf: Do not take the numbers at face value

Morten Bæk, chairman for the public managers section the Djøf trade union, says that in the University Post salary data, the number of managers has fallen in the period. So it may well be possible that the wage increases correspond to more responsibilities in each position. And it is not clear whether structural changes at the university may be of significance.

“We often see statements of wage developments for public managers, which do not take into account the fact that there may have been changes in the form of recruitment, so that you may have hired managers in a time-limited fixed-term position, which is a more costly way to recruit than other forms of employment, but which in turn gives greater momentum in the mobility of managers,” the chairman of the public managers at Djøf says.

He adds that it is Djøf’s position that it is up to the individual employer to offer an attractive employment package. Here, of course, both salaries and the possibility of one-off remunerations are included for both managers and employees.

“I do not have the opportunity to assess the specific way in which this is put into practice at the University of Copenhagen, but it is always a good idea to have salary policies and principles discussed among management and employees at the workplace to ensure transparency in wage developments,” says Morten Bæk.

UCPH: Management does not recognise the numbers