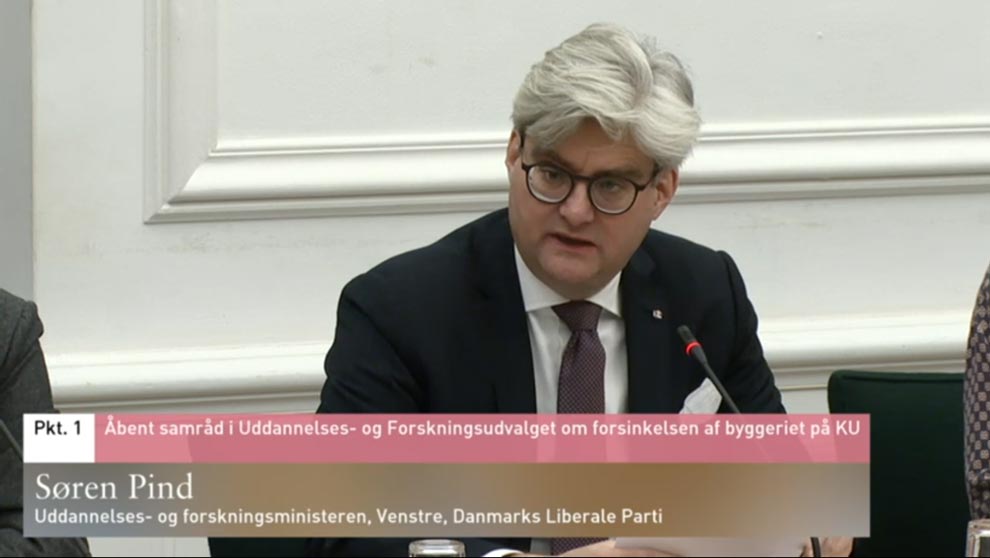 Parliamentary consultations — The University of Copenhagen is likely to have to pay a substantial rent increase on the Niels Bohr Building from government after construction delays and a cost overrun of at least DKK 1.3 billion. Minister for Higher Education and Research Søren Pind will not guarantee that the university will not have extra costs.

It never came. A guarantee from the Minister for Higher Education and Research Søren Pind, that the University of Copenhagen (UCPH) will not be left with the extra bill for the Niels Bohr Building which was originally budgeted to DKK 1.6 billion. According to auditors Ernst & Young it will cost an additional DKK 1.3 billion to complete.

Since the University of Copenhagen is to lease the building from the state, higher construction costs will lead to the university paying a higher rent than originally planned.

I am preoccupied with making sure that this case has as few negative consequences for UCPH as possible.

Social Democrat Mette Reissmann had therefore called Pind in for a parliamentary consultation 19th December on the scandal-ridden construction project. A project that had already had the Danish Building and Property Agency being deprived of its control of government construction projects and the director of the agency being dismissed.

Mette Reissmann wanted answers to questions like who would take on the cost of moving, how the minister would remedy the negative consequences of the delay, and how the Niels Bohr Institute – including the  – could maintain quality in research and education if UCPH was to take on the additional costs from their own budget.

The bill has to be made up first

Søren Pind replied that this is an unfortunate case that he is very concerned with, but that the damage has already occurred. The construction will be delayed and will be much more expensive than planned.

“We will only know the precise practical and financial consequences when the Danish Building and Property Agency and the University of Copenhagen have calculated the costs of construction and other costs as a consequence of the delay,” said Søren Pind, adding:

“I would like to say that I sympathize with the views of UCPH. And you can choose to listen to what I am saying now, that I consider it important that the university’s resources go to education and research.”

Mette Reissmann wanted to know if this means that Søren Pind wants to ensure that UCPH does not get a rent increase?

“I am preoccupied with making sure that this case has as few negative consequences for UCPH as possible. The problem is, we should avoid avoiding a rent increase for UCPH, and this is what UCPH itself has taken up in its discussions with the property agency,” the minister said, but he would not, however give a guarantee.

“I cannot. But I will guarantee that I will follow the matter closely,” he said.

Mette Reissmann then asked if the case prompted the minister to consider changing  , which means that state institutions pay rent on market-like terms.

“The situation is that the more expensive a construction becomes, the higher the government income in the form of higher rent. Will the minister take initiative in ensuring that one authority does not have to pay the entire bill when another authority makes the mistakes?” she asked.

Søren Pind admitted that the current case of the Niels Bohr Building reveals some of the weaknesses of the SEA scheme.

“I have found that the current model is not appropriate, and we are therefore working on a new model. But this is not something the government has decided on yet, so I cannot say more about it now. It is too early to state clearly in which direction we are going, but I think that all parties in parliament feel it is their responsibility that the funds allocated for research and education also go to research and education, and not to a speculative model where the rent ends up playing such an important role as we can see here,” the minister said.

Søren Pind’s party colleague Bertel Haarder then asked whether the case makes the minister want to “fulfill the wish of UCPH to take over freehold ownership of their buildings like other institutions?”

Pind said these were “exciting and constructive thoughts” and said that the signals from the Liberal Party’s parliamentary group would be included in further work.

Mette Reissmann believed that this was a 180 degree about-turn on the question from the Liberal Party.

“Your predecessor Esben Lunde Larsen clearly stated that this was not something you wanted from government when he was minister and had to consider freehold ownership,” she said.

“If we make a level-headed conclusion to this case, it must give rise to considering whether the present structure we work on is the right one, or if there are other models where you can better link the relationship between money and responsibility,” Søren Pind responded.