University of Copenhagen history: The fire of 1728 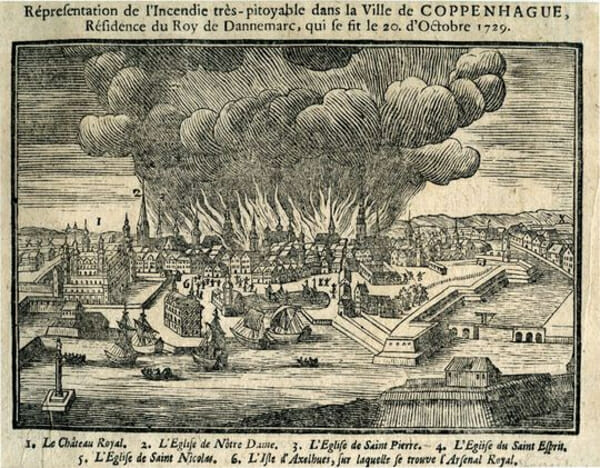 French newspaper illustration. The text states: "Rendering of the terrible event in the city of Copenhagen, the home city of the Danish King, that burnt down on 20th October 1729.” (The newspaper misstated the year - the fire was actually 20th October 1728).
image: Københavns Museums billedarkiv

20th October — 290 years ago, all of the University of Copenhagen buildings burnt down, including the university library with all its books. For the university, this is still significant.

The year is 1728, the date is the 20th October. In the evening a house bursts into flames. Nobody knows what started it. Maybe a child dropped a candle up in the loft. Perhaps the parents just said this to shift the blame.

The house was approximately where the Strøget pedestrian street exits on to the town hall square Rådhuspladsen. About where the Politikens Hus is today. And because of a strong southwesterly autumn wind the flames and the sparks easily spread in what turned out to be the largest fire in the history of Copenhagen. A fire which was also significant for the University of Copenhagen.

In the medieval streets of Copenhagen panic slowly began to spread. It was dark, but the flames lighted everything up. The flames were blown towards the Larsbjørnsstræde, Studiestræde and Sankt Peders Stræde streets. The city’s residents left their homes, and many of them took their stuff with them to the churches. The churches couldn’t burn – they thought.

Disaster at the Church of Our Lady

The authorities have no control over the situation. Also the panic spreads here too. The firefighters had a fire drill earlier in the day. After practicing putting out the fires, they decided to slake their thirst. Many of the firefighters were drunk. The fire wagons could not traverse through, or turn, in the city’s narrow streets. The fire spreads throughout the night, with the sparks being carried by the wind and starting new fires elsewhere in the city. From exhaustion, early in the morning, the chief of police opts to do the same as the firefighters had done. He gets drunk.

In the morning, the fire reached one of the critical points: The Church of Our Lady Vor Frue Kirke. Hoping to stop the fire, the authorities set off an operation which, in hindsight, might seem unfortunate: The demolition of a number of buildings. Some believe that the sparks from the blast land on the Church of Our Lady, which is ignited. The people’s belongings are incinerated with the church. The spire falls to the ground. The church collapses.

The fire sets the university back many years – all the books were gone! [...] They actually discussed plans to move UCPH completely out of town to rebuild it. In fact, to Viborg in Jutland.

In Salmonsen’s Encyclopedia, 2nd version, the circumstances of the fire are described like this:

“There was a storm blowing from the southwest. There was a lack of water due to the laying of new main gutters. And the firefighters, after testing the hoses on the same day, were intoxicated. The superior firefighting officers were inebriated, and the chief of police in the morning so overwhelmed by the events that he went home and got himself drunk.”

The right wind conditions and the mismanagement of the authorities had the fire developing into the largest in the history of Copenhagen.

The flames reach the University of Copenhagen

It is the flames from the Church of our Lady that then take a hold of the University of Copenhagen. In 1728, all the university premises are around the square on Frue Plads. The entire University of Copenhagen burns down. Some exterior walls survive (and can still be seen standing today), but all the interiors are burnt to a cinder. And a university is not only its buildings, but in particular everything that is inside. The only building that escaped the flames, was the Consistorium konsistoriehuset that still exists today – perhaps the oldest building in Copenhagen.

In the street Store Kannikestræde, right next to the Church of Our Lady and the rest of the university buildings, almost all the university’s professors lived. And all their homes disappeared in one row. So did their notes, records and manuscripts – not to mention their private collections. One third of Copenhagen (marked in yellow on the map), about 1,500 properties, were burnt down in 1728. Image: Copenhagen city archives
image: Københavns Stadsarkiv

The flames moved steadily onwards towards the next church: The Trinitatis Church at the Round Tower was in flames by the afternoon of 21st October. The ceiling of the Trinitatis Church was the location of the University Library. About 35,000 volumes. Everything from handwritten manuscripts, research papers, journals, Icelandic sagas – and a lot we don’t know anything about. After the church has been on fire for several hours the ceiling breaks down. 35,000 books disappear in the inferno. And with them a systematic collection of historical knowledge.

When the University Post meets up with Morten Fink-Jensen, who is an associate professor in history at the University of Copenhagen, it is under different conditions, on South Campus. University professors no longer live in a long row at the university, the buildings on Njalsgade street are fireproof, fire fighters don’t get drunk after exercises, neither does the chief of police. And we now know that churches can burn too.

But back then, in 1728, they knew something we don’t know now – and will never know.

What we do not know

After Morten Fink-Jensen has reviewed the story of the fire in 1728, he starts to talk about what was lost. And for a researcher this is a slightly painful conversation. Among the 35,000 volumes consumed in the fire, there were thousands of historical sources we will never see again. “We don’t even know what it is, we don’t know,” as Morten Fink-Jensen puts it.

What was in the university library in 1728?

“There has been everything from some of the first printed versions of Aristotle’s works, to Danish-produced literature. They had an incredibly valuable collection of scientific literature, and these books date back to the end of the 15th century. Some of the oldest printed books. And by all accounts there have been quite a few unique items which were only printed in one copy. Copies that no longer exist.”

It is here that it really starts to get painful. Thousands of books that no longer exist. Copies of what we do not even know we don’t know. Morten Fink-Jensen continues:

“There were large collections of handwritten manuscripts. This is what we traditionally, in the research, have agreed upon as being the biggest disaster. Even though it was terrible that many books burned, then there was not in this way a loss of knowledge. Aristotle’s works were also in other libraries. But it is the handwritten manuscripts, which have included things that are not found anywhere else.”

So what has been the significance of the fire for historical writing today?

“In terms of the Middle Ages, and for the 15th-16th century, an incredible number of sources have disappeared. This means that there are some large gaps in our knowledge. With the books we have lost an important part of history. It’s not only what is written on the pages, but also the books and the manuscripts as objects have been lost.”

This is actually completely insane: The day before the fire broke out, they had transferred the archive of the Diocese of Roskilde to the university library. The day before.

“But there are many other things about the city of Copenhagen, which we do not know anything about, as the archive in the Town Hall burned down. And this is actually completely insane: The day before the fire broke out, they had transferred the archive of the Diocese of Roskilde to the university library. The day before. This means that when you as a historian today work on Danish history before 1728, you are in many ways extremely poorly informed about Copenhagen’s and the island of Zealand’s history.”

But it doesn’t stop here. When the fire takes hold of the observatory on the top of the Round Tower (which didn’t burn down), an object disappears that Morten Fink-Jensen may have wanted to save from the fire the most: Tycho Brahe’s celestial globe, which was built in 1570. The globe in Brahe’s celestial globe was made of wood, clad in brass, had a diameter of 150 centimetres and had more than 1,000 fixed stars marked on it. It was the first celestial globe in history. “I guess it could almost roll down the spiral equestrian staircase in the Round Tower,” continues Morten Fink-Jensen.

The question of what he would most prefer to have rescued from the fire gets a prompt reply:

“Some of the handwritten manuscripts related to Danish history. I am simply curious to know what it is that we do not know today.”

The University of Copenhagen in Viborg?

It is inevitable that such a large loss of knowledge leaves its mark. With 35,000 volumes in the university library, and as many in the professors’ residences, it was almost all the books in all of Copenhagen that disappeared in two days in 1728. And this put the University of Copenhagen in a bit of a spot, says Morten Fink-Jensen:

“This put the university back many years – the books were gone! The university found it hard to function for many years after the fire. All of its buildings except the Consistorium building were burnt down. They actually also discussed plans to move it completely out of town and rebuild it. In fact, in Viborg in Jutland.

“Yes. But it came to nothing.” Tycho Brahe's celestial globe went up in flames, when the Round Tower caught fire. It is perhaps one object that university historian Morten Fink-Jensen would like to have saved from the fire. Image: The Royal Library
image: Det Kongelige Bibliotek

“Copenhagen was in many ways modernised after the fire. Just because there was so much that disappeared of what was ancient and medieval. That large parts of the inner city have the feel of the 1700s is a consequence of the fire.”

There was not much that escaped the flames. Morten Fink-Jensen tallies the damage:

“More than a third of the town was burnt down. About 1500 properties. The large churches, the town hall and the university were all burnt down. The main part of the medieval town was consumed in the flames. Almost all the books in Copenhagen were incinerated. But some things were saved. Many of the Icelandic handwritten manuscripts, which are today to be seen at the Arnamagnaean Institute, were saved because Árni Magnússon, who was professor and lived in Store Kannikestræde, managed to get the manuscripts out in time.”

The manuscripts can still be seen today. Posterity can thank Árni Magnússon for saving this invaluable knowledge. But in many other ways, we are now left with not knowing what it is that we do not know.