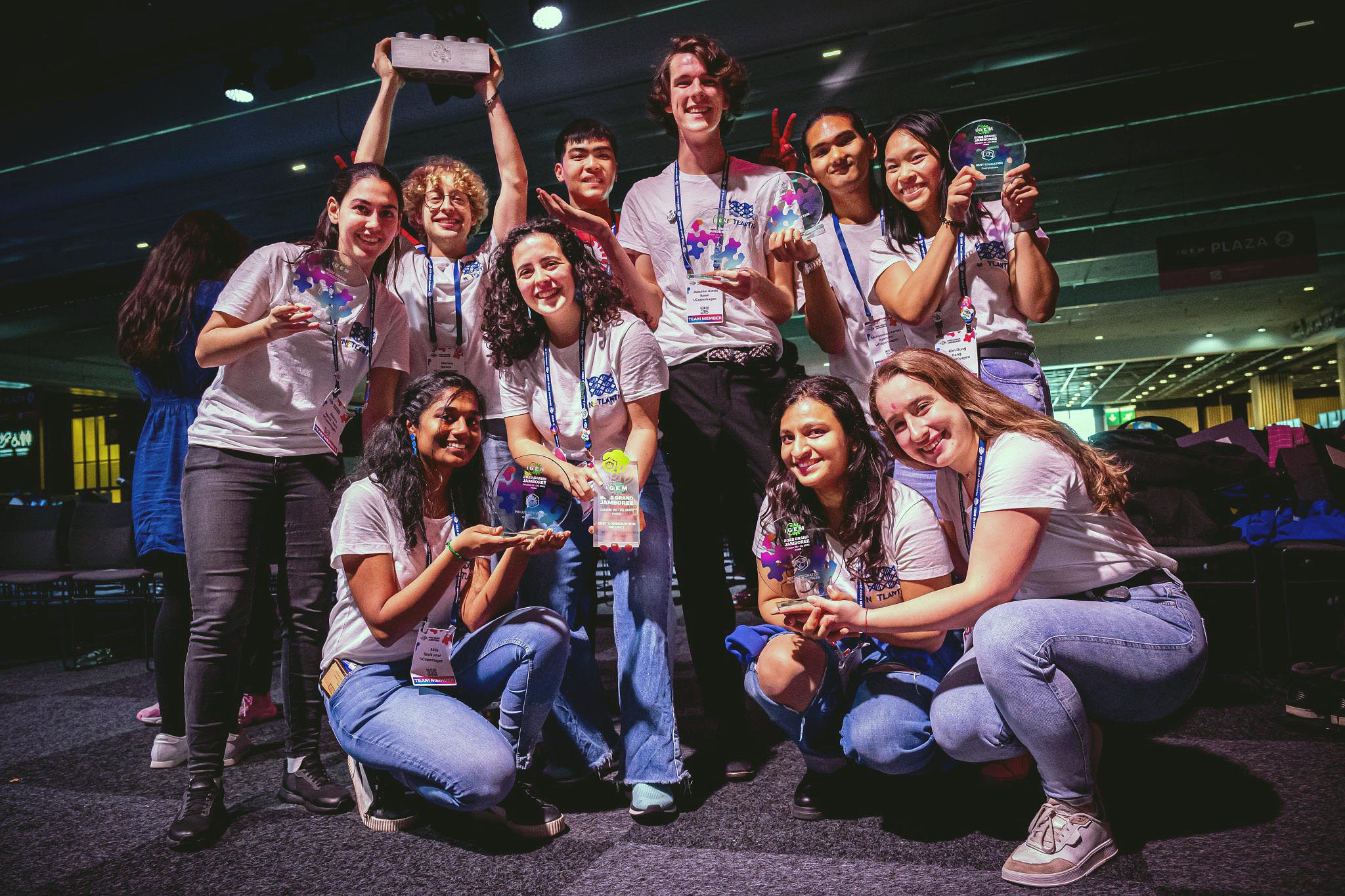 World champions — Nine University of Copenhagen students win world championships gold in synthetic biology. They have developed an idea for hybrid fishing nets made from from spiders’ webs and sea silk that can help stop pollution of the ocean by microplastics

A team of nine students from the Faculty of Science at the University of Copenhagen took part in the world championships in synthetic biology in Paris 26-28 October, where they won the main prize for the development of a hybrid net from fibres that were not plastic.

»It’s been a huge experience to be a part of this. We’ve learned a lot from having to stand on our own feet with our own project and having to do all the experiments in the laboratory,« says Joachim Ibsen.

He is studying third semester biotechnology on his bachelor’s programme and is the only Danish-speaking member of the group. The other eight are all international master’s degree students in the fields of food science, biotechnology, bioinformatics, biology and bioentrepreneurship.

The competition is run by iGem which promotes information, teaching and research in the field of synthetic biology.

The judges in the competition find, during an annual conference, the group of young researchers who have done the most innovative project – which this year was the Danish team’s project Netlantis.

The team has succeeded in fixing a problem that many have tried to solve in vain. This is what gave them the gold medal at the world championships in synthetic biology.

»We took an engineering approach to the assignment. We have taken different components in nature and made some new ones in the laboratory. Spider webs are very strong and are good at protecting against water, so we package our spider web fibre with sea silk on the surface, so that the net can last longer,« says Joachim Alexis Ibsen.

The nine students were put on the team together in November 2021 by supervisors at the University of Copenhagen. The supervisors are all affiliated with iGem, and the students had an idea ready by January, and were ready to start working on it in the laboratory.

As part of their research, the group talked to fishermen to find out how long a fishing net should be able to last. The fishermen’s nets needed to last for up to three years, so the students’ nets needed to be able to last for at least that long. Many fishermen lose their plastic-based nets in the sea, which means that there is a large risk that fish get wrapped up in them and die slowly. And the nets are degraded into microplastics that pollute the world’s oceans.

The gold medal winners’ hybrid nets don’t do this. It is made of proteins, which fish can literally eat as the net is dissolved in the sea.

Joachim Alexis Ibsen had responsibility for the modelling. This is about using mathematics and computers to create a model of how spiders’ webs are formed, and how this is done on a microscopic level. In this way, the group knew what it would make sense to spend time on in the laboratory, where they have worked together closely.

»It has been positive for the group that all members have taken part in almost all of the project’s aspects,« says Joachim Alexis Ibsen.

All members of the group have come into the media spotlight for the first time via the competition. They took part on the Danish television programme TV 2’s ‘Go’ Morgen Danmark’ on the radio on ‘Go’ Morgen P3’, in the Greenlandic newspaper Sermitsiaq, and on science site videnskab.dk.

They have demonstrated that it is possible to make a hybrid net, even though they have not conducted experiments that show how suitable the material is to spin a finished fishing net. But the students have so far dedicated all their time to working in the laboratory with the original idea – and this has ended up with them striking lucky.

»Winning was really crazy, because this is the first time a team from a university in Scandinavia has won iGem, so it was against all our expectations that it happened. It was a great feeling to get so much recognition from the judges,« says Joachim Alexis Ibsen.

What should I do now?

Did you know that fishermen in the North Atlantic lose 25,000 nets a year, and that, in theory, the lost nets can continue unintentionally to catch fish and other marine animals and harm them?

A fishing net made of nylon takes 600 to 800 years to be completely degraded in the sea, and in all that time, it spreads microplastics into its surroundings.

You can listen and read more about it in a video that presents the medal winners’ project from the finals in Paris.

Students can also keep an eye on the new iGem team that is being set up at the University of Copenhagen. iGem is an interdisciplinary competition that does not require a specific academic background for you to participate. There have, for example, also been students from the Faculty of Humanities participating.

There will be an information meeting at the University of Copenhagen on 7 December. The deadline for registration for iGEM is 15 December.