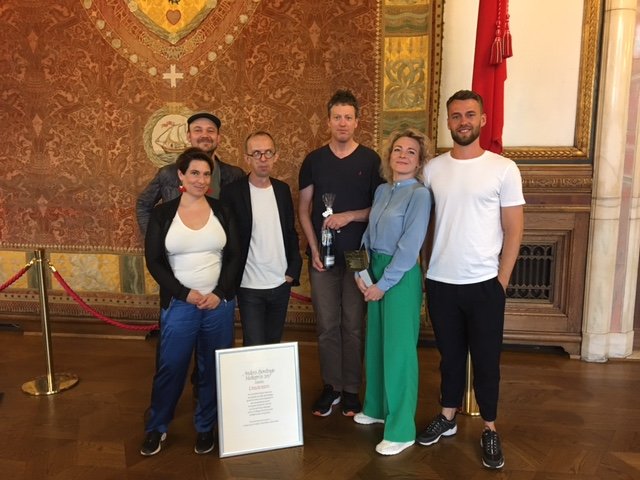 In Danish media parlance, it is pineapple in its own juice when the media write stories about themselves. And here is a juicy slice of pineapple for you: Friday, 23rd June, this year’s best specialised media was honoured at Copenhagen City Hall – and the University Post Uniavisen won the prize.

It is the Association of Danish Media, which annually distributes a journalist award and a media prize for a specialised medium that “reaches its target audience to a particular degree and/or builds up a business model and that should therefore serve as “.

The award is a Danish award of honour, which has been awarded since 1964, and which is currently being organised by the Association of Danish Media. The award is named after Anders Christensen Bording, who in 1666 published Den Danske Mercurius, considered to be the first periodical in Denmark.

The found that the University Post can be of inspiration to others out there, and justifies the award of Anders Bording’s Media Prize 2017 as follows:

“For a nice, effectively layouted, niche medium, digital and printed, with a story to tell and the courage to create cohesion among all university stakeholders. With an increase in readership, the University Post has made itself a necessity among its target group through a spritely, sustained, yet varied narrative form, both in words and in pictures.”

Three media were nominated for the media prize, and the University Post fought against the super-aesthetic magazine Scenario, which writes about trends, ideas, visions and possible futures, and which is published by the Copenhagen Institute for Future Studies and the web media Videnskab.dk, and which disseminates credible science to young readers.

The journalist award went to Asger Havsteen Eriksen, Morten Halskov and Asger West from the trade union magazine Fagbladet 3F, for a series on fatal accidents, Death on the Job. They were up against Anders Ejby-Ernst, Fagbladet FOA, for an article series on the conditions of social psychiatric homes; and Magnus Bredsdorff, Ingeniøren, and Magnus Boye, Version 2 for a series of articles on the surveillance society.

"With an increase in readership, the University Post has made itself a necessity among its target group through a spritely, sustained, yet varied narrative form, both in words and in pictures.”

As something new, the jury awarded a special award this year for a remarkable effort. This went to Altinget for “making a medium that creatively develops the DNA of the specialty medium while developing a business model that has proven its sustainability.”

In 2016, the Anders Bording Media Prize went to Realityportalen, in 2015 it went to Folk og Kirke and in 2014 it went to Samvirke.

In connection with the award, Bent Rode, 89, was celebrated. He has been calligraphing the award for more than 40 years – this year for the last time.

The University Post appreciates the calligraphy and for the honour. We thank you, our clever and demanding readers, for keeping us on our toes. And thanks – in particular – to our courageous employer, the University of Copenhagen, for the full journalistic freedom.