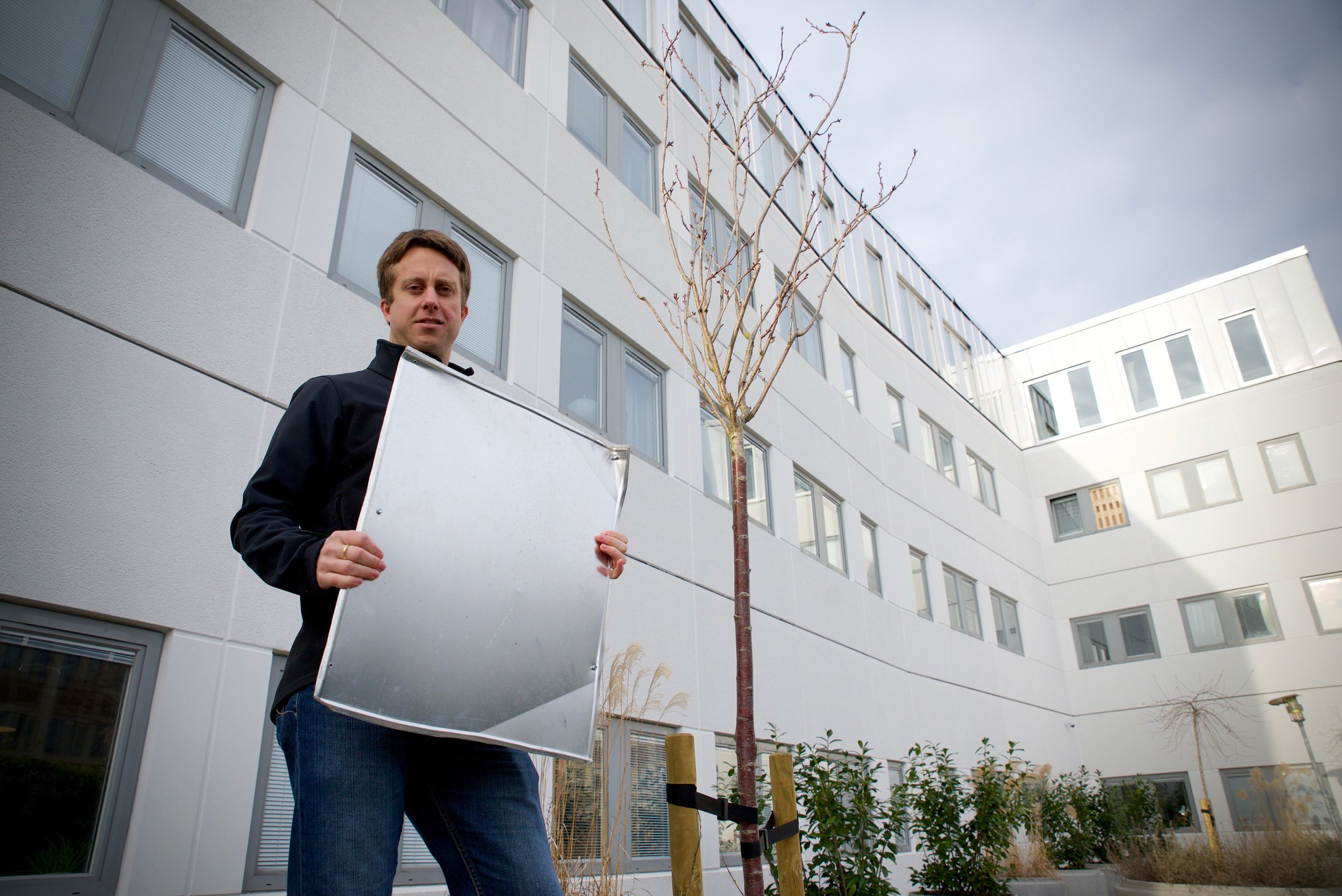 Adam Shrimpton displaying a piece of cladding that has fallen off the building at Rebslagervej.
image: Sune Anderson

Student housing — International students who rent rooms at the Rebslagervej dormitory through the University of Copenhagen Housing Foundation are strongly dissatisfied with the conditions and the rent. The rent is double the price per square metre compared to a newly built apartment with harbour views in the Teglholmen district

If you pay up to DKK 11,500 a month for a 30 square metre room, you might reasonably expect that things are in tip-top condition.

This was certainly the belief of several international students studying at the University of Copenhagen (UPCH) when they rented space in the Rebslagervej dormitory in Copenhagen’s northwest districts through the university’s housing unit.

The dorm, which has 67 student apartments is described on the housing foundation’s website as “a modern dorm situated in a former factory building that has been completely renovated. Each apartment has a minimum of two windows, and the hallways and common areas have large windows that help to create a bright and welcoming environment throughout the building,” it states.

Nevertheless, the stay at the dorm has turned into a minor nightmare after students moved into the new dorm in August 2016, as several of the students relate to the University Post.

Stinks of mold and sewage

The allegations include: Mold on the walls in several of the rooms which the residents fear could be dangerous to their health. The stench of feces from the sewage that flows into the rooms via the ventilation ducts, which also blows in a sticky dust. A basement that has been flooded several times and that smells of sewage. That there are too few washing machines. And that broken windows are not replaced.

Hannah Smith, who has stayed at Rebslagervej since August 2016 says that she unsuccessfully tried to remove the mold patch on the wall with bleach as the housing foundation did nothing to solve the problem.

“However, they have been kind enough to supply me with a new painting to cover the stain,” she says. 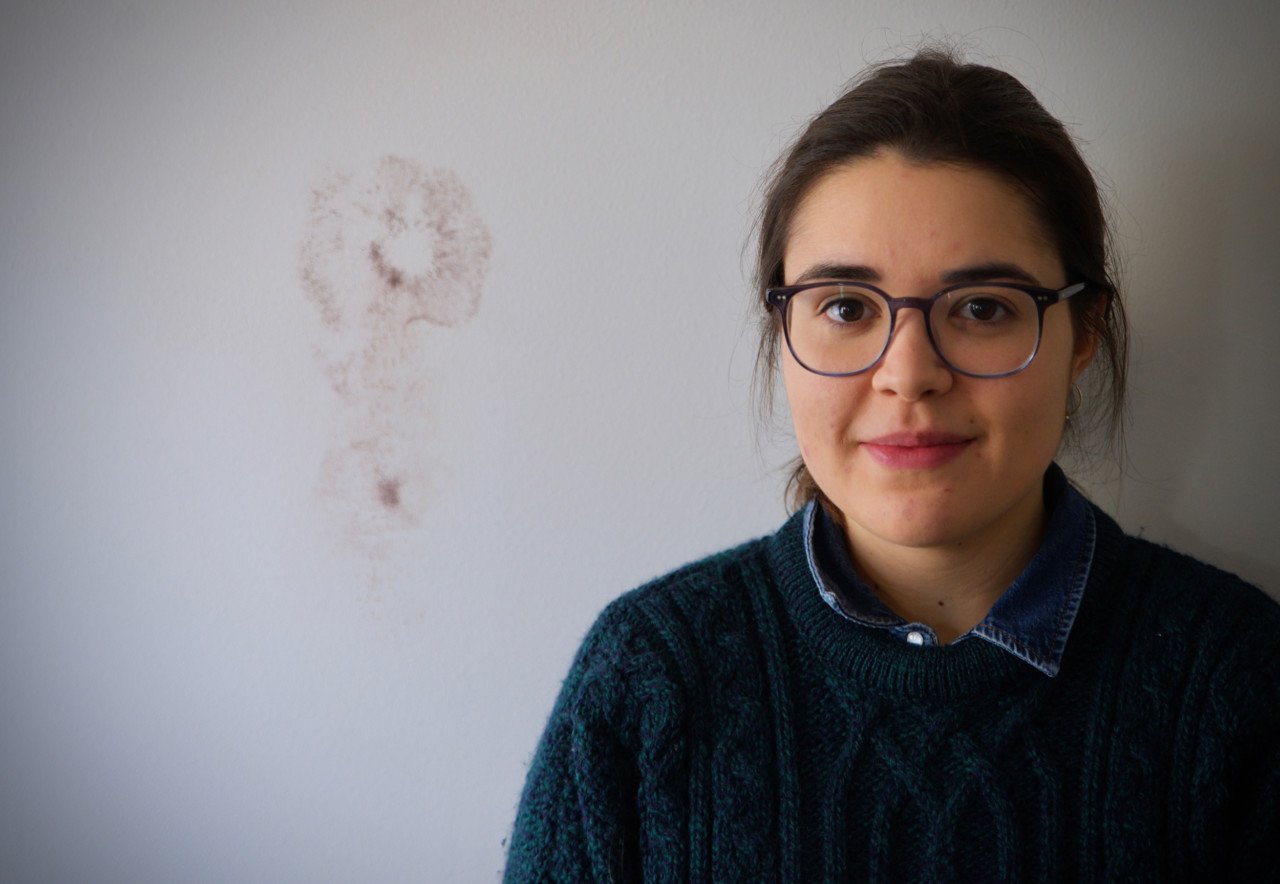 Hannah Smith says that she unsuccessfully tried to remove the mold patch on the wall with bleach as the housing foundation did nothing to solve the problem.
image: Sune Anderson 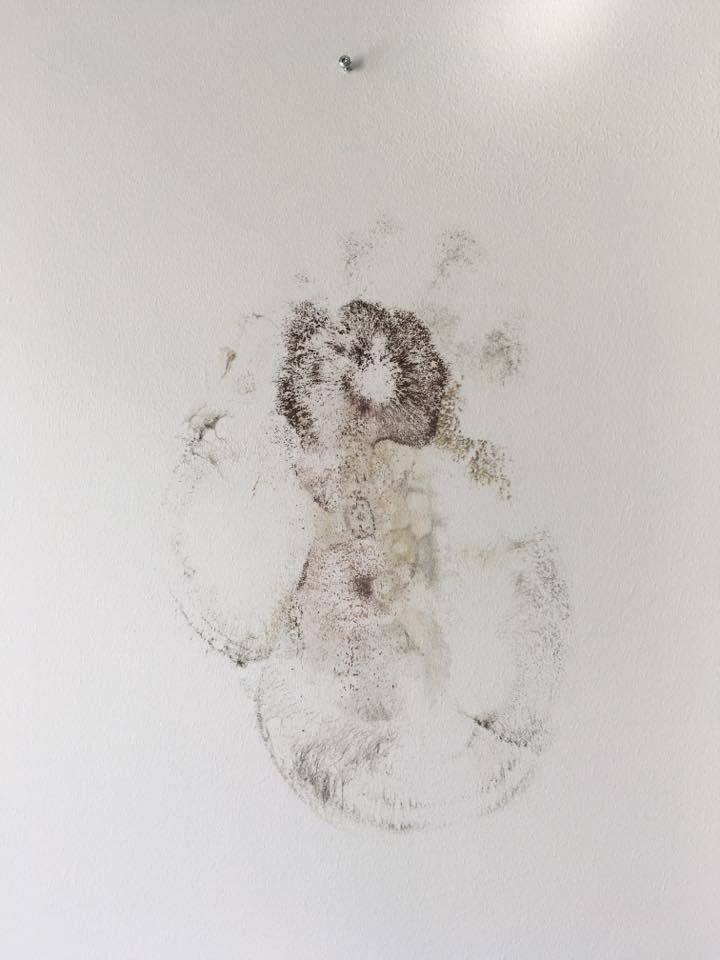 There is mold on the walls in several of the rooms which the residents fear could be dangerous to their health
image: Privatfoto 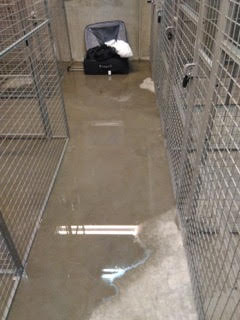 The basement has been flooded several times.
image: Privatfoto

Public areas do not live up to what residents say they were promised.

The four common rooms, which the Housing Foundation describes as “a place to read or just hang out,” is completely devoid of everything except picnic benches, tables and a microwave oven.

Johnny Cracium, who has stayed at the college since August 2016 says the premises are scanty and deficient.

Hannah Smith adds that the place feels like a hospital. 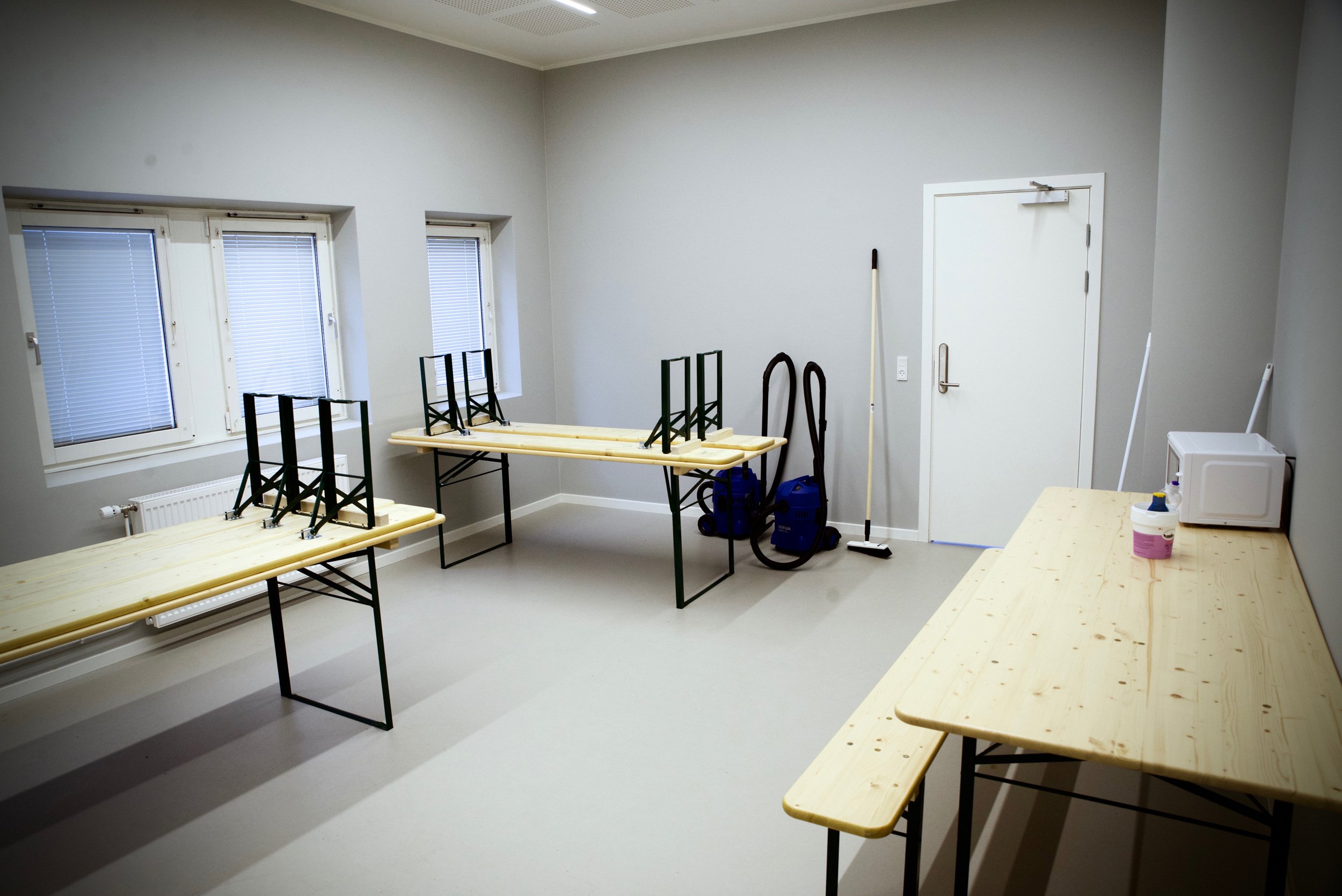 One of the common rooms, which the Housing Foundation describes as "a place to read or just hang out.”
image: Sune Anderson

Jason Russell and several other residents say they are dissatisfied with the housing foundation’s service, and that nothing is being done about the bad conditions, despite residents’ complaints.

“The service is slow, the staff are curt and sometimes rude or dismissive. I would not choose to return to this dorm, because even before the latest price hike the rents were too high, and the area is not attractive,” he says.

The resident Adam Shrimpton says that the housing foundation refers to the owner of the building for complaints, or it excuses itself with the fact that it has already asked the owner to improve the deficiencies.

According to Jacob Møldrup-Lakjer, legal counsel at tenants’ interest group Lejernes LO (LLO), the housing foundation is responsible for ensuring that leases are in order.

“The lease is a contract between the foundation and the students, so they cannot escape their responsibility and refer to the owner of the building,” he says.

Jacob Møldrup-Lakjer says that residents can appeal to the Rental Board huslejenævnet which can force the landlord to take care of the deficiencies or grant a reduction in rent.

At the City of Copenhagen’s technical and environmental administration, center manager Steffen Mark Jensen says that they have granted a permit for occupancy of the building in November 2016.

“So at that time, the requirements of the building permit were met. If the situation is now as bad as has been described here, then the residents should approach the city authorities, so we have an opportunity to inspect the place,” he says.

It is not the first time that the University of Copenhagen Housing Foundation has come under fierce criticism from disgruntled students.

In 2015 the foundation had 250 international students move into a new residence on Krimsvej in the Amager district, even though the building was not yet completed.

“We were promised a restaurant, a fitness center and a lounge. But we have barely got a bed to sleep in,” said Spanish student Marta Rosquelles.

The students were given two months rent in compensation, but for this they still had to put up with working builders in their rooms.

Subsequently the newspaper Metroxpress revealed that the developer of Krimsvej only had permission to run a hotel, and that students could therefore not obtain housing benefits – something that the housing foundation had otherwise told the students, according to the newspaper.

Adam Shrimpton lives in the Rebslagervej dorm with his wife, who studies at the University of Copenhagen.

Their two small rooms, according to the foundation’s website are 30 square metres total, but he measured them up because they felt smaller. He found out that they actually only had 24 square meters to live in.

»The rooms are 20 percent smaller than promised,” says Adam Shrimpton.

Rebslagervej is the only dorm where the housing foundation calculates common areas and outer walls into the size of the lease.

Although the procedure is legal, it appears nowhere on the housing foundation’s website.

Double up compared to Teglholmen

The rooms are small. But the price is high. DKK 8,408 a month (including utilities and charges for administration, maintenance and furniture) is what the couple have to pay for the student apartment, which includes a toilet and a kitchen in the form of two cooking plates.

Now the rent will be ratcheted up even further. DKK 10,056 a month is what the new residents will have to cough up with when the Shrimpton couple move out in late January. A 20 per cent increase. The annual price per square meter will increase from approximately DKK 3000 to DKK 3500 a year.

Housing site Boligportal.dk calculated in 2015 the average annual rent per square metre. It was DKK 1,500 for rental housing offered in Copenhagen via their website in the northwest district.

Jacob Møldrup-Lakjer, legal counsel at LLO can therefore fully understand why students think they are paying an unreasonably high price.

“It sounds crazy. That’s about double the rent per square metre as a newly built apartment with a harbour view in Teglholmen on the Copenhagen Sydhavnen district,” he says.

International students use a lot of electricity

As for the rent increases at Rebslagervej, the housing foundation’s temporary director Torben Snowman, says that they have been forced to put electricity up to DKK 431 a month per housing unit, as “international students unfortunately often give no thought to such things as electricity costs.”

According to Adam Shrimpton’s lease contract, he paid DKK 169 a month for electricity, and this will now increase to DKK 700 for future residents, i.e. by DKK 531.

The increase in electricity costs can therefore only partly explain why the total lease now increases from DKK 8,408 a month to DKK 10,056 – a DKK 1,648 increase in total.

Shrimpton maintains that all the information on the costs of basic rent, heating, electricity, water, antenna, furniture and internet for all leases are freely available on the Housing Foundation website, so the numbers for 2016 and 2017 are comparable.

As proof, he has put the information into a spreadsheet with a link to each lease on the foundation’s website.

[The document is available here]

The residents of Rebslagervej are so unhappy with their rental prices and their conditions that they have set up a residents’ association and have complained to the City of Copenhagen authorities.