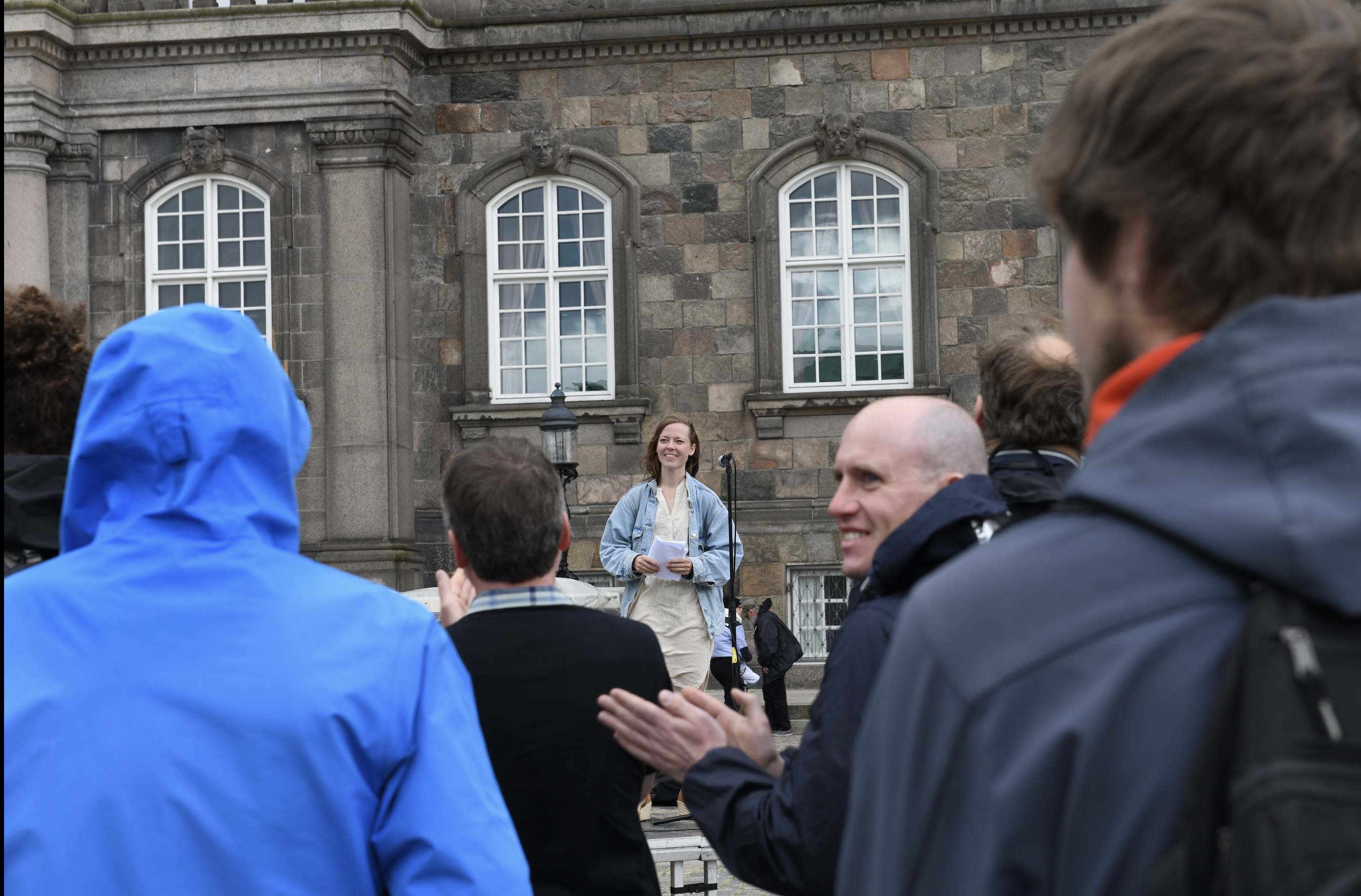 »There are so many who are afraid to sign the petition. And this is a sign that something is completely wrong. It also confirms that this is important,« says PhD fellow Maria Toft, who is one of the key people behind the campaign to safeguard freedom of research.
image: Drude Rasmussen/Uniavisen

Protest — The whole foundation of research in Denmark is being undermined. This was the message from dissatisfied researchers when they handed in 2,252 signatures to politicians at the Danish parliament.

It looks like a rainstorm is on the way. It is a Tuesday afternoon in front of the Danish parliament buildings in Copenhagen, and 50 people are in front of a tiny stage, waiting.

They usually have their heads buried in philosophy books and code manuals. Today, however, a selection of Denmark’s researchers have turned up in protest, demanding better working conditions for themselves and their future colleagues. Several of them, including an associate professor at the Department of Biology at Aarhus University, Nils Risgaard-Petersen, have come a long way to protest.

The weather holds today. But heavy storm clouds are looming over Danish research.

2,252 researchers from throughout the country have signed a petition saying that things have got so bad for the freedom of research in Denmark that a commission needs to be set up to investigate the problem.

»This is a success, because we have finally got the politicians to talk,« says Ole Wæver, a professor at the Department of Political Science, in his speech to the participants that have turned up. He is the main speaker and one of the initiators of the petition.

All the parties’ research policy spokespersons have been invited to speak, but as the appointed hour of 12.00 passes, only two have arrived: Stinus Lindgreen (Social Liberal Party) and Jens Henrik Thulesen Dahl (Danish People’s Party). The Red-Green Alliance sent one of their political consultants, because »Victoria Velasquez is in the middle of some important negotiations«.

A commission should investigate three things, according to the petition:

The Minister for Higher Education and Science, Jesper Petersen (S), has promised the researchers that he will invite them for a dialogue meeting on Monday 22 August. But he does not have the time to drop by today.

Stinus Lindgreen has listened intensely to Ole Wæver, and is now the first spokesperson on the stage, and he refers to the missing people:

»It’s a real shame that more spokespersons are not here today. But then you have to settle for the two best ones,« he says, referring to himself and Jens Henrik Thulesen Dahl. Both of them support researchers’ demands for more basic funding.

But suddenly Jacob Mark (Socialist People’s Party) and then Ida Auken (Social Democrat) come sprinting across the square, just in time to say a few words. They both conclude that they will not allocate more basic funding to research.

None of the spokespersons say directly that they will support the commission that the researchers suggested setting up in their petition. Instead, they point to the option of a working group or expert group that over a shorter time span will be able to look at the fundamental structures and challenges to the freedom of research.

And this is the point where Ida Auken and Jens Henrik Thulesen Dahl agree on what one of the challenges is. Ida Auken spends some of her time discussing the Chicago Principles. She emphasises that the Social Democrats have a strong belief in both freedom of research and freedom of speech:

»The world of research is not itself beyond being empirically investigated«

Even though the party spokespeople do not directly point to an outcome from the researchers’ campaign, the organisers are happy. They are mostly pleased by the fact that politicians seem to be receptive and willing to enter into a direct dialogue with researchers about their working conditions:

»When people from the world of research show up and point out problems, the politicians are more responsive and say: Then we have to look at it. Clearly there is no majority for any specific reform right now. But they clearly trust us and want to listen to us. In fact, just within this last year, I have felt a new responsiveness from spokespeople, government officials and the Minister,« says Ole Wæver and adds:

»The world of research is not a subject that in itself is beyond being empirically investigated. But there are no thorough studies into what the state of Danish research actually is. So this needs to be done.«

»It is simply irresponsible to have politicians spend so much money on research, and not really care about whether it actually works. It is a poor management of our common interests if you erode the foundations of future research.«

A community of the spirit

The 2,252 signatures have been collected through the course of approximately two weeks. But only a fraction appeared at the demonstration.

»It is more a community of spirit than a political community,« a random researcher says in passing, and seems a bit disappointed. The organisers of the event are not disappointed, however, that so few of their colleagues have chosen to turn up today.

»The world of research is not known for its activism. People are busy researching. So the fact that we, over a relatively short period of time, and without any large organisations behind us, can gather so many signatures, is quite OK. The event was not dubbed as a demonstration – more a happening to mark the presenting of the signatures,« says Ole Wæver.

His co-organiser Maria Toft emphasises that many of her colleagues from the Department of Political Science, and other researchers, have been afraid to sign the petition:

»That so many people have signed anyway is a big thing. There are so many who have been afraid to sign the campaign. And this is a sign that something is completely wrong. It also confirms that this is important. If you are afraid to sign a reasonably open, and not particularly forceful, petition, something is wrong.«

Before the unusual happening is over, the researchers all chime in with a song. »Your thoughts are free,« they sing in unison, before they all filter back to their offices around the country. The storm recedes. For now.