What on earth was the US Secretary of State doing at the University of Copenhagen? 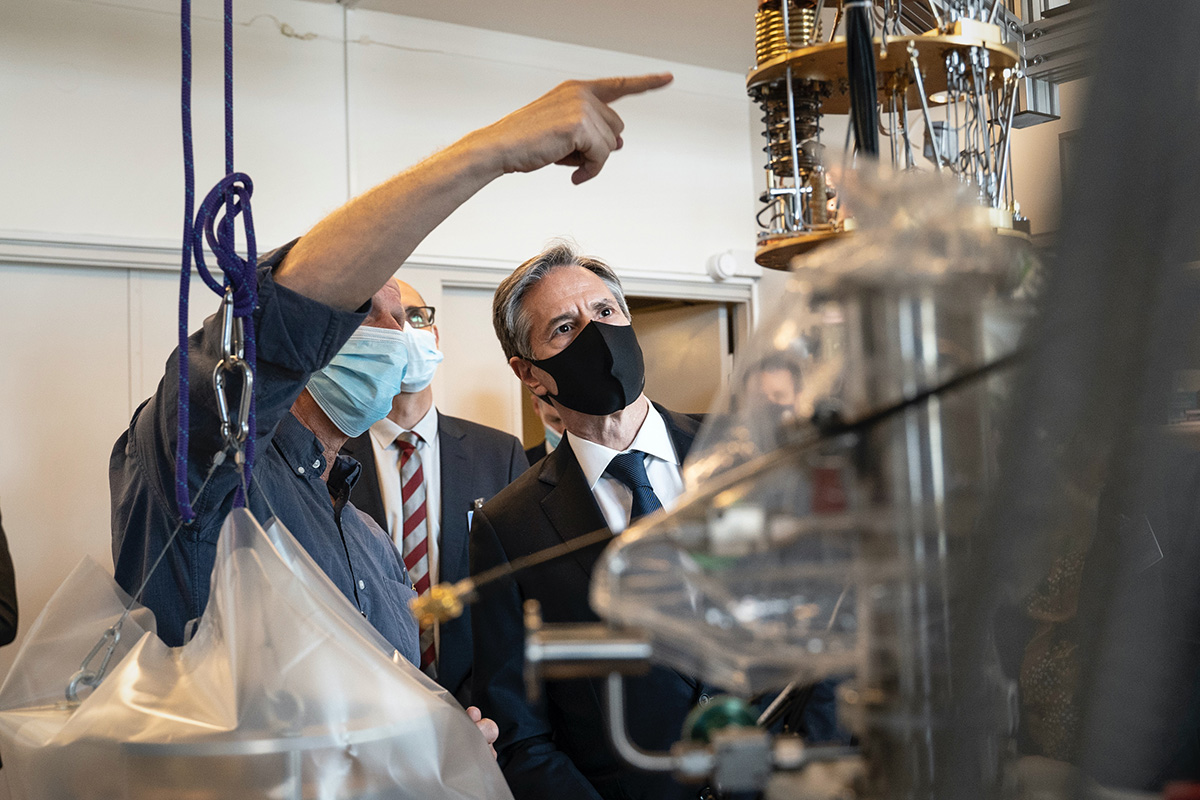 Anthony Blinken cancelled meetings with top executives in Danish business, then made a surprise visit to the Niels Bohr Institute. It was all about the next generation of computer technology.

If you were at the H.C. Ørsted Institute in Copenhagen during the past week, you will have wondered about some weird goings on.

It was teeming with people from the Danish intelligence unit PET, representatives from the US embassy and sniffer dogs searching the buildings and their surroundings. Entire floors were blocked off, and many students and researchers were denied entrance by serious-looking men.

It was quite a hullabaloo, and all for one person: The US ‘foreign minister’ or Secretary of State, Anthony Blinken.

When Blinken visited Denmark on Monday 17 May, his schedule was so tight that he chose to cancel a meeting with senior executives from Maersk, Novo Nordisk and other worthies from the Danish business community. Yet he visited a number of researchers from the Niels Bohr Institute who are involved in quantum technology.

»We’re really overwhelmed by this. It has made a deep impression on us,« says head of department Jan W. Thomsen.

He looks like a proud man. But also a relieved man. Before the Secretary of State’s visit there was a series of hectic days with security meetings, down-to-the-minute planning and a red-hot cell phone at all times of the day.

Even the most lowly practical details became logistical problems:

It took long meetings just to plan how the delegation consisting of Blinken, Rector Henrik C. Wegener, Dean Katrine Krogh Andersen, security officers and a swarm of US journalists could be on the fourth floor where the US Secretary of State was to talk to Charles Marcus, professor at the Centre for Quantum Devices and principal researcher at Microsoft.

The meticulous script included details of who should take which elevator and when, and where they should stand in the elevator.

Before that, bomb sniffer dogs had searched through the whole the building. The PET people even lifted them up into cupboards so that they could sniff out if anything suspicious had been planted there.

Against the wishes of the security-people, the dogs were not, however, allowed to run around the so-called clean room, a laboratory free from impurities and specks of dust so researchers can work on nanoelectronic components.

»If a dog gave itself a shake in there, we would have to redo the clean room immediately,« says Jan W. Thomsen. »Here you have to negotiate with PET and say: You can’t take the dogs in here or here. We cannot accept that. But send in a police officer – so long as he dresses up in one of our space suits.«

Tore up the pavement

While policemen and dogs marched around campus, researchers joked that they hoped none of their colleagues kept a joint or something stronger in one of the their lockers.

»As it happens, there wasn’t, but this joke helped lighten the atmosphere in the middle of all the seriousness.«

»It was really stressful. I think my phone rang every ten minutes in the days leading up to it.«

The PET people were also hard at work outside the building.

They demanded that a locked container was opened, but no-one had the key. They pulled up ten high-edged pieces of pavement next to the bike path, so that the big American vehicles could turn around and drive the Secretary of State to safety if something unforeseen were to happen to the delegation.

When Anthony Blinken turned up, the whole of the Nørre Allé boulevard, a major throughfare for buses and cars, was cordoned off. 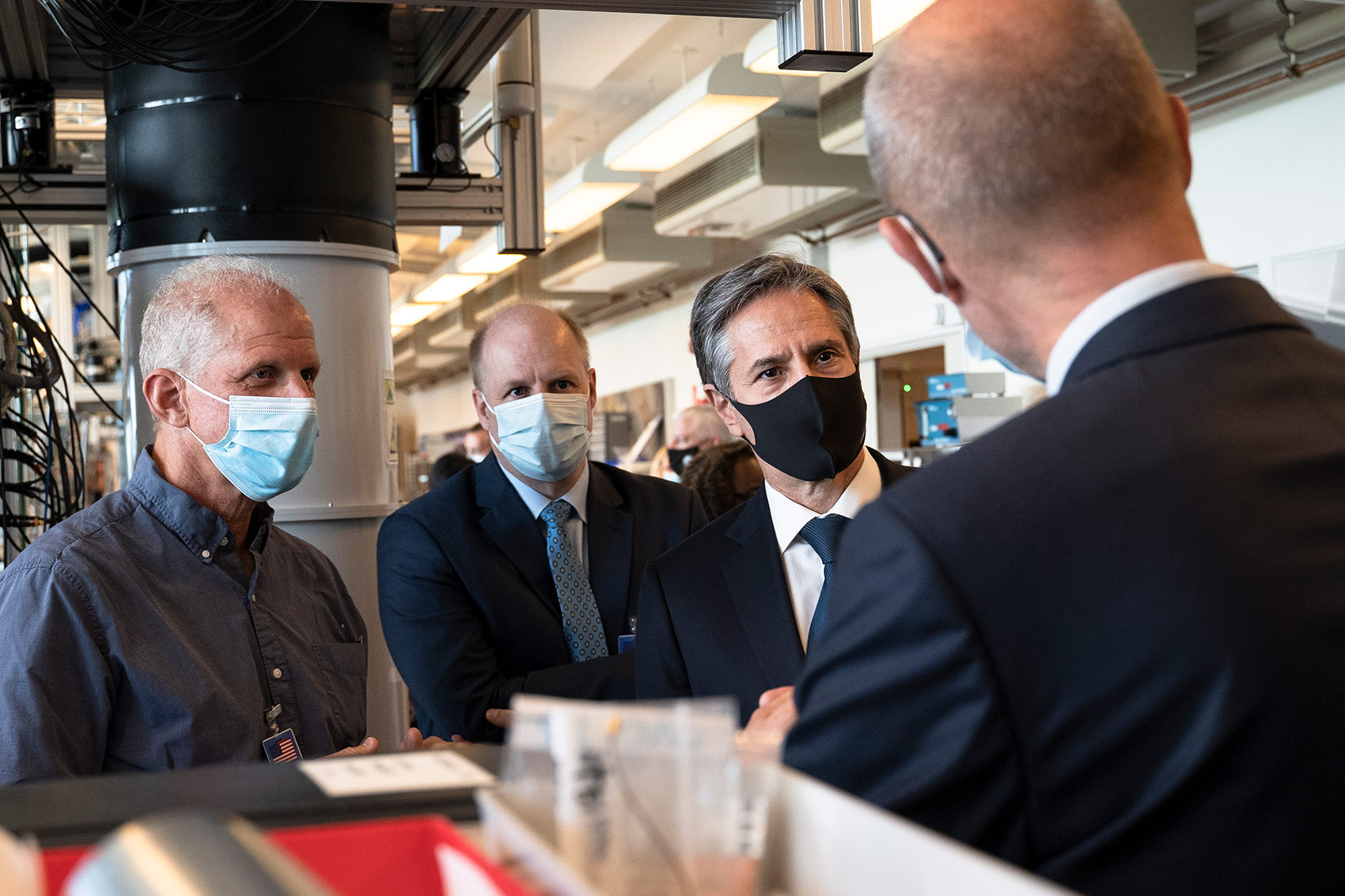 They also insisted on clearing the floors above and below the laboratories that Blinken would visit, so that chemists on the fifth floor, who are not affiliated with the Niels Bohr Institute, had to negotiate to get access to their own experiments.

»It is in not in the spirit of a university to have researchers and students rejected at the entrance. But here, we had to play a different game.«

You have to wonder: Why on earth did the US Secretary of State want to visit some laboratories at the University of Copenhagen?

There are several answers to this question, according to Jan W. Thomsen. Some of them are obvious: There is a close collaboration between Danish and US researchers within the natural sciences, and at the Centre for Quantum Devices researchers from UCPH are looking for breakthroughs in close collaboration with the US company Microsoft.

The key part of this is that the quantum technology that Professor Charlie Marcus and his research colleagues are dealing with has the potential to revolutionise our society.

Jan W. Thomsen gives a couple of examples: By way of quantum technology, it is possible to develop sensors to measure magnetic fields for the benefit of the field of medicine. You can make data transmission 100 per cent secure by means of quantum encryption, and it is possible to develop supercomputers that can solve previously insolvable calculations.

All of this can help to create ground-breaking developments in, say, transport, energy supply, health and information security.

Compared to a fully implemented quantum computer, the strongest computer we have today would like an abacus.

Compared to a fully implemented quantum computer, the strongest computer we have today would like an abacus. So we get some colossal forces at play.«

»And then many will say: Well, that’s far out in the future. But I have to disappoint them and say: It is not. It is happening right now. And it’s now we need to think quickly.«

Jan W. Thomsen puts it in a different way also, and this may make it easier to understand why Anthony Blinken visited the University of Copenhagen:

»It is clear that this is a race, and it is on the cards that as a superpower you do not want to be number two. That’s why the Americans are out making partnerships with the strongest research environments.«

»And it’s crazy to think that Denmark is so much at the forefront of this area that the Americans think: Oh shit, there’s something going on there.«

Could not get him away

The question is whether it actually means something to have a US Secretary of State come visit?

If you ask Jan W. Thomsen, the answer is yes. The visit marks the beginning of a closer collaboration between Danish and American universities, he says.

The first meetings with the US embassy are already in the calendar after the visit. And the head of department reckons that the dialogue will lead to a greater exchange of researchers and increased collaboration on specific projects.

»The visit definitely meant something. It might also have the effect that there will be more awareness of some of the Danish strengths [in this research area, ed.] — also abroad,« says Jan W. Thomsen.

Anthony Blinken certainly seemed interested in the quantum experiments that were taking place at the Niels Bohr Institute, according to Thomsen.

In fact, the Secretary of State had so many questions that his personal secretary twice asked Jan W. Thomsen to remind him of the schedule. He had to go to a meeting with a Danish minister.

»But you can’t just interrupt a US Secretary of State who is in the middle of a quantum physics discussion,« says Jan W. Thomsen.

»Here you have to show some tact and say: ‘Well, should we move on’. This is not something you learn on a university degree programme!« 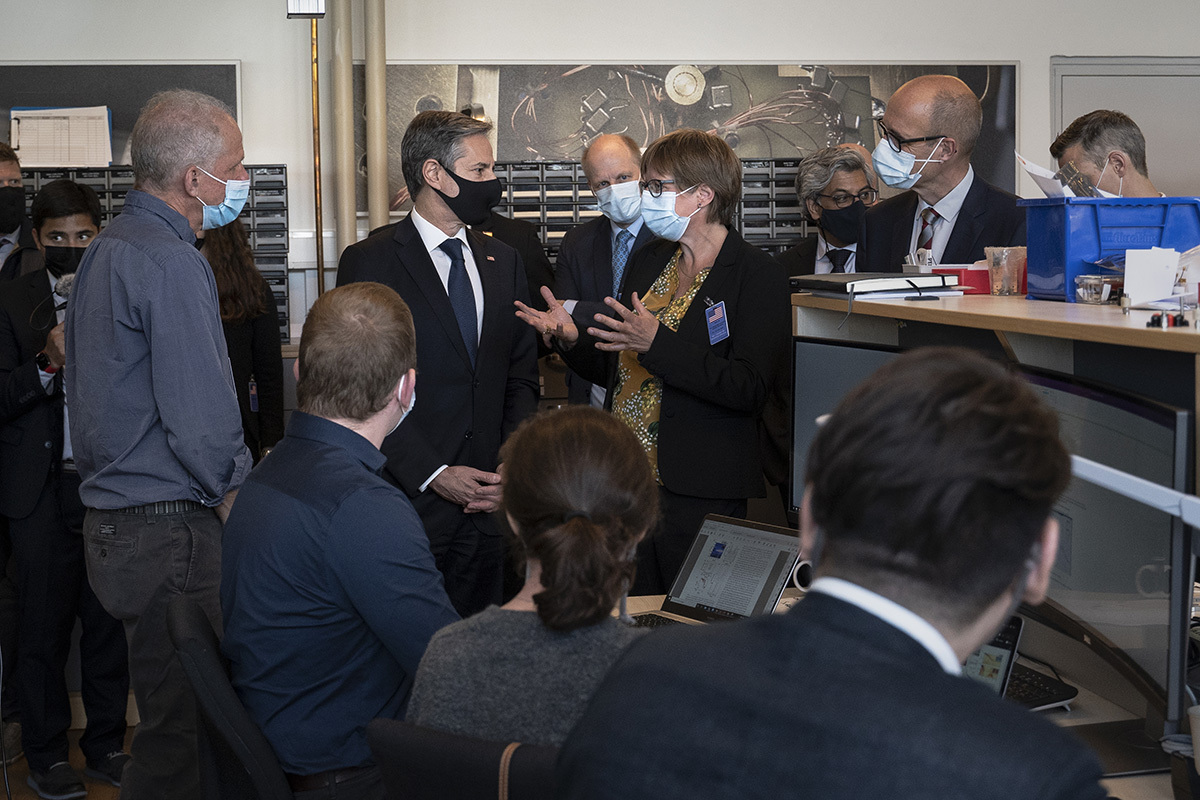