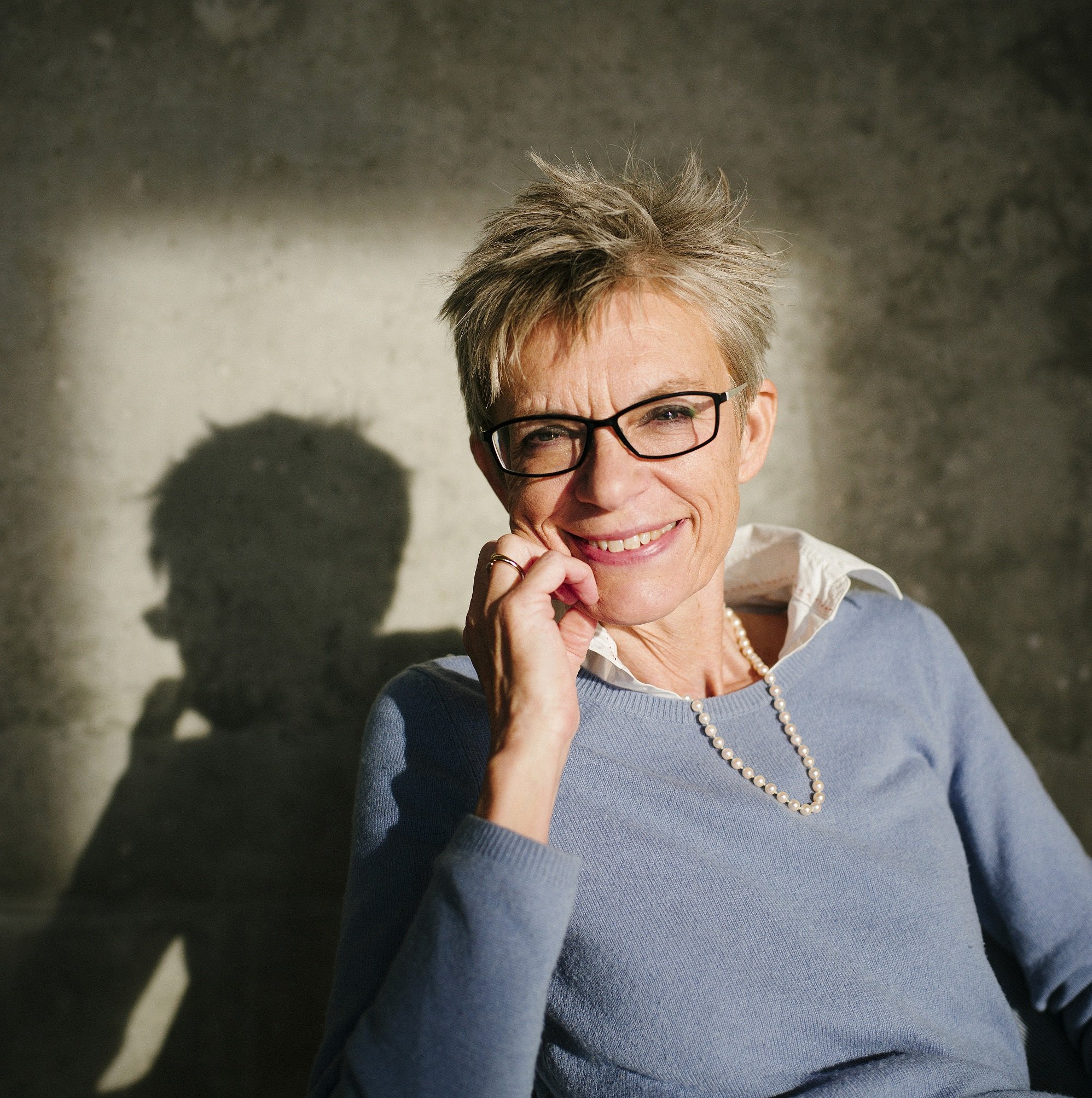 Portrait — She is the unofficial University of Copenhagen fundraising champion. Ulla Wewer describes her 11 years as Dean of the Faculty of Health and Medical Sciences as a 'golden age'. We asked her how she does it.

If you ride in to work an early morning from the northern suburbs, you might have tried been passed by Ulla Wewer. And the 63-year-old Dean is not the granny-type who needs an electric motor to keep the wheels spinning.

At the dean’s office, she switches the bike helmet for an outfit that is more ladylike, and soon the skinny woman with spiky hair and pearl jewellery is on her way to the first meeting of the day.

1980: Master of Science in Medicine, University of Copenhagen

2002-2005: Associate Dean at the Faculty of Health and Medical Sciences

When you notice Ulla Wewer, it is not due to her similarity to Annie Lennox, but her ability to raise money – a lot of money – to the university from private investors.

In recent years, cooperation with industry – the Nordea-Fonden, the Novo Nordisk Foundation and the A.P. Møller Foundation – have been the focus of attention.

New partnerships between universities and businesses have made it possible to create state-of-the-art research centers that draw international profiles to the university’s campus in the city’s Nørrebro district. And, critics argue, the balance between the externally funded centres and the faculty’s theoretical departments may tip if this development continues.

The University Post has invited itself over for coffee at the Dean’s Office in the building which makes up the right flank of the Maersk Tower, where Ulla Wewer sits with a panoramic view of the building which she conceived, and which has been quickly named a UCPH landmark.

“Do you not want to enjoy the view?” she asks, shooing me into a place with a direct view of the surprising circulars of the building, the copper lamels, and the oak wood, more precious than the varieties they pay for in cheaper buildings.

In Ulla Wewer’s story there is a point to which she often returns, so we start there. As a student, she worked in the pathology department laboratory, where she made a discovery that ended in an invitation to the United States:

“We had developed experimental tumors that produced matrices, which I was very curious about. What was it?” 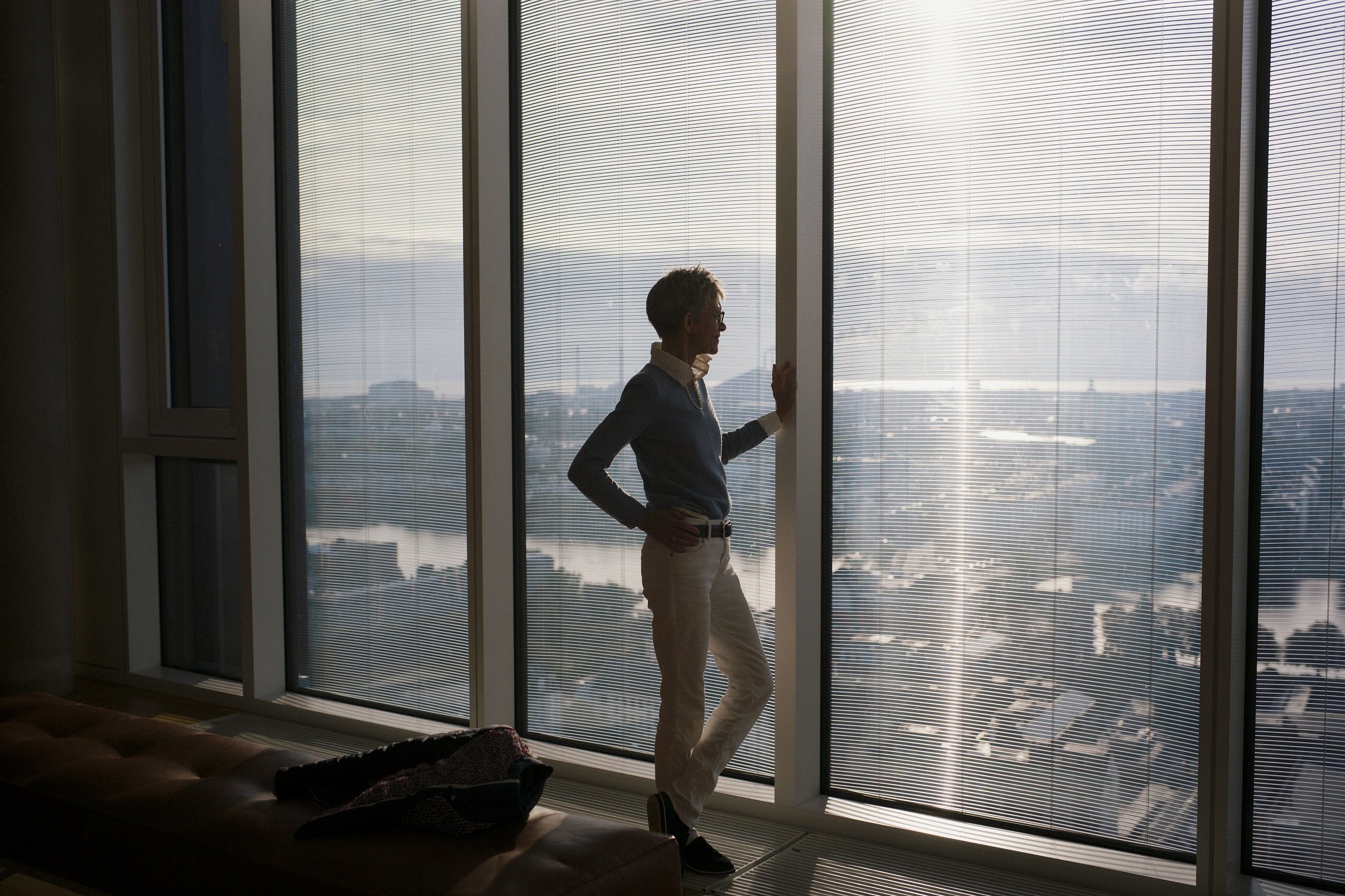 The view from the 15th floor of the Maersk Tower
image: Daniel Hjorth

During a congress at the Rigshospitalet, Ulla Wewer spotted an American top scientist, who she approached and told about her observations. The conversation made him so interested that he brought the young student to his research group at the La Jolla Cancer Research Foundation in California. The rest of her student years she commuted between San Diego and Copenhagen, and a couple of years after her graduation she got a year’s employment in California and then at the National Cancer Institute in Bethesda.

It was courageous to go straight to the American researcher in the canteen that day?

“You could say so, yes. But it was my professional curiosity that put me up to it. I met the right people at the right time. But it was also about saying yes to the mentoring. It was this huge skill that American scientists had, that lifted me up on a wave.”

It sounds like Ulla Wewer practiced a kind of academic sharing economy before the concept even existed. She gives everything she has – and that is more than most – and she gets a lot in return. We will get back to that.

During the research visit to the United States, Ulla Wewer’s vision of internationalization, university infrastructure and collaboration with business was founded. Three areas where the faculty has moved up significantly over the last 11 years under Ulla Wewer’s leadership.

Ulla Wewer remembers her return to the University of Copenhagen: “I thought: Oh, no, it looks completely like when I was a student. Everything looked like itself. The laboratories were in such a poor condition that the Working Environment Authority would probably not renew their approval for the future.”

But it would take some years before Ulla Wewer chose to focus her energy on a makeover of the UCPH research facilities. First, she concentrated on her cancer research and set up a research group that, as a matter of course, attracted international colleagues.

This work-life balance thing, it makes me smile a bit. To me it all mixes together.

When had to choose associate deans, he wanted her because of her international experience.

“It was, of course, a difficult decision to leave research. Or: I have not really left it, I’ve just replaced my small laboratory with a very big one,” she says with a smile.

“I’m still very close to the research. And you don’t have to do it all yourself. The beauty is out there. It’s deep in me – the joy when things go well for someone. And when someone is in trouble, how can we help them? How can there be space, space for debate, space for those who run fast and those who run a bit slower – how can you get the entire melting pot to work so that all academic fields get the opportunity to move forward? ”

Ulla Wewer’s talking is backed up with eager body language. As she talks about academic fields in motion, she nudges at the same time invisible groups of staff around on the table into small, synergic networks.

“I enjoy seeing others go a long way, and I give everything I have got so we can move on together. This is a strength in the world of researchers where things can easily get competitive. If you shine just a little, but give a lot, you also get a lot in return.”

The purse on the table

People working close to the dean describe her as a high performance machine that only stops its flow of emails in the few hours she is asleep. To that she says:

“I’ve always worked this way. If you want to reach the last ten per cent, you should also give the last ten per cent. This work-life balance thing, it makes me smile a bit. To me it all mixes together. You have to take time to talk with the researchers, they need to be able to go in and out the door, and you need to be able to email them Saturday afternoon if they need it, and need a comment on a large application.”

Applications, this is Ulla Wewer’s cardinal skill. She is the unofficial champion of getting private sector funding to health research, and she describes her relationship with business as fruitful, and to the good of everyone:

“That I managed to make my tower dream happen, this shows the real energy that is in our field. It is about having research and education tasks that we need to resolve together in this country. And I believe in partnerships: We can, you can, and together we can get there.”

Ulla Wewer strokes the table top in larger and larger circles as she describes her collaboration with the A.P. Møller Foundation:

“If you want to, you can move things quickly. The Maersk Tower is proof of this. If the major players in society want it to happen, then it’s just about jumping aboard.” 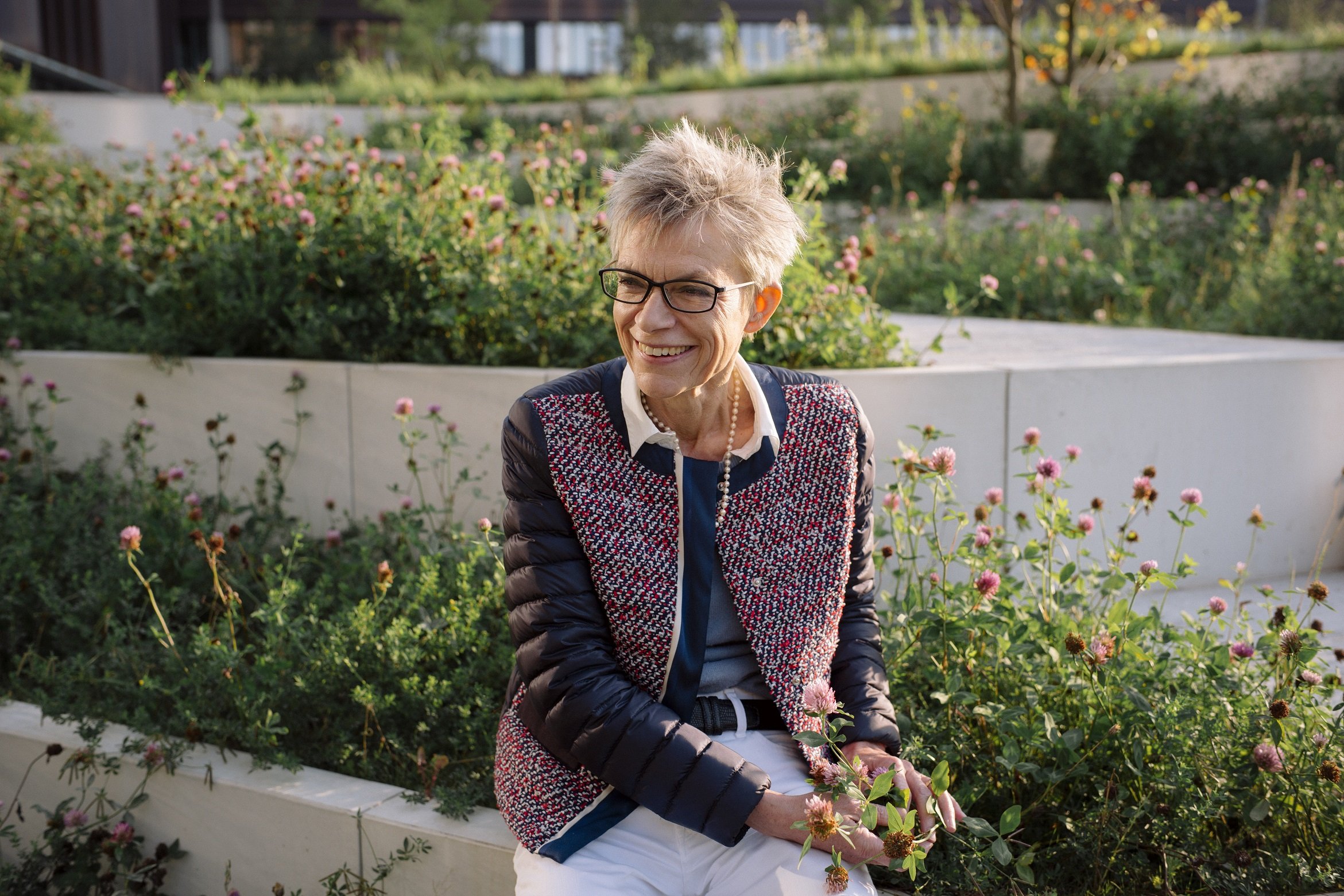 Ulla Wewer is an amateur botanist, so she knows the names of the flowers in the hedgerow-like vegetation around the new tower for the health sciences.
image: Daniel Hjorth

Here Ulla’s lacquered purse appears on the table. It is the dean’s own linguistic symbol for the projects that are visionary, and thorough, enough to get under her arm when she’s out networking:

“I have a principle called ‘what’s in Ulla’s lacquered purse?’. Of course I mean this with a dose of self-irony. But it’s a symbol that everyone, me inclusive, have to be prepared. People should understand that if we are to help each other out with the fundraising, then it’s no use finding out Wednesday that there is an application deadline Monday, because you will never get the money. You may land it once, but if you want to get into a virtuous circle, and this is the art, then you have to place your bets on something that has energy and creativity for the next five to ten years. If not, the results will never get to the patients or to the animals.”

The claim that private investment distorts research, is rejected by Ulla Wewer as a myth. She says that there is a lot of exposure to competition – too much – but the centres funded by external grants, and the theoretical departments, are in the same boat.

If you shine just a little, but give a lot, you also get a lot in return.

The first gets fixed funding for a set number of years, while the latter is on the government budget, but both have to go out and get the last half or third financed. And by the way, private funding also goes to basic research, she says:
“Ten years ago, the Nordea Foundation helped finance a centre with interdisciplinary research in healthy aging, purely on trust. It was courageous and visionary, because long-term research is risky and there are no quick results.”

Ulla Wewer talks about the students, whose commitment blows her away. And she wonders what it will take to reduce their experience of stress, as:

“Seen through the perspective of a lifetime, the years of study are an experiment where you can really try things out, also failing, yet the most important thing is to try!”

And she talks for a long time about her vision of getting closer to citizens for the benefit of both them and the research:

“We would like to invite people into the new tower so we can have discussions across more human … yes, you can almost call it sensations. We also need feedback. We should not only communicate in press releases, but in the literal sense be a part of society. This used to be something we said, and we delivered skilled graduates … but I’m aware of how we take the next step, in new dynamics and in new partnerships.”

“I have no plan for the third chapter of my life. I’m 120 per cent where I am at the time. I contribute to plans for the Faculty’s next five or ten years, and it does not matter whether it’s me or someone else who is going to carry them out.”