When the Humanities Council disrupted the UCPH commemoration 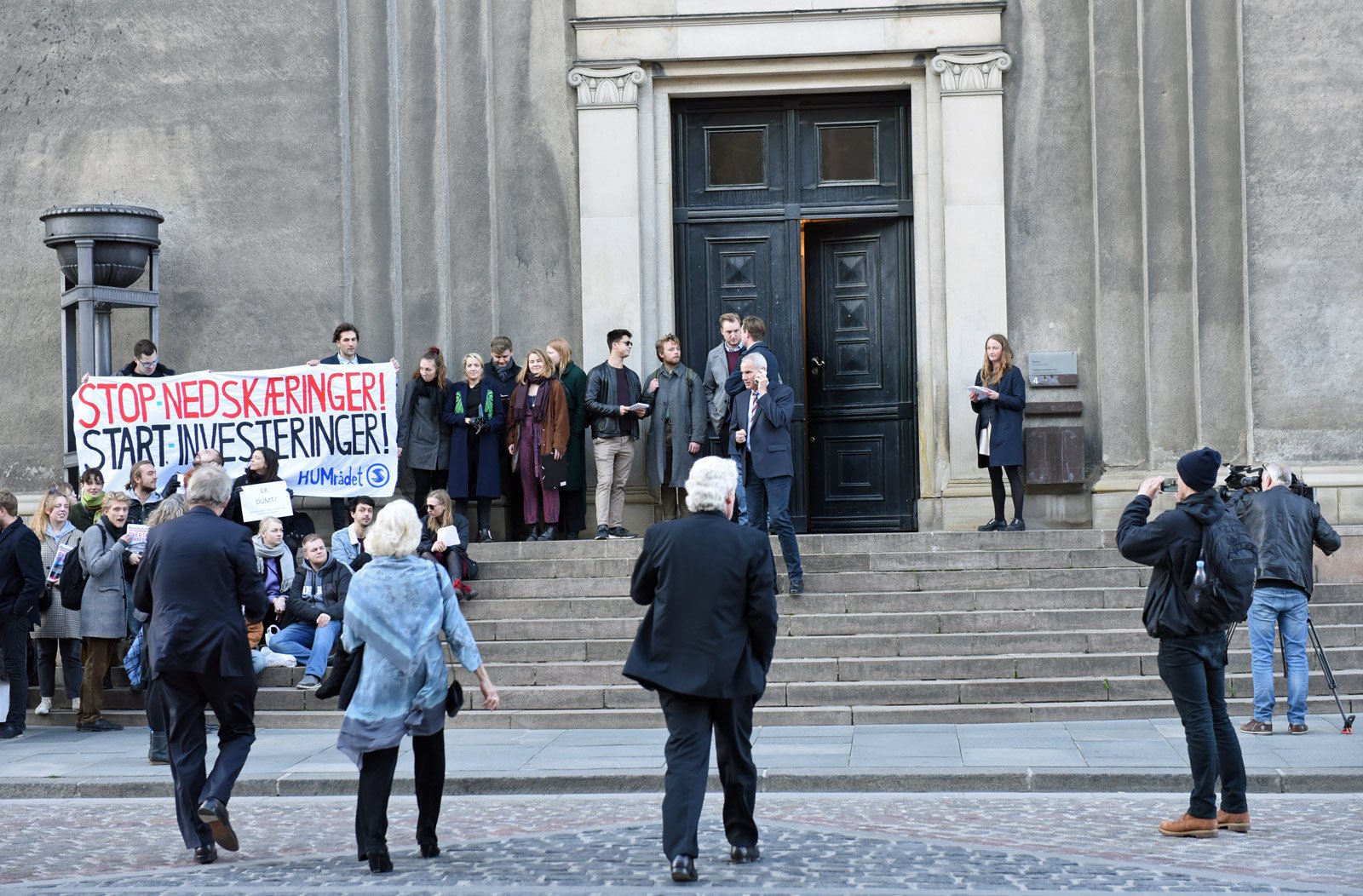 Guests arrive at the University of Copenhagen annual commemoration ceremony 2018 and are greeted by demonstrators from the Humanities Council.
image: Dennis Christiansen

Protest — About 30 students showed up at the UCPH annual commemoration to show their dissatisfaction with university cuts. The chairman of the Humanities Council got into a brief discussion with research and higher education minister Tommy Ahlers.

It’s cold weather for a demo. Still, about 30 students have gathered at Frue Plads in front of the Ceremonial Hall at the University of Copenhagen (UCPH) where the commemoration is slated to take place a little later.

We have one of the world’s best universities, but every single day they help implement cuts that make UCPH worse off.

Several of them have defied the cold, and they have turned up clad in hats and scarves. It is a big day today. Rector Henrik C. Wegener and all the deans are there, just like Her Royal Highness Queen Margrethe II and research and higher education minister Tommy Ahlers.

At the top of the stairs up to the Ceremonial Hall, several members from the Humanities Council (Humrådet), the humanities’ student council chapter, stand with a two metre long banner with the inscription “Stop the cuts!”

The Council is demonstrating against the Danish government’s year-on-year cuts to universities. Last week, the Dean of the Faculty of the Humanities reported that it, once again, would have to swing the axe. This time DKK 37 million has to be slashed from an already tight budget.

“The politicians continue to cut down on universities. We have one of the world’s best universities, but every day they help implement cuts that make UCPH worse off. And we do not think that Tommy Ahlers should come out and celebrate the university without being reminded that they are helping to destroy the university,” says Niklas Zenius, chairman of the Humanities Council and one of the initiators of the demonstration.

Niklas Zenius has a clear message to Tommy Ahlers:

“If they want a world class university, they will have to deliver the money it costs. We cannot continue to maintain the quality, and it has already dropped on several programmes. If you are able to find money for tax relief, then you should also be able to save the programmes that are the basis for the Danish future.”

"If they want a world class university, they will have to deliver the money it costs.

At the foot of the stairs are a few photographers, ready to film the Minister for Higher Education, and a cameraman from the TV2 Lorry station carrying a large tv camera.

On the other side of the square, a couple of bodyguards from the police intelligence service PET in anonymous black suits and shiny shoes are on hold.

Ralf Hemmingsen, the former rector of UCPH drops by, and a bit later the current rector Henrik C. Wegener.

Ahlers: Are we to talk or what?

When the bell rings at 13.40, the Minister for Higher Education trundles in on his bike from the government offices in Christiansborg. He parks and gives an interview to TV2 Lorry that are waiting at the bottom of the stairs. 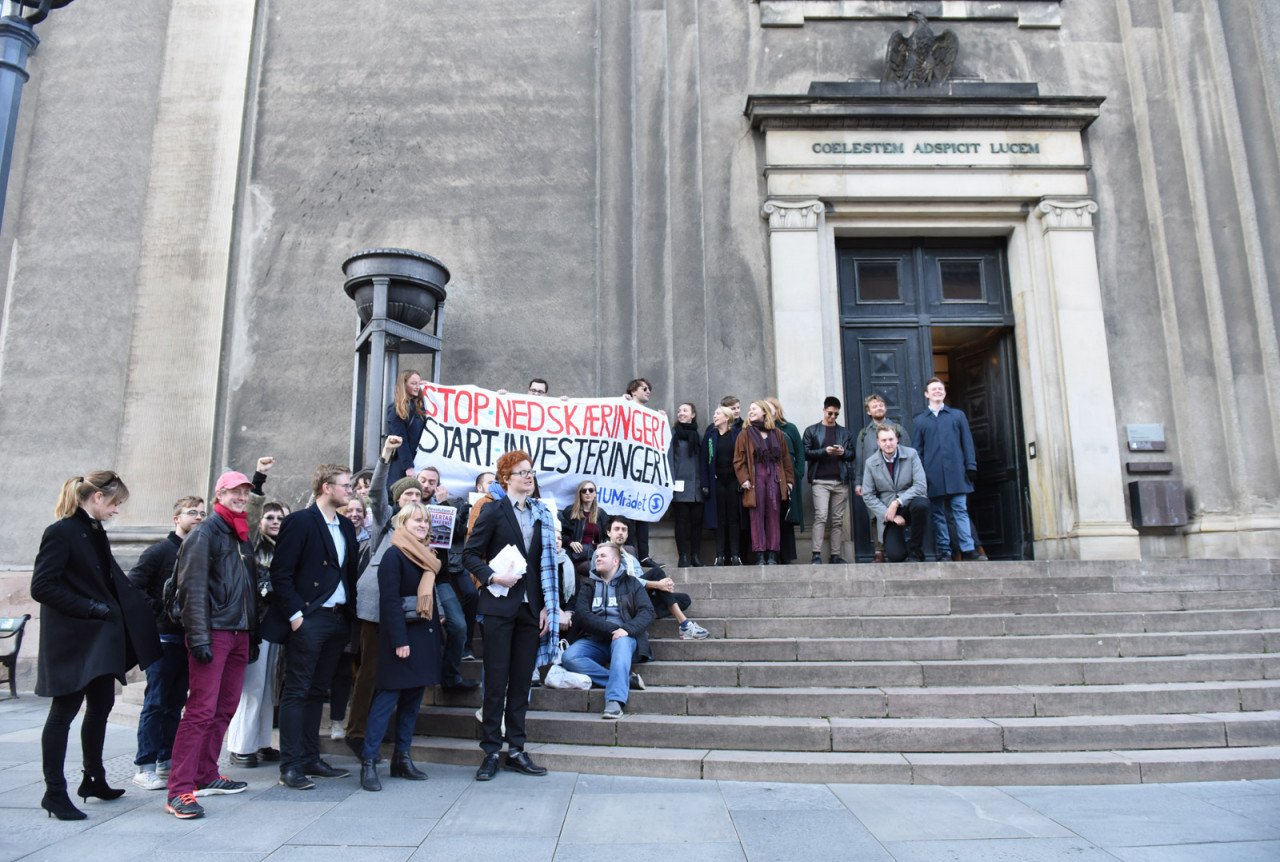 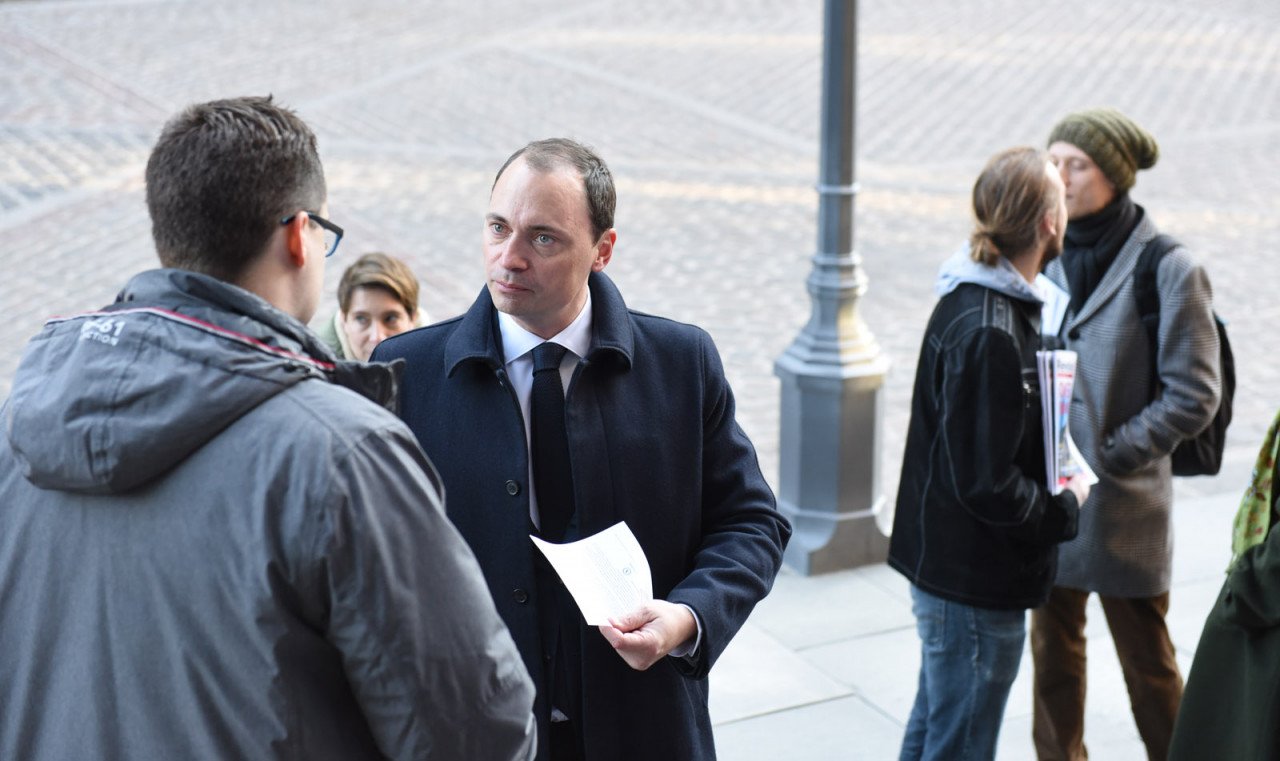 Tommy Ahlers stops on his way to the annual commemoration to talk to the students.
image: Dennis Christiansen 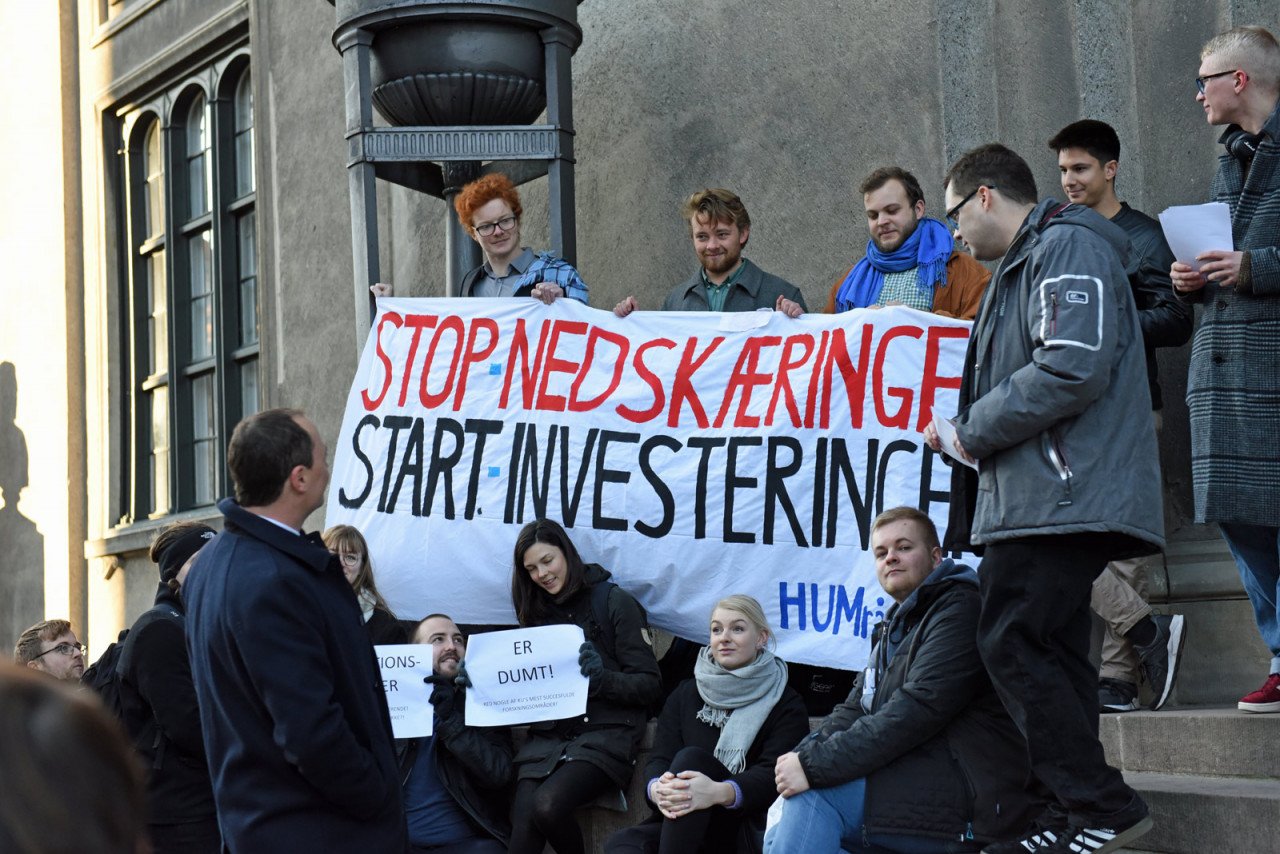 Afterwards, he goes up the stairs and says to the group from the Humanities Council who are still standing with their banner.

“Are we to talk, or are you just going to stand there?”

“If you want to maintain a world-class university, then there is no need to continue to cut back the way you do.”

“But this is what I have fought for since I became minister. That is why we will stop the cutbacks to universities from 2021.”

Niklas Zenius: “But this is too late a deadline. You have already closed down a lot of study programmes, and many of the subjects have to exempt themselves from previous quality assurances.”

Tommy Ahlers: “But I think that management in the higher education institutions does the best they can, with the priorities that they have to make. But we are constantly trying to have a discussion on whether we can do better. We have just had a discussion with all the rectors and chairmen. To find out whether we could find a better balance between research and teaching.”

I think that management in the higher education institutions does the best they can, with the priorities that they have to make.

Nikolaj Zenius: “But as good as they can, is not good enough. The problem is not the internal balance between research and teaching. The problem is that there are too many decrees about what the money has to go to. And on top of that you have to cut … ”

Tommy Ahlers: “Well, now I think you are putting words into my mouth. We are trying to set a financial framework. We have to remember that we are a country that spends more than DKK 14 billion on education, but when we need to cut, then universities have to cut also, I’m afraid. Unfortunately, I have to go in now,” says Ahlers, before he goes in to the main Ceremonial Hall.

Shortly after this, the Humanities Council disperses. The banner is bundled together and they walk towards the Office of the Rector to protest.

Just like the students did 50 years ago during the student protests. Apart from the fact that the action this time is temporary and symbolic, and has been announced to the rector in advance. The secretariat of the Office of the Rector opens the door for the students and has laid out sandwiches and sodas in the empty office. They even offer a glass of port wine as a friendly gesture, and a reference to the sit-in during the student protests when students drank the former rector Mogens Fog’s wine.

While this is all happening, the rector, the Queen and the other guests are celebrating the UCPH birthday in the Ceremonial Hall. In the evening, the celebration continues with a special event for birthday guests at the opera. The protests continue also. The Humanities Council plans to stand in front of the opera with their banners. 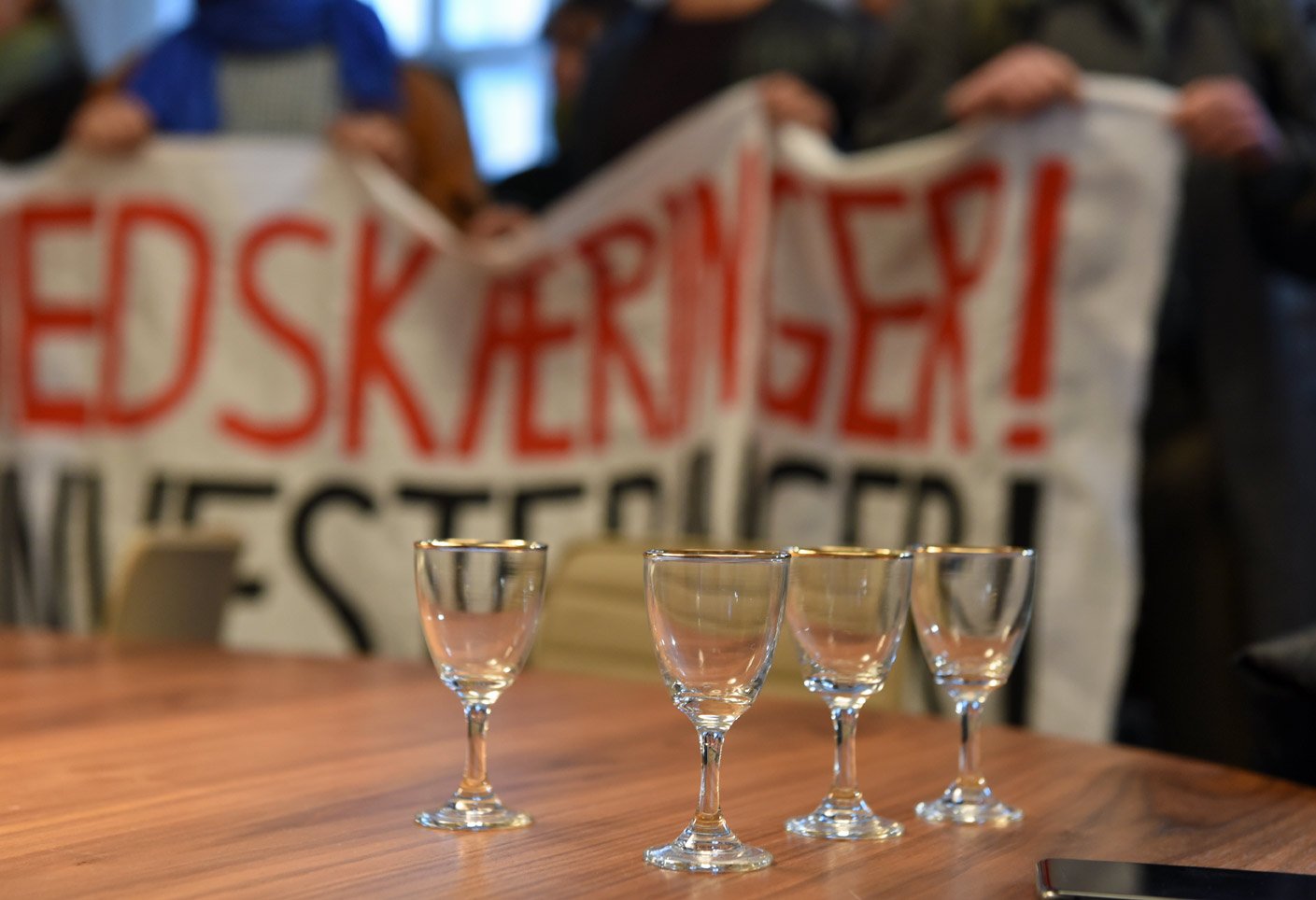 The temporary occupiers are expected. The Office of the Rector offers a glass of port wine as a gesture and a reference to the time when students occupied the office and drank the former rector Mogens Fog's port wine.
image: Dennis Christiansen
Newsletter