Smoke rises from a bin outside the Islands Brygge entrance to Søndre Campus after someone threw a lit butt in it
image: Christoffer Zieler

Chasing smoke — After a proposal last week to force smokers off campus, University Post headed out to the scene of what could become a crime

In her op-ed last week calling for a total ban on smoking at the University of Copenhagen, indoors as well as out, law professor Kirsten Ketscher identified the Islands Brygge entrance to Sønder Campus (South Campus) as one of the smokiest places at the university. To test her claim, University Post sent  to Amager on a cold September day to find out what’s what in the smoking debate.

My first observation: it’s obvious why smokers would choose to huddle around the building’s entrance. In the wind-swept chasm of glass and stone that is Njalsgade and nearby Metro station, the overhang over the main entrance offers basically the only shelter to be had.

Along the building’s façade, about 10 metres or so from the revolving door, a phalanx of bins stands at the ready. They’ve been specially designed to accommodate cigarette butts, but, if a smoker wants to practise their habit and stay dry, there are two options: clump under the overhang or get hold of an umbrella. 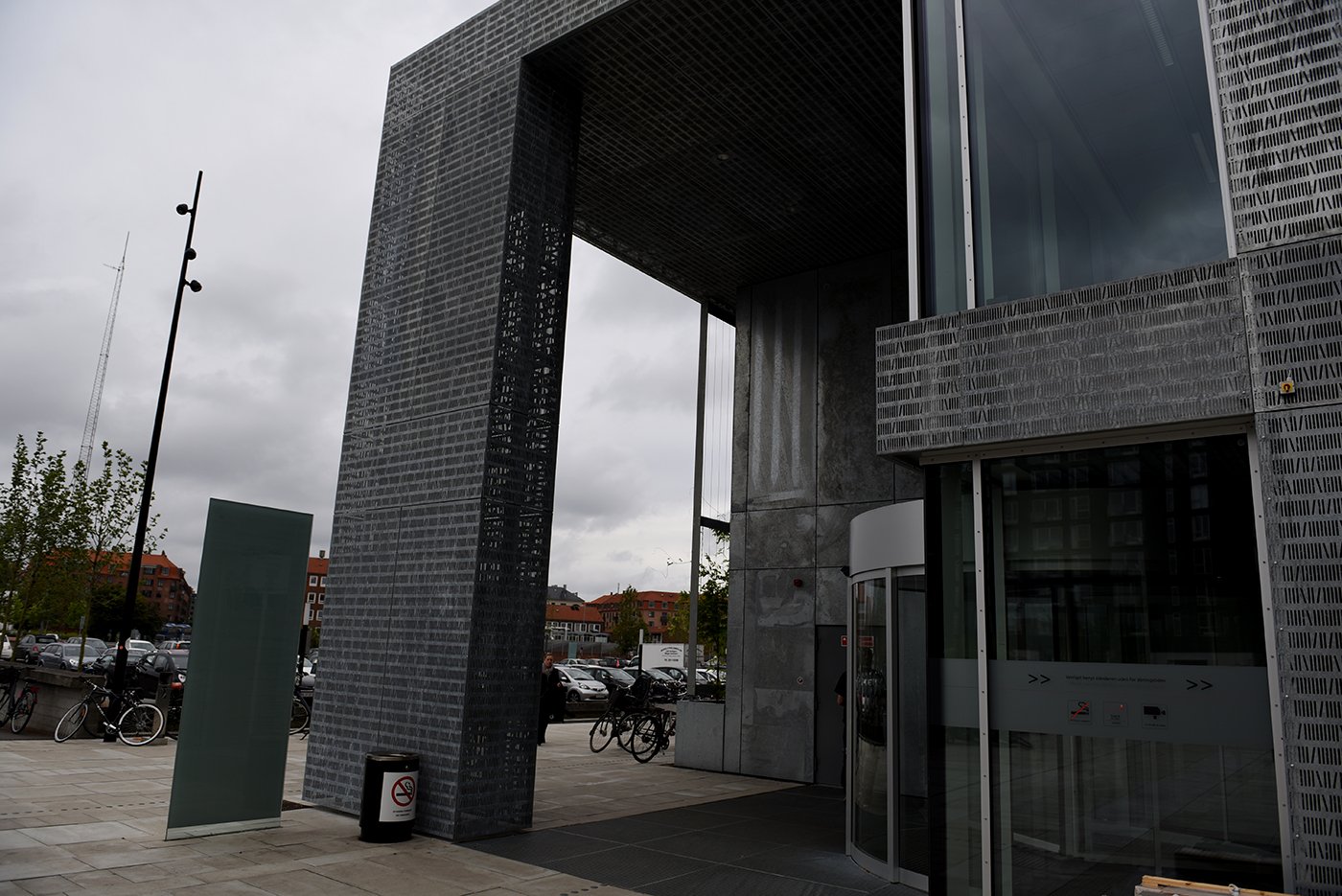 The main entrance to the Islands Brygge side of the building on Søndre Campus is the only place to find cover in the windswept urban chasm. It’s easy to see why smokers prefer to congregate here
image: Christoffer Zieler

When I show up, there’s only one person standing outside smoking. It’s a university employee. She’s sitting on some wooden pallets a few meters from the entrance, in a spot marked as a ‘no smoking’ area.

I ask if anyone ever seems bothered by people standing outside the building and smoking. She laughs and points at herself.

»It’s nice right and clean right now. The groundskeepers were here yesterday to clean up. Normally, it’s a sty. When it rains, it’s even worse.«

A quick look down reveals that the paving tiles are indeed free of butts. But upon closer inspection, you can’t miss the thick layer of filters trapped under the galvanised shoe scraper you have to cross over when you enter and exit the building. Clear evidence that lots of cigarettes get smoked here. 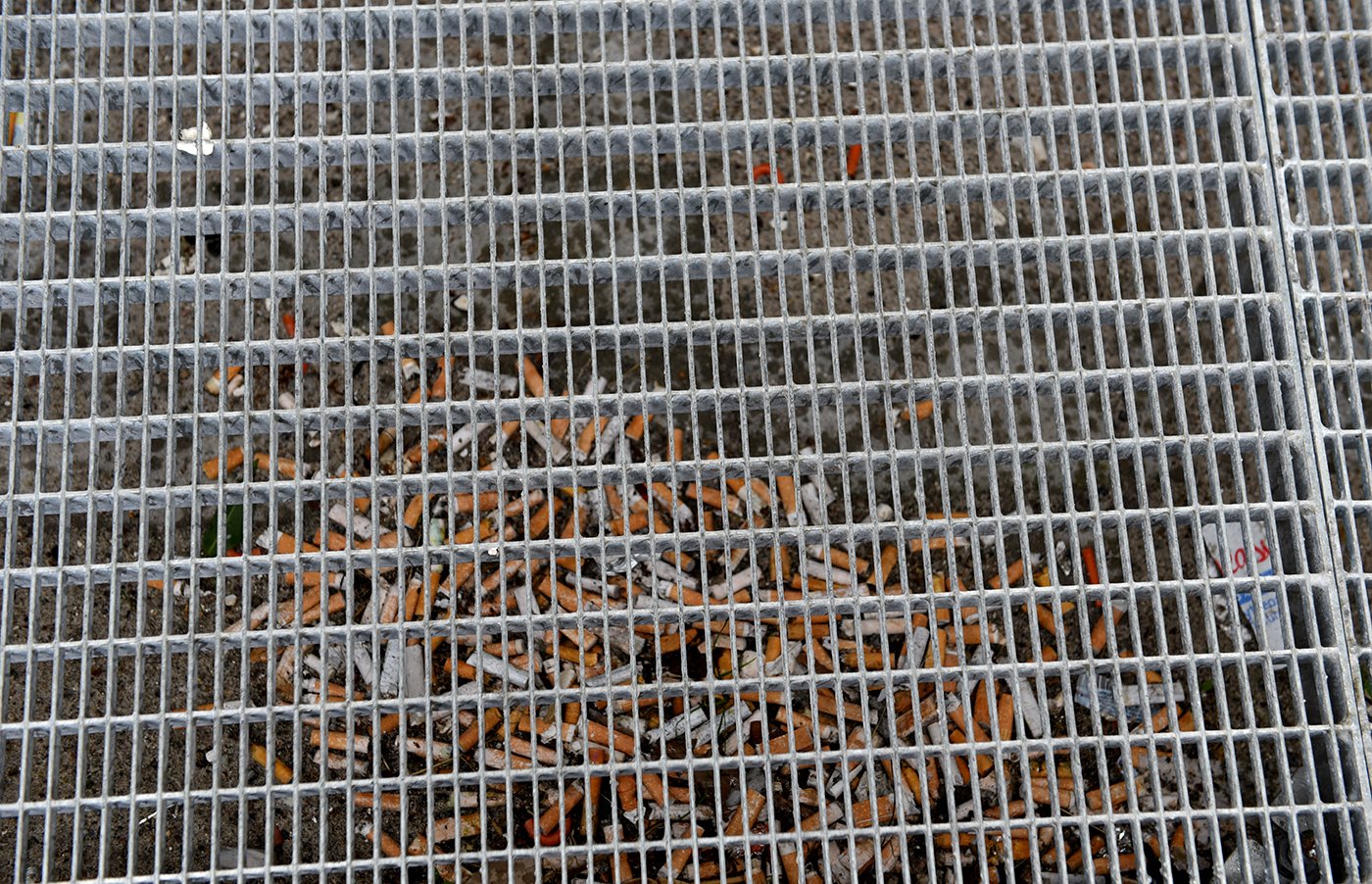 The smokers – men, as well as women – start appearing in earnest during the breaks between classes. (The relative gender balance confirms the official health statistics. According to Sundhedstyrelsen, 17% of Danish women and 15% of Danish men smoke. The number is on the decline, overall.)

Most of the smokers clump in hyggelige groups of two or three. The favourite place to light up appears to be right outside the door. The smoke there is getting thick. It seems Ketscher was right.

None of the smokers are willing to have a picture of themselves holding a fag published anywhere. When I introduce myself and try to talk them about smoking, most respond “oh, no” reflexively. We strike up a chat anyway.

One group of three students from the School of Library and Information Science say they’ve never been told that some people are bothered by the smoke when they enter and exit the building. If they’d said something, they’d probably have tried to accommodate them.

No-one in the group was even aware the area was a no-smoking area. Overlooking no-smoking signs appears to be something the majority of the school’s smokers do. Few say they’ve noticed them, but, once you start seeing them you can’t help but notice that they are everywhere.

The group also admits that their butts wind up on the ground just as often as they wind up in the bin that’s seven or eight meters away from where they are standing.

»Look, the bin’s on fire,« someone behind us says.

Sure enough, greyish smoke is billowing out of the big bin to the right of the entrance. Or maybe it’s just a thick cloud of irony: it has an oversized sticker with a cigarette with a red line over it. It turns out someone threw a lit butt into the bin anyway. Now, its contents have begun to smoulder.

One of the three Library and Information Science students I was talking with before says he’d like to speak up for smoking, but that he wants to remain anonymous.

»We ought to embrace smokers,« he says. »When you smoke, you talk with the other smokers and get to know them better. You meet people who are studying something different than you are. My programme is pretty small, and smoking serves an important purpose for me.«

For the smokers standing outside the buildings of Søndre Campus, it would appear that smoking is something of a club.

The huge cost of smoking

Inside, where the air is warm and clear, four female law students are sitting in a group, laptops open. Personally, they say, they don’t find the smokers bothersome. If people want to smoke, they can do it outside.

But, that’s not the same as saying that the university should tacitly encourage smoking by putting up shelters or windbreaks, one of them says. People’s smoking habits are their own expense, not the school’s.

In search of someone who can tell me more about just what economic impact smokers have on Søndre Campus, I find Stig Freddie Andersen, the campus operations manager.

Over the phone, Andersen tells me that, in terms of the number of hours his employees use to clean up after smokers, the cost is “considerable”.

One of the ways he seeks to address the problem is by trying to send signals to smokers about where they can light up.

»We’ve put up some windbreaks to show where the smoking areas are. We try to nudge people into changing their behaviour. We can’t really do much to prevent them from smoking in an outdoor public space, but we can try to show them where we’d like them to do it.«

Andersen isn’t pessimistic about the effect such efforts have, but he is realistic.

»It’s no different from the population at large,« he says. »The majority, 75 percent or so, respect the rules. The rest couldn’t care less.«

Even so, he says it’s rare anyone – student, faculty or staff – complain about second-hand smoke.

The lack of respect for no-smoking areas appears to be a campus-wide thing. Go out on the rooftop terrace at the Faculty of Law, a quiet little space between two buildings where the staff can sit and relax among rosemary growing in wooden planters, and you can’t help but see the evidence that someone likes to take their smoke break there.

This, despite a no-smoking sign barking in your face. This sign even adds an argument for its prohibition: smoking between buildings is a fire hazard.

The pattern is the same at the  , which houses some of the humanities programmes.

»This is just where you smoke,« says one male student, also part of a group of three smokers, as he lights up a home-rolled fag. The walls of the courtyard where they are congregated are bare, with a single exception: a no-smoking sign. His description of the room’s function is precise though. The ground is strewn with butts.

Just a few steps away, there’s a bin with a built-in ashtray, half-filled with butts.

»That’s a pretty mixed-message, isn’t it,« the guy says, pointing. »They give us an ashtray where we can put out our fags when we’re done.«

I ask what he thinks about the prospect of a campus-wide ban on smoking.

»We’d probably go someplace else, if that were the case. None of us want to bother anyone.«

And what does he think about a full-on no-smoking policy that would ban smoking entirely during teaching hours? Smoker’s disobedience: smoking is banned in the courtyard of Søndre Campus. No, really
image: Christoffer Zieler

By this point, my jacket has started to stink, but I’ve got one more thing I want to look into.

Outside the main entrance to the Generation 2 buildings is another smokers’ hotspot. Even on a damp day like today, there’s a crowd of people all with fags between their fingers or up to their lips, standing there. The difference is that the school has painted a on the tarmac to indicate where smoking is permitted and where it’s haram. Most of the students seem to be staying inside the lines.

As positive as the might seem, the air is still thick with smoke. Which leads me to wonder, about the effect of lines on the ground on smoke in the air.

Lucas, who’s studying religion, has been a smoker since primary school. He’s also against a campus-wide smoking ban.

»By the time you get to uni, you’re a grownup. We should be allowed to make an adult decision and live with the consequences. We’re not children that need to learn what’s right and what’s wrong,« he says.

Besides, he argues, getting a ban to stick would take a lot of effort.

»I reckon it would be a long time before a total ban was fully implemented. Look at the ban in primary schools. That’s not very effective either. If you decided today to ban smoking, it’d be at least a year, maybe two, before you saw it have any effect.« 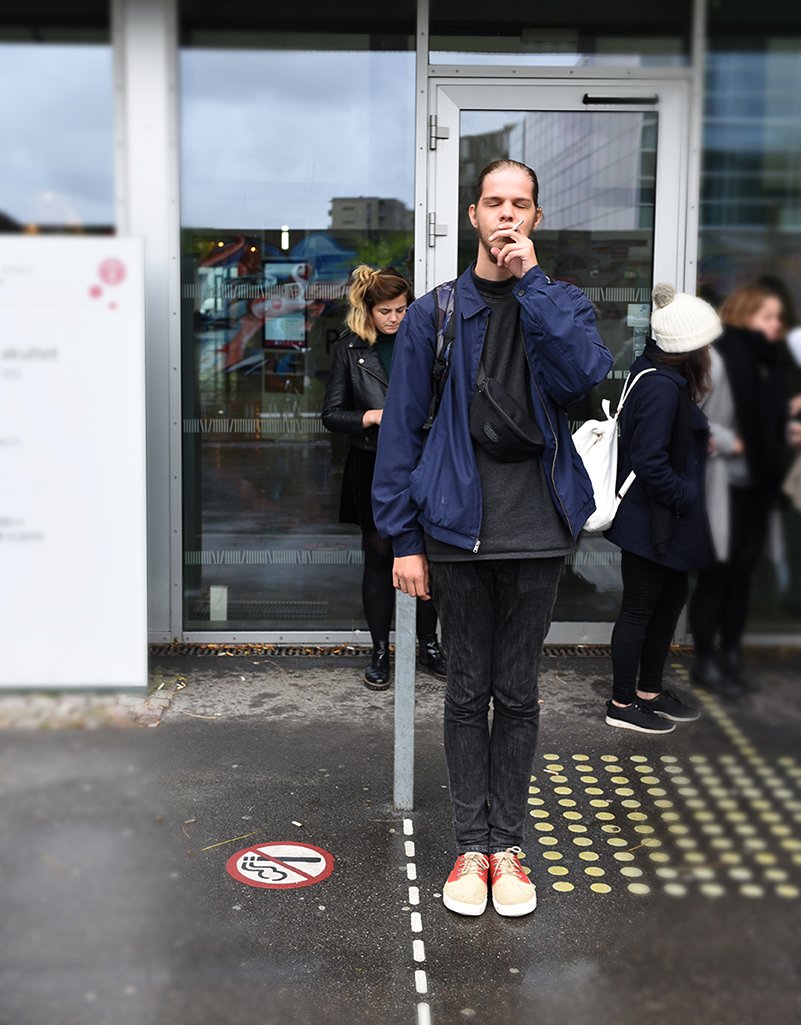 Religion student Lucas and his cigarette are on the right side of the law. But what about the smoke?
image: Christoffer Zieler

Lucas says that he and his mates smoked on school grounds when he was in primary school, even though it wasn’t allowed.

But primary school is one thing. Kids have to go to school. You can’t easily go around expelling them for breaking rules. The university, on the other hand, could.

»It would make no sense for the university to throw people out for smoking during the school day. There are huge costs connected with university education. They’d never throw us out for such a minor infraction.«

Astrid, who’s also reading religion, says it should be the university’s responsibility to give smokers spaces where they can smoke.

»If you don’t want people to smoke somewhere, then don’t put an ashtray there. I’m not the type of person who flicks my butts to the ground. That’s gross. I stand where the ashtray is.«

Things like sheds and windbreaks, she says, can nudge smokers to migrate away from entranceways and other places that non-smokers pass through.

»Smokers look for a place they can find shelter. That’s why we’re here right now,« she says, pointing upwards at the sliver of an overhang that’s providing the smokers below with marginal protection from the rain.

»You do what you can to keep your smoke out of other people’s eyes,« she says.