Window to the past: Natural History Museum of Denmark buys huge amber collection 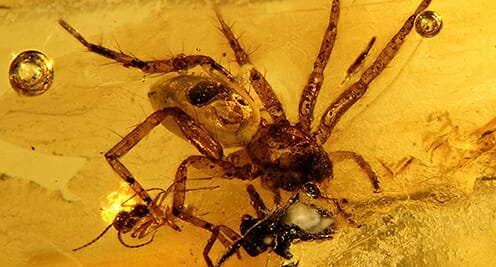 Collection — One of the world's largest collections of amber has just been acquired by the Natural History Museum of Denmark. This means possible discoveries of new species of insects and other biological materials.

The Natural History Museum of Denmark has just acquired one of the world’s largest collections of Baltic amber. It consists of around 60,000 pieces of amber, built up through 40 years by its former owner Karin Nordmann Ernst from the northern Danish coastal town of Skagen.

Amber is especially valuable for science, as it consists of congealed and hardened several-million-year-old resin that can store brand new (old) insect species and other biological materials that strayed into the sticky mass that trickled out of the trees.

The collection is a massive expansion of the natural history museum’s collection of amber, which previously consisted of 10,000 pieces.

Baltic amber emerged in Northern Norway, Sweden and Finland 35-40 million years ago and is the type of amber we see in Scandinavia.

You find Baltic amber on the coasts of Denmark, as it has been transported to Denmark with glaciers up until 10,000 years ago, says associate professor and curator Lars Vilhelmsen, who is responsible for the amber collection.

It is, in particular, small insects like flies and mosquitoes, that you can find in the Baltic amber, but sometimes you can also find mites, wasps and beetles

“It is, in particular, small insects like flies and mosquitoes, that you can find in the Baltic amber, but sometimes you can also find mites, wasps and beetles. You can also find plant residues, the so-called stellate hair, which existed on twigs and the male flowers of the prehistoric ,” he says.

Amber offers an insight into the ecosystems of the past and many extinct species that can be compared to those we know today. There is even amber that is more than , in other words insect and plant species that were encapsulated back in the dinosaur ages.

Why amber was a particular interest of the former owner of the collection Karin Nordmann Ernst, she cannot say. It has more to do with her disposition towards collecting that has led to the amber collection, she says to the University Post:

“I have always worked hard to get more and more amber pieces,” says Karin Nordmann Ernst, who owns a special UV lamp that she uses to collect the amber. The lamp shines white when you come across a piece of amber or plastic between the stones on the beach.

The exact sales value of the collection has not been disclosed:

“Let me put it this way. I certainly don’t have to think about who will give me a bath when I get old. I can pay,” says Karin Nordmann Ernst.

Before the sale she stored the amber collection in her private home in boxes which took up two cubic metres. This was a cause for concern when she was out travelling. It is therefore good to get rid of the collection, says Karin Nordmann Ernst, who will continue to collect amber along her hometown’s coastline after the sale.

The Natural History Museum of Denmark has received financial support from the Augustinus, Knud Højgaard’s and Villum foundations.