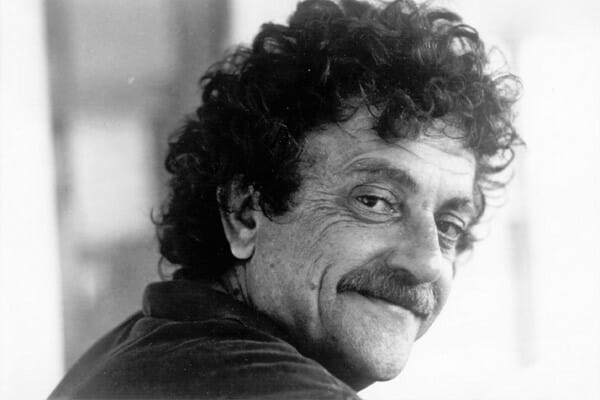 Life advice — Congratulations to the many students whose time at the University of Copenhagen is drawing to a close… but what now? How should you live? Who should you become? Based on a reading of the wise and unpretentious graduation speeches by the now deceased Kurt Vonnegut, The University Post here presents some life advice to the soon-to-be adults.

“Only well-informed, warm-hearted people can teach others things they’ll always remember and love. Computers and TV don’t do that.”

These words are by American writer Kurt Vonnegut, who, unlike most writers, could express deep wisdom through simple language and warm, grandfatherly humour. Not only on computers, of course, but also on the whole human existence in a staggering world.

First rule: Do not use semicolons. They represent nothing other than showing you've been to college.

The speeches held between 1978 and 2004 were valuable enough to be his primary source of income for a number of years. In 2013 many of the speeches were collected in a book with the warm title If This Isn’t Nice, What Is?, and these words are the ones we human beings should murmur to ourselves when we, in glimpses, notice that we are in fact happy.

In the book you can read about universal and timeless life wisdom, but you can also choose to take a short cut by reading The University Post’s loosely quoted summary here:

“No matter what age any of us is now, we are going to be bored and lonely during what remains of our lives. We are so lonely because we don’t have enough friends and relatives. Marriage is collapsing because our families are too small. A man cannot be a whole society to a woman, and a woman cannot be a whole society to a man. We try, but it is scarcely surprising that so many of us go to pieces. So I recommend that everybody here join all sorts of organizations, no matter how ridiculous, simply to get more people in his or her life. It does not matter much if all the other members are morons. Quantities of relatives of any sort are what we need.

As for boredom: We are supposed to be bored. It is a part of life. Learn to put up with it.”

“We are all so close to each other in time that we should think of ourselves as brothers and sisters. I have several children – seven, to be exact – too many children for an atheist, certainly. Whenever my children complain about the planet to me, I say, “Shut up! I just got here myself.”

We are all experiencing more or less the same lifetime now.”

I will tell you how to win love: wear nice clothing and smile all the time. Learn the words to all the latest songs.

“I hope you know that television and computers are no more your friends, and no more increasers of your brainpower, than slot machines. All they want is for you to sit still and buy all kinds of junk, and play the stock market as though it were a game of blackjack. And only well-informed, warm-hearted people can teach others things they’ll always remember and love. Computers and TV don’t do that.”

“Don’t give up on books. They feel so good – their friendly heft. The sweet reluctance of their pages when you turn them with your sensitive fingertips.”

On noticing the good moments in life

“And I urge you to please notice when you are happy, and exclaim or murmur or think at some point, »If this isn’t nice, what is?«”

“Here is a lesson in creative writing. First rule: Do not use semicolons. They represent nothing other than showing you’ve been to college.”

The truth about great art

“One of the principal uses of the arts in this and many other modern countries is to confuse the uneducated and the powerless and the poor. The purpose of the museums and concert halls and theatres and public statuary and so on is to persuade the common people that they are unworthy of holding power or making big money – because their minds and spirits are inferior. Proof of their inferiority is the fact that they are incapable of appreciating great art.

Don’t give up on books. They feel so good – their friendly heft. The sweet reluctance of their pages when you turn them with your sensitive fingertips.

The rich and powerful are even more bored by the arts than the common people. One has only to attend the opera in any country but Italy to know this is so. But they have to pretend to appreciate the arts in order to demonstrate their natural superiority, since they can scarcely demonstrate it in any other way. And I pity them. I am a compassionate man. How much fun can it be, really, to pretend to love Rembrandt’s Aristotle Contemplating a Bust of Homer day in and day out, year in and year out? How much fun can it be to pretend to love the German opera – or War and Peace, which you haven’t read, even though you’re a Russian?”

“I think you should devote your lives to creating something which this planet has never had. The planet will die, if it doesn’t get it now.”

Born into a German-American family in Indianapolis, Indiana.

Studied chemistry at Cornell University from 1941-43.

Volunteered as a soldier for the American army during the second world war and was taken captive by the Germans in Dresden, where he survived the firebombing of the city in 1945, while being accommodated in an underground meat locker called Slaughterhouse-Five

Studied anthropology at the University of Chicago after the war and worked as a police reporter at the Chicago News Bureau. Even though he passed his courses on his master’s degree, his thesis was rejected, so he took a job in public relations at General Electric

He was assigned an honorary degree by the university several years later for his publication of Cat’s Cradle (1963).

In 2013 a number of Vonnegut’s graduation speeches were collected in the book If This Isn’t Nice, What Is?

On how we should treat our blood relatives

“We must learn to deal with one another more frankly and openly, even humorously. But, more important than that, we must learn how to touch. If we are to become a strong and decent people, we must become cousins now – eccentric cousins maybe, but cousins all the same. Blood is thicker than water. Let us learn from the Mafia. It is time, incidentally, that the white people in this country acknowledged that the so-called black people are actually blood relatives of theirs. This is easily proved.”

“I will tell you how to make money: work very hard.”

“I will tell you how to win love: wear nice clothing and smile all the time. Learn the words to all the latest songs.”

On sticking things in your ears

“The only advice my father ever gave me was this: “Never stick anything in your ear.” The tiniest bones in your body are inside your ears, you know – and your sense of balance, too. If you mess around with your ears, you could not only become deaf, but you could also start falling down all the time. So just leave your ears completely alone. They’re fine just the way they are.”