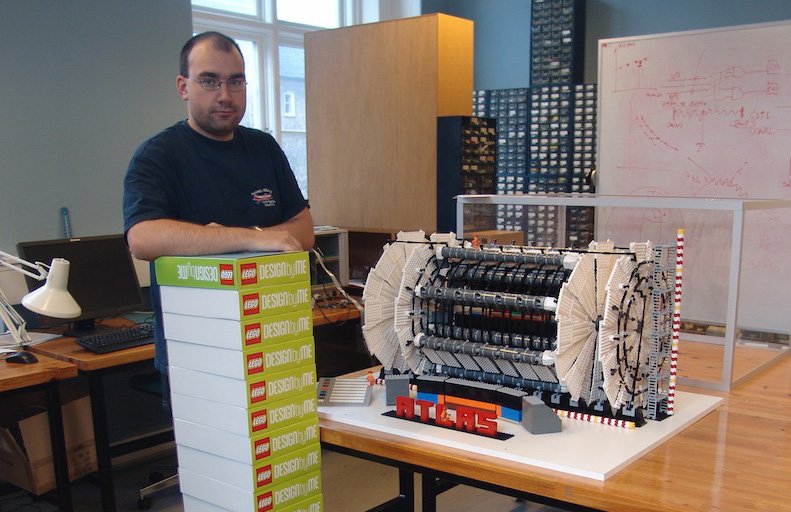 LEGO model of Atlas detector, a part of the Large Hadron Collider particle accelerator. After intense interest online, the model is to go on world tour
image: Sascha Mehlhase

The large model in LEGO of the Atlas detector from the laws-of-physics-busting Large Hadron Collider is now to go on a world tour, says the model’s creator, Sascha Mehlhase. 23,000 people have seen it on UniversityPost.dk

by: Polina Chebotareva and Mike Young

The model of a key part of the laws-of-physics-busting Large Hadron Collider is now to go on a world tour.

This is after it, a 1:50 scale LEGO model of the particle accelerator’s Atlas detector, has become a cult phenomenon on the internet. The model, made by post doc Sascha Mehlhase of the Niels Bohr Institute, University of Copenhagen, was viewed by more than 23,000 people (unique visitors) from throughout the world on UniversityPost.dk after being linked on international physics and technology blogs over Christmas break.

»The LEGO model has attracted the attention of many. But to be honest, I did not expect this much attention,« he says.

It was just for ‘outreach’ purposes

The real Large Hadron Collider at CERN in Geneva is the world’s largest particle accelerator and made headlines recently with its hunt for the the elusive Higgs boson ‘God’ particle. Just before Christmas, the University Post found out that Sascha Mehlhase had made a scaled LEGO model of a key part of the huge accelerator, the Atlas Detector.

Since then, the LEGO model has become an internet sensation, re-published on at least 21 online news sites, and with its own, viral, life of it’s own. However, this is far from what Sascha, who is currently working on particle physics connected to the Atlas detector, expected.

»My research group and I wanted a model of the Atlas detector for our outreach activities, but all the existing models cost more than we could afford, so we decided to build one of LEGO,« Sascha explains.

Model for CERN and for world

»Right now we are planning a world tour for it within the Atlas collaboration. First stop will be Australia,« he says.

With the large model subsequentlty exhibited at CERN’s Atlas exhibition, the mini-model will also purchaseable at the gift shop.

»The mini model will be 30 cm in length and thus have a scale of roughly 1:2000« Sascha explains. It consists of 493 LEGO pieces and will take approximately 90 minutes to build. As of now only one mini model has already been made.

A picture of the mini-model can be seen here: Last picture in the gallery.

A price to pay

»Before I put together more models, I am waiting for an answer from LEGO. I am interested in a collaboration and a potential sponsorship« Sascha explains.

Sascha now receives daily e-mails from fans, some of which he must disappoint. The large-scale model, the one that has been the object of cult interest on UniversityPost.dk, has a price tag of EUR 2,000, according to Sascha Mehlhase.

A pricey buy. The University of Copenhagen has not yet contacted Sascha with any requests.

Who are your customers, so far?

»I have been contacted by institutions within the Atlas collaboration from all around the world. This morning I received an e-mail from Scotland. I have also talked to institutions from France, Germany, Australia and USA« Sascha explains. »And then there is of course the world tour«.

»It would be great to be a permanent part of the ATLAS exhibition, where more people can see it, and it looks good,« Sascha explains.

»We do not need it on a daily basis. But for occasional outreach activities such as Copenhagen’s Night of Culture, I would like to see it temporarily at places in Copenhagen, outside of our institute … so that local people get attracted to our research,« he says.

With such success in combining physics with LEGO craftsmanship, we wondered whether Sascha has plans to make a model of the whole Large Hadron Collider. The whole LHC includes a massive circular tunnel 27 kilometres circumference, 50 to 175 metres under the ground.

But this would be pointless, he tells us.

»The scaling of it would have to be so large, that most details would be lost. And it is the details that are important and interesting in such models« Sasha explains.

»But I cannot rule out making some of the other LHC particle detectors or magnets.«

»I am also working on a video instruction manual, so it will be possible to build a model yourself. This is, however, still work in progress«.