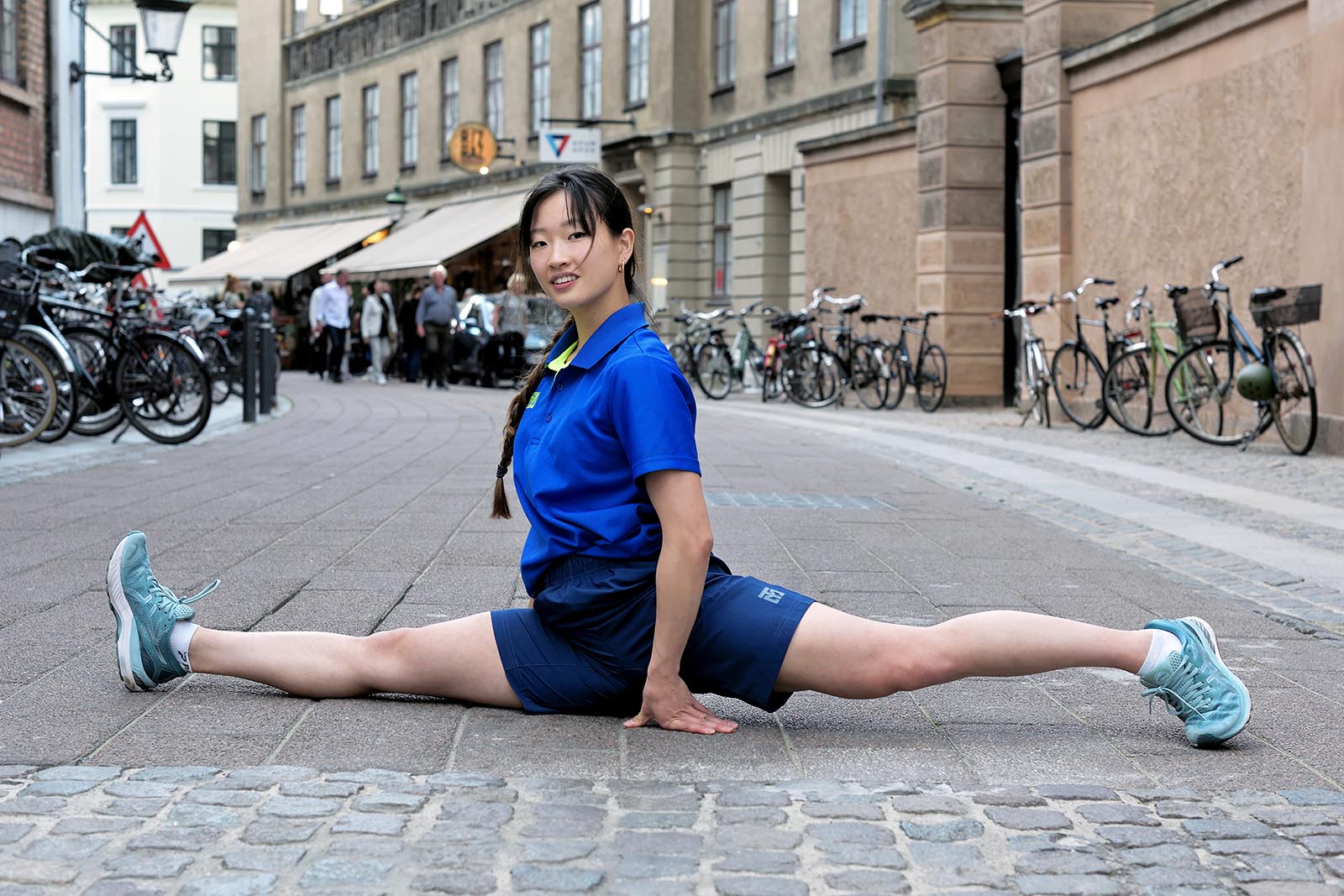 You need strength and agility for taekwondo. Eva Sandersen has practised taekwondo since she was nine years old. It has given her the self-confidence that she did not have as a child, it has led to friendships, and the energy to cope with a university degree programme.
image: Anders Fjeldberg

Discipline — The University of Copenhagen has a women’s world champion in taekwondo as one of its students. Eva Sandersen is a student of pharmacy and balances her demanding sport with a full-time degree programme.

Eva Sandersen has a passion: She is a dedicated athlete. And at an event in Korea this spring she became world champion in taekwondo.

She is also studying to become a pharmacist at the University of Copenhagen (UCPH). This is time-consuming, so how does she manage to prioritise between her sport and her education?

»I like to push myself, and I train with high intensity and am very disciplined,« says 21-year-old Eva Sandersen.

The taekwondo, however, takes up most of her attention, so how does she motivate herself to also be a model university student?

»I have always liked the natural sciences, and in this way pharmacy suits me. But I also acknowledge that there is prestige in being educated. But I do however feel that my taekwondo is more important than my study programme,« says Eva Sandersen.

The worst thing that can happen to Eva Sandersen is if she for some reason can’t train. This happened when she in February 2020 ruptured an Achilles tendon during training.

»I couldn’t practise taekwondo for six months, and this is really hard when you are in to the sport as much as I am. My education programme is just something that I prioritise less – and it is not in the same way directly affected by an injury,« says Eva Sandersen.

It is also the taekwondo that had her working with her own personality:

»I have built up my whole life around taekwondo, and it has made me become the person that I am today. My sport means a lot to me in this way also,« says Eva Sandersen.

Eva Sandersen started doing taekwondo when she was only nine years old. And the sport has therefore had a larger impact on her life over the last 12 years than her pharmacy study programme, which she only started last year. 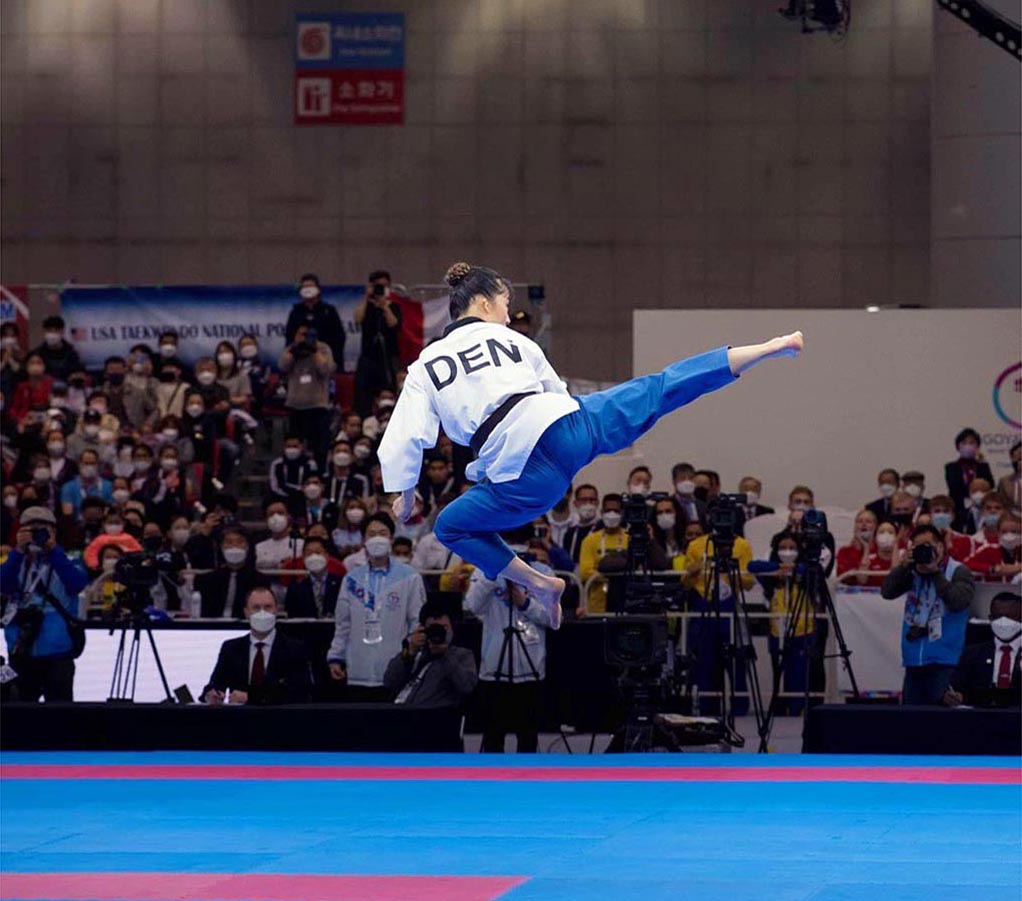 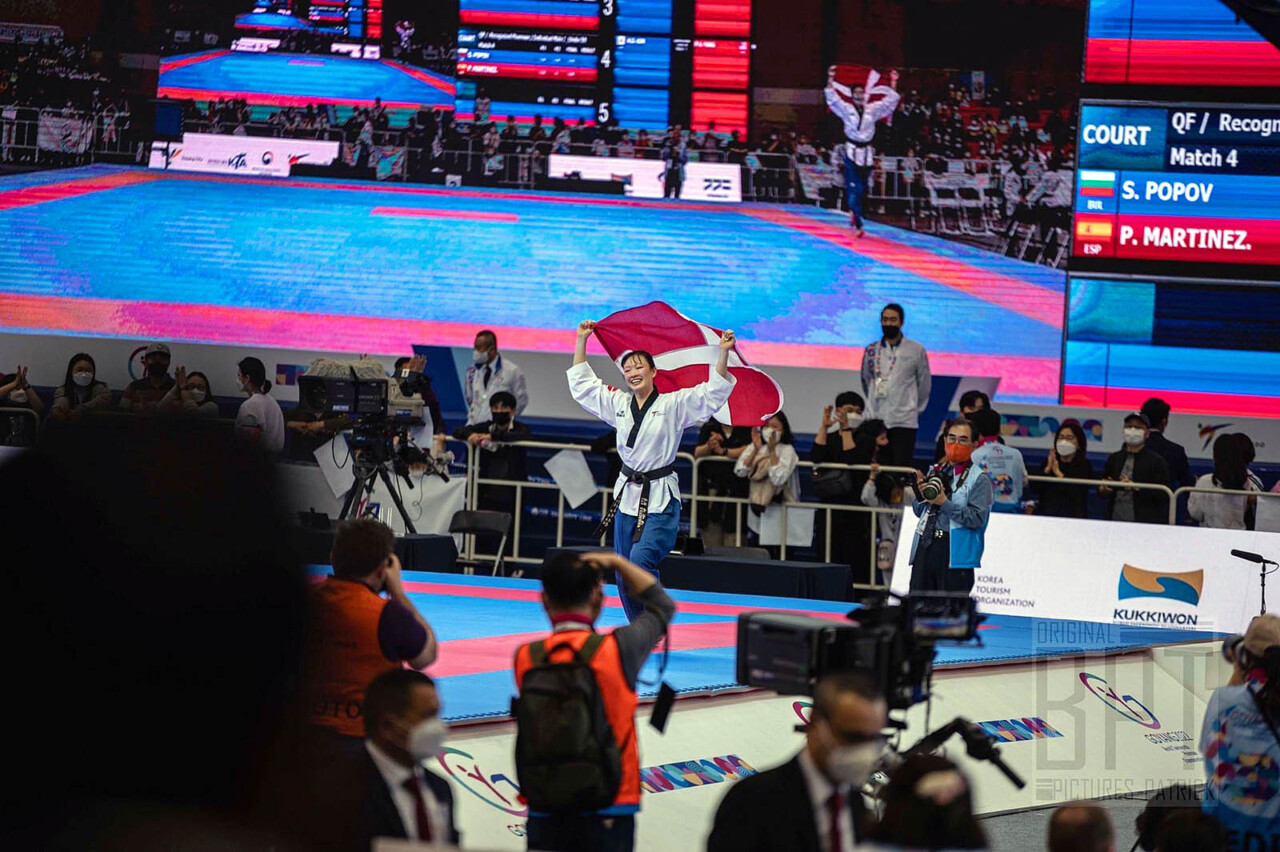 ... which she won, allowing her to consider herself the world's best female taekwondo fighter.
image: Henrik Ladegaard Pedersen

As a child, for some reason, she did not want to talk to other people. But taekwondo changed her. She became more social and engaging with other people.

»As a young person I was very uncertain and shy, and I thought I was unintelligent and would never be good at anything,« says Eva Sandersen.

No café visits after lectures

She sees her classmates when they prepare for their exams together. She sees them, of course, at lectures also. But she doesn’t have time to go to a café with them after classes.

TAEKWONDO WITHOUT hitting ANYONE

The branch of taekwondo Eva Sandersen practices is called poomsae – which means ‘technique’ or ‘form’, because the referee assess them on execution and expression.

Her taekwondo is therefore not about physically winning over an opponent. This is why the pictures from her training and her events do not have Eva Sandersen alongside other taekwondo fighters.

This is what it was like when she went to school also. And it has never been a problem for Eva Sandersen, because her fellow students understand her choice.

»I get so much feedback from my trainer and my taekwondo teammates, and I get a lot of new international friends via the events that I take part in around the world, so I have a good social life,« says Eva Sandersen.

She usually only gets home at 10 pm, because her daily life is so busy. She has a boyfriend who also practices taekwondo and is just as busy, and this is both fortunate, and a necessity if she is to have a boyfriend at all:

»I don’t want to give up my training for the sake of my boyfriend, so it’s good that he’s also really into taekwondo,« says Eva Sandersen.

Pharmacy and sport may, in fact, be a good fit
Eva Sandersen thinks that she can make the link between her pharmacy programme and her sport some time in the future, however.

»I can use it to work with sport and athletics. I could, for example, investigate something about doping, or use it to treat asthma among athletes,« says Eva Sandersen. 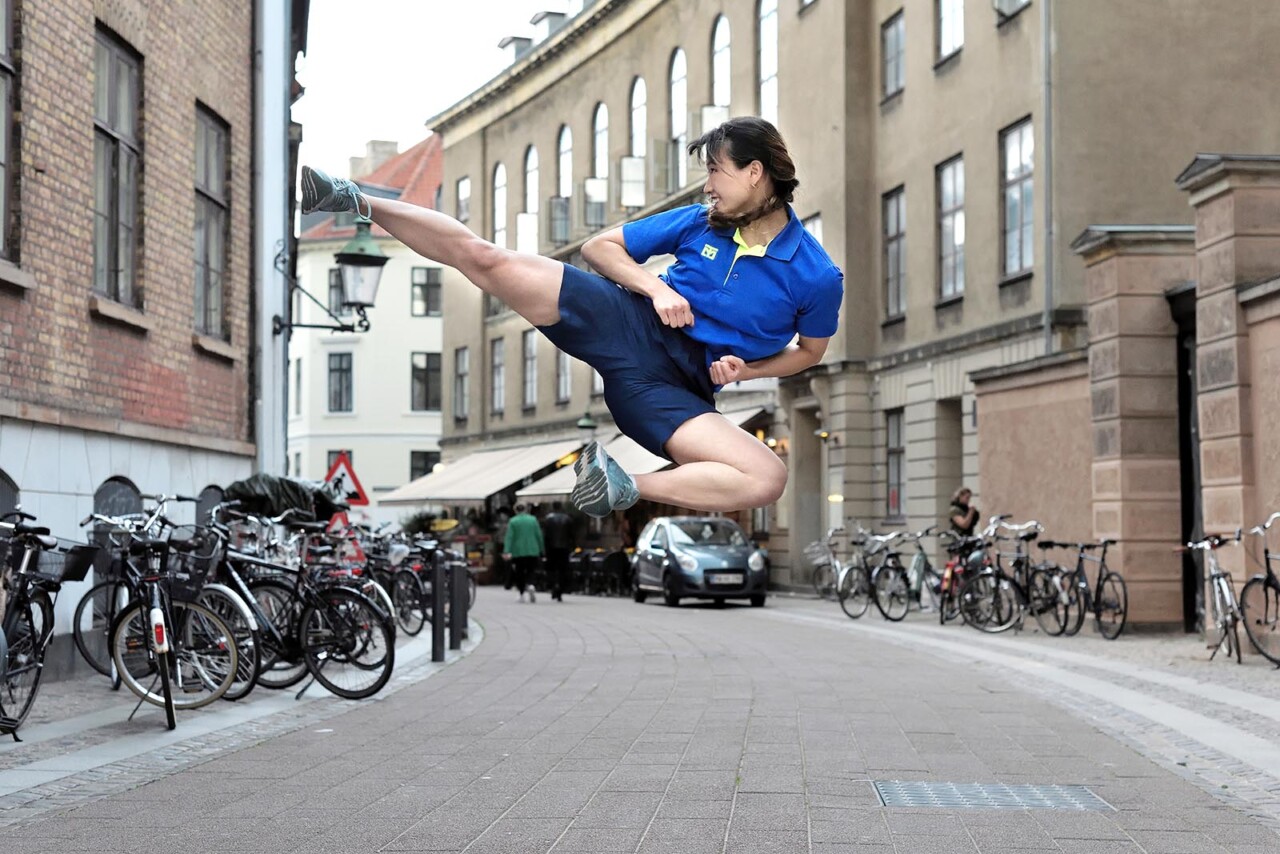 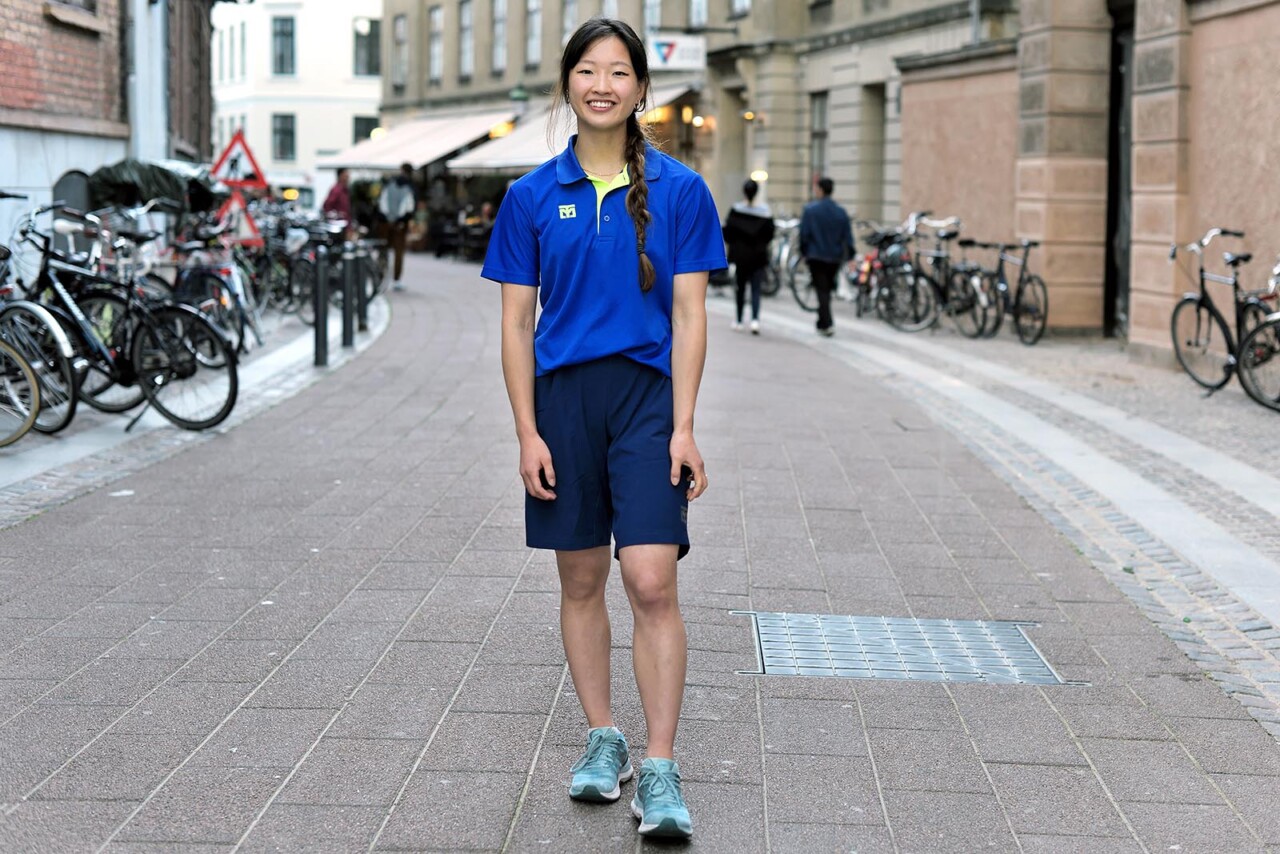 The photos here were taken on an evening where Eva Sandersen had already been at an exam, and at taekwondo training.
image: Anders Fjeldberg

There’s not really anything that can stop her from training. She has asthma and has had it since she was 11. But just like the ruptured Achilles tendon – and a host of other challenges on her taekwondo path – this has not stopped her.

Her attitude towards herself changed however after the ruptured Achilles tendon one and a half years ago:

»Before this incident, I said nothing if something hurt. My Achilles tendon hurt for six months before it ruptured, but I didn’t say anything about it to my coach. And when I got asthma as an 11-year-old, I just ignored it. It was not until my parents discovered that I couldn’t breathe that something was done about it. Today, I try to say so if something hurts,« says Eva Sandersen.

Eva Sandersen knows what she wants:

She also hopes to get some sponsors, because at present she hardly gets any sponsor funding – not for airline tickets or for anything else.

One thing is more important to her, however, than sponsors:

»I would like to be a taekwondo world champion that other people consider pleasant to be with. I want people to look up to me for my hard work and my resolve, and not just because I’m technically good at taekwondo,« says Eva Sandersen.