»YOU should move instead!« Students protested against Danish university relocations

Kitt Mørk, who has just handed in her master's thesis on history, turned up for the demonstration with a placard.
image: Rasmus Friis/Uniavisen

The relocation agreement will destroy the future prospects of young people. This was the message from angry students who demonstrated in front of the Danish parliament buildings at Christiansborg. According to the organisers, there are more protests on the way.

Kitt Mørk is in front of the crowds of people, hugging the placard that she made the night before. On it, she wrote the first thing that occurred to her: »YOU should move instead!«

It is directed at the politicians in parliament who are behind the agreement to relocate study spaces from the larger Danish cities out to the provinces.

And it expresses what she feels:

»I am angry. I’m actually angry. Angry and disappointed,« says Kitt Mørk who, only a few weeks ago, completed her degree programme in history at the University of Copenhagen.

It is a feeling shared by many of the people standing around her. About 100 students were present at on the square in front of the Danish parliamentary buildings on Wednesday 12 January to air their dissatisfaction with the relocation agreement. Gentle singing was interspersed with fiery speeches.

The demonstration took place on exactly the same day that the universities sent in a joint, comprehensive, plan to the ministry on how they will meet the reduction requirements imposed on them by the politicians. A plan that will cut back far more student places than they will relocate.

The same message comes from the only politician on the rostrum, the Social Liberal Party’s education spokesman Katrine Robsøe, which is one of the few parties that are not supporting the relocation agreement. 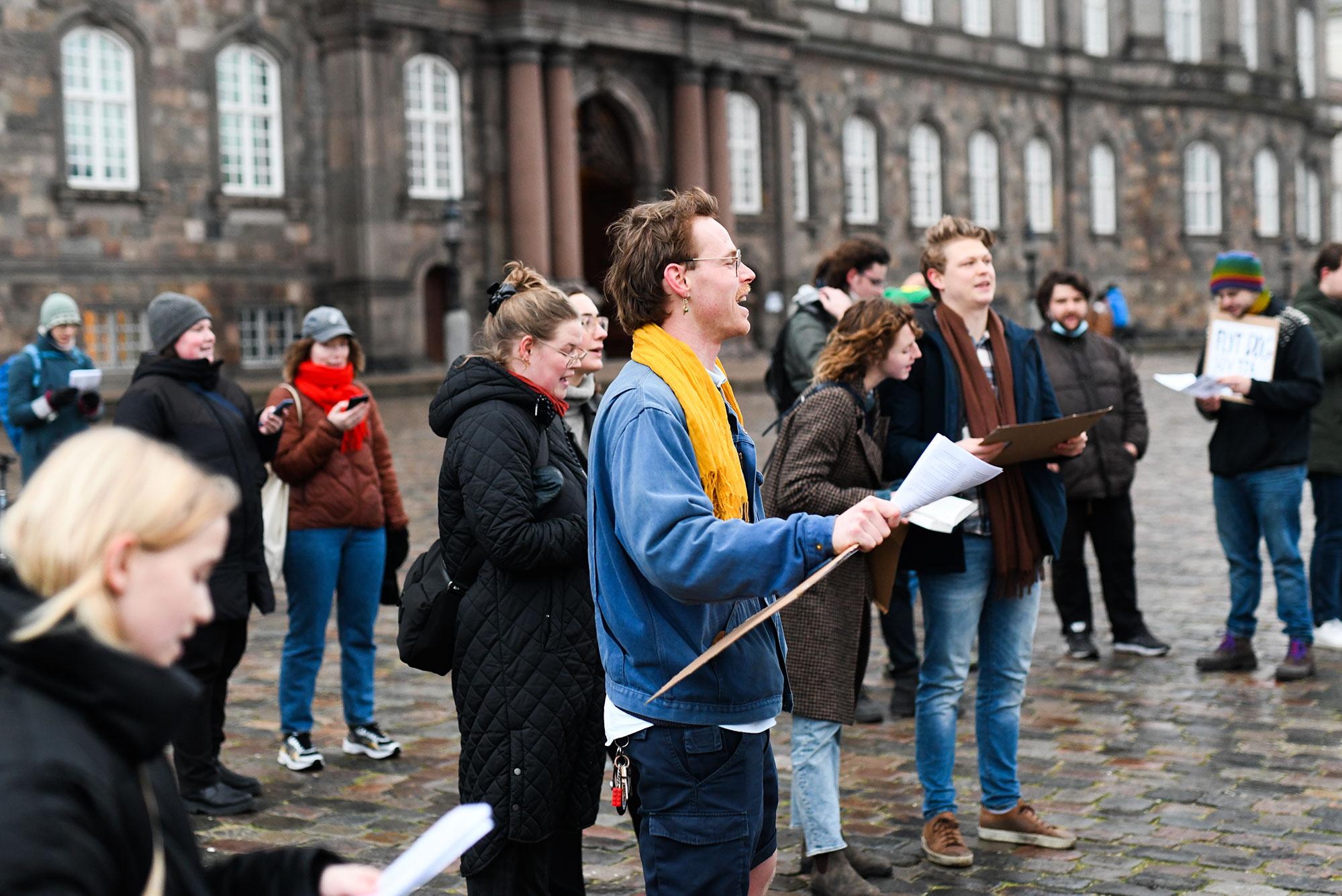 »I frankly feel sick when I see the number of education programme closures come in. I see thousands of study places closing down, thousands of young people who are having their dreams ruined, just because that dream happens to take place on one of the larger cities,« she says.

»We will just not put up with this any more«

Kitt Mørk yells her approval from the front row.

Together with a group of other students from the movement calling themselves Student Revolt ’22, she has helped organize the demonstration, and not just in Copenhagen: In Aarhus, about 55 students are protesting against the relocation agreement, while slightly fewer appear in Odense, approximately 20-25 students. This is confirmed by the local organisers.

They have all turned up in spite of exams and the biting cold of January.

»We are here to show that enough is enough,« says Kitt Mørk, while her fellow protesters sing a song from the canonical Danish Højskolesangbogen – homage to that philosophy of character-building that they believe is under threat.

»The relocation plan is just the most recent example of reductions and cutbacks in education policy. Now we say no more. We will just not put up with this any more. That’s why we call it a student rebellion, and not just a one-off demonstration.«

Lasse Pedersen, psychology student at the University of Copenhagen and one of today’s speakers, makes the same analysis:

»It’s as if this is the straw that breaks the camel’s back.« 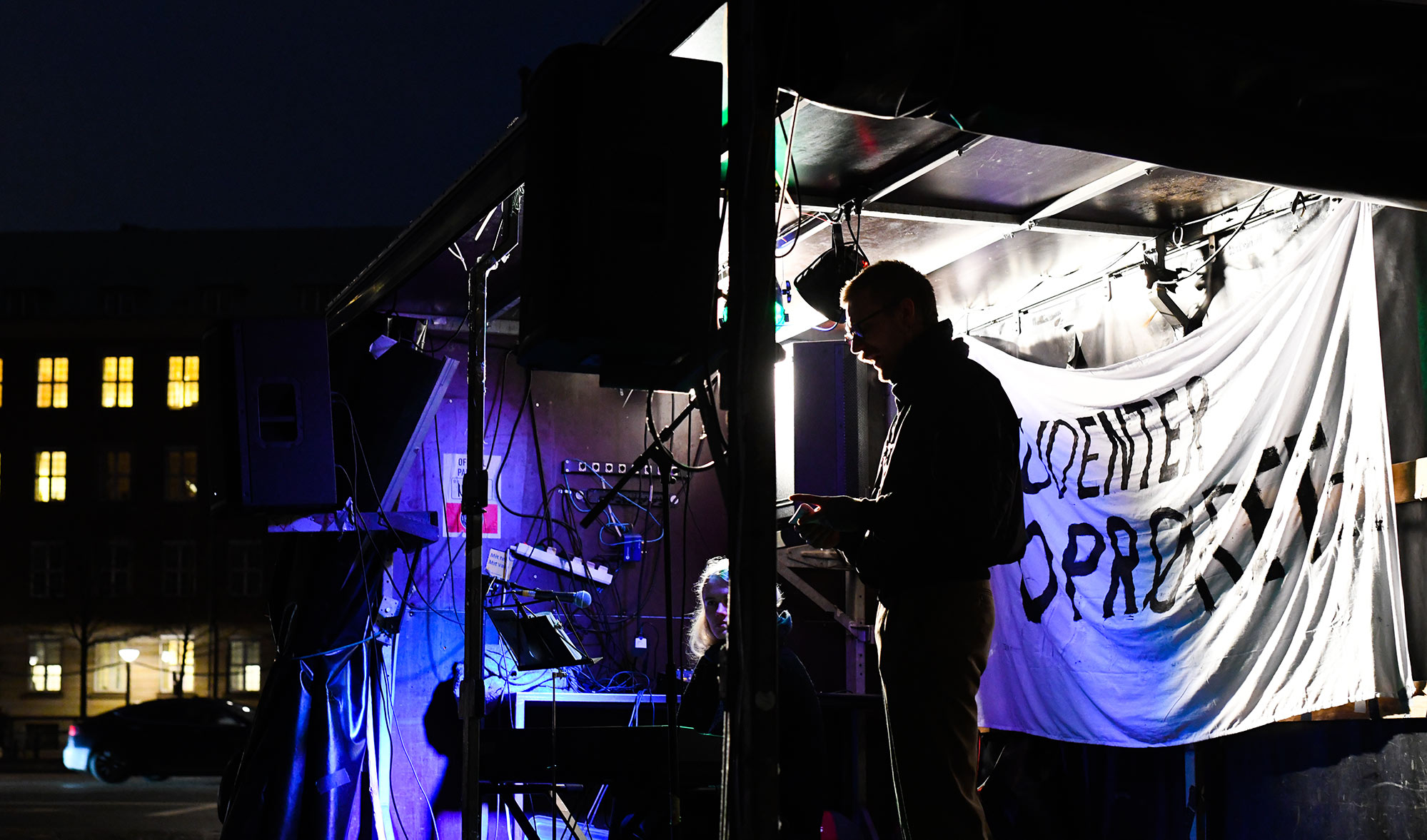 Later, he incites the students’ fighting spirit from the rostrum:

»We have to dare to say no, just like we are doing today. We should not accept something just because a university management, a dean, or a politician says it,« he roars.

»The next time someone says you are unrealistic or that you do not know your place, smile and say thank you for the compliment.«

He gesticulates to the audience and provokes a collective »yeah!«

The protests appear to be transcending political divides on the square.

Anders Mortensen, who is on the University of Copenhagen’s Board as a representative from the Student Council, Rasmus Pilegaard Petersen, chairman of Djøf students union, and Steffen Sjørslev from Conservative Students have all turned up to protest against the relocation agreement. 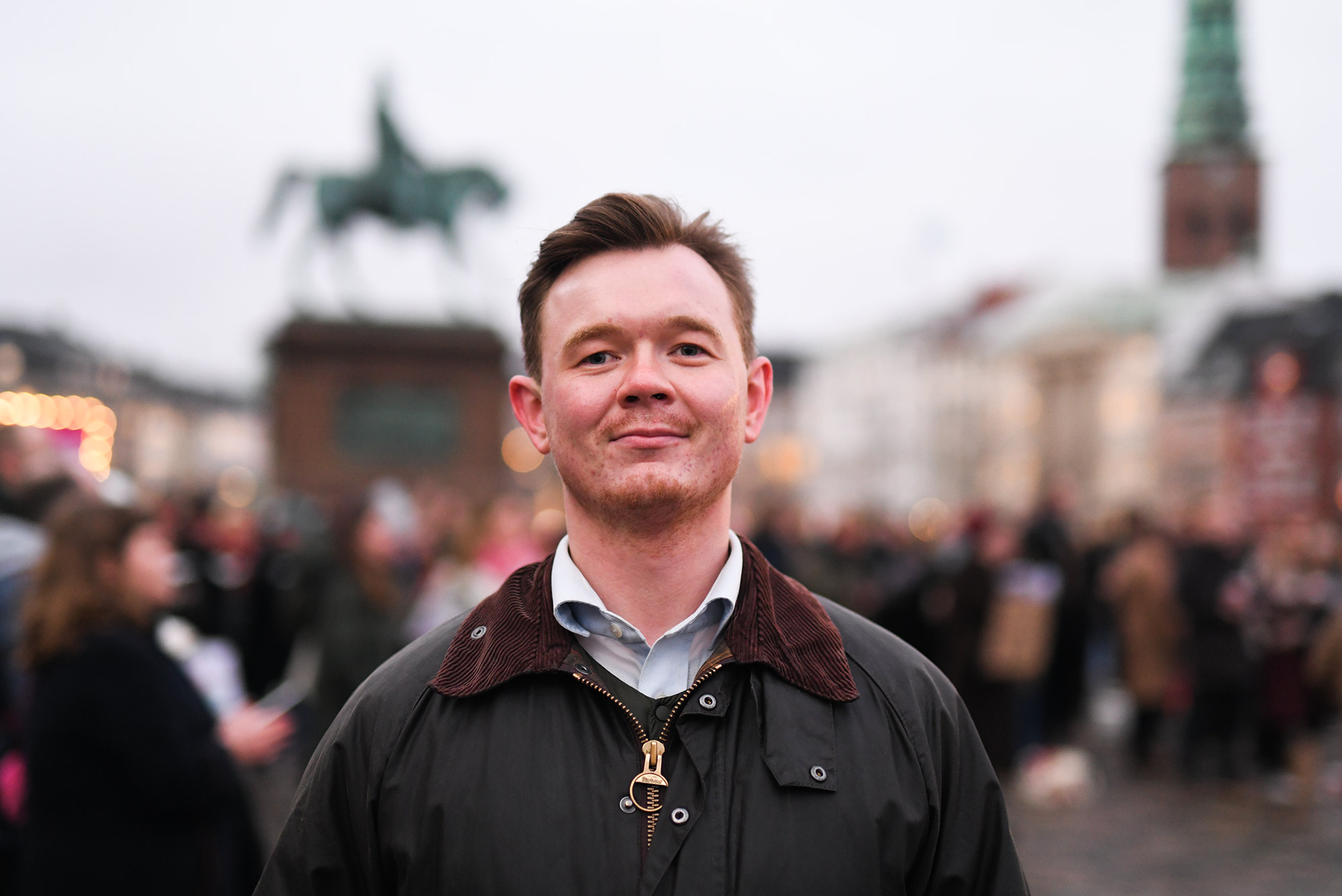 Anders Mortensen, board member at the University of Copenhagen for the Student Council.
image: Rasmus Friis/Uniavisen 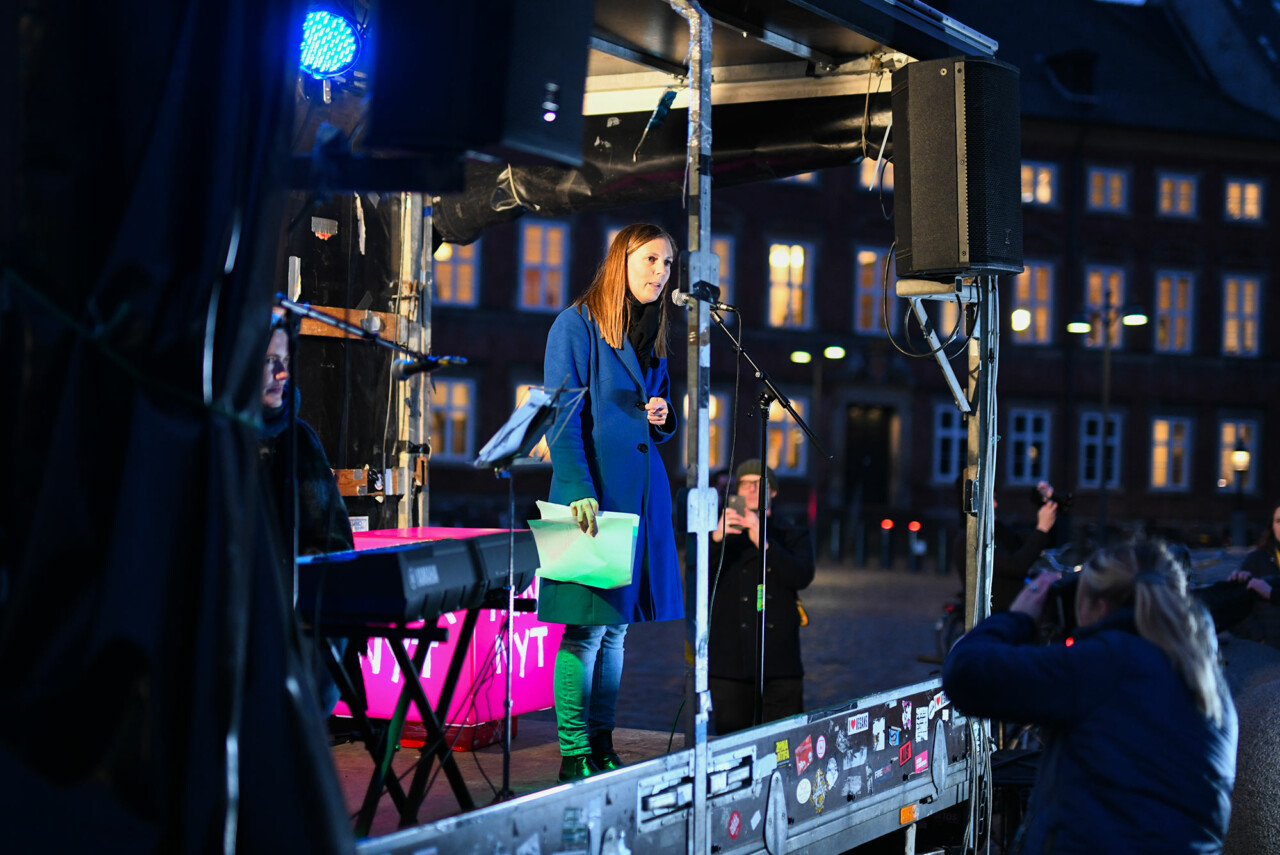 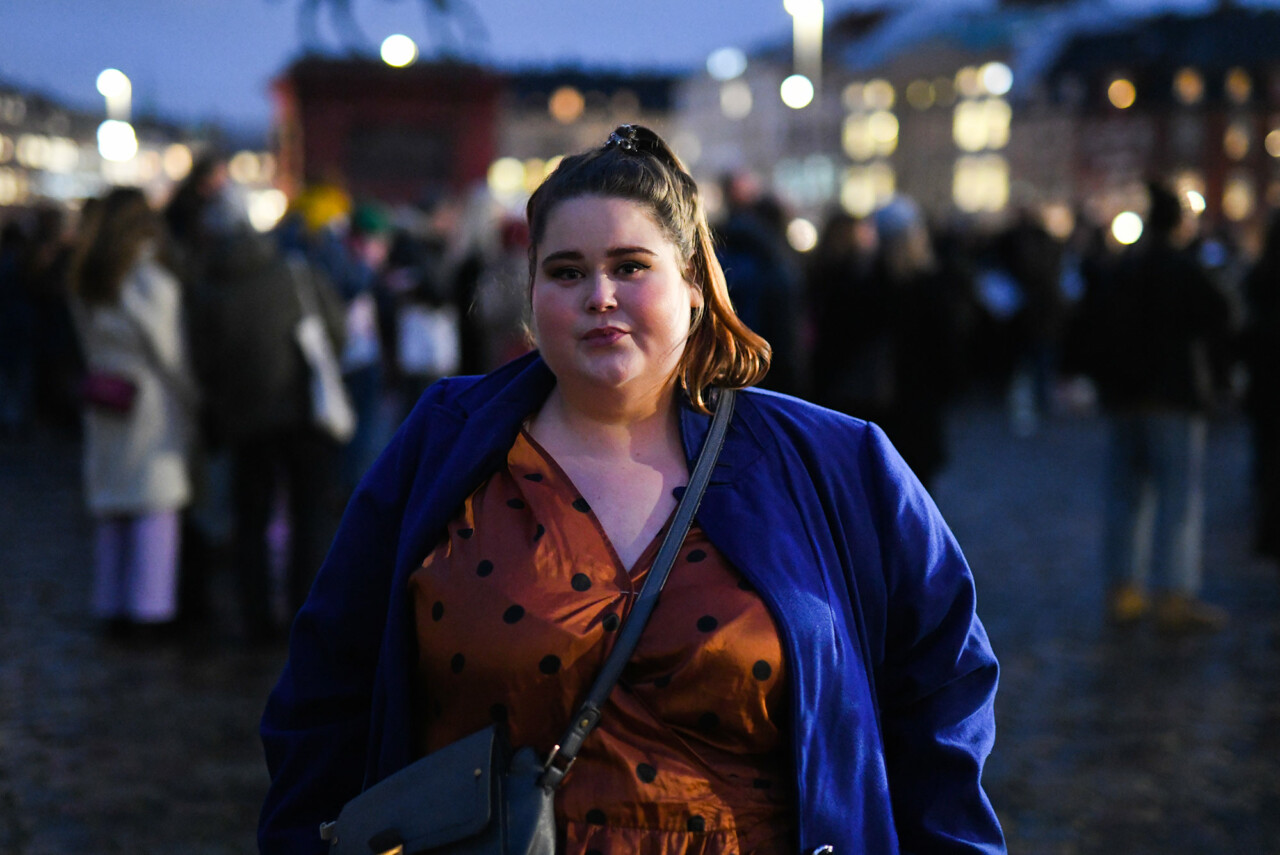 Elizabeth Nielsen, a former student at the soon-to-be-discontinued degree programme in political communication and management at CBS.
image: Rasmus Friis/Uniavisen

None of them are a part of the student rebellion, but they all praise the demonstration.

»When we agree on something, we must stand together. And the relocation agreement is a political project that has failed,« says Steffen Sjørslev, with reference to the fact that most of the student places will be cut, not relocated.

»I think it’s important that we send a signal that it’s a bad deal. It is fantastic to see students defending their degree programmes and what they believe in,« says Anders Mortensen from the Student Council.

The students will continue to do so. Certainly if you ask Elizabeth Nielsen whose programme in Political Communication and Management at CBS is to be axed as a result of the relocation agreement.

»It’s rebellion season,« says Elizabeth Nielsen after she has delivered her speech from the stage.

»There is going to be much, much more.«